Kelly is very good about being a consistently thoughtful friend. Whether it's for a bday, housewarming, or a promotion, she always takes the time to give a little gift or card.

I, on the other hand, usually never remember to do any of those nice things. So, when Kel's birthday rolls around, I really have to step up my game.

Last year, I put together a champagne bar for her golden birthday. This year, Kel has to work on her real bday (today!), so she gets two mini-celebrations. The first took place last night at our Bachelorette viewing party.

A group of our girlfriends take turns hosting viewing nights and there's always dessert and wine. Most of our Bachelorette girls live out toward Beaverton/Hillsboro, so combining Kel's bday with my turn to host ensured that they would all make the drive out to my house in NoPo (sneaky, I know!).

Wine is a must-have at our viewing nights, so while I didn't want to mix things up too much, I also needed to find a way to make the wine feel a bit more special. Rosé slushies to the rescue! 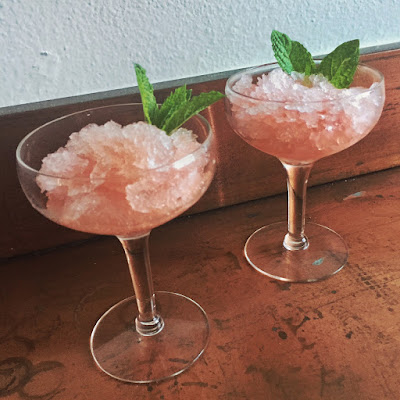 These are the easiest things to make ever.

Step 1: Choose a sweeter rosé
(The rosé I chose was on the dry side and since we're used to slushies being made with super sugary syrup, it felt a little odd to be drinking something so tart in slushy form.)

Step 4: Serve in a coupe glass with a sprig of mint or a few raspberries

To accompany our slushies, Doug made lemon bars, Kel's favorite dessert. (I had to work later than expected or else I would have made them, mmmk?!)

What's Kel's second mini-celebration, you ask? We're hoping to float the river on Saturday, but the weather is not cooperating... cross your fingers that the sun stays out for us!

Not to brag, but Kel and I have been really good about going to happy hours recently. I mean, that is kind of our thing so it's probably not that boast-worthy... but we're still pretty jazzed about it. 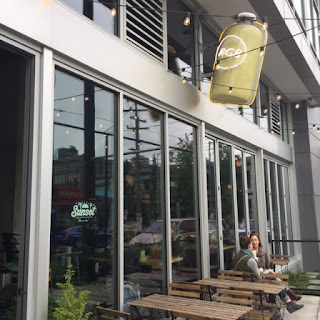 Rachel's Ginger Beer got its start selling artisanal ginger beers at Seattle farmers markets before opening up brick and mortars in Pike Place and Capitol Hill. They offer a ton of different flavored ginger beers like blood orange, caramelized pineapple, and pink guava in bottles and for growler fills, plus cocktails on tap. 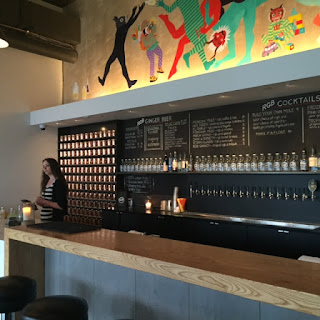 Their cocktails are already very reasonably priced at $8, especially considering they come in pint glasses, but during happy hour, Moscow Mules and Montana Mules (whiskey and ginger beer) are only $6 a piece. That is a seriously good deal. 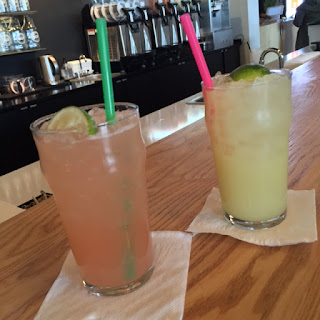 That's a Porch Swing (gin, aperol, and ginger beer) above, which was okay, but really, just stick with those Moscow Mules and you'll be happy you did.

Here's to hoping that RGB will keep that same happy hour offering at their new location on Hawthorne!
Posted by Katie @ Happy Hour Honeys at 12:22 PM

When my parents come through town, we often hit up Elephants Deli off of West Burnside and grab a few salads from the deli case. It's close, tasty, and has lots of options. In the same spirit, we recently decided to meet them at Providore Fine Foods on their way through town.

Oh yeah, and oysters. I don't know when I went from hating oysters to really liking them (maybe four years ago), but there's no turning back.

I would say that nothing was bad, but nothing stood out, and the oysters weren't a good enough deal to inspire us to drive across town. Basically if we lived closer maybe we would pop in, but I wouldn't go out of my way.
Posted by Unknown at 3:55 PM

What: The Garrison by Royale Brewing
Where: 8773 N. Lombard St.
Honeys Heart: Everything but the beer (and that's ok!)

I already touched on this in my posts about Mama San and Swift & Union, but it's been really exciting to watch as up-and-coming restaurateurs are more and more viewing St. Johns and Kenton as viable neighborhoods to start their businesses.

Two of the restaurant/bar spaces opened last month: The Sudra (Kel & and reviewed their The Ocean location here) and The Garrison taproom. (24th and Meatballs is rumored to be filling the third slot, but there's been no official word yet.)

With the weather being so nice, Doug and I recently walked to downtown St. Johns for dinner at Girasole (great wood-fired pizza, btw) followed by a round at The Garrison. 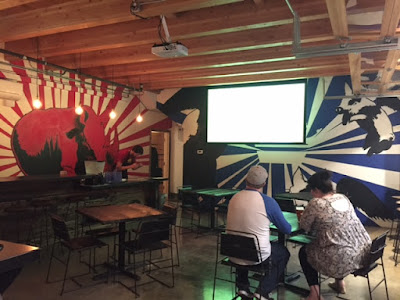 I didn't know anything about Royale Brewing before news of their taproom broke, but Doug explained that they've been around for a few years (their website says 2014) and their beers have been available at a selection of local restaurants, including a favorite of ours- La Taq. 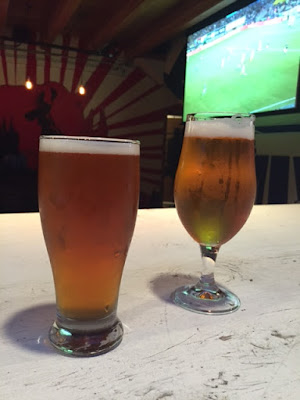 Doug didn't remember being especially impressed with Royale's beers when he had tried them previously, and I have to say, I felt fairly "meh" about the pale ale, belgian blonde, and stout that we sampled during our visit. They all had that sort of homebrew-y vibe to them where the beer's not bad, something's just a little off.

#1 The Location
Before Royale came to town, there were really only two other beer-focused spots that we frequented in our neighborhood: Chill N Fill and Occidental Brewing, neither of which we have ever walked to. The Garrison is an under 15-minute walk from our house, so I can see us taking advantage of that a lot, especially in the summer.

#2 The Ambiance
St. Johns has a lot of great dive bars, but there are only a few spots to go when you're looking to drink somewhere a bit classier. The patio at The Fixin' To is our go-to when it's nice out, but The Garrison is giving it a run for its money with its dual open-air options of picnic tables or outdoor bar seating (which I neglected to take any pictures of- sorry!).

#3 The Food
If it turns out that 24th and Meatballs is in fact moving next door, it will be a dream come true for Doug, who gets to eat their meatball sandwiches much less than he would like.

#4 The Service
Our server was super friendly and easy to talk to. Service is not always at top priority at breweries and taprooms, so I appreciate that The Garrison is bucking that trend.

And so, even if the beer is not so great, I'll think we'll be patronizing The Garrison quite a bit. Cheers!
Posted by Katie @ Happy Hour Honeys at 1:53 PM 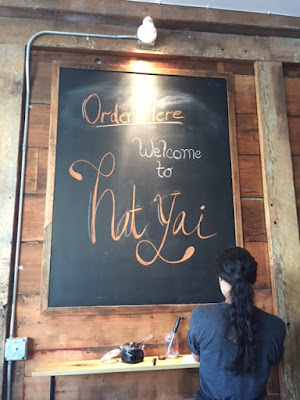 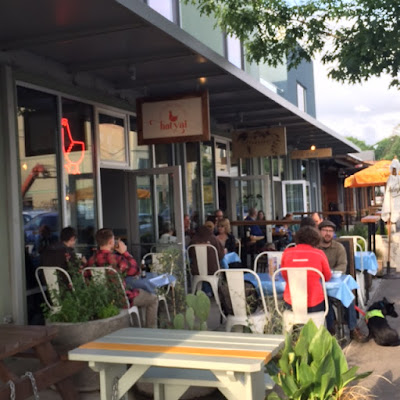 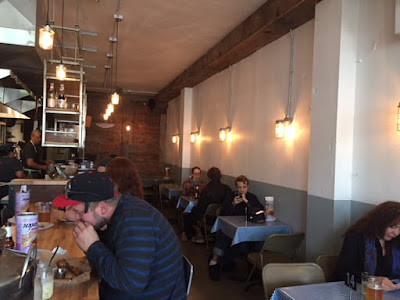 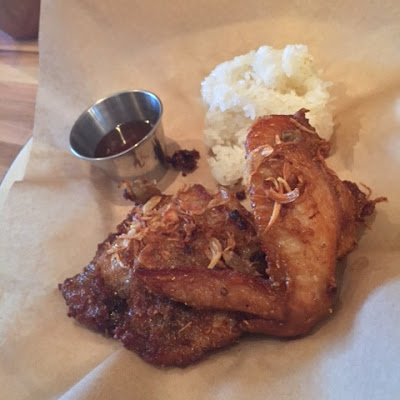 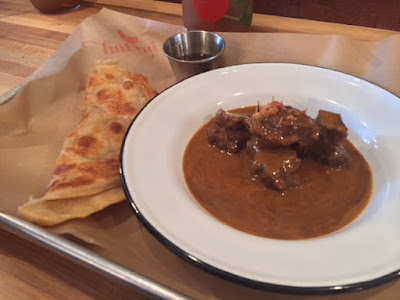 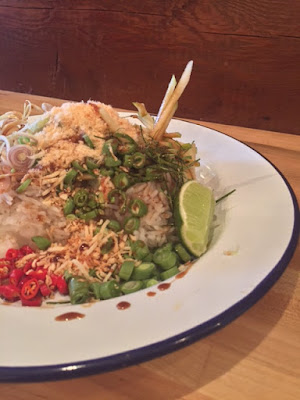 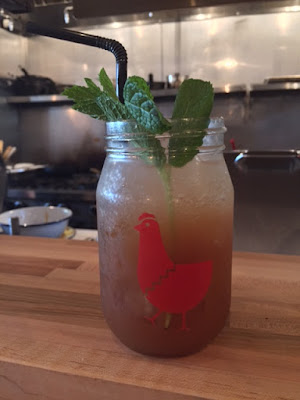 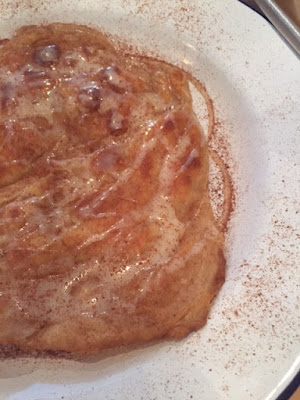 It's been a while since Katie and I reviewed a true happy hour, but we recently met up halfway (ish) between our two work establishments for some end-of-week unwinding (aka wine drinking).

Rae's has been around for quite some time (like 50 plus years) and for people who have lived most of our post-college lives in NW, it's maybe a little surprising we didn't make it there before now.

The restaurant has a neighborhood dive feel inside, so we opted to sit outside on the patio where we soon learned that it's assumed you'll share your picnic table if you're a party of two. That's okay by us, but it would have been appreciated if the server could have given us a heads up before he plopped two menus down next to us.

Also, within a few minutes of us being seated, the bros behind us began to surround us in plumes of smoke from their e-cigarettes. I mean, I guess it didn't smell as bad or linger in my hair as long as a regular cigarette, but it for sure affected our patio experience.

To help take the edge off our so-far iffy visit, we decided to order a half-carafe of the house wine ($9)... followed by a second carafe. The second carafe was obviously a different wine than the first, but whatevs. Cheap wine is cheap wine, right?

For snacks, we ordered the Cheddar Mack ($4.50) and Black and Tan Hummus ($6.50). Both would definitely fall into the greasy bar food category and while I wouldn't go to Rae's for the culinary experience, at least the prices were cheap?

Maybe we're just getting old, but I think both of us would willingly pay a bit more for higher quality food and a better ambiance. Those $9 carafes might convince us to come back though...
Posted by Unknown at 12:20 PM