The girls and I have mostly been hitting up happy hours on our (almost) bi-weekly girls nights so we decided to switch things up by getting actual dinner instead.

I have been wanting to try Mi Mero Mole FOREVER so I was happy when the girls agreed with my suggestion.

At Mi Mero Mole, the focus is on guisados, which are essentially stews and stir-fries. You can order them as the filling in tacos, quesadillas, burritos, or as part of a plate. 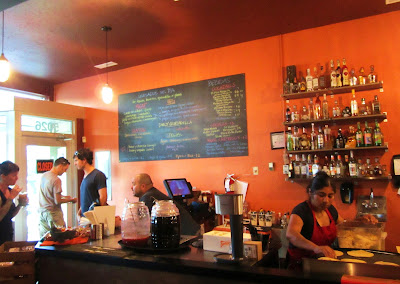 The menu is pretty extensive with over 50 different guisados, but only around 10 are available each day, which is helpful for those of us who are not the best with dinner decisions (aka, me and Kel).

We stared off with Chips & Salsa ($2) and margaritas. 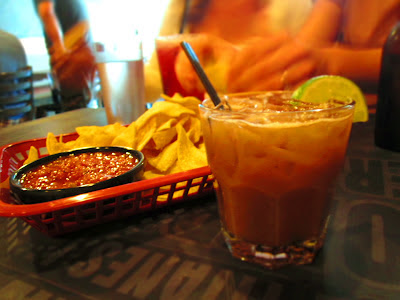 I ordered the Jamaica Margarita ($6/$9), made with housemade hibiscus syrup, even though I was warned that it was sweet. Should have listened because, yeah that thing was way too syrup-y for me.  Next time I'll try their classic marg instead... 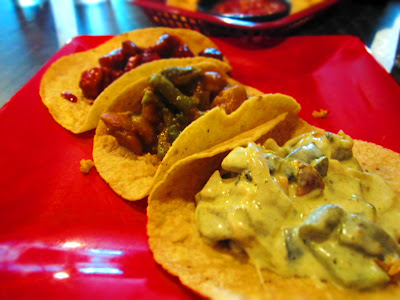 Rajas con Crema was my favorite (so creamy and delicious!) but the other two guisados were tasty as well. I also loved the tortillas. They were nice and thick, similar to the ones I had when I visited Doug in Guatemala.

Kel and Jen ordered tacos too while Gina and Dana went with quesadillas. 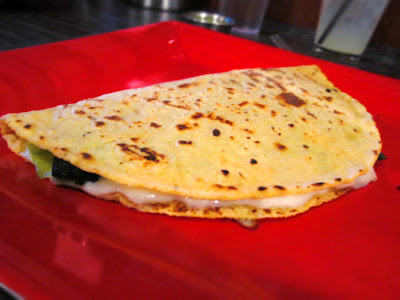 Confession: I was feeling pretty under the weather at our dinner so I didn't do my due diligence as far as sampling dishes other than my own or bugging people about what they thought of their food.

But that just means I have an excuse to go back with Doug and get his opinion! I'll keep you posted...

P.S. Fun fact: Mi Mero Mole is owned by Nick Zukin, "Zuke" of Kenny & Zuke's and the brains behind Extra MSG and PortlandFood.org. The more I learn about the Portland food and restaurant scene, the more I see what a small and interconnected community it actually is. Don't believe me? Check out this fun infographic from MIX Magazine's April issue. I know, right?

P.P.S. Mi Mero Mole just announced that they're starting a food and drink happy hour Tuesday-Friday from 4-5:30pm. Would prefer it go to 6pm so I could actually take part in it... but oh well.
Posted by Katie @ Happy Hour Honeys at 1:32 PM


A couple of weeks ago, Doug mentioned that he had never tried escargot, but really wanted to. So when we realized we had a weekend night free (a rarity these days with wedding season in full swing), I decided that needed to change.

Doug is pretty much the best at planning surprise dates (see: this and this and this) so I always feel a little inferior when it's my turn to figure where to go and what to do. This time, however, I was pretty sure I had it in the bag.

We started things off with a drink at Barwares, the just-added full bar connected to Johanna Ware's Smallwares. 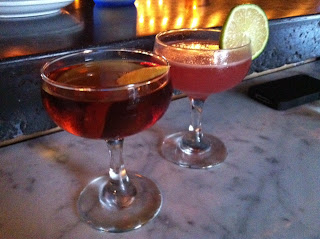 The drinks were good but I would skip the food the next time around. We were hungry so we tried the chicken lollipops and mu shu pork pancakes. Nothing special for being a bit pricey.

After that, it was off to our dinner destination. Doug guessed we were going Cafe Castagna (we've been wanting to try their burgers) but nope! Instead we headed for Cocotte.

Cocotte is a little French bistro that first caught my eye when Doug took me to dinner at Beast. I've been wanting to try it ever since, so when I spotted escargot on their menu, I thought it would be the perfect choice.

Cocotte greets all diners with a warm baguette served with apricot and mustard butter. Sounds a little strange but it was very tasty. 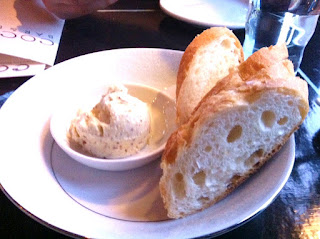 Of course, we had to get the Escargot sur Champ Vert  ($8) made with garlic butter, herb pistou (think: French pesto) & leeks on brioche. 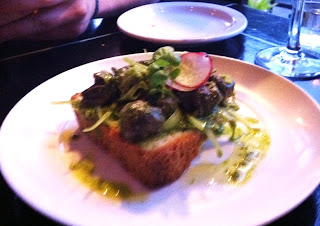 The only experience I had with escargot before was of cruise-ship variety so I was pleasantly surprised with the texture of these escargot. They were soft and not at all chewy, similar to well-cooked scallops (which I guess makes sense. Yay mollusks!). The herb pistou and leeks lent a freshness to the dish that was perfect for an almost-summer night. Doug wasn't a huge fan of the brioche but I never say no to bread so I was happy.

We decided to round out our meal with another French delicacy: Chicken Liver Mousse ($8) served with house pickles, mustard, port cherries and a baguette. 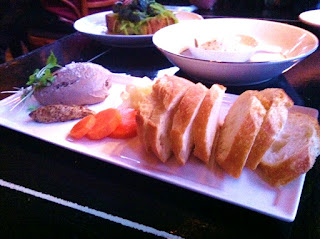 Though we both liked the escargot, Doug and I agreed that the mousse was our favorite dish. With so many accoutrements, there were many flavor combinations to be tried and each was delicious in its own way. We'd definitely order this dish again.

As we were paying our bill, our waitress mentioned that Cocotte has a happy hour. They offer $3, $5, and $8 food specials Tues-Sat 4-6pm & 9pm-close and all day Sunday. Need to hit that up ASAP!

Oh! And I almost forgot. Cocotte ends each meal with the gift of sugared Madeleine cookies (my second favorite French cookie). Such a lovely ending to a great dinner! 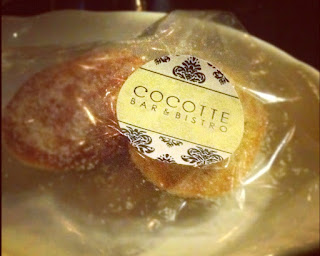