How to Throw the Best Bachelorette Party Ever Part 2: What to Do in Austin

Read Part 1 of How to Throw the Best Bachelorette Party Ever here.

I know it's not for every group, but I wanted to have a bachelorette weekend away with my friends for a few different reasons. First, my friends are spread out all over the country with girls living in Boston, Chicago, LA, Columbus, the Bay Area, and Portland. Most girls would be traveling anyway, so I figured why not make it a destination event? I also love to explore new cities and while I had been to Austin previously (read those posts here, here, and here), I knew that there was a lot more to see. Lastly, I know my friends like to travel too and thought that they'd probably appreciate being introduced to an awesome new city. Austin it was!

P.S. If you're not going to read this whole post- because it is pretty damn long, the most important thing for you to know is that you need to go to Rainey Street. Scroll down to the bottom for more info. 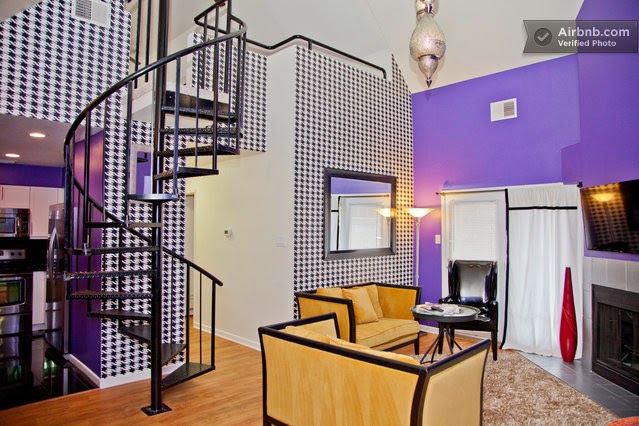 We explored the idea of sharing a few hotel rooms, but with around 10 girls committed to the weekend from the beginning, it seemed like a better idea to find a AirBnB spot that could house all of us. That way we could also cook our own breakfasts, lunches and dinners, and make drinks more easily, which would save us some money too. Kelly ended up finding this condo on E 4th Street. We all fit, it had a fun vibe, and it was within walking distance of most of the main attractions. Perfect!

Most of the girls arrived Friday afternoon, so we had plenty of time to settle in to our condo, grab snacks and drink supplies, and get ready before heading out for our first night in Austin.

As our friendly local liquor store owner told us, Congress St. serves as the dividing line between classy and trashy. If you're not feeling the drunk college crowd, stay west of Congress St. in the Warehouse District. If you want a more Vegas-style night, head east of Congress, specifically to E 6th St.

What: The Ginger Man
Where: 301 Lavaca St
Honeys Heart: Lots of beer & boys

I will admit that when we all waltzed into The Ginger Man (chosen by Lo because of the name, obvs), we were not expecting it to be a beer-only bar. But, as I told the bartender after he pointed out that "you probably won't like this place, there's no liquor here", I'm a Portland girl and I do like my beer, especially if it's local (bitch!). 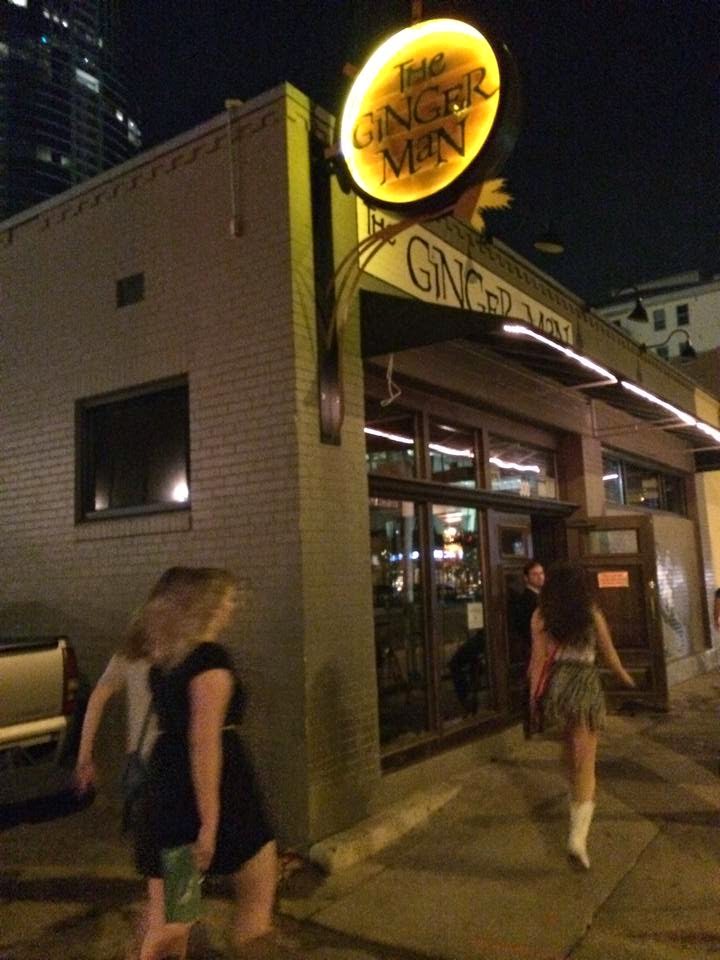 Actually, the Ginger Man turned out to be the perfect spot for a bachelorette party because I think there were maybe two other girls in the bar. Lots of boys translates to lots of free drinks and lots of excuses for coin-winning.

What: Jeremy Bar (aka The Market)
Where: 319 Colorado St
Honeys Heart: Jeremy & the rooftop deck

One of the best things about Austin is that a majority of the bars and restaurants have patios or rooftop decks. I'm not exactly sure why we picked The Market over some of the neighboring rooftop bars in the area, but it turned out to be a great decision, mostly because of Jeremy. 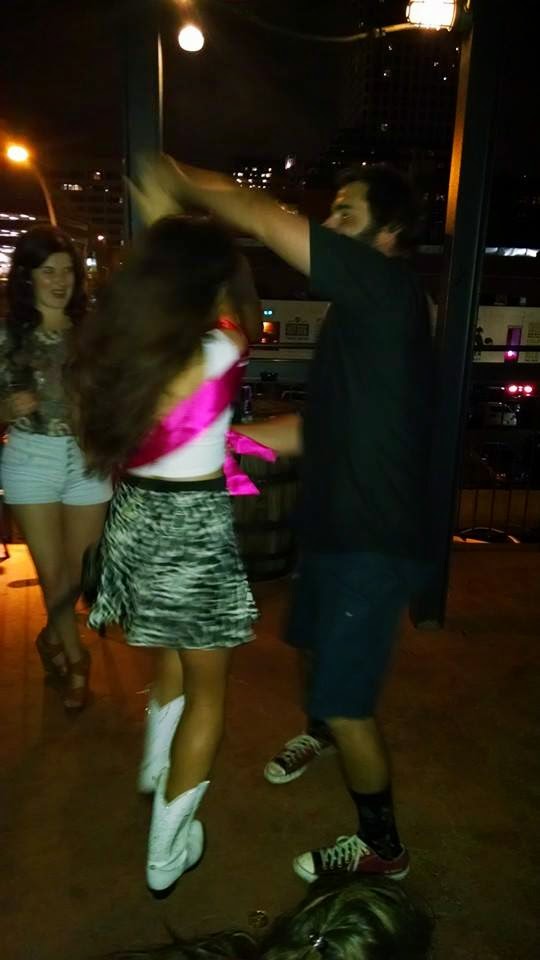 We figured that Jeremy must be the owner or something because who else would be allowed to give out so much champagne, throw Natalie on his back to pour us shots behind the bar, teach us to two-step, and take off his pants and dance in his undies for the bartenders across the street at the end of the night? 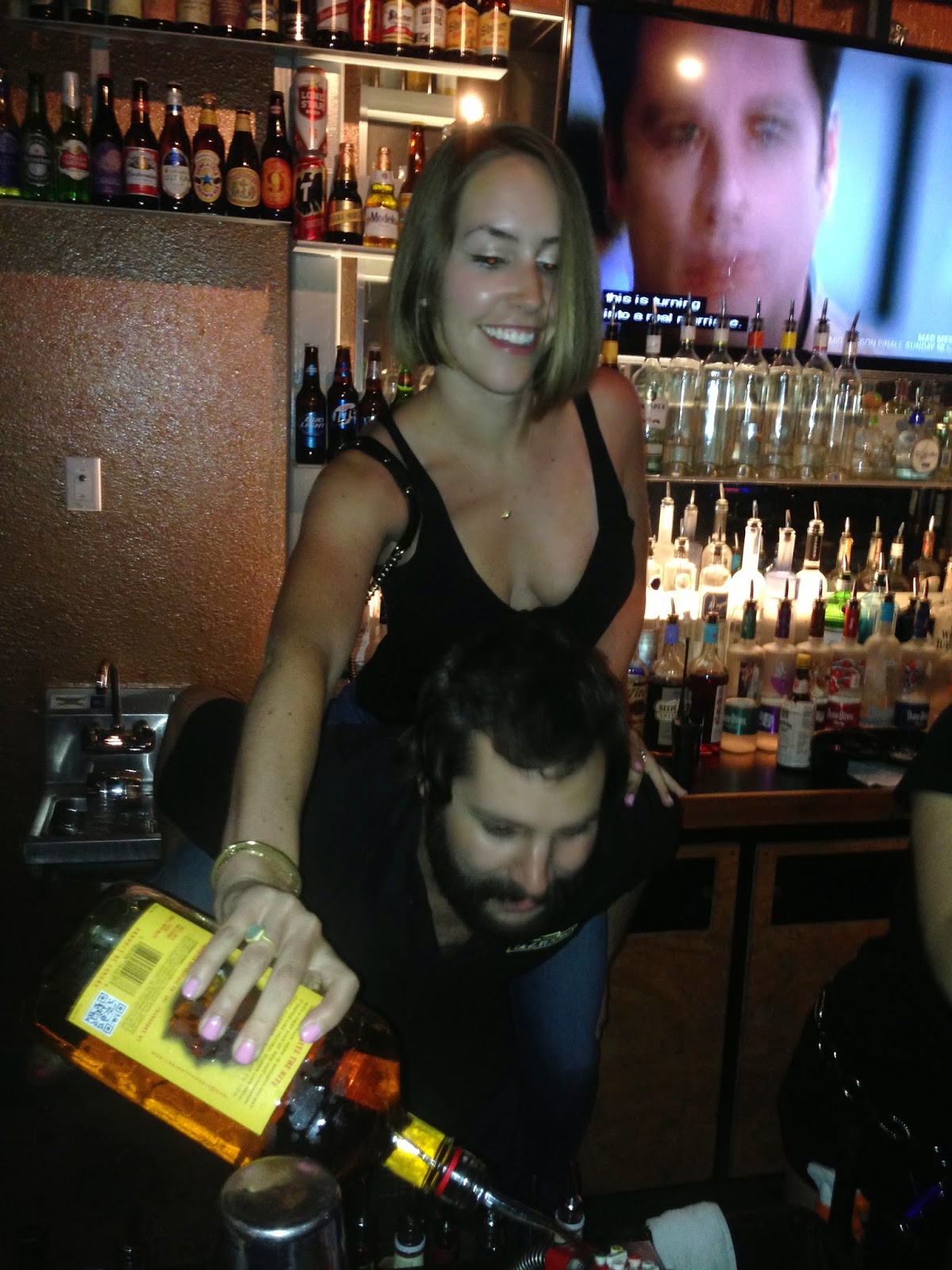 Jeremy Bar, as we came to call it, became a bit of a home base for us for the rest of the weekend and I'm happy we found it our first night in the city. Thanks for showing us such a great time, Jeremy!

On Saturday, we started the day by taking the bus to Zilker Park.

Barton Springs Pool is located in Zilker Park and is a three-acre public pool fed from underground springs. It only costs $3 to get in and the city is in the process of completing some renovations, so it will be even nicer by the time you visit, I'm sure. 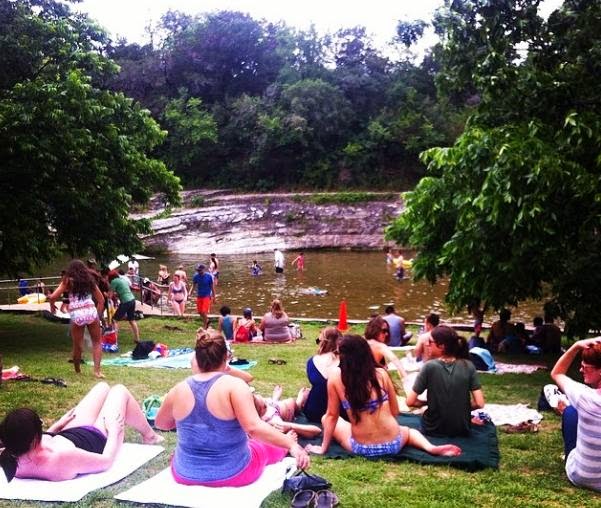 We had a great time laying out and wading in the pool, but eventually we needed food so we headed to the Market District for some Amy's Ice Creams, lunch from Valentina's Tex Mex BBQ food truck, and some beers from Brew Exchange. Brew Exchange is cool because the prices of the various beers are based on demand and occasionally the exchange will "crash" and all the beers will drop down to $1. It was nearly empty when we visited on Saturday afternoon, but it's supposed to get crazy busy on weekend nights.

Saturday was sequin night so after we finished getting all dolled up, we decided to start our night with fancy drinks at The Driskill Hotel (more on that in a later post).

From there, we hit the Dirty Sixth, which is closed to cars on weekend nights. There were people everywhere, promoters approaching us at every corner, basically chaos. 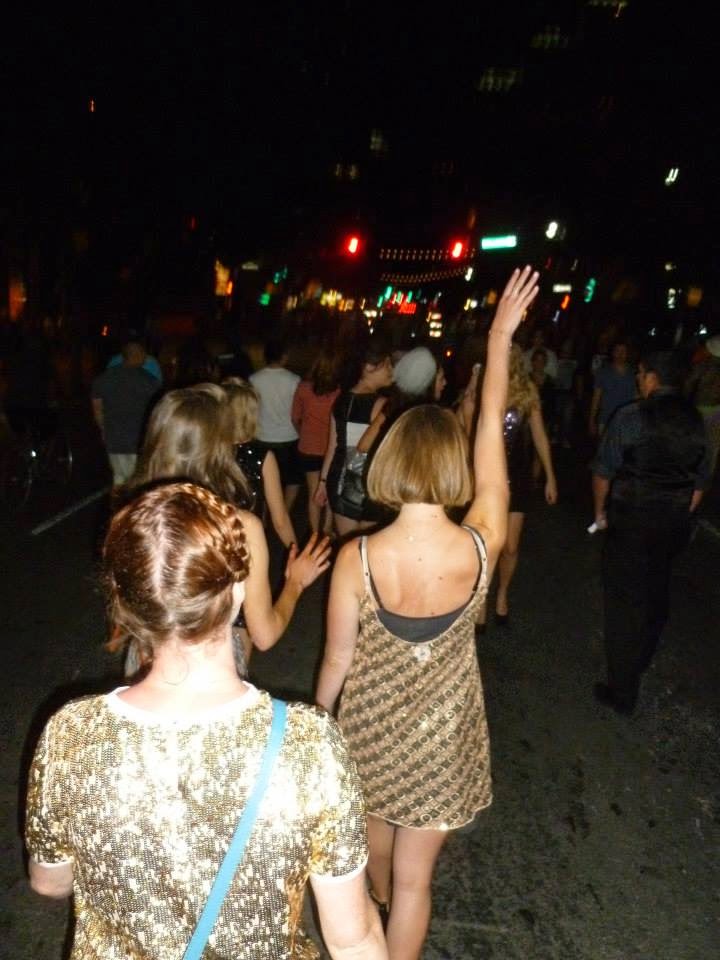 We quickly learned that when promoters came up to us promising free drinks, it was best to request shots over mixed drinks. You're getting so little alcohol in those drinks anyway that you might as well just get shots instead of having to finish a watered down drink!

What: Pedicabs
Where: to White Horse!
Honeys Heart: pedicab races

After we got our fill of the Dirty Sixth, we decided to head to The White Horse, a hipster-friendly honky tonk with live music every night.

There are tons of pedicabs along 6th and they seemed a lot more fun than cabs, so off we went. It was about a 10 minute ride from 6th to White Horse and the only way I can describe it is madcap. 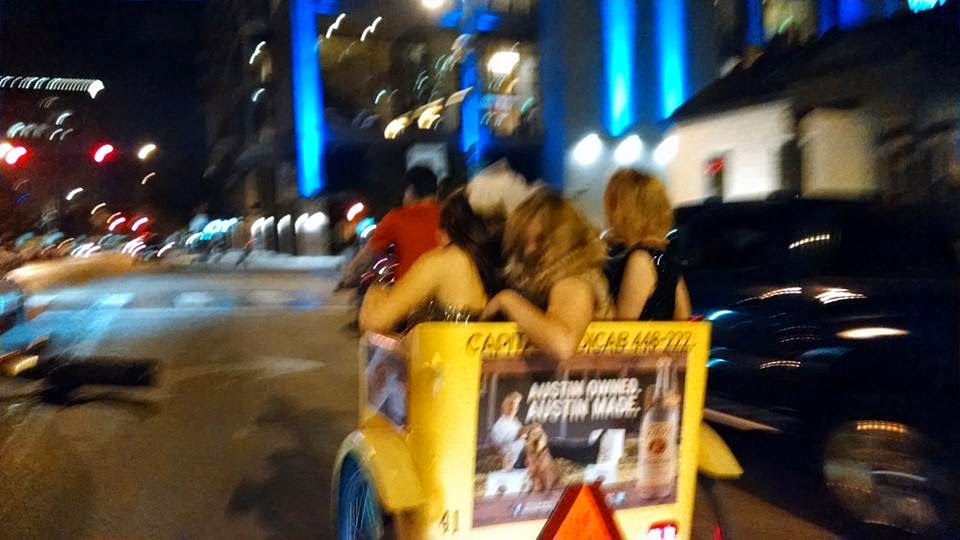 Our drivers whipped us around corners, cars where honking, girls were laughing and yelling. I might have been doing my best pageant wave. It was so much fun. I highly recommend it.

Admittedly, The White Horse is probably not the ideal venue for sequin night, so we only stayed for a short while before hitting up Jeremy Bar and then eventually ending our night with some delicious comfort food at 24 Diner.

We started Sunday morning off with a late brunch at Searsucker, which serves "New American Classic" cuisine and, more importantly, $4 bloody marys. 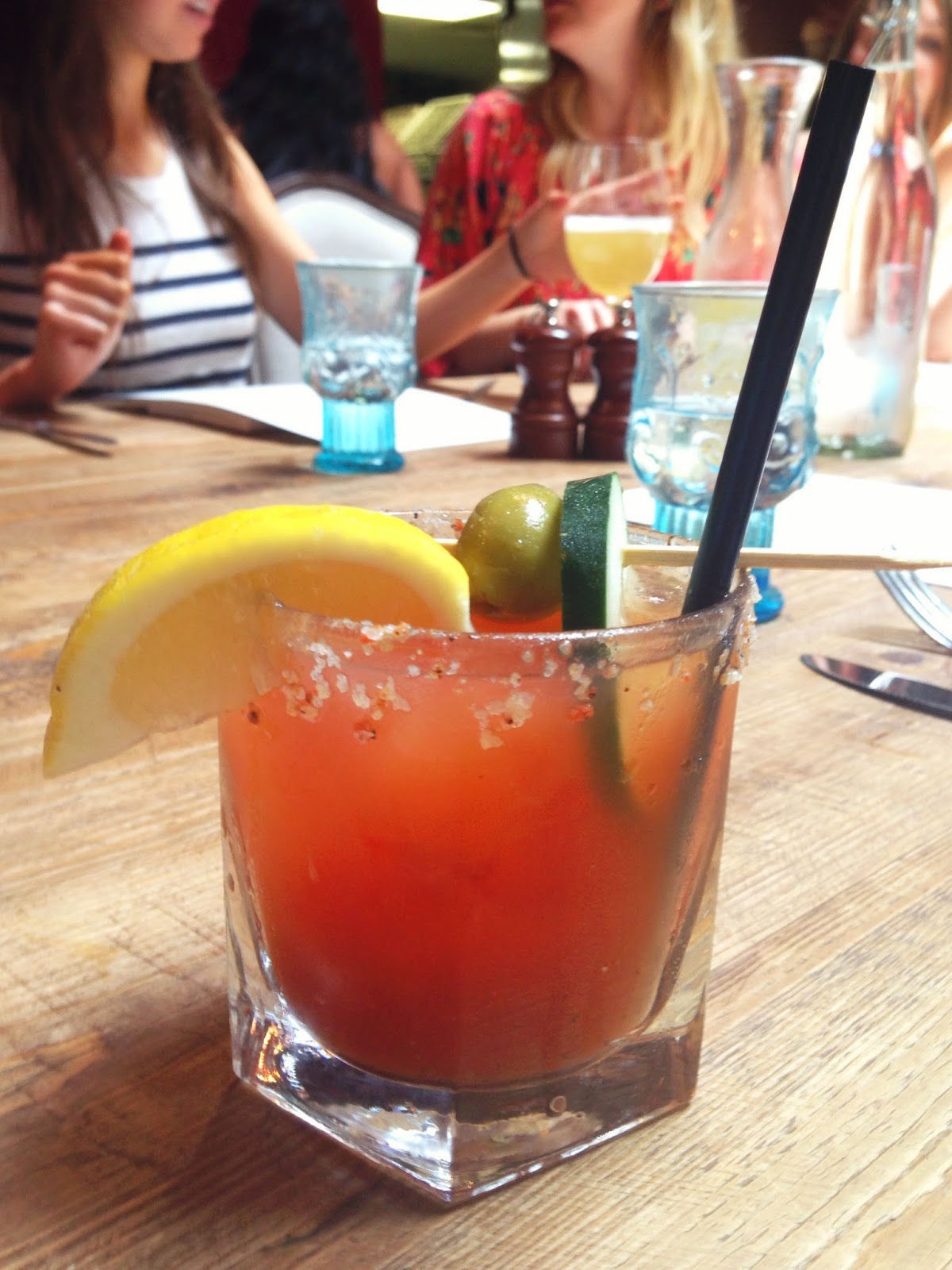 Then it was pool time for the rest of the day (we were definitely in recovery mode), dinner from Torchy's Tacos (thanks again, Lo and Nat for picking it up... that queso was worth it right?) and one last night of getting ready (you know you loved that Sarah).

And then it was off to Rainey Street, aka the cutest street in the world. Like, for reals.

Once a sleepy residential street, the historic district received a boost in 2004 when re-zoning laws changed, allowing the neighborhood's quaint Victorian houses and charming bungalows to be converted into restaurants and bars with large backyards and cute front porches. It is seriously the most adorable nightlife district I've ever seen. I might be a little obsessed...

What: The Container
Where: 90 Rainey Street
Honeys Heart: Cheap cocktail specials and a cool atmosphere

Someone told us that The Container is the place to be on Rainey St. (I think it was Shannon and Sarah's cute pedicab driver), so we decided that should be our first stop. 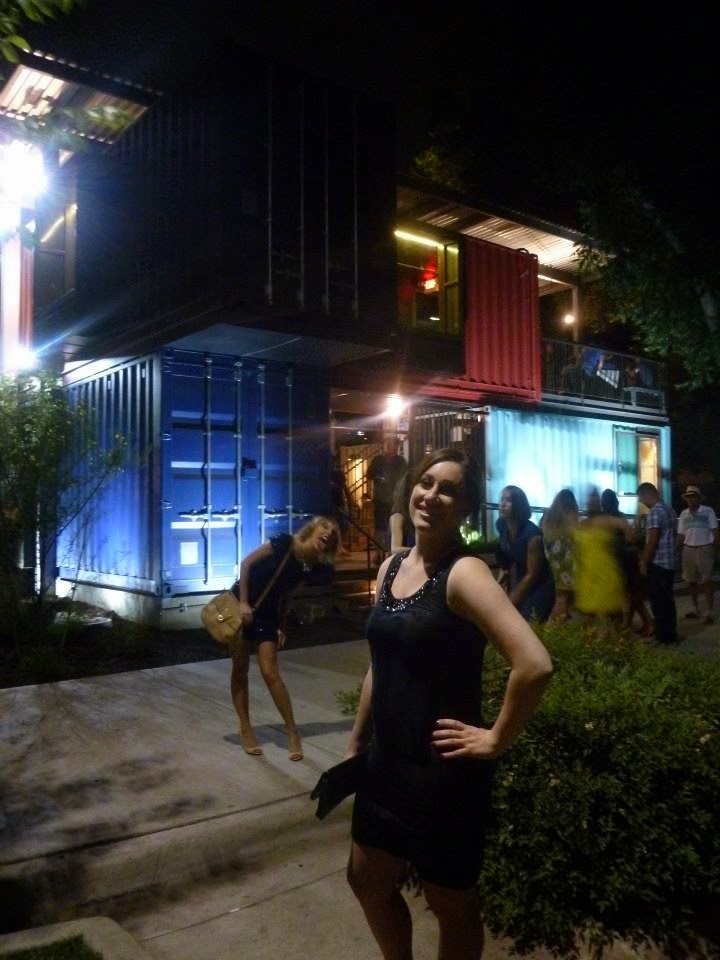 Unlike the other bars on the street, it is not in a renovated house but rather is made from old shipping containers that have been stacked around a large courtyard (Shanzie is doing some good modeling out front).

We grabbed some $4 Mint Juleps and proceeded to make friends with just about everybody. (Below, a rare pic with "no strangers" taken inside a container room.) 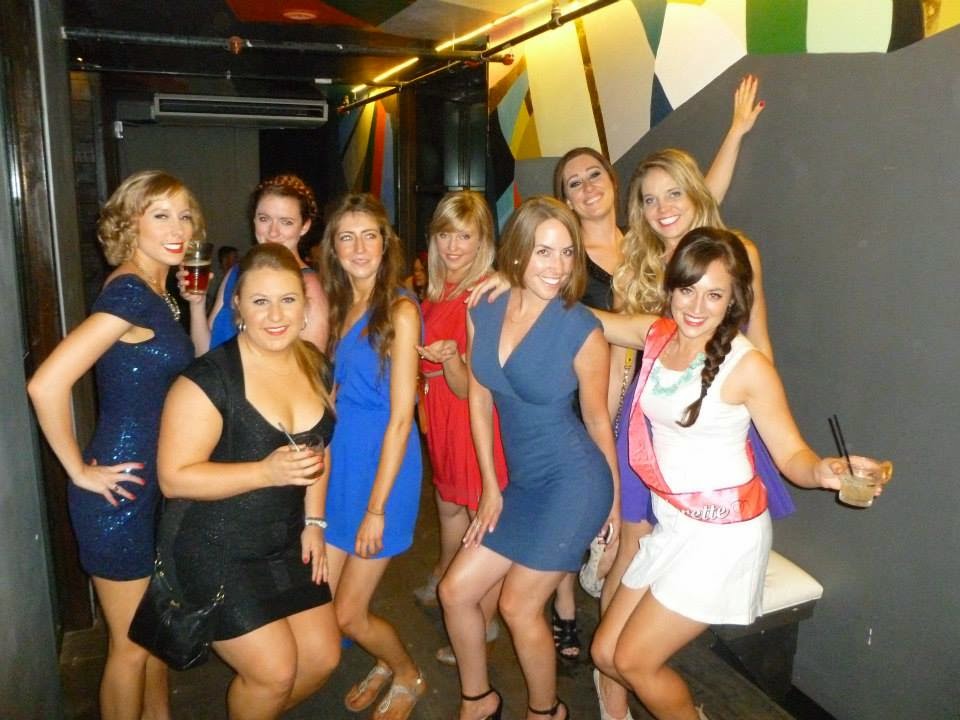 Lucille had a much more laid back vibe than The Container, but you probably wouldn't guess that from this excellent photo taken on its front porch: I believe the photo was captioned "Turn Down For What?" in our photo album, so I'll let you make your own assumptions. But anyway, super cute place with good drinks too- though they did take FOREVER to get.

Here is the truth: all I remember about Icenhauer's is that the DJ was unable to play "Tell Me When To Go" and that upset me greatly. I think it also had a more masculine vibe than Lucille but an equally charming back patio. Dogs were also allowed inside because our german shepherd friend Bella from Container Bar was there too. So basically, I know all the important things... Anyway, the takeaway is you can't go wrong with any bar on Rainey Street, Icenhauer's included.

So to wrap it up, my bachelorette weekend was amazing, and I'm so happy that I got to explore more of Austin with my best friends.

I can't wait to go back!