A few weekends ago, Doug and I headed up to Seattle for a sports-free weekend. This was a BIG DEAL because usually our weekend trips up north are dictated by the Sounders and Mariners schedules. This time, however, our weekend revolved around exploring neighborhoods that were not SODO. Yay!

Over the last couple of years, Doug and I have developed the tradition of stopping at Lela's Bistro on our way out of town. We are obsessed their pork meatball bahn mi and are crossing our fingers that the rumblings we've heard that they might be closing at the end of the summer are not true. 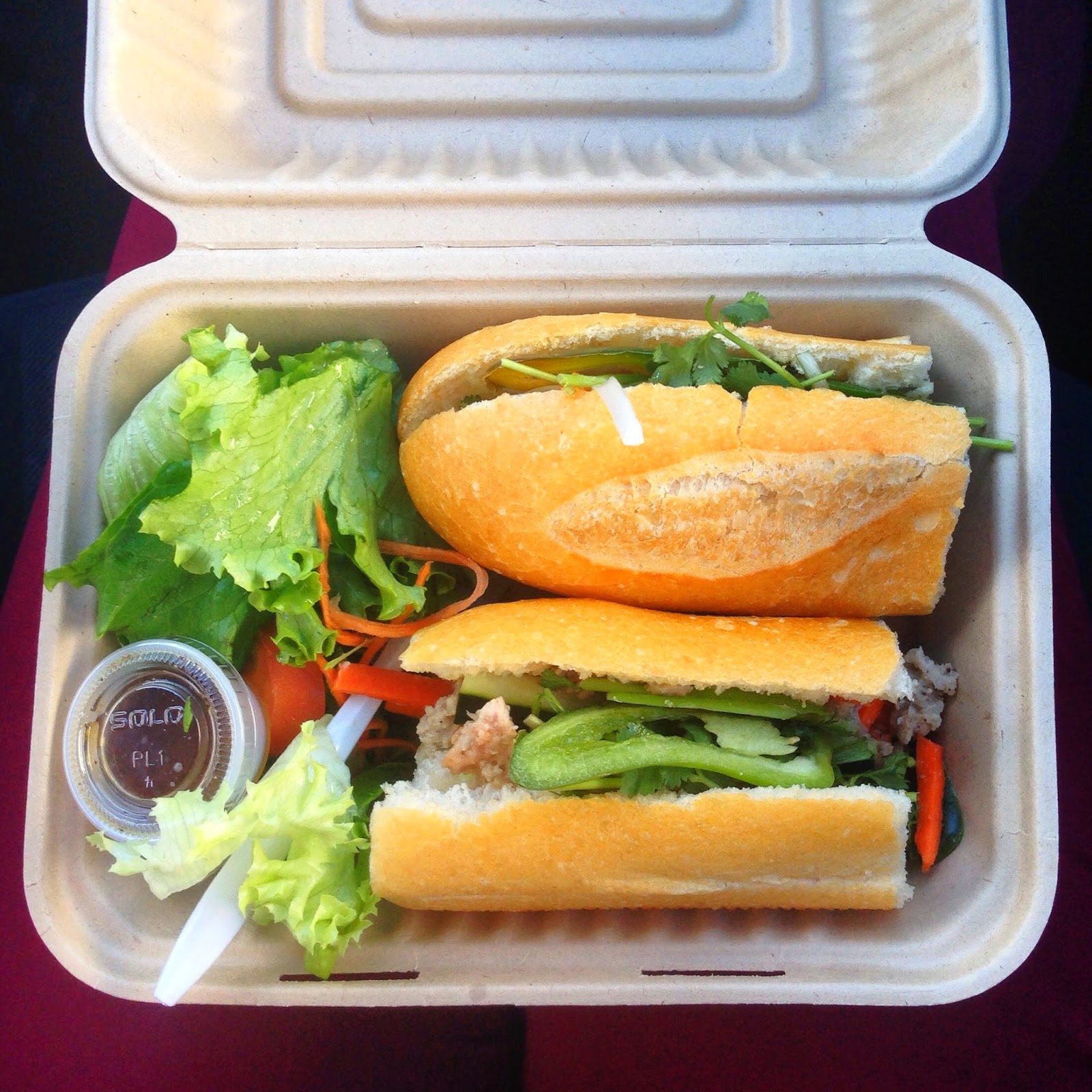 We got up to Port Orchard (Doug's hometown) late Friday and then got an early start Saturday morning with a ferry ride across the sound and then a run on Alki. 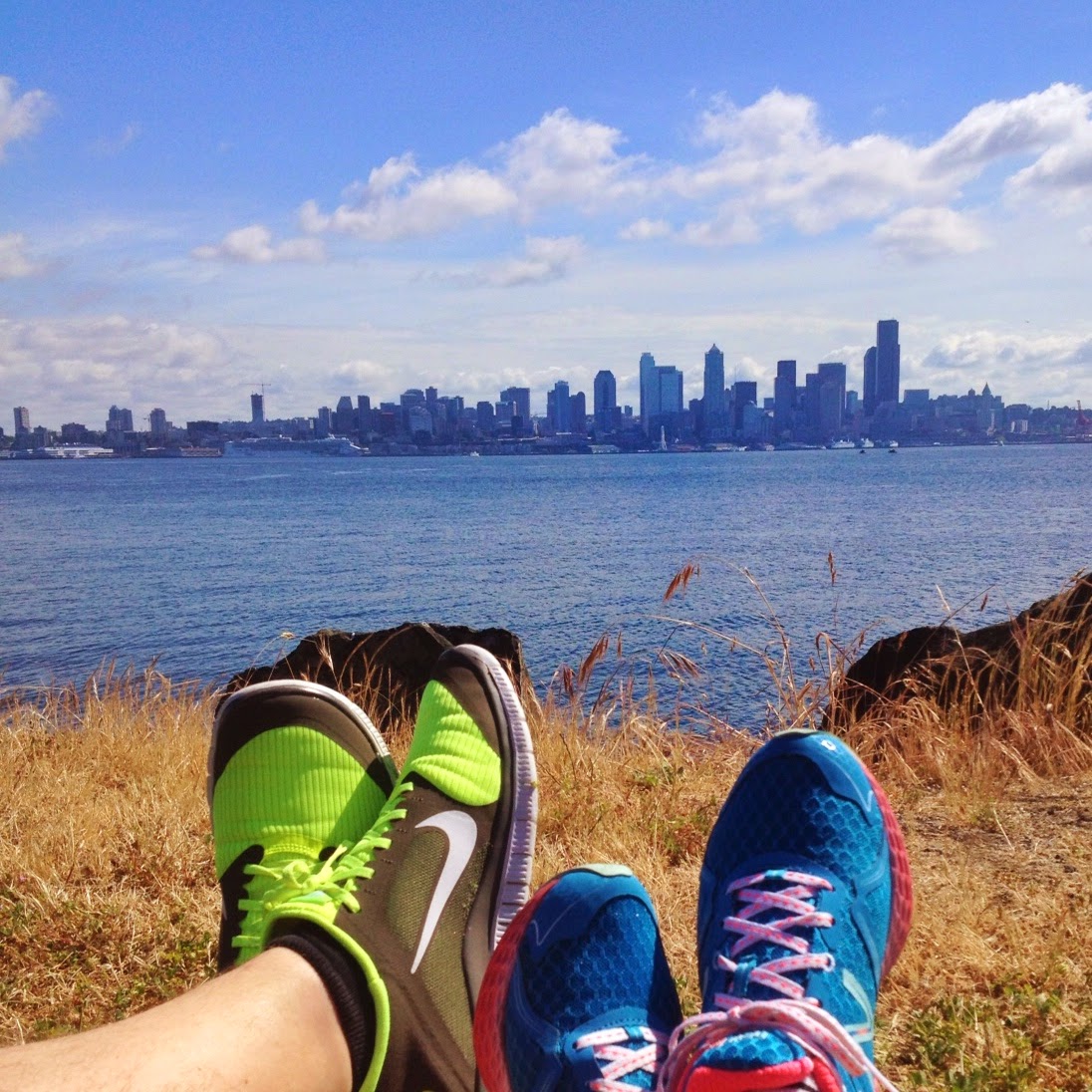 Then it was time for a quick beer before we ordered our lunch. We stopped by our old standby Fremont Brewing for some Summer Ales and about 15 minutes before we were done, Doug made the call to Paseo. 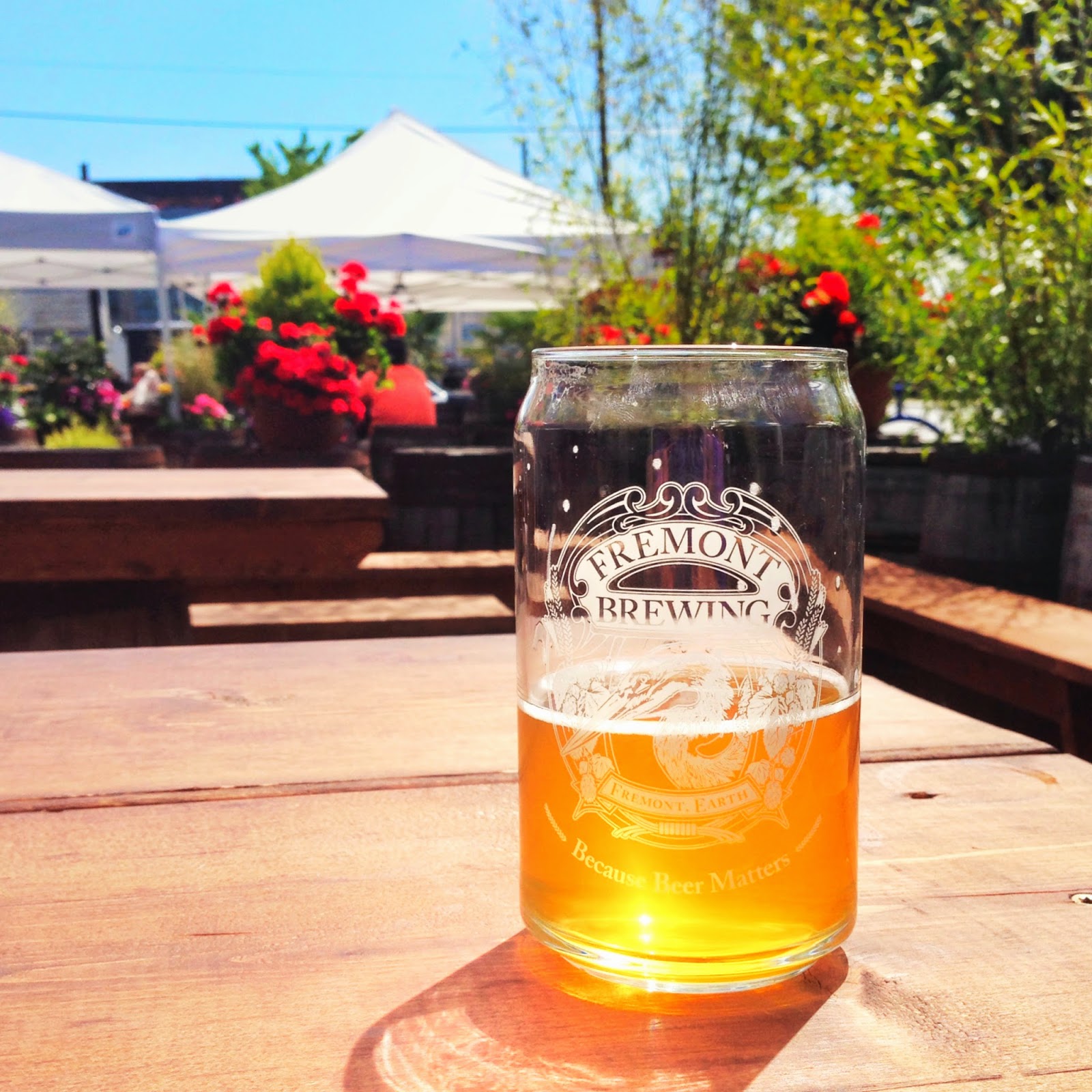 Why do you need to call Paseo? Because the line is insanely long and if you place your order over the phone, you get to skip it. 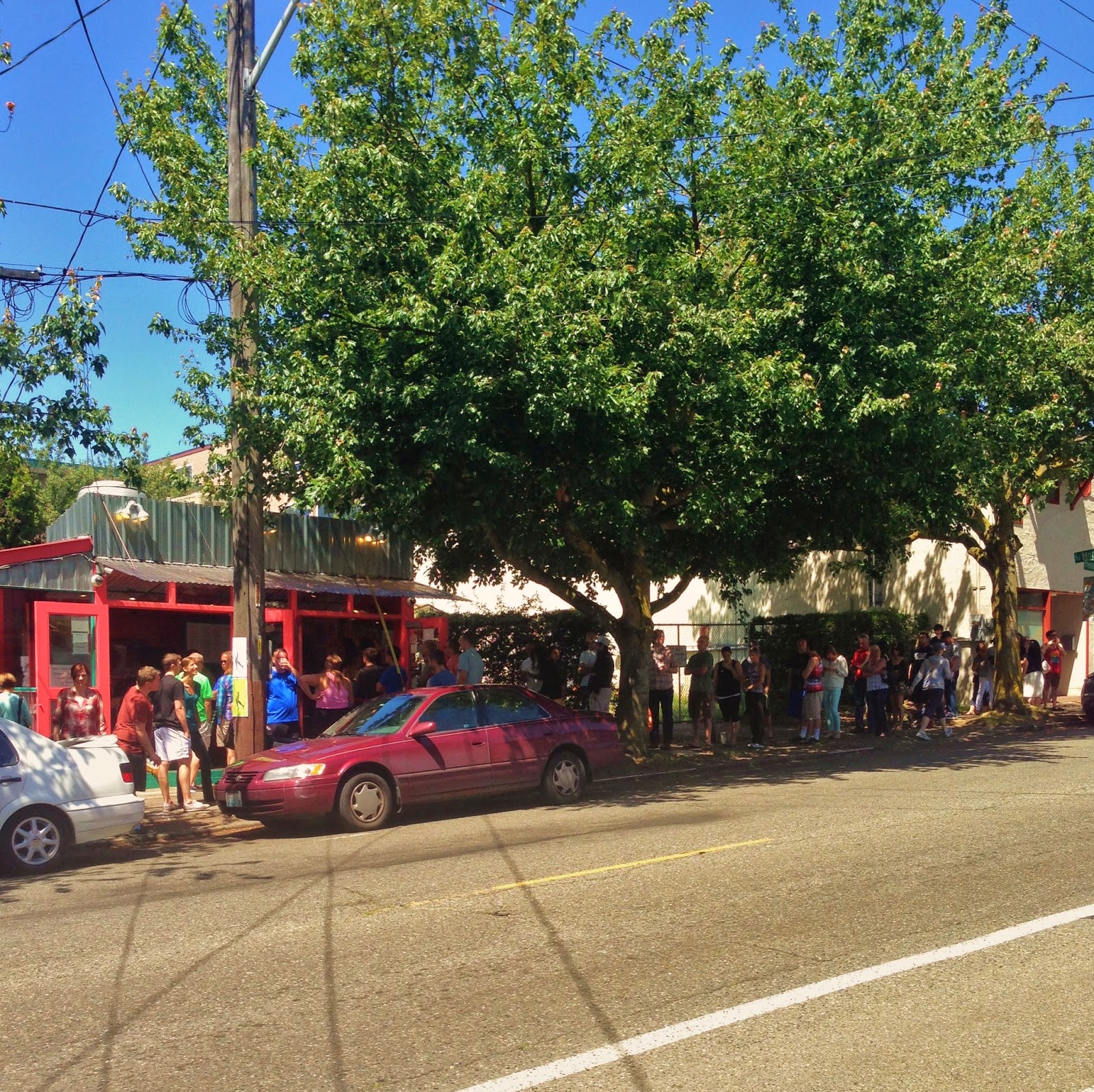 Paseo serves Caribbean food and is most well-known for its huge and delicious sandwiches. 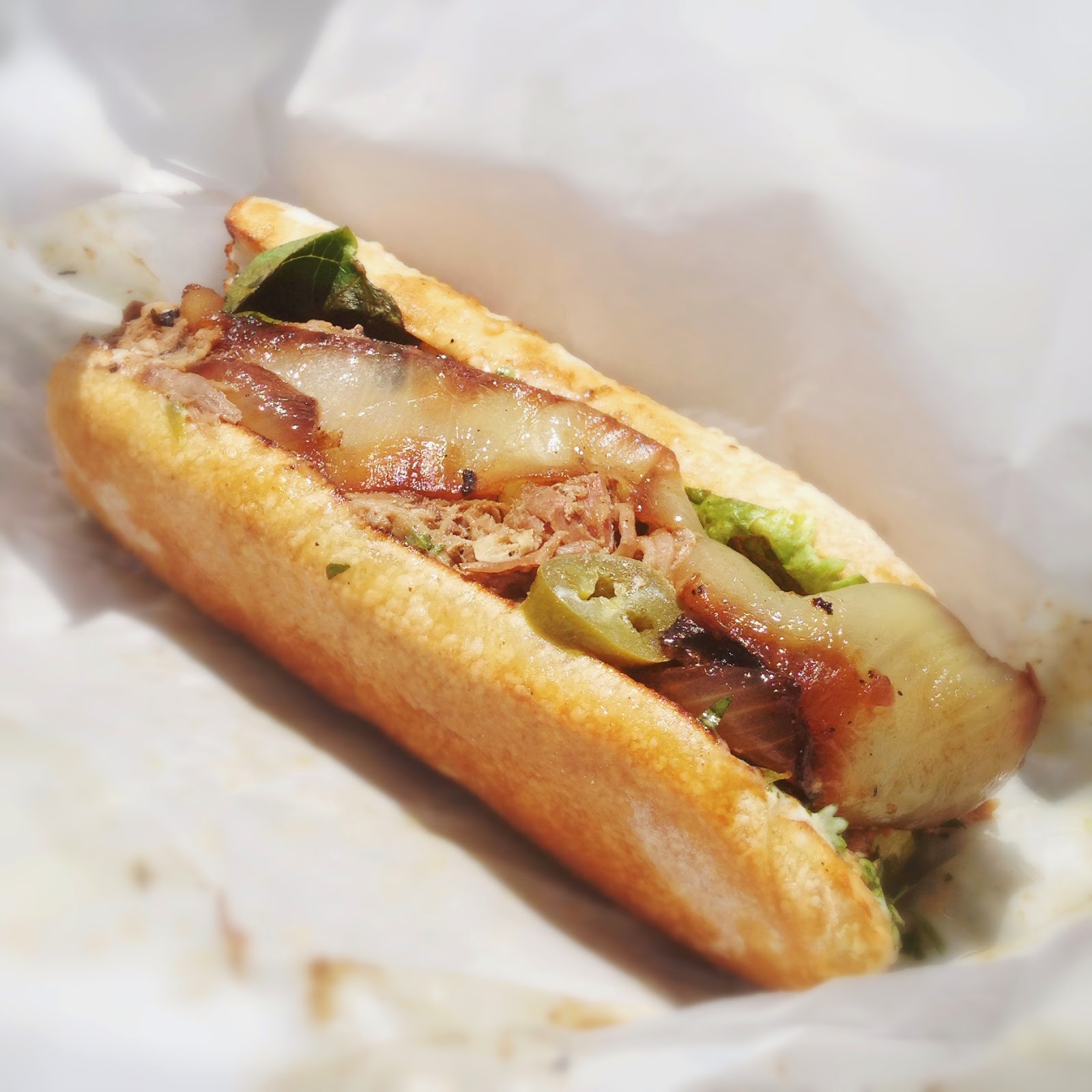 I went with the Paseo Press ($8.95) made with roasted pork, smoked ham, swiss cheese, caramelized oinions and banana peppers. 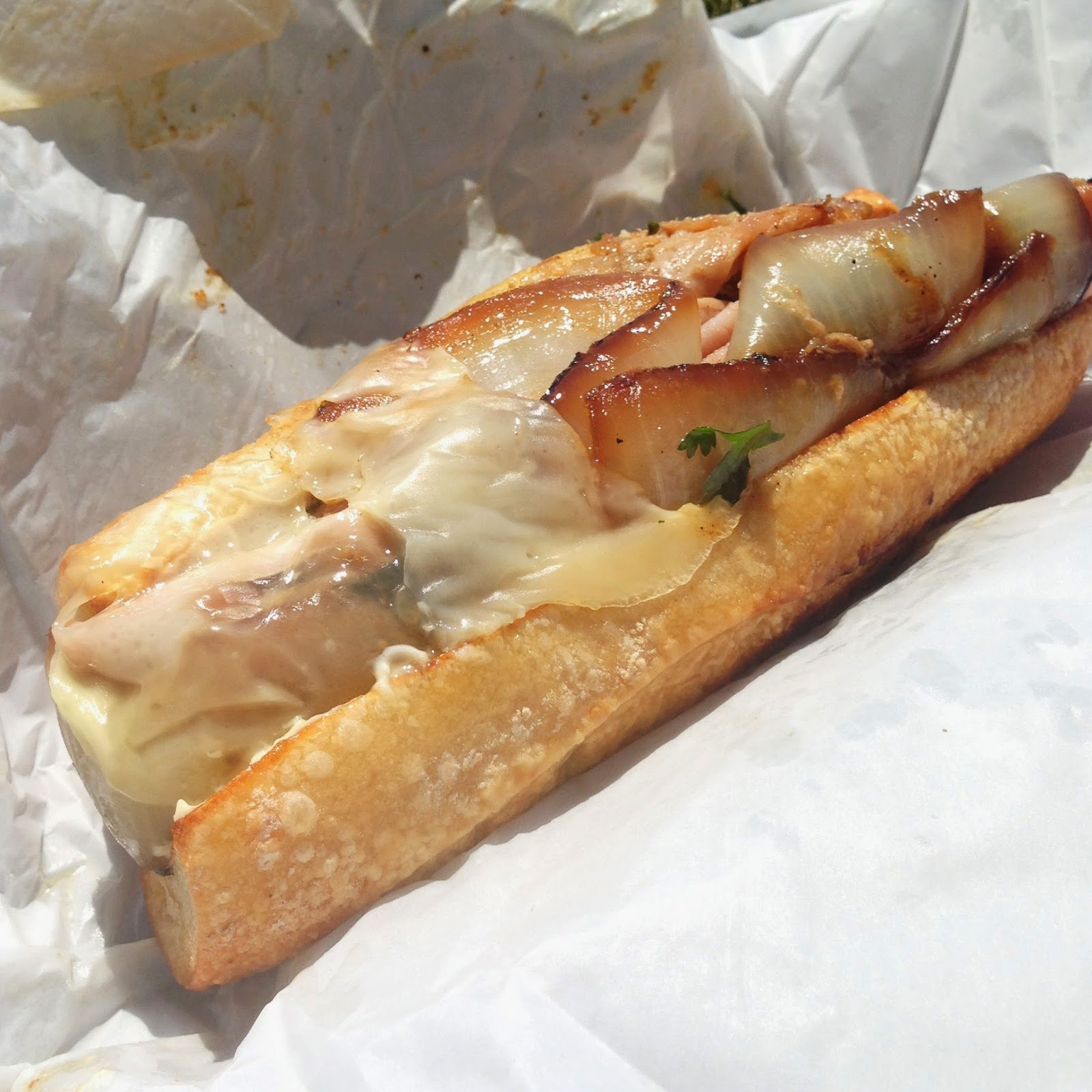 And if it's nice out, I highly recommend enjoying your sandwiches in Gas Works Park. Our picnic there almost made me want to move to Seattle... almost. 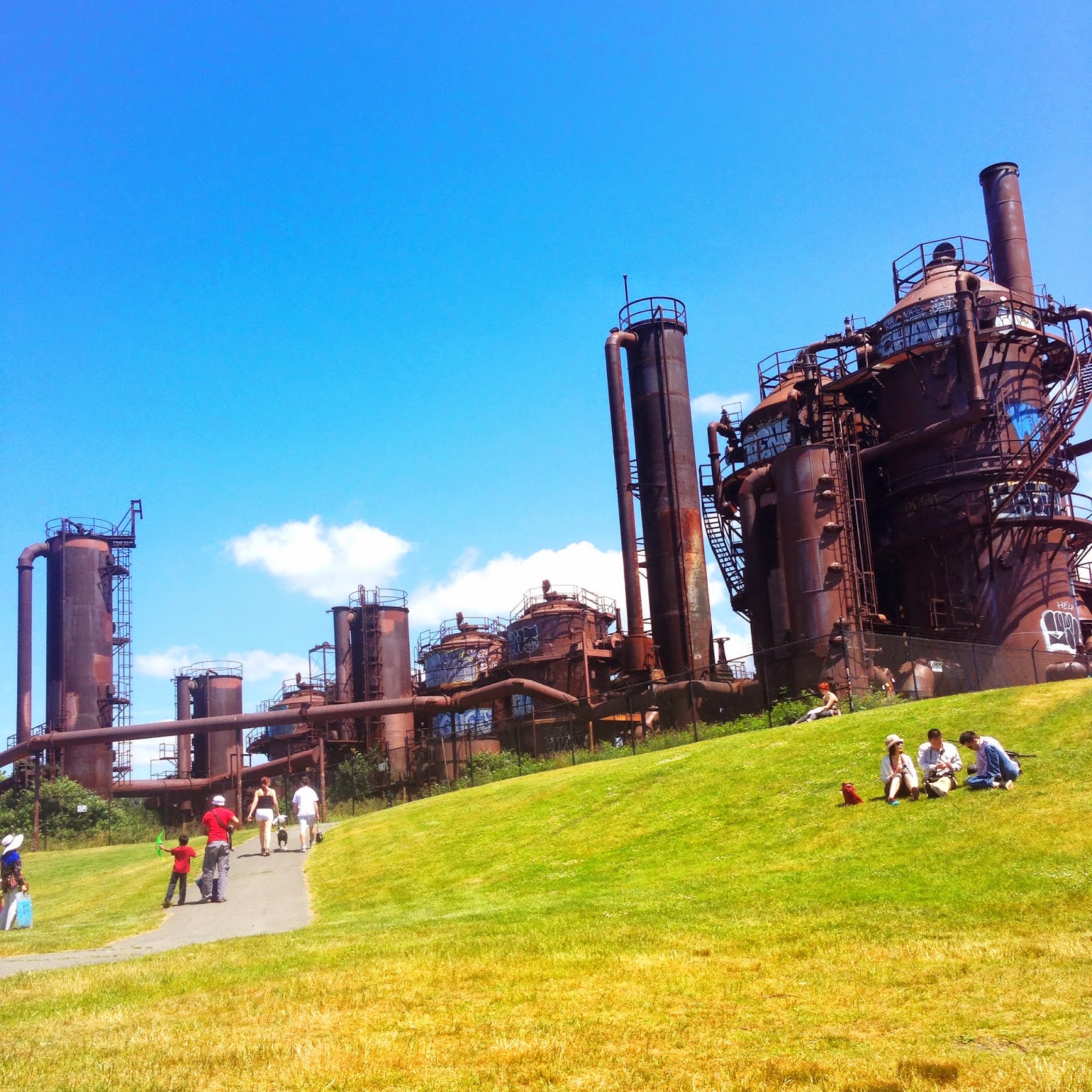 After devouring our humungous sandwiches, we needed to burn a few calories, so we headed over to Von Trapp's for some bocce ball. 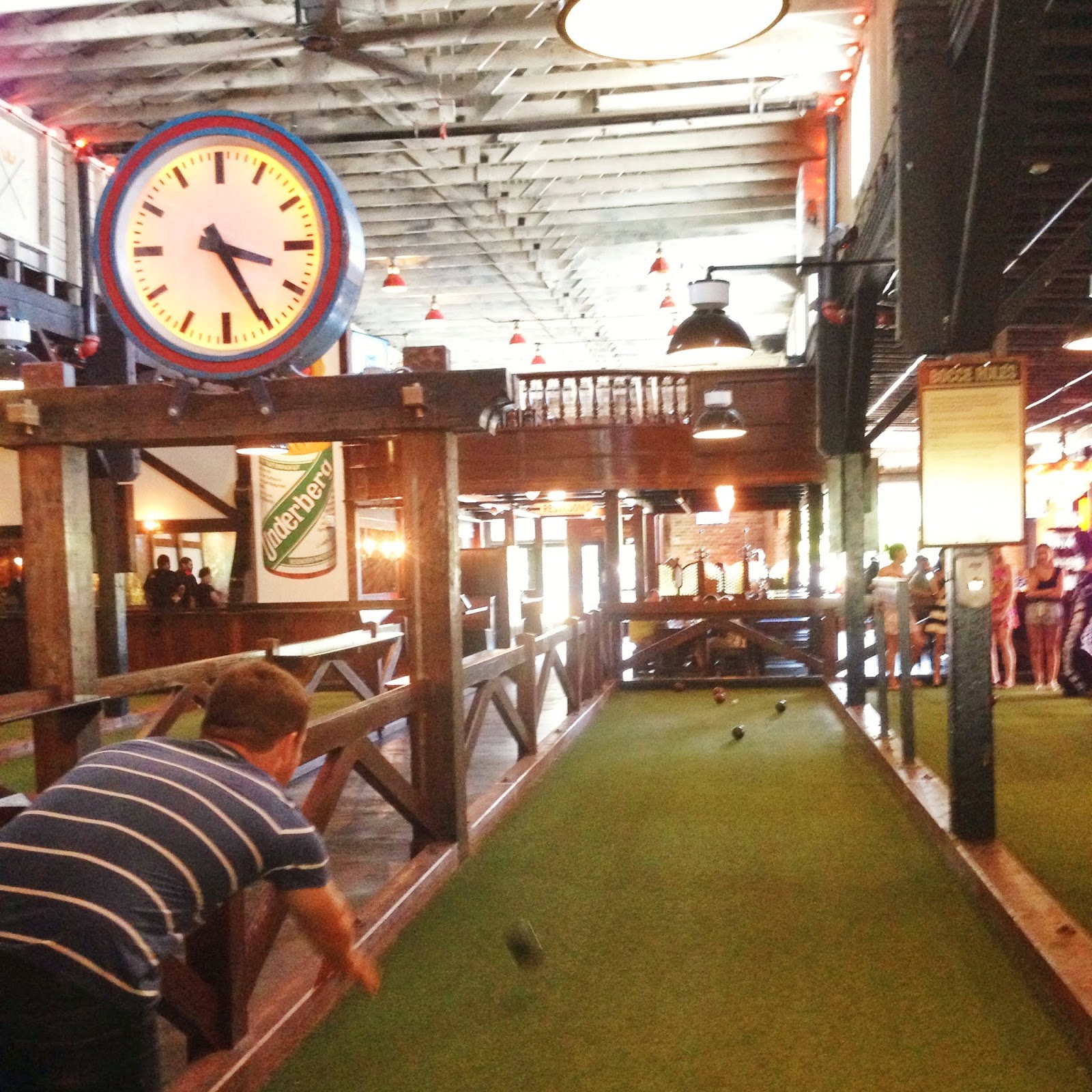 Von Trapp's is a German beer hall featuring four bocce ball courts, plenty of bar space, and a soon-to-open patio. The service was awesome and the courts were great. Plus I beat Doug.

We had no problem getting a court on a sunny Saturday afternoon, but you should probably make a reservation if you're going later in the evening. The line to get in there gets real long too.

We had a little time to kill before our dinner reservation in Capitol Hill, so we headed to Sun Liquor.

Sun Liquor Bar & Distillery specializes in distilling gin and vodka and also serves craft cocktails made with their house spirits. Doug and I have popped in before and were impressed with the cocktails and I liked the fun nautical meets carnival decor, so we decided a repeat visit was in order.

Sun Liquor is very rare in that it actually lists one of my all time favorite drinks on its menu: a Southside. Southsides are essentially mojitos made with gin instead of rum and you should probably try one ASAP. Sun Liquor makes theirs a little special by adding some ginger beer into the mix. Basically the perfect drink for a hot, sunny day. 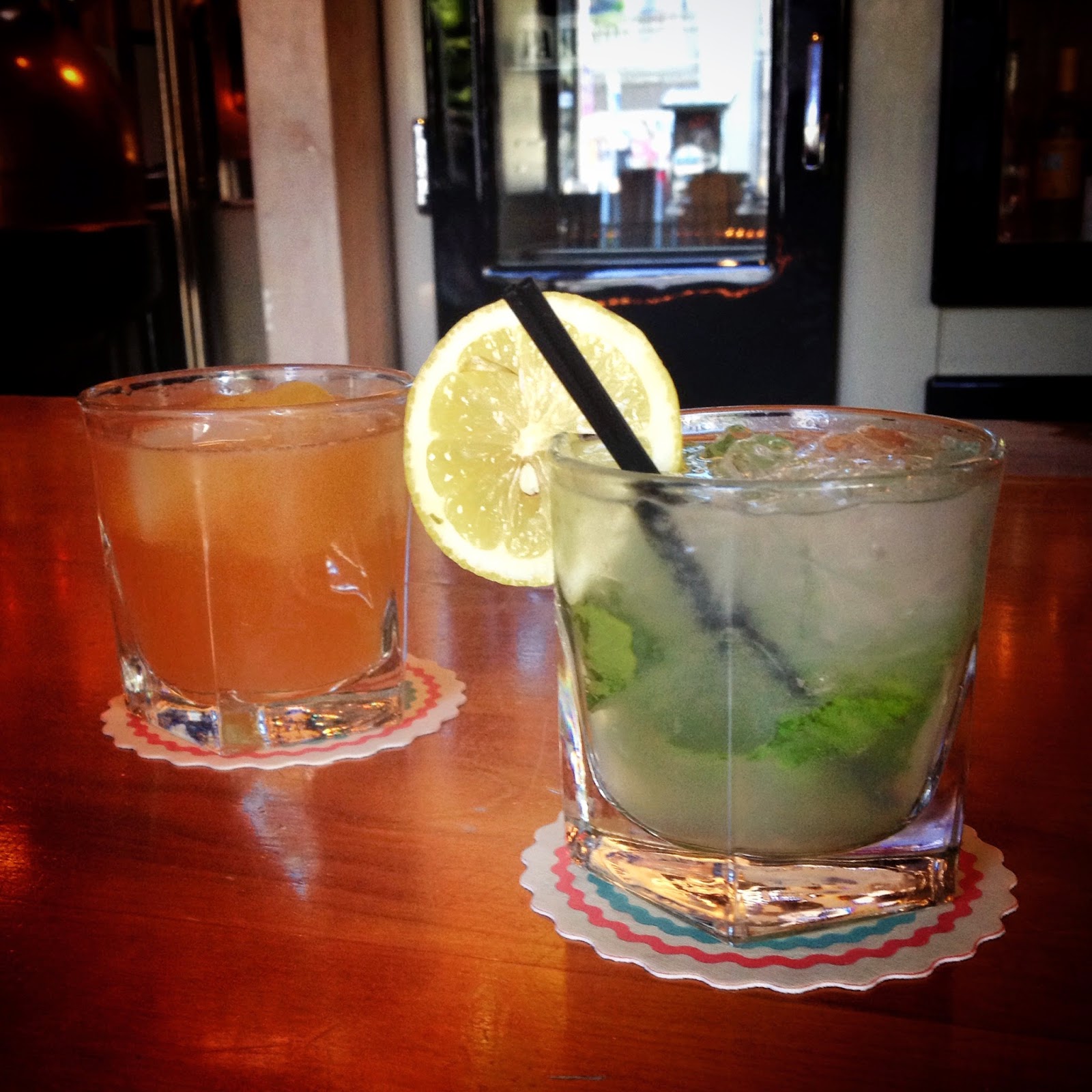 Doug ordered a Between the Sheets, made with Sun rum silver, brandy, curacao, and lemon juice and that was super tasty too. We also tried a Flight of Spirits with Sun's Hedge Trimmer Gin, Gun Club Gin, and Barrel Aged Rum. While I do identify as a gin girl, I have to admit that it was a little hard for me to sip that gin straight, as smooth as it was. I think I'll definitely stick with cocktails next time around. 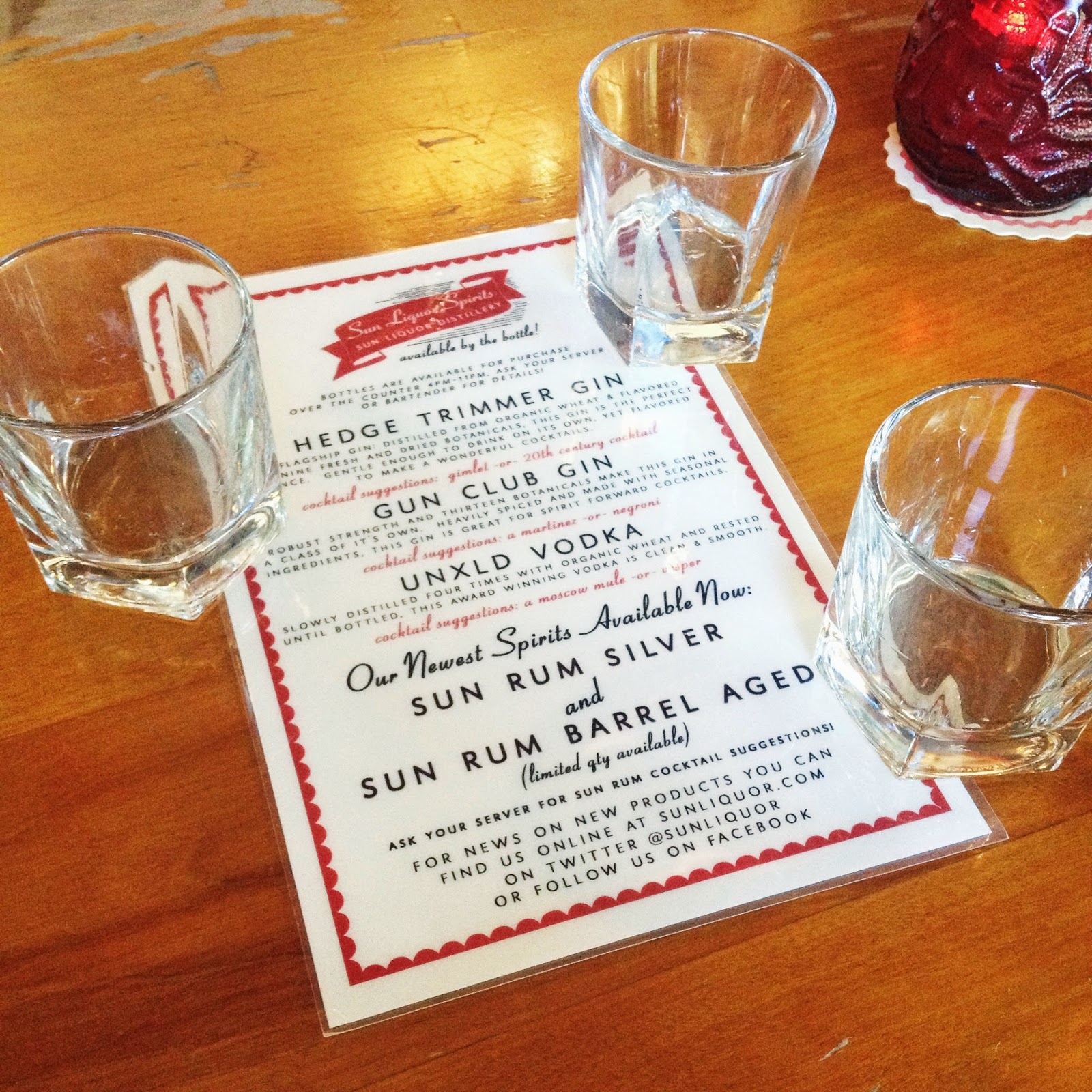 Stay tuned for more about our weekend in Seattle including dinner at the amazing Mamnoon and drinks at Canon, my second favorite cocktail bar (Drink, you're still first).