Last time we talked restaurants in my hood, I gave a less-than-steller review of Swift & Union (I still stand by my advice to go with a burger and beer and call it good). Even though they opened around the same time, unlike Swift & Union, Mama San Soul Shack got much less fanfare ahead of its opening (aside from some very cryptic posts on the St. Johns FB page), but it did get a great review by The Oregonian back in November, so I guess you could say good things come to those who wait (for publicity). 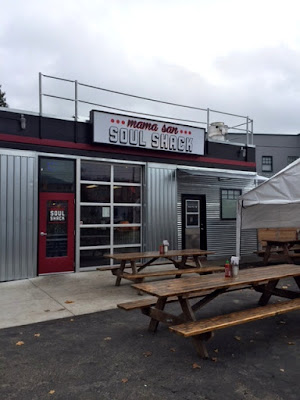 I love Ben Waterhouse's opening paragraph from that piece because I think it perfectly sums up what's going on at Mama San and in St. Johns in general:

If any residents of St. Johns remain unconvinced that the neighborhood's days as an isolated throwback full of unironic dive bars and typewriter repair shops are over, they need look no further than Mama San Soul Shack, a Vietnamese-Japanese-Southern-Mexican fusion joint opened in a former doughnut shop in September by former employees of Tasty N Alder and Trifecta. It's the sort of place that makes Los Angeles food writers drool and neighborhood preservationists lose sleep. It's also a pretty excellent place for lunch.

A great summary and I have to agree with Ben- Mama San is an excellent place for lunch, and dinner too for that matter.

I first tried Mama San when Anna and I stopped in to grab lunch after running a few errands. We decided to split a Banh Mi ($10) and the Classic Mac and Cheese ($5). 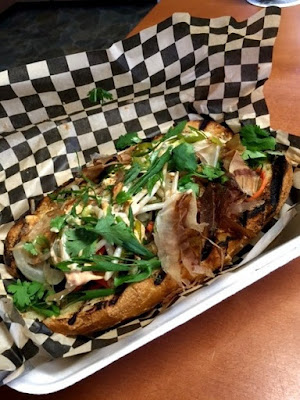 My favorite banh mi in the city is the pork meatball banh mi at Lela's Bistro, which is the polar opposite of Mama San's. Lela's is very simple with small, broth-steamed meatballs and crisp carrots, cucumbers, and cilantro. Mama San really packs it on with huge pork meatballs, a liberally-grilled baguette (which was my favorite part), and tons of pickled veggies, sriracha mayo, and bonito flakes. And really, I love them both. Sometimes you're looking for big, bold flavors (like at Mama San) and sometimes you want something less complicated. And sometimes you don't want to drive across the St. Johns Bridge for your banh mi which is where Mama San's version definitely has the upper hand...

Plus, Mama San's banh mi is big enough to share for lunch- especially if you're supplementing it with mac and cheese. 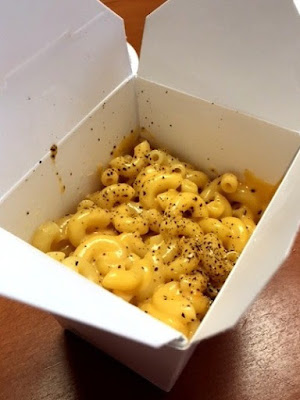 The mac is appropriately cheesy and delicious, but it is pretty basic. There's also a curry option which I think could make things a bit more exciting. 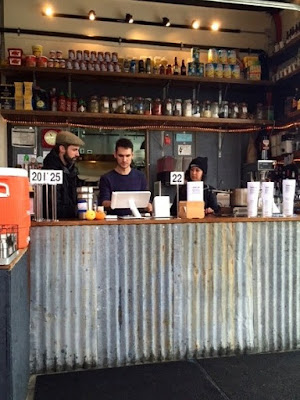 Following that initial trip with Anna, Doug and I have gotten take-out from Mama San's a few times, but we really do need to go back and eat there so we can try some of their Purple, Green, or Pink Drinks which are made with house-squeezed juices and apparently made even better with a splash or two of booze. We also need to try their various bowls and I know Doug wouldn't say no to an order of their chicken wings. See you soon, Mama!
Posted by Katie @ Happy Hour Honeys at 2:14 PM