Kel and I have written before about how important it is for us to always be truthful about our experiences. That includes when PR companies invite us to tastings and when we really, really want to like a place.

Swift & Union is one of those places that I really, really wanted to like. It's not often that Eater covers the opening of a restaurant in our part of town, so Doug and I were pretty excited to give Swift & Union a try. 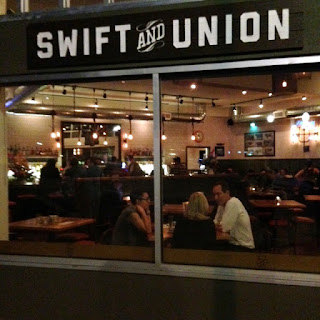 We've visited on three different occasions in the last couple of months: first, for dinner on their opening day, then with Kelly and Adam for a double date, and finally for happy hour at the bar. The overall verdict: ehhhh, it's fine.

On our first visit, Doug had the Swift Burger ($13) with bacon jam, lettuce, and aged cheddar on a brioche bun and I tried the Fish & Chips ($15). Doug really enjoyed his burger but my fish and chips were cold by the time they got to our table (opening night thing, I'm sure) and the fish had an odd bitter aftertaste (not an opening night thing?). 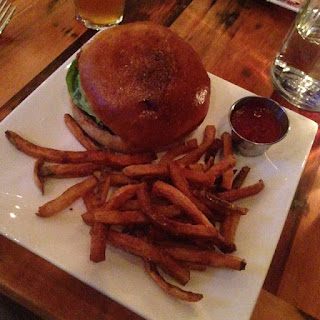 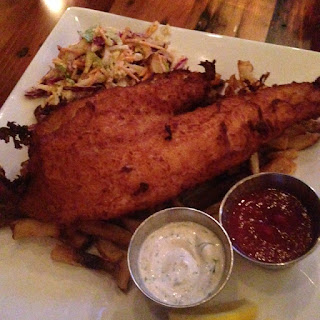 It's never fair to judge a place so soon after they've opened though (unless, of course, a PR company invites you to), so we knew we needed to give it another shot.

Our second visit came a few weeks later with Kelly and Adam. Swift & Union's cocktails sounded pretty tasty so Kel and I gave them a shot. I tried the Derby Hound ($7) with vodka, grapefruit, lavender bitters, and campari and Kelly went with the Rose Garden Party ($8) made with gin, aperol, lemon, simple syrup, sparkling wine, and basil. I expected mine to be a glorified greyhound and for Kel's, we expected a savory, refreshing drink. 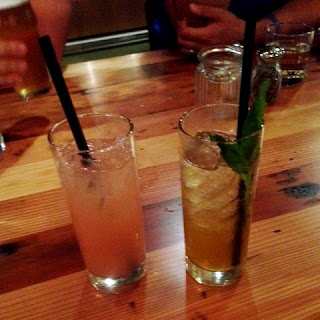 Kel and I never send back drinks. Never. (Okay, actually, we do at Elephant's sometimes but that's because we know the bartender and he should know what we like by now.) Usually we just drink whatever it is (cuz alcohol) and get on with our lives. But my drink was probably one of the worst cocktails I've ever been served. There was no sense of balance, just GRAPEFRUIT!!! and LAVENDER BITTERS!!! Whoever made that drink could not have tasted it before it was served. Kel's drink was not nearly as bad but it was definitely made with way, way too much simple syrup. So we sent them back for glasses of rosé instead... and felt terrible about it the whole rest of the meal. But really, those cocktails were not okay.

For food, I ordered the Salmon Burger ($13) with sweet corn relish, lettuce, aoili on ciabatta; Kel had the Lamb Burger ($13) with apricot, mint, shallots, goat cheese, red pepper coulis, and lettuce; and the boys had Swift Burgers. I thought my burger was on the small side for $13 but it wasn't bad and I think everyone else enjoyed their burgers. So overall, terrible drinks + okay burgers = meh, yet again. 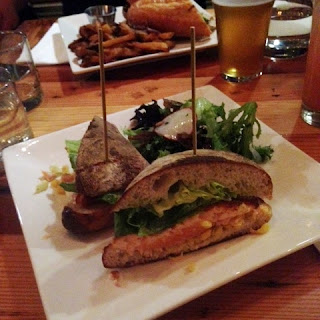 We decided to give it one more try, this time for small plates at the bar. Happy Hour is served from 4-6pm. HH drinks include $1 off draft beers and select wines and a $5 rotating cocktail. I was not going to take my chances with a cocktail again so wine it was!

Off to a great start, people! After we figured out the wine situation, Doug and I ordered the happy hour Beef Tips ($) with wild mushrooms and a sesame ginger glaze and the Corn Fritters ($3) with jalapeno honey. 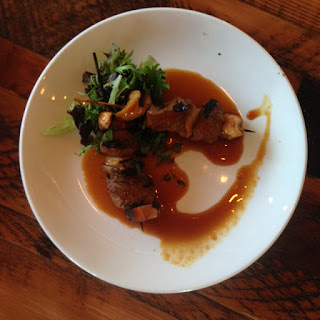 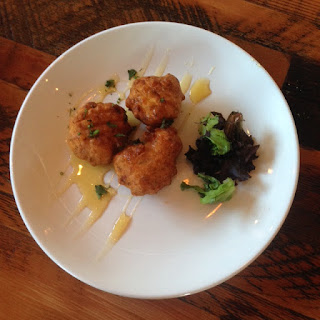 I do not know what they did to them, but I've never experienced such rubbery mushrooms before. Not good. The beef tips themselves were fine though and I liked the corn fritters even though Doug thought they were a bit bland. At least the plating was nice?

So to conclude... I'm sad. I wanted to like Swift & Union so much but after three tries, everything was just okay at best, and really, really bad at worst. My advice: If you're going to go, order a burger and a beer and you should be safe.
Posted by Katie @ Happy Hour Honeys at 1:12 PM