A few weeks ago I made the trip down to Guatemala to visit my friend Doug (check out his blog here). Doug is interning for Semilla Nueva, an organization dedicated to sustainable agriculture development, but he took the week off to show me around the country.

Doug met me at the airport in Guatemala City and, since Guatemala City is not a very safe place for anyone, let alone gringos like ourselves, we immediately set off for our first destination: Lanquin. 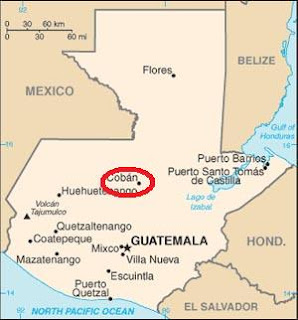 Lanquin is about a 6 hour bus ride from Guatemala City. We started out a little bit late so we ended up staying in a city about 2 hours from Lanquin called Coban.

Not much happening there but I was introduced to a unique Guatemalan method of soda consumption: sipping from a plastic bag. 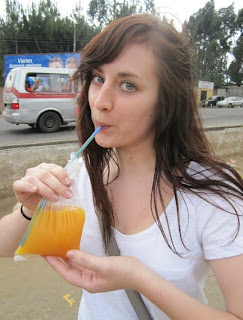 Doug explained that a lot of vendors prefer to put soda or juice in a plastic bag when they sell it so they can then return the plastic bottle for cash. Makes sense to me.

After our quick overnight stay in Coban, we met our tour guide for the day, Tony, and drove out to Lanquin. We dropped our bags off at our hostel and then headed out to Semuc Champey, a series of small pools on a natural land bridge that crosses the Cahabon River. 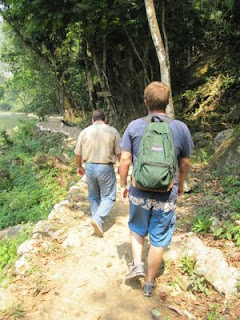 Before we hit the pools, we first took a tour of the K'anba Caves. I really wish I had pictures of this because it was probably the coolest adventure-type thing I've ever done.

Before we entered the caves, we were instructed to strip down to our swimsuits and tie our flip flops to our feet. Hmm. It made sense later. At the entrance to the cave, we each received a candle to hold and then followed our guide into the darkness. A few feet in, we came to a pool. In jumped our guide, swimming through the pool with his candle raised in one hand. We followed. So went our tour through the various caverns. There were rope ladders to climb up, narrow rocks to squeeze through and even a 14 ft. jump from the rocks into a pitch-black pool. Pretty awesome stuff.

Following our tour of the caves, we took a leisurely float down the river in inner tubes. Super relaxing. 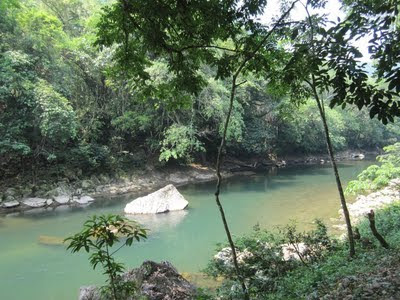 Then it was back in adventure mode as Tony scampered up to El Mirador, a look-out point, with Doug and me in hot pursuit. It was only a 30 minute hike but by the end I could barely catch my breath and was sweating buckets. It wasn't pretty. But the view from the top was: 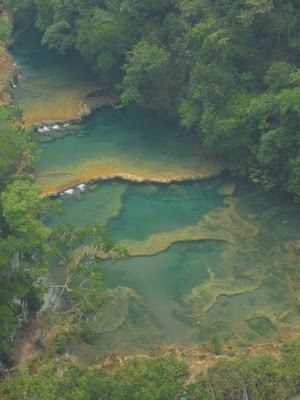 After a quick pre-packed lunch at the lookout, we made our way back down the mountain and finally it was time for a (much-needed) swim in the pools of Semuc Champey. So refreshing. I could have stayed there swimming around for hours but, all too soon, Tony said it was time to go. 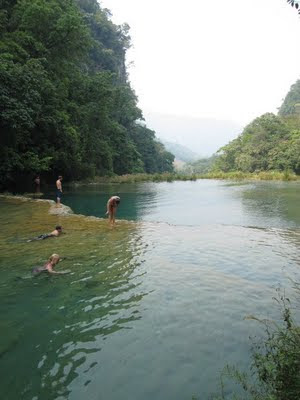 We headed back to Lanquin and got a little cleaned up before making our way over to Las Grutas de Lanquin caves to do some exploring and try to catch the mass exodus of bats from the cave's entrance at sunset. 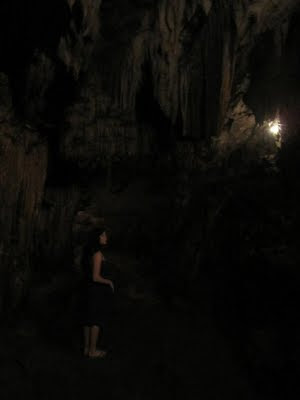 We almost gave up but eventually the bats came out in full force. One of the Guatemalan guides leading another group explained that if you caught and ate 100 bats, you would be able to fly. Doug and I agreed that it probably wasn't worth the trouble.

After that, it was time to head back to our hostel, Zephyr Lounge. Not a bad place as far as hostels go. Delicious food and drinks and a great view. 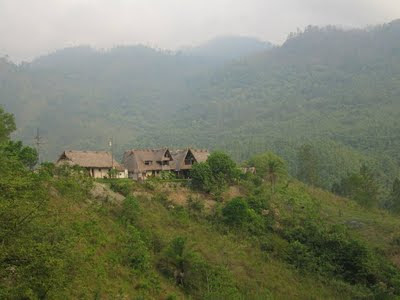 Following our big day in Lanquin, it was time to head to Xela, where Doug lives and works. Xela is officially known as Quetzaltenango but is more often referred to as Xela, a shortened version of the city's Mayan name, Xelajú. 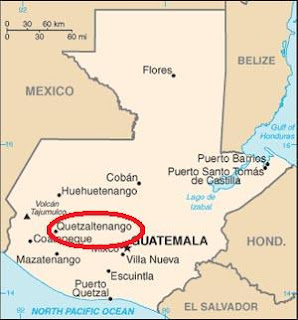 Doug and I quickly grabbed some street food for dinner around Parque Central (see below) and then met his boss Darren for tequila shots and a few beers before a group of us headed to La Rumba, a local theater that has been converted to a dance club. There was a lot of good salsa dancing going on (from the locals) and a lot of bad salsa dancing too (me and the other gringos).

The next day, Doug showed me around Xela. Our first stop was the zoo. This lion was my fave (outside of the squirrel, of course.) Regal but so sad. Love him. 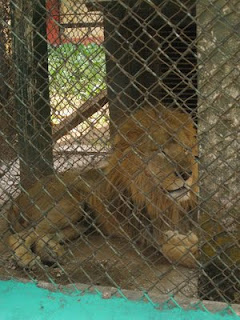 Then it was off to the markets...


... followed by a stroll through the very colorful cemetery. 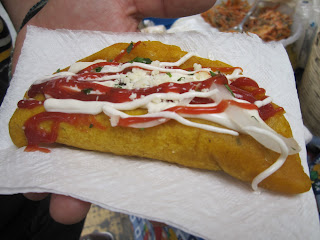 Doug had been raving about tortas so I obviously needed to try one of those too. Tortas in Guatemala are sandwiches filled with chunks of hot dog, ham, chicken and chorizo topped with mayo, salsa, tomatoes, and jalapenos. The one we got from this cart was not that good but Doug assures that me that it did not accurately represent tortas as whole. 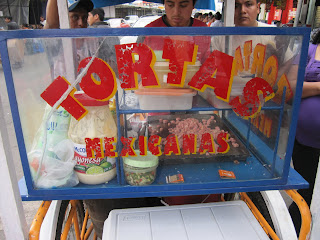 After snacks and our long walk, we needed some refreshments so we stopped at the liquor store to pick up some Quetzalteca, a super cheap Guatemalan rum, and I whipped us up some drinks using limes we had picked up from the market. 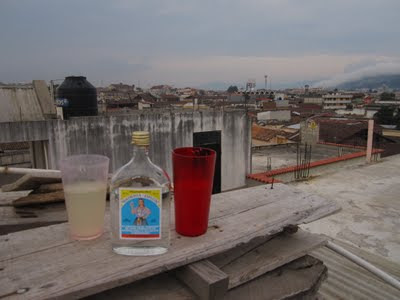 Not the best cocktails I've ever made, but when enjoyed on a rooftop with an excellent view of all of Xela, they certainly weren't bad.

P.S. You might have noticed that two of the pics I included are official "Douglas Franz" photos. Yep, he's super fancy. Read more about Doug's upcoming photo show here.
Posted by Katie @ Happy Hour Honeys at 8:49 AM