When we first moved to Boston, my roommate Shannon and I saw a lot of each other, but now that she's busy working two jobs and I have school, my internship, and work, we can sometimes go days without catching up or even seeing each other.

These last couple of weeks have been crazy, especially for Shannon, so we decided to take advantage of her Monday night off and meet up for happy hour after I was done with work.

One of our favorite places to go is Newbury Street, which I like to think of as a mix of NW 23rd St. in Portland and Santana Row in San Jose. Think tree-lined streets with restaurants, some cute and affordable stores, and then some super expensive ones too.

Daisy Buchanan's is located on the corner of Newbury and Fairfield and though I hear it's pretty poppin' on Thursdays and during the weekend, it was nearly empty when we got there around 6pm. The place definitely has a dive-y vibe complete with a funky smell, but hey, that's part of it's charm right? 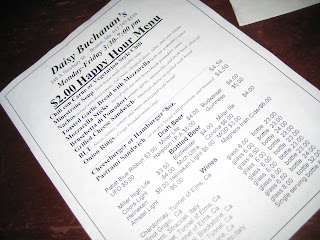 The food at Daisy's is pretty cheap anyway so that makes the happy hour prices even better. Shannon and I decided to go with the bruschetta di pomadori ($2), the onion rings ($2) (which are quickly rising to the top of my list of favorite guilty pleasures...shoot), and the hamburger ($4.50). Since Shannon's a beer drinker, I decided to follow her lead. She ordered a bud ($4) and I went with a PBR ($3). 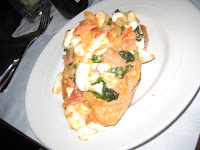 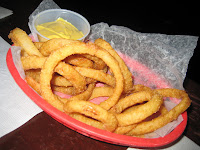 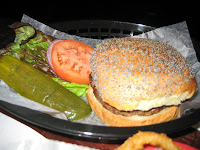 Shannon and I were expecting the bruschetta to be small pieces of baguette topped with some tomatoes and instead we got two huge slices of bread heaped with tomatoes, mozzarella and basil. Good, but I probably wouldn't order it again. The hamburger was tasty, and the onion rings, while a bit on the salty side, were nice and crispy.

I think my favorite part of our Daisy's experience, however, was our waitress. She reminded me of my friend Emi: cute and sweet, but a little spacey. When she came to get our dishes she asked how the food was and I answered that it was good. She replied "Oh really? I've never had it. But that's good. I'm glad you liked it." Um, okay....

Daisy's happy hour is one of the longest I've seen: 3:30-7pm Mon-Fri. Not fine dining but as long as you know that going in, you'll be fine.

Sip on This!: Literary Edition
(sorry, it's the English major in me)
I think it's safe to say that whoever named Daisy Buchanan's was most likely a fan of F. Scott's Fitzgerald's The Great Gatsby. Fitzgerald relied heavily on his own life experiences to create his characters and Daisy Buchanan is believed to have been inspired by Fitzgerald's own youthful romance with Chicago heiress Ginevra King.
Posted by Kelly at 9:19 AM