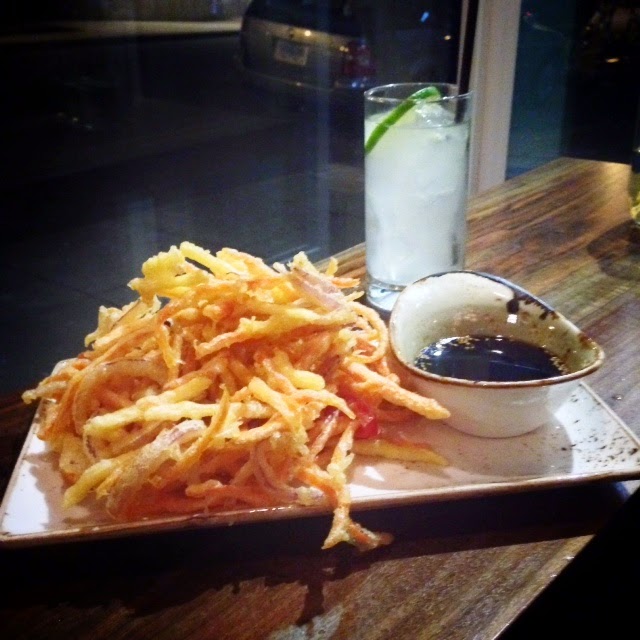 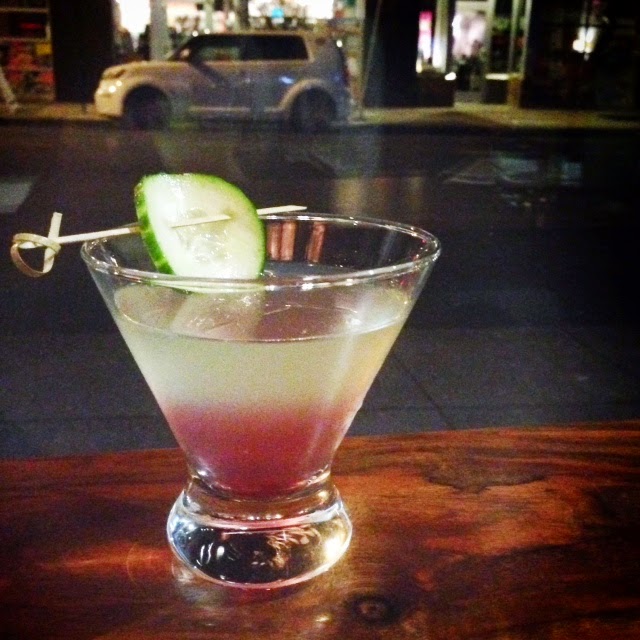 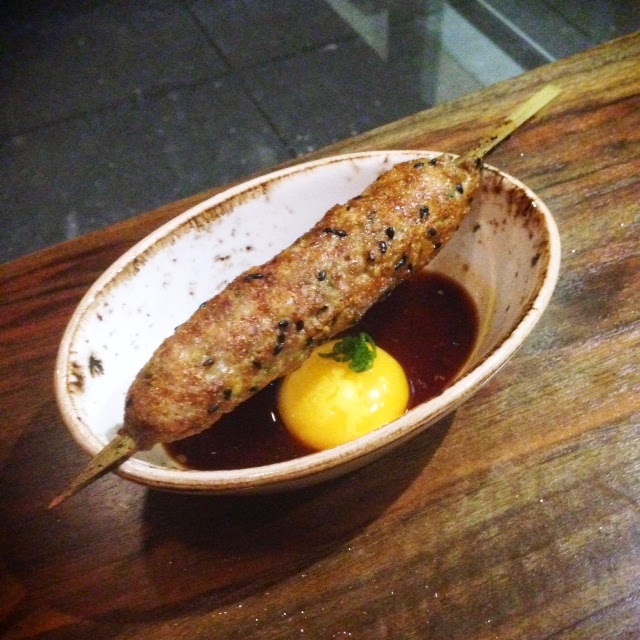 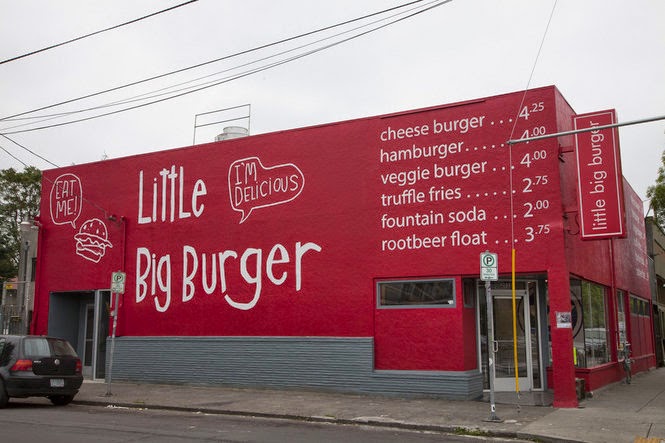 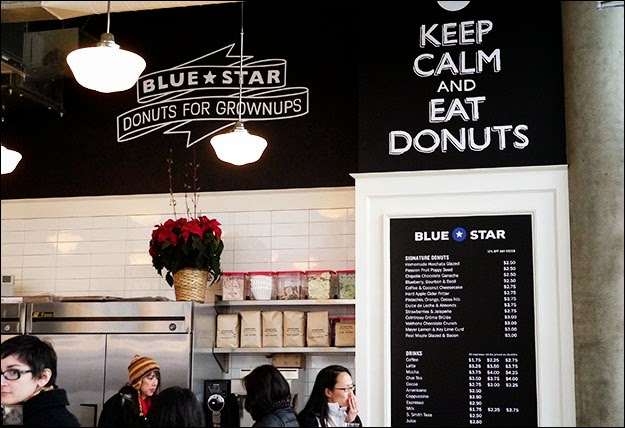 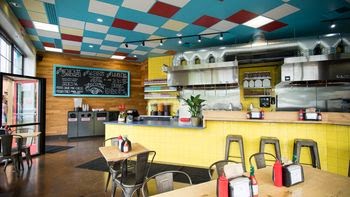 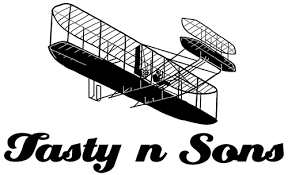 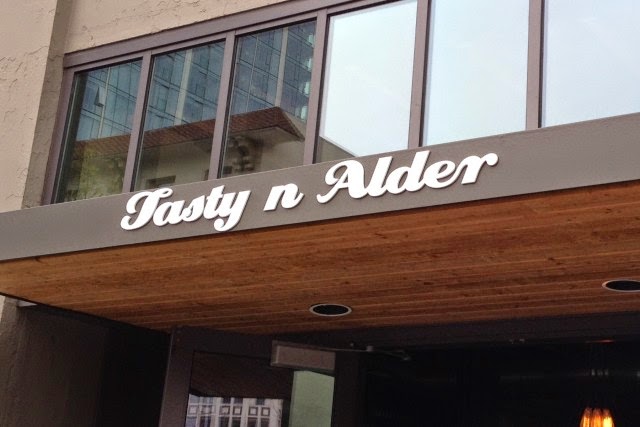 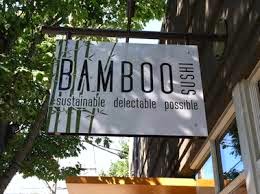 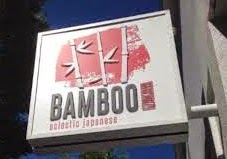 You know that problem that Katie and I have with Boke Bowl? The one where it's good, it's really good, but it's missing... something. We're left wishing there was a little something more. Especially for the price. It's not expensive, but it costs just enough that we are left wanting... something. Well, we recently had that same experience at Smallwares on NE Fremont.

I'm going to break it down in the order that items arrived. Our night started with the Brussels Sprouts ($8) in XO sauce with almond brittle and nigella seed. The sweetness of the almond brittle was a nice compliment to the savory brussels, but the portion is pretty conservative.

Our second dish, and probably our second favorite, was the Scallop Sashimi ($11) with yuzu butter, vadouvan, bottarga, shiso. Again we ran into the issue of feeling like $11 was on the high end for the thin slices of scallop, especially with Daruma down the street. But in terms of flavor and presentation, we'll give it a thumbs up.

Next up. Cocktails. Yes, they took a while to materialize. There was a private party in Barwares and the front of the restaurant seemed a bit overwhelmed. I got The Gin ($10) with gin, becherovka, lillet rouge, and amargo valet and Katie went for The Vodka ($10) with vodka, benedictine, lime, black pepper, and bitters. Katie didn't mind hers but I thought they were both too reminiscent of cold medicine, perhaps too heavy handed on the bitter liqueurs.

We finished our Smallwares experience with the Clams ($13) with Chinese sausage, black bean sauce, ginger, and garlic. This was our favorite dish. The clams in the black bean sauce was unique and the basil pieces soaking in it were a welcomed surprise and pop of fresh flavor.

Our dinner and drinks totaled $52 but we were still kind of hungry and the drinks weren't that satisfying- and we weren't so in awe of the meal that we didn't care. Thankfully it was just Katie and me. If the boys had joined we would have had to order at least double and it would have been a pricey night out.

Maybe we're just too cheap, or our expectations are too high. How do we know for sure? More research! Tanuki is also on our list of Asian-influenced tapas-style places to compare with Boke Bowl and Smallwares. (Bamboo Izakaya was too but not anymore.)

Posted by Anonymous at 3:04 PM 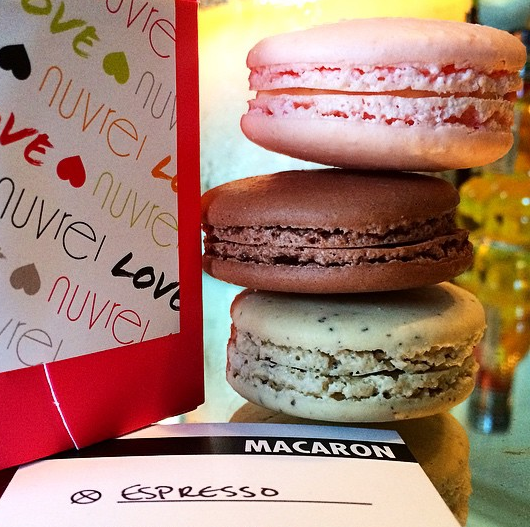 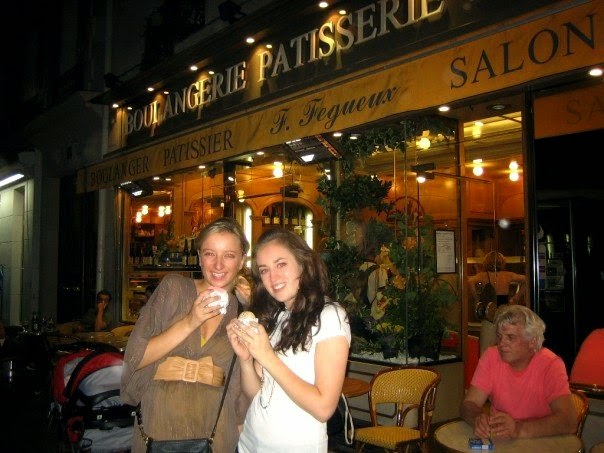 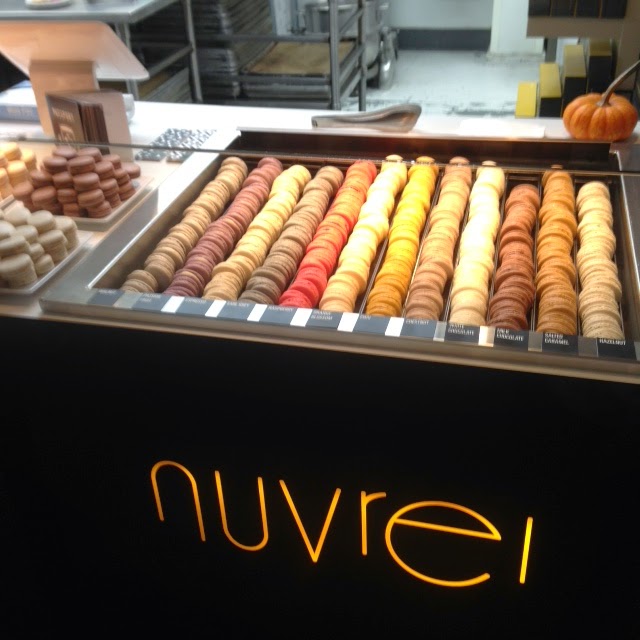 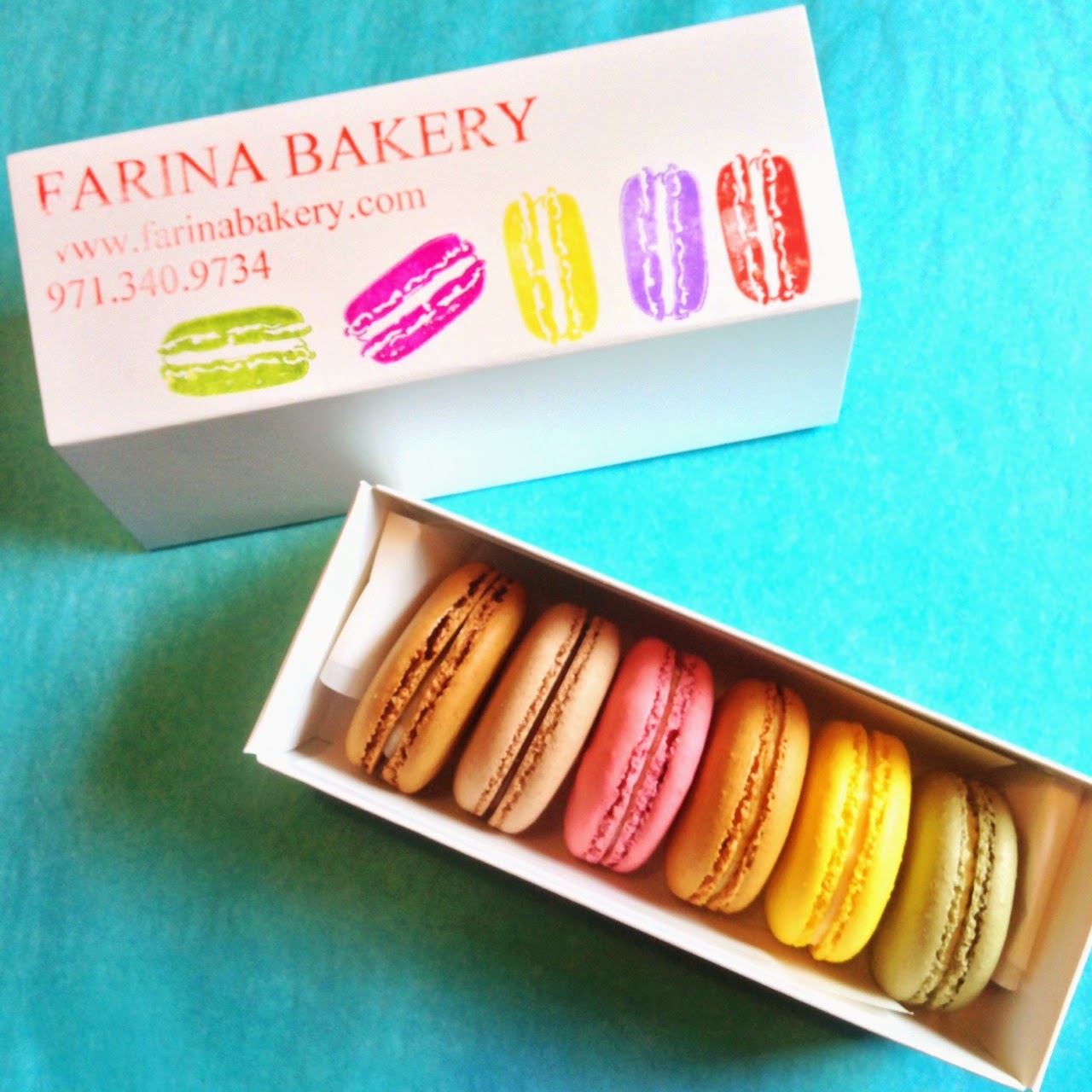 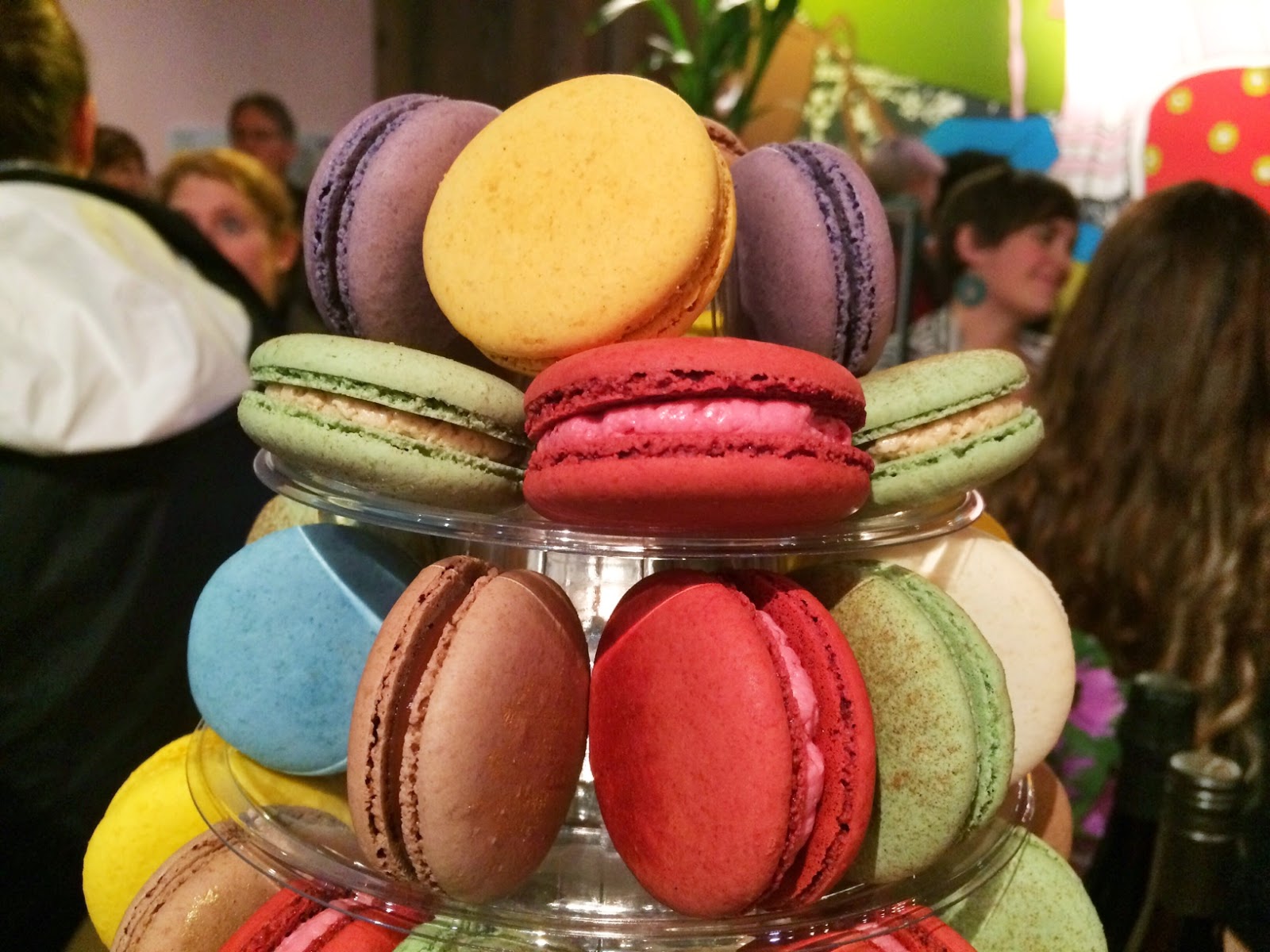 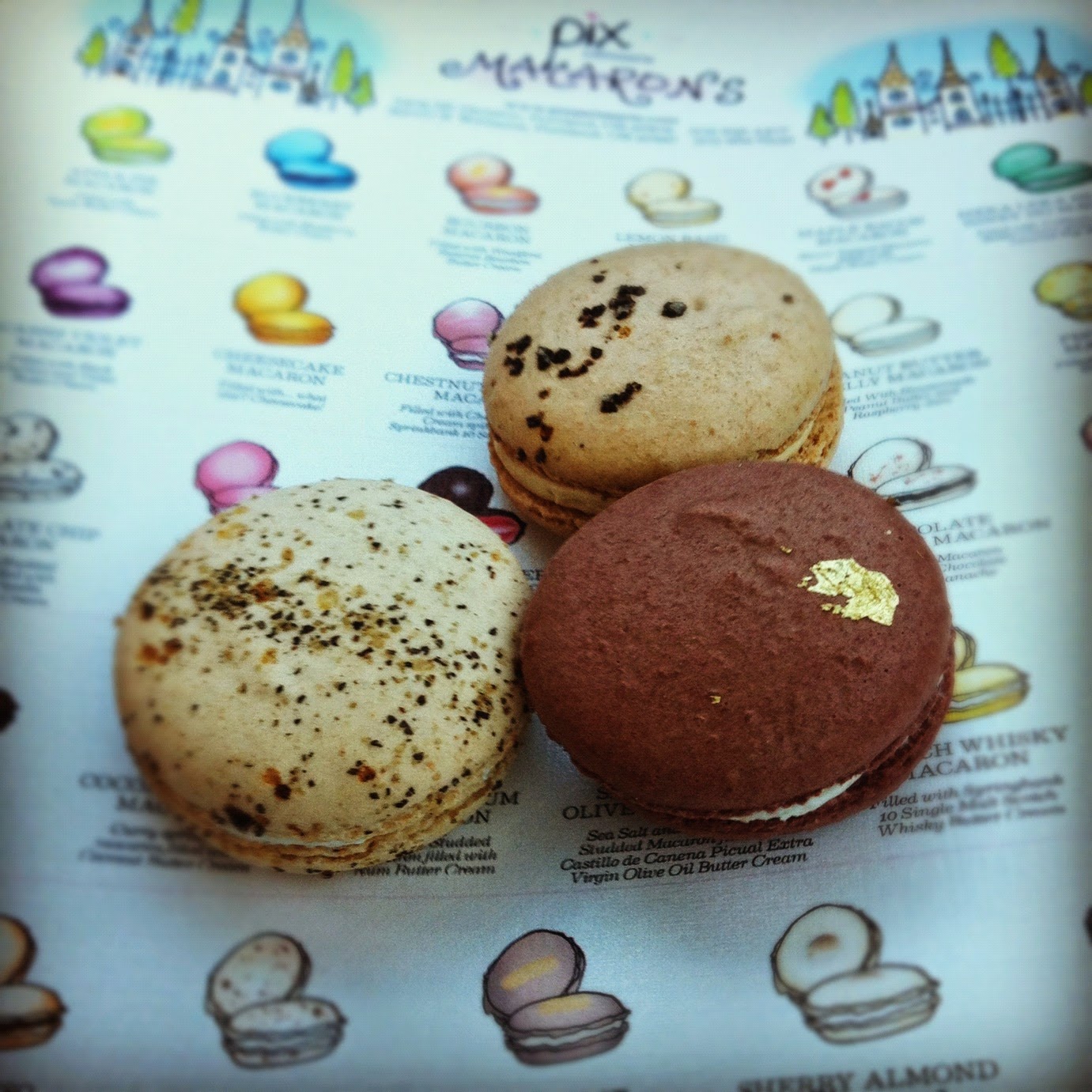 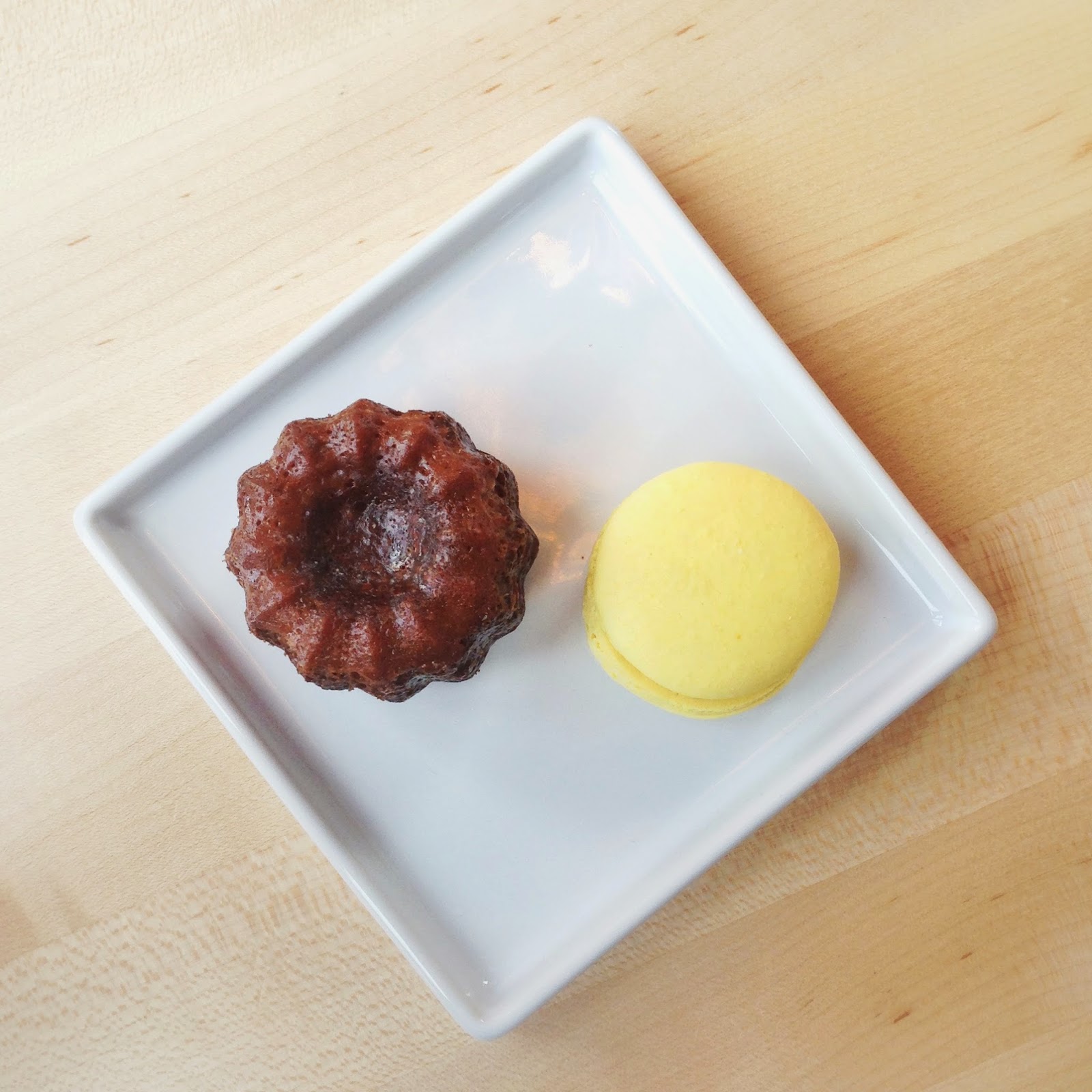 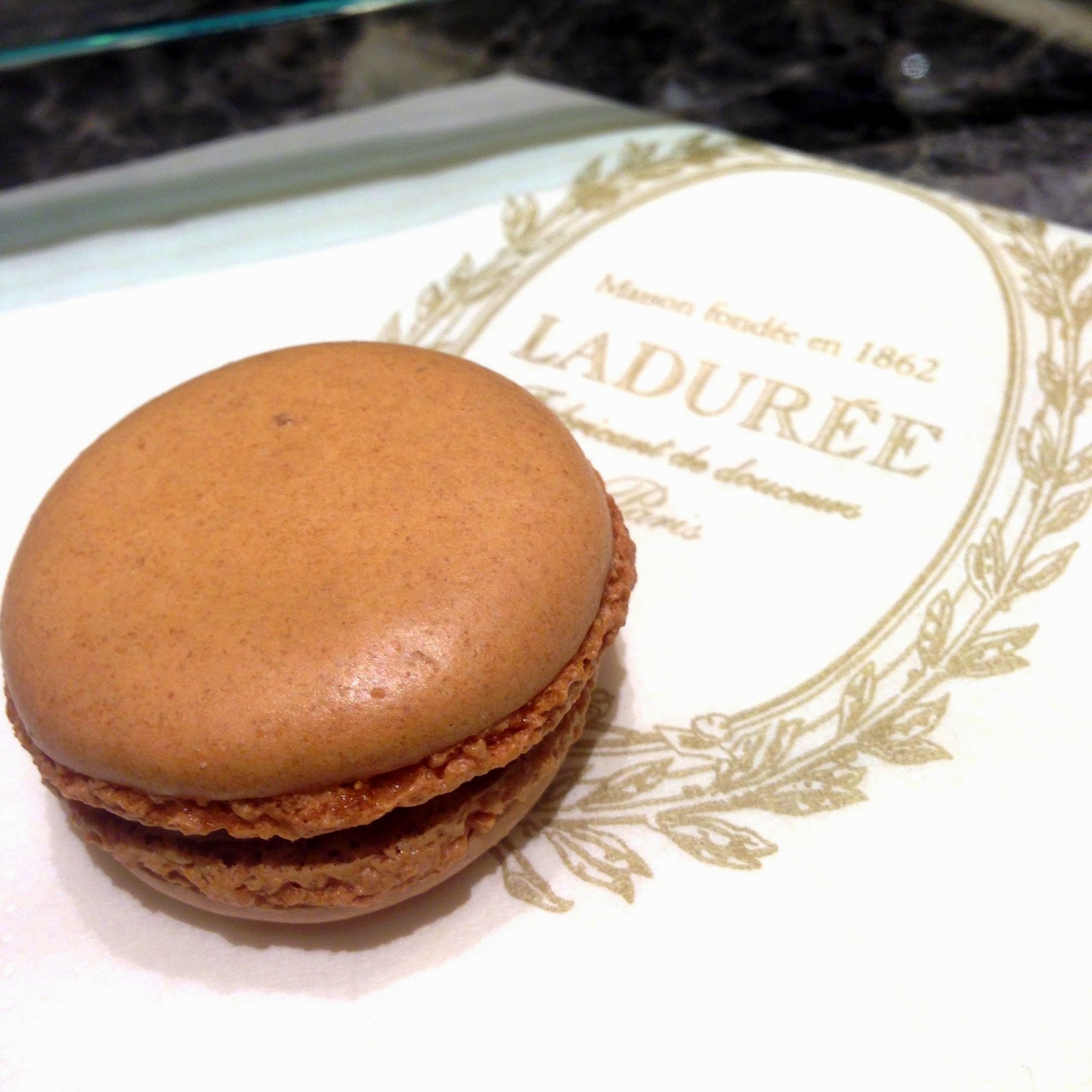 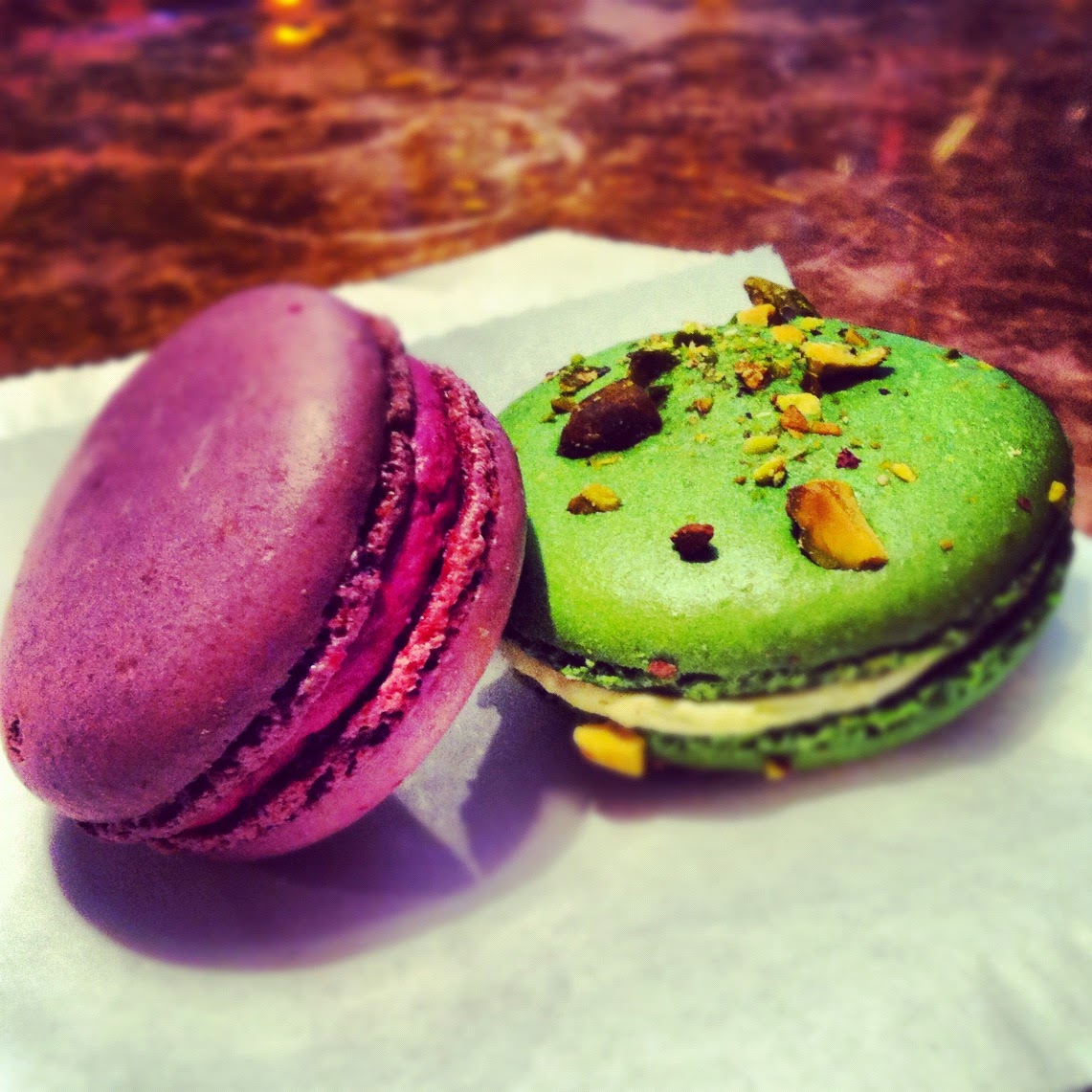 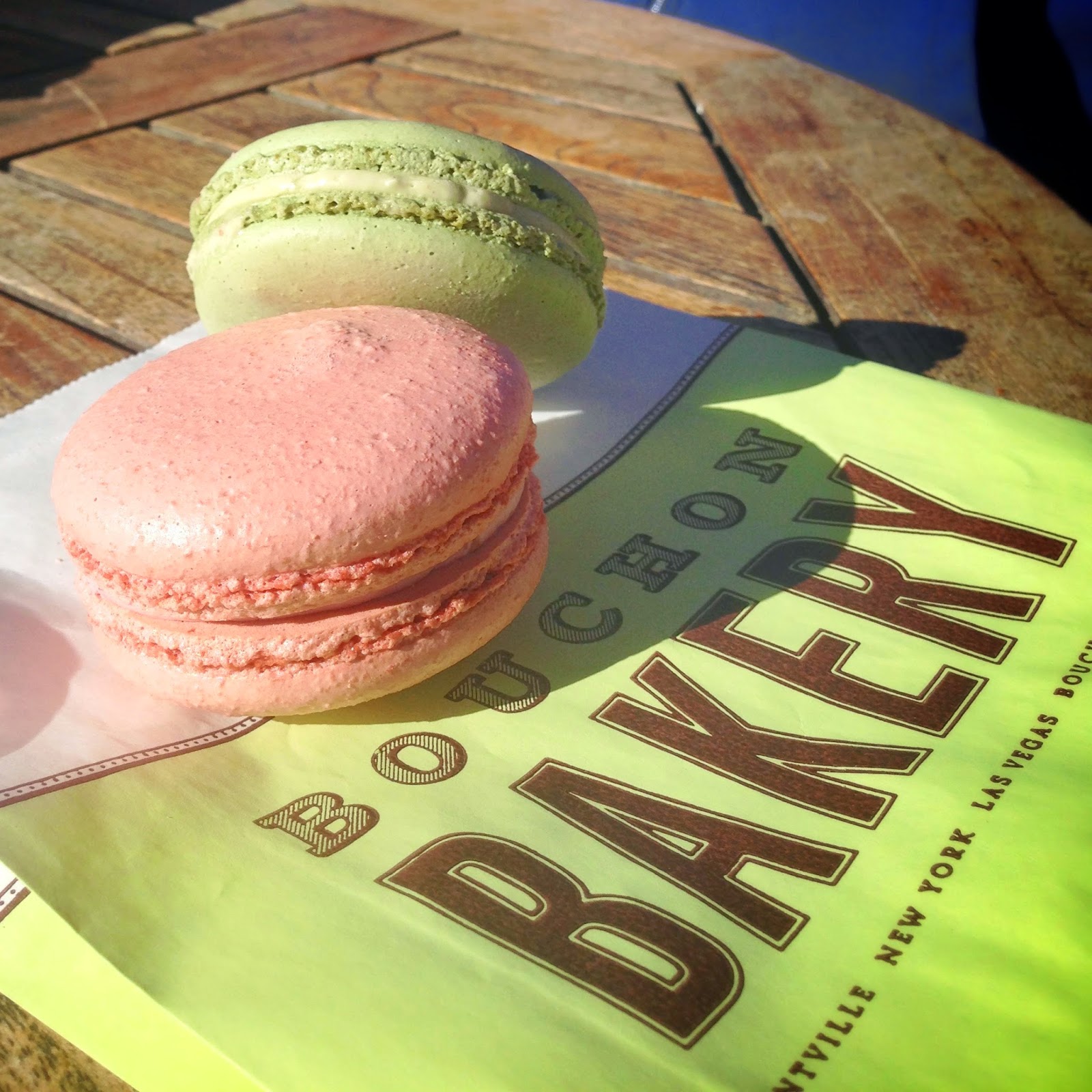 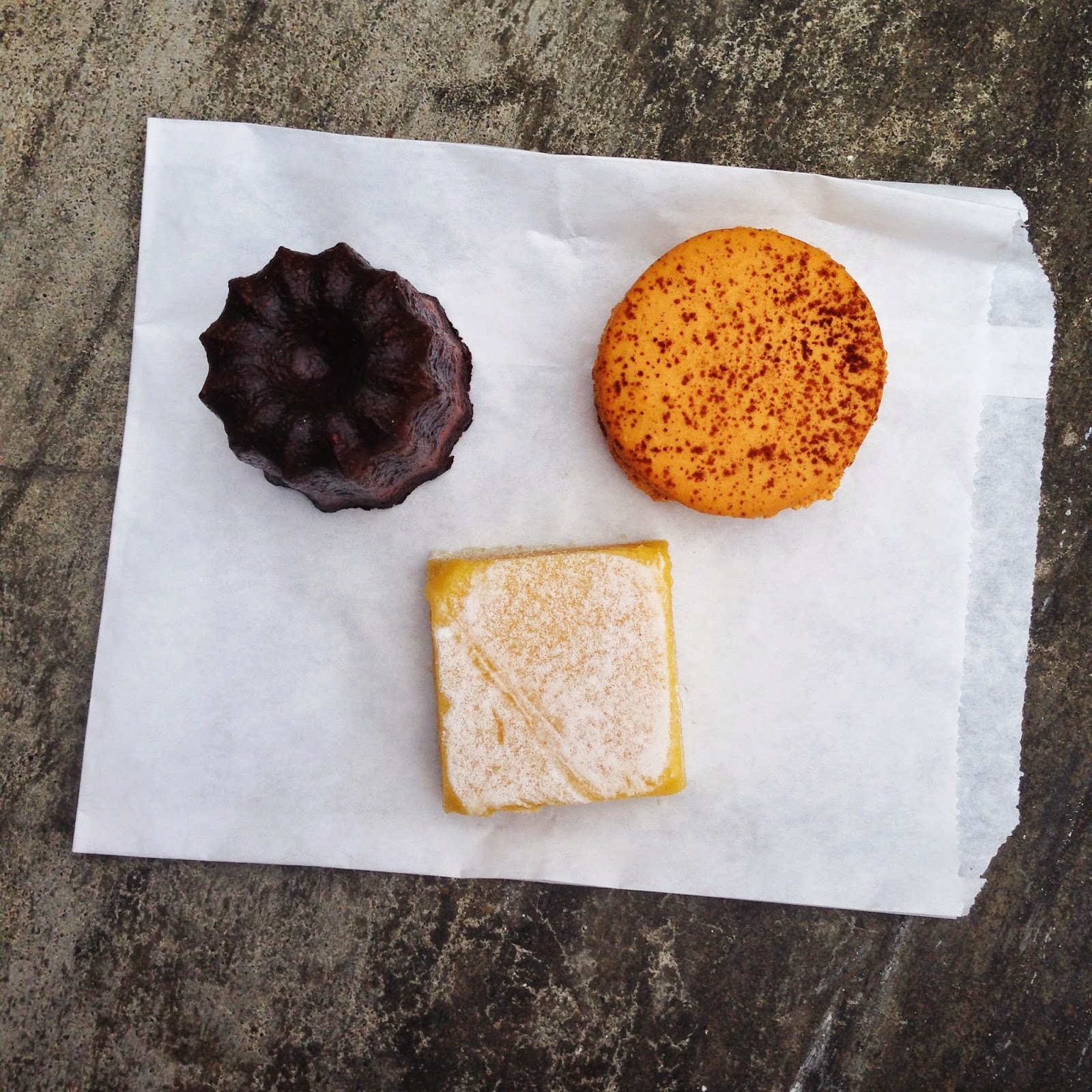 I started a job at Children's Cancer Association about a month ago and along with new office digs comes the critical task of finding new coffee shops and lunch spots in close range. Coffee spot? Check. Ovation on NW Overton and 9th serves up a good latte and chai tea. Lunch spot? Check. In addition to Lovejoy Bakery and pretty much everything else closer to Naito in the Pearl, I have a new option! This took a little longer to find due to my initial lofty goal of packing lunch daily to be healthy and save money, but I was finally introduced to Breken Kitchen by some co-workers.

The menu breaks down pretty simply. Soups, sandwiches, bowls, and a lasagna of the day. Clearly I was initially tempted by the cheesy carb-loaded lasagna option, but per a recommendation and a slight obligation to my lunch-time goals I ordered the Breken Draper Chicken Bowl ($9.95) with brown or Jasmine rice, black beans, corn, pickled onions, cherry tomatoes, avocados, chimichurri and house made salsa.

The bowl is simple, but tasty and filling. Something that I could easily recreate, but it's definitely the kind of thing that tastes better when someone else makes it... and puts chimichurri sauce on it.

In my subsequent visit I tried the Albacore Tuna Melt ($9.50) with a simple green salad. The tuna is super simple and the sandwich only includes Tillamook Cheddar, so the star of this show is really Grand Central's fluffy Big Country Bread. It's really very simple comfort food, so maybe $9.50 is a stretch. I think at a future visit the Grilled Cheese and Tomato Soup ($6.95) will still provide the benefit of that delicious bread, but for a slightly better deal.

Breken Kitchen also serves breakfast (yet to try) and sports a decent beverage menu. I ordered a latte made with Water Avenue Coffee and later saw that they have wine, cava, and beer. Drinking lunch anyone? Obviously only on Fridays when I work a half day...

Cute vibe, wifi, good food - simple, but satisfying - and multiple drink options. Probably best I didn't know about this when I was working from home. ﻿