Katie grew up on a steady diet of mac & cheese and cookie dough but has since expanded her dining preferences. A native of San Jose, CA, she graduated from Emerson College in Boston with her masters in Publishing and Writing. A freelance food and travel writer, Katie has written for Time Out Boston, Back Bay Patch, City's Best Boston and Travel + Leisure.com. She currently lives in Portland and works at her other alma mater- UP.
pdxhappyhourhoney2@gmail.com 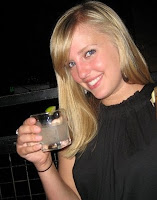 Growing up on Whidbey Island in a family passionate about food and drink, Kelly quickly learned to appreciate good meals, good cocktails, and good company. These remain a passion, and she is currently working on her "beerducation". A graduate of University of Portland, Kelly lives in Portland and works as an Event Specialist for the Children's Cancer Association.
pdxhappyhourhoney@gmail.com


about happy hour honeys
Sophomore year of college, due to luck, chance, and some roommate confusion, Kelly and Katie met in the dorms at the University of Portland in Oregon. They soon realized that not only did they share a love of eating LIFE cereal right out of the box, they were also both passionate about spending time with friends, having fun, and exploring Portland's restaurant scene.

Over the next two years, Kelly and Katie continued to bond over treks to IKEA for hot dogs and froyo, Bellas and sweet potato fries at Mint's happy hour, and nights at the "T Room", a dive bar on N Lombard popular with UP students.

The summer before their senior year, at which point they were both officially 21, Katie began working on an article about Thai restaurants for PDX Magazine. Kelly happily joined her for a day of Thai food around Portland. Over happy hour drinks at their final spot, Katie and Kelly realized that if PDX Magazine was a good reason to eat and drink all day, than having their own blog would work just as well! So in August of 2008, Happy Hour Honeys was created!

For the next year, The Honeys made it a priority to visit and document as many Portland happy hours together as their busy schedules would allow. After graduation, Katie moved to Boston (where alcoholic happy hours are illegal-sad!) and Happy Hour Honeys became a bi-coastal operation.

Katie has returned to Portland and the Honeys are happy to be back in the same city! Their blog remains a way for them to share their explorations, recount visits to favorite restaurants and bars, and offer Do It Yourself tips.