My parents were in town last weekend so of course there was lots of good eatin' going on. One day for lunch, we headed out to Good Food Here for lunch at one of my and Doug's favorite food carts: Viking Soul Food. 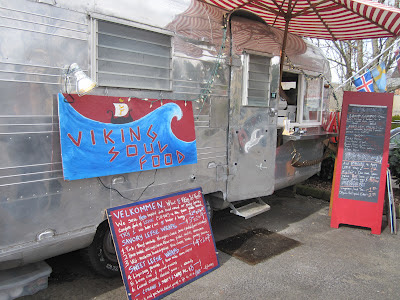 Viking Soul Food serves Norwegian-inspired food. Their focus is on savory and sweet lefse (lef-suh), crepe-like flatbreads made with potatoes, which they serve burrito style. Daily specials are also available. 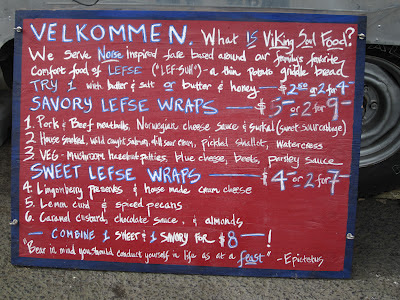 My mom, my dad, and I decided to each try a savory and a sweet lefse- the combo goes for $8. 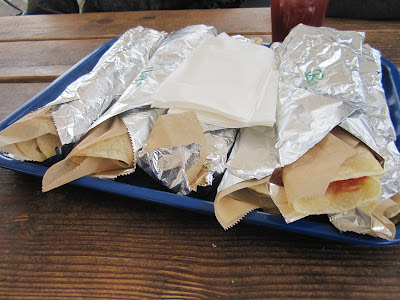 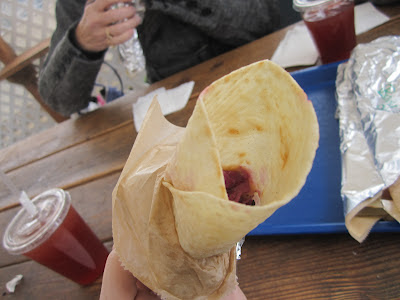 Jeremy, one of the owners, was smoking up fresh salmon as we waited. Love that!

I chose the Norse Meatball Lefse made with pork & beef meatballs, Gjetost sauce (a creamy cheese sauce made with leftover goat cheese that has been caramelized), and pickled cabbage. 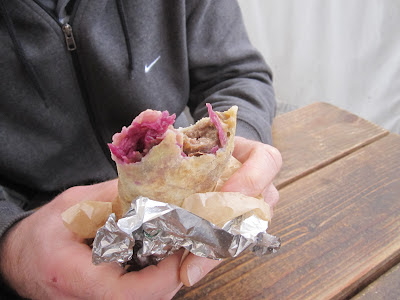 The Gjetost sauce has an unusual flavor that I'm not quite sure I've tasted before. It's sweet and nutty and definitely makes this lefse as unique as it is delicious. This is my go-to at Viking Soul Food.

My mom had the Mushroom-Hazelnut Lefse made with mushroom-hazelnut patties, Rouge blue cheese, beets, and parsley sauce. 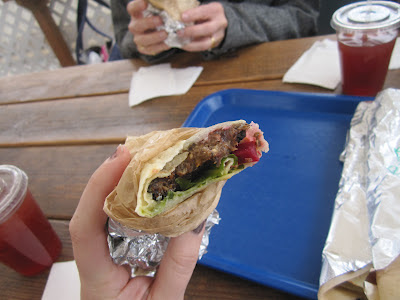 My mom loves blue cheese so she was happy with her pick but I thought the cheese overwhelmed the flavor of the mushroom-hazelnut patties.

For dessert, my mom and I both chose the Lemon Curd Lefse made with lemon curd and spiced pecans. 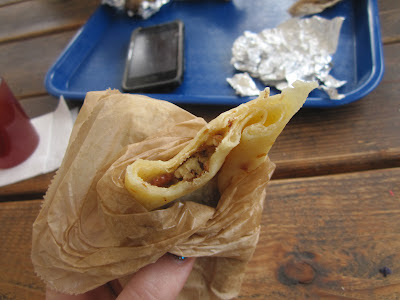 Both of us would eat lemon curd straight up any day, so these were a big hit. We also loved the little crunch that the pecans added.

My dad ordered the Lingonberry Lefse made with local lingonberries and housemade cream cheese. He's a fan of bolder flavors, so this lefse wasn't his favorite. I'd choose the lemon curd over this one too.

I think my parents enjoyed their first taste of lefse and I know I'll be back soon- maybe with Doug's parents when they visit next weekend!
Posted by Katie @ Happy Hour Honeys at 3:04 PM

As everyone close to the food world already knows, yesterday the semifinalists for the 2012 James Beard Awards were announced. Here are the categories with finalists I'm familiar with and who I'm rooting for:

Outstanding Bar Program: Drink, Boston
If you know me at all, you'll know this was a no-brainer. I've loved Drink from the moment I had my first drink there during my first week in Boston. The bartenders are incredibly knowledgeable yet so unpretentious. I love that. Already dreaming about the Southside I'll order when I visit in March...

Outstanding Restauranteur: Roger Berkowitz, Legal Sea Foods, Boston
Legal Sea Foods is overpriced no doubt, but it was the first restaurant I ate at in Boston when my Dad and I went to visit Emerson College, so it has a special place in my heart.

Best Chef Northeast: Jamie Bissonnette, Coppa, Boston
If Flour and Sofra comprise my top 2 in Boston, Toro makes the top 3. Not sure why Jamie Bissonnette is nominated for Coppa, not Toro, but I'm as long as he's nominated, it works for me.

Best Chef Northwest: Naomi Pomeroy, Beast, Portland & Cathy Whims, Nostrana, Portland
My dinner at Beast was one of the best meals I've ever had- if not the best- and I've only done happy hour at Nostrana, but I'd be happy if Naomi or Cathy won. Slightly more for Naomi, but you know. PDX love!

Katie, Jenna, Dana, Gina and I have been trying to make weekly, or at least every other week, happy hours together a habit. Most recently, we met at Oven & Shaker for their late happy hour at 10pm. 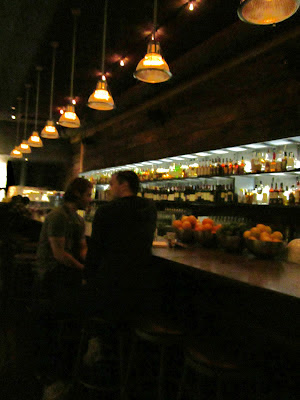 This restaurant, which opened in November of 2011,  is the baby of three popular Portland peeps: Cathy Whims of Nostrana (which we went to and still nee to blog about!), Ryan Magarian co-founder of Portland's Aviation Gin and ChefStable's founder Kurt Huffman.

It's no surprise that this trio has created a successful restaurant and a delicious happy hour featuring salads and pizzas. Unfortunately the cocktails aren't discounted, but we ordered them anyway!

I went for the Corleone Original. 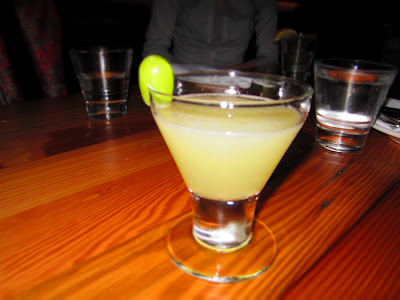 Made with seedless green grapes, Aviation New Western Dry Gin, Clear Creek Grappa di Sangiovese, freshly pressed lemon juice, simple syrup and a dash of Regan's No. 6 Orange Bitters, it was so tasty. We only had one cocktail each but I definitely would order this again! 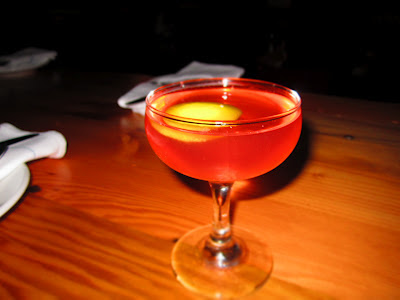 Katie enjoyed her drink, but it wasn't a hit with the rest of us. I think we all preferred the fruitiness of the Corleone.

With 5 awesome pizzas to pick from, we ordered the Margherita ($7) with tomato, mozzarella and basil and the Roasted Squash ($10) with escarole, spiced walnuts, mozzarella, and montasio, an Italian cheese made from cow's milk. 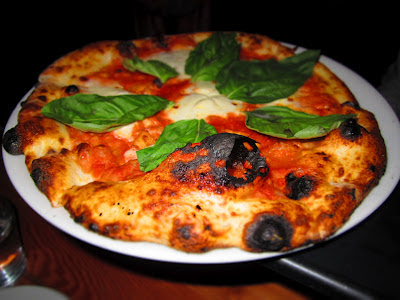 If you're looking for something simple and satisfying you can't go wrong with a classic margherita pizza, but the roasted squash offered a more unique combination of flavors. We definitely want to return to try the cauliflower pizza and reviews suggested that the Nostrana ($6) salad of radicchio, parmigiano, rosemary-sage croutons, and caesar style dressing is pretty great.
Posted by Kelly at 9:38 AM 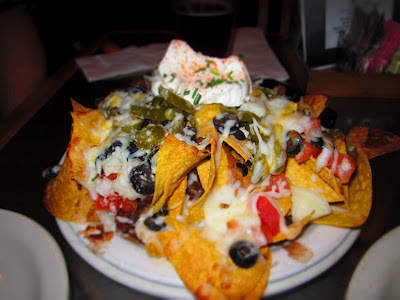 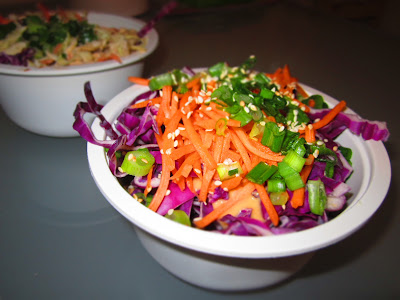 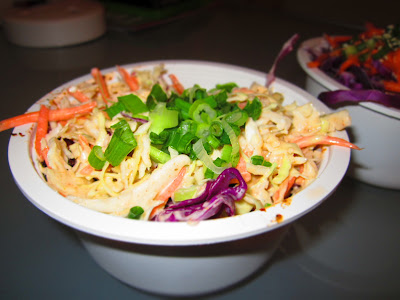 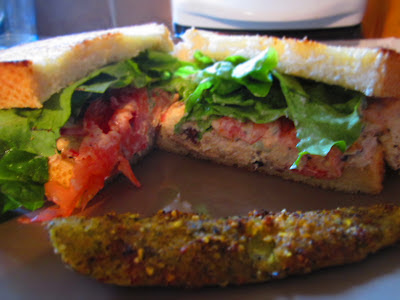 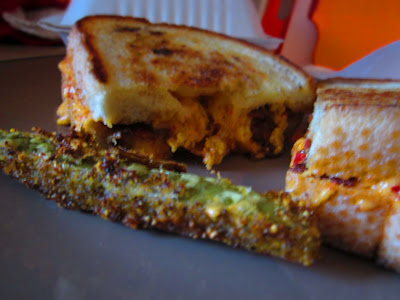 I don't think I've mentioned it on the blog yet, but Adam and I got engaged after Thanksgiving! We've been wedding planning and next on our to-do list is hiring a photographer. After meeting with a wedding photographer in SE last week Adam and I remembered we had a Groupon to Lucky Strike.

Founded in 2007, Leopold and You bring Sichuan style favorites from You's hometown. Neither have formal culinary training, but they combine fresh local ingredients and Sichuan spices to their dishes. I am definitely not an expert on traditional Sichuan flavors, but our friends Keith and Rachel have frequented Lucky Strike since Keith's visits to China, claiming it's the closest thing to the real deal that he can find here. Adam and I were excited for some great food while talking about wedding details.

A little overwhelmed by the menu and not wanting to order the typical apps like egg rolls, we asked the waiter for a suggestion. We started out with JiaoZi Dumpling in Spicy Sauce ($6). These pork and cabbage filled dumplings are served with either clear broth or Sichuan style spicy sauce. We opted for the spicy sauce, and although I can be sensitive to spice, I liked that the heat of this sauce didn't overpower it's really great flavor. 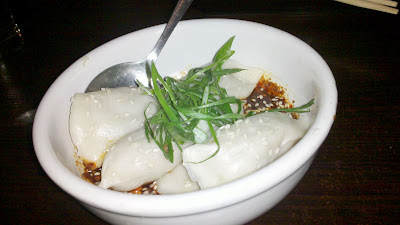 For main dishes Adam immediately spotted the KungPao Chicken ($12) sauteed with crunchy peanuts, scallion and sweet and spicy ginger sauce. This is originally a traditional Sichuan style dish and although I can't attest to it's authenticity, it had a different flavor than other KungPao dishes I've ordered. It was spicy with a lot of peppers mixed in, but the sweetness in the sauce made it one of those dishes that you keep eating for the initial flavor and the spice hits you after.  I'm not sure we would order it when we go back in place of trying something new, but it was a good choice! 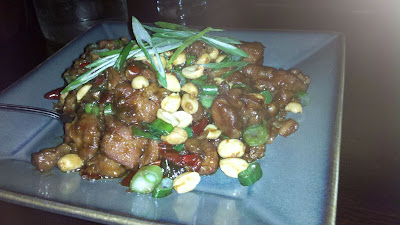 One of my favorite dishes we ordered was the Sauteed Shanghai Baby Bok Choy ($7) with fresh chopped garlic. If you don't like a lot of garlic, don't order this, but I love it so that was fine with me! The sauce on the bok choy was awesome and with the option to add tofu ($2) to this dish I would absolutely order it again. 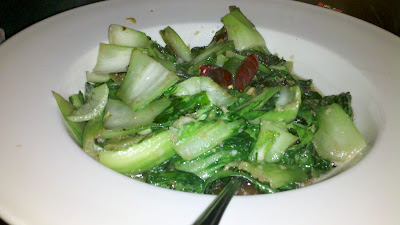 My other favorite was Dan Dan Noodle ($5). These spicy Sichuan style noodles were topped with minced beef, crushed peanuts, and fresh scallions. Adam and I both loved the flavor in this dish and for only $5 who could pass it up? 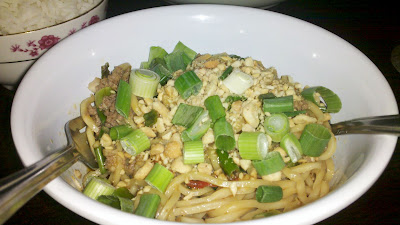 Our drinks took a long time to arrive, but once they did I think we were both pleased. I've been ordering a lot of Moscow Mules, or pretty much anything with a ginger infused vodka or ginger syrup, so I chose the Vice is Cooler ($8) with house-infused lemongrass ginger vodka, muddled cucumber and basil, citrus and soda, served on the rocks. Yum! Adam ordered the Hot Toddy ($8) with earl grey tea, lemon, honey and whiskey in the hopes it might help combat his cold. 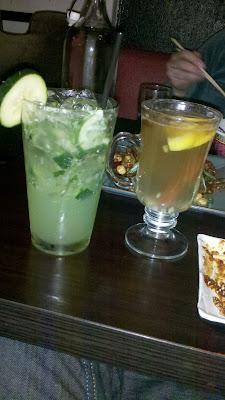 This was a great first experience at Lucky Strike, I'll be back to check out their happy hour menu featured daily from 3 - 6pm!
Posted by Kelly at 10:48 AM