North 45 is our go-to neighborhood bar when the weather's nice thanks to their large back patio. They recently revamped their happy hour menu, so Kelly, Adam, Doug, and I met up a few Fridays ago to check it out.

During happy hour, Trumer Pilsners are $3.5, well drinks are $4, glasses of house wine are $5, and house margaritas are $5.50.  Don't be tempted by the margaritas- they're cheap, but very weak. Beer and wine is probably your best bet. 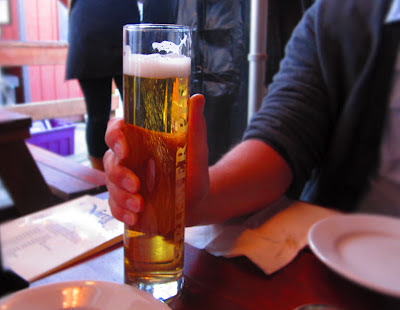 For food, we took a family-style approach. 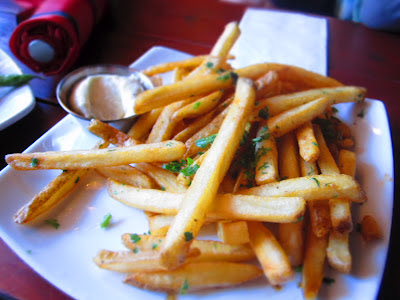 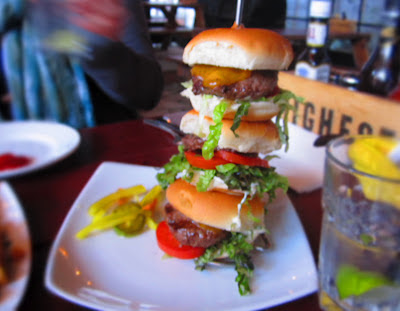 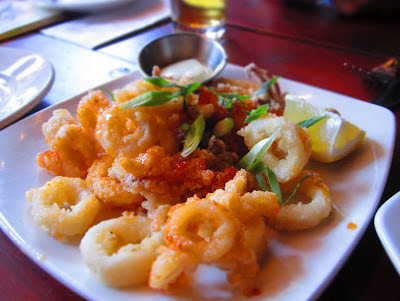 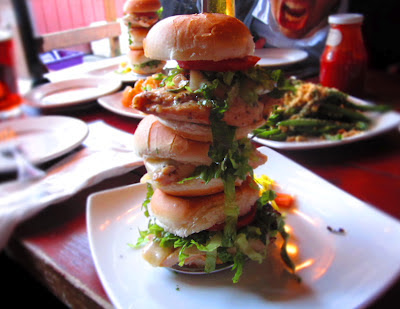 Southwest chicken sliders ($6) with tomatoes and lettuce, with house-pickled veggies. 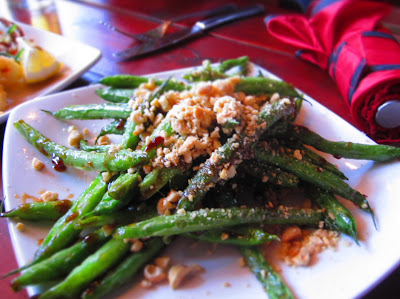 Our favorites were the calamari and the green beans. Nice to see something semi-healthy on a happy hour menu!

After sampling the new menu, we'll definitely keep North 45 in our regular rotation, and now not only for drinks!
Posted by Katie @ Happy Hour Honeys at 12:28 PM

Every other year, the teachers at my mom's school auction off a three-course meal for 12 (prepared by them) at the school's annual auction. This year, my mom is in charge of cocktails. We decided that a French 77 would be a classy and simple choice for an aperitif, but my mom wanted to do a test run before the big night, just in case. Fine by me! 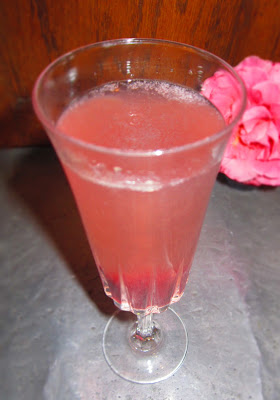 Lemon twists are the traditional garnish, but those things are way too much work (at least for me anyway), so I decided an amarena cherry would be a nice substitute. Yeah. Those things cost about $13 for a small jar. Not gonna happen. Instead, we grabbed a can of bing cherries. They ended up turning what should have been a champagne-colored drink pink, but we liked the hint of sweetness they added.

Anyway, these drinks are great for a celebratory occasion, especially when the weather is warmer. They're nice and light with the perfect combination of floral and fruity. 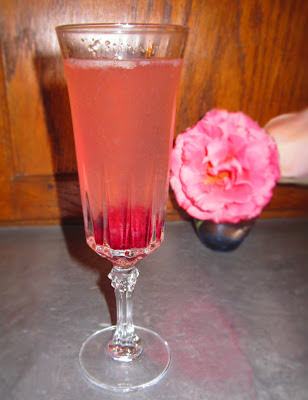 I first visited Casa de Cobre with the Dishcrawl team for our holiday dinner back in December. My family loves Mexican food, so when my mom mentioned that she thought it would be fun to try something new during my trip home for Easter, I thought it would be a great choice.

Casa de Cobre serves food from the Michoacan region of Mexico. It's definitely not a refried beans and mexican rice kind of place, but since my family is getting more and more adventurous with our dining, I thought they would appreciate a little something different.

We started off with an order of Chips & Salsa with Guacamole ($10). 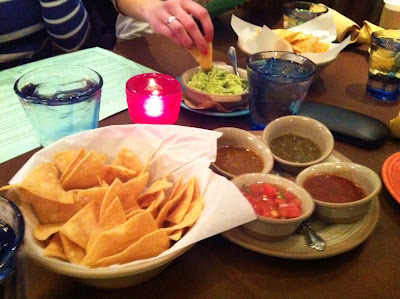 Also, margaritas. The kiddos had the House Margarita ($9) and my parents had The Purist ($11). I liked The Purist better but I'm not convinced it's worth $11. 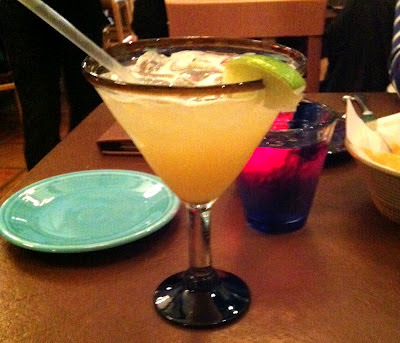 For dinner, my dad ordered the Carnitas ($17), slow cooked pork with beans, pickled jalapenos, carrots and onions, and flour tortillas. 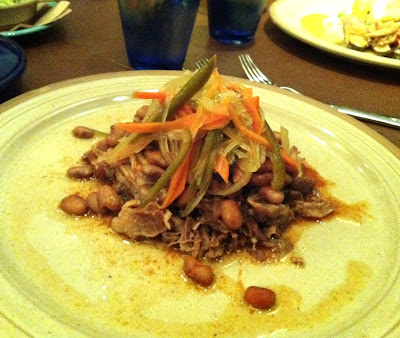 This was my favorite dish of the night. As my dad pointed out, the pork was very lean and well cooked and the pickled veggies complimented the pork well. I think my dad wished the flour tortillas were corn, but he only mentioned it once so I guess it wasn't that big of a deal (he is usually a huge proponent of corn over flour). 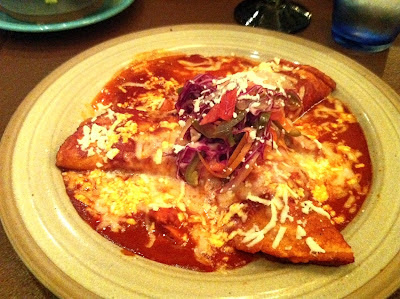 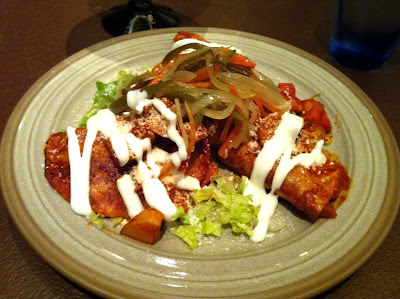 I'm not sure if my sister enjoyed hers (she likes rice and beans a lot and there were none to be found on her plate) and my mom thought hers was just okay. I agree that the red enchilada sauce was not that different from the kind you can buy in a can at the grocery store.

Chris ordered the fish special. He ate it all so I think he liked it. 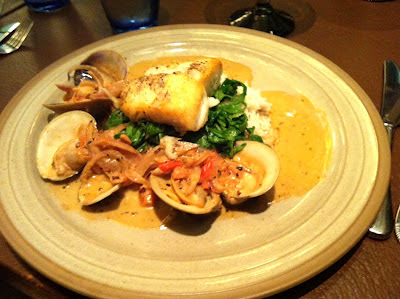 I had Chile Relleno de Puerco ($14), a breaded green pepper filled with pork and topped with roasted pecan crema. 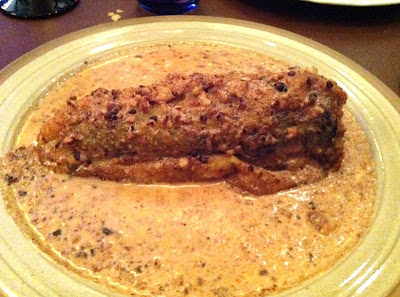 I tried this when our intern Chris ordered it during our Dishcrawl dinner and thought it was so good. I still thought it was tasty this time around, but I think I preferred having just a taste of it versus having it for my entire meal. It was just too rich.

My dad and I also wanted to try Nopales ($8), grilled cactus with cotija cheese and potatoes. 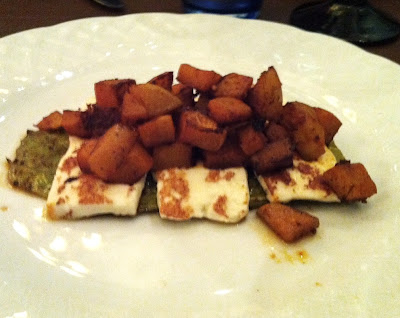 This was definitely unique. The cactus reminded me of green pepper, and the saltiness of the cojita cheese paired nicely with the potatoes.

All in all, it was fun to bring my family to a new place, but I'm not sure if they liked it enough to warrant a second visit. Oh well!
Posted by Katie @ Happy Hour Honeys at 9:41 PM 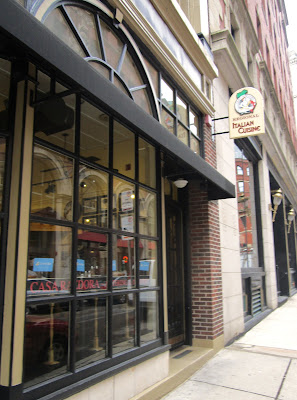 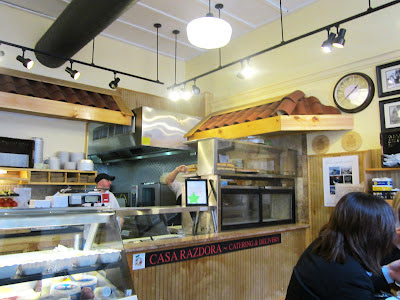 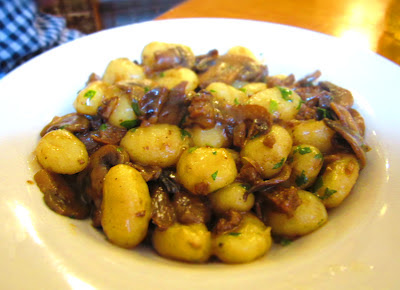 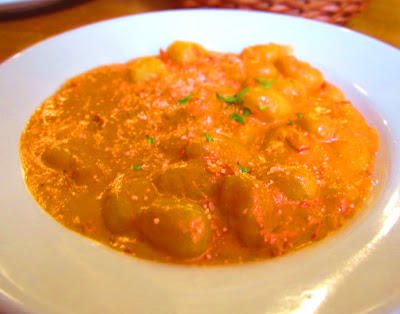 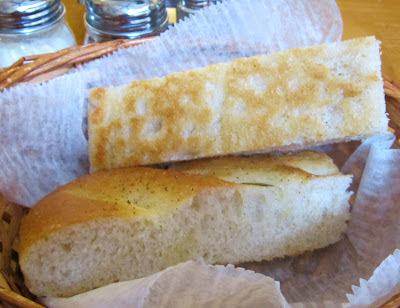