Miss Delta serves "Southern family favorites made from scratch" and, I have to say, they do it well.

Doug and I started off our happy hour visit with two of Miss Delta's specialty cocktails which are $1 off during happy hour (beers too). I had a Cucumber Kamikaze ($7) made with cucumber-infused vodka, orange liqueur, fresh lime and simple syrup. Such a pretty little glass and the drink was very refreshing. 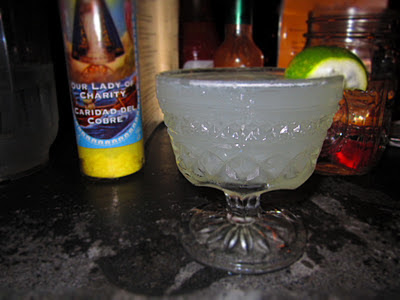 Doug had an Outlaw ($7) made with ginger-infused whiskey, fresh ginger, fresh lemonade, bitters and soda. Good flavor but the huge chunks of ginger floating around made it really hard to drink through the straw. 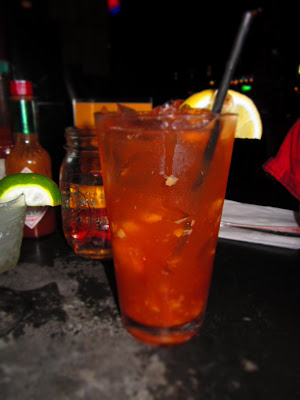 For food, we ordered Corn Fritters ($4) with green chili and black-eyed pea dip. These were delicious. The fritters were crispy on the outside and had whole kerns of corn in them and the black-eyed pea dip was creamy with the perfect amount of heat. And yes, I was eating the dip straight out of the bowl with a spoon. I would do it again too. 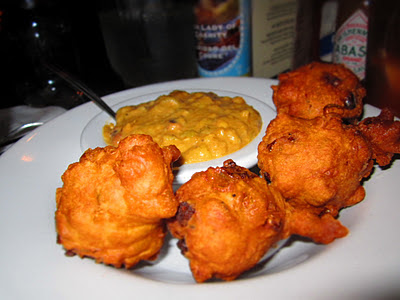 We also had Trashy Mac with Gumbo ($6.50). I'm usually a plain mac n cheese kinda gal, but I loved the addition of the gumbo- Miss Delta makes theirs with a roux, seafood broth, tomatoes, okra,
andouille sausage, shrimp, smoked chicken. Yum! (Except for the sausage... you know how I feel about andouille.) 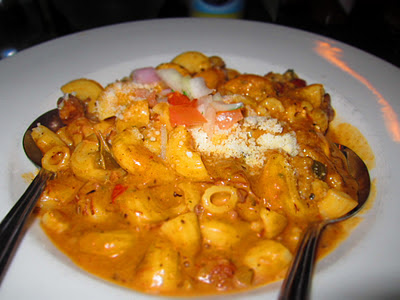 Hopefully we'll make it back to Miss Delta soon to try some more items off their happy hour menu since the Pulled Pork Tacos ($6.50) and Chicken & Waffles ($7.50) sound mighty good as well. Brunch is supposed to be pretty tasty too. 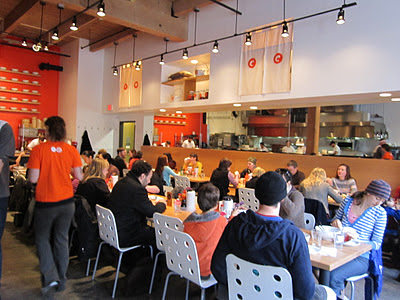 Katie and I were introduced to Boke Bowl over the summer at a World Forestry Center fundraiser. Their food was awesome and we have been anxious for them to find a permanent location. Having heard nothing but rave reviews about Boke Bowl's recently opened restaurant on SE Water Ave, and getting a tweet from Boke Bowl saying "bring it ladies" it was definitely time to hit up this hot spot. 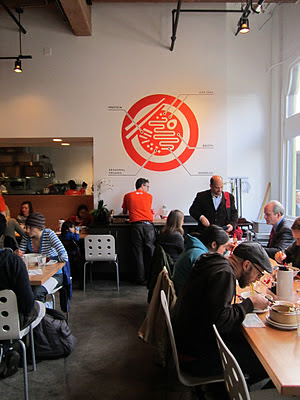 We know this is the darling of the Portland food scene right now and we know we might upset some people by saying this... but we weren't so impressed. Now, before you go getting all defensive, let us explain why: 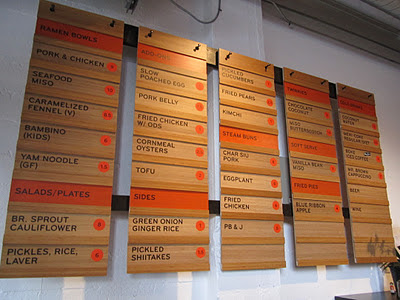 After placing our order at the counter, we found a spot by the kitchen and began our lunch with Pork Steam Buns ($6). The pork was tender, the buns were warm and soft, and the pickles, though kind of surprising, added a nice flavor. 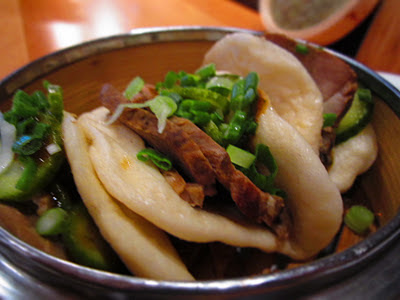 So no complaints there really. And $2 per bun seems pretty fair. Moving on.

Due to our convenient location, or the generosity of the chef, we were given some complimentary Fried Pears ($2.50) which were probably our favorite part of the meal. The sweetness of the pears, combined with the tart flavor of the vinegar was really delicious. 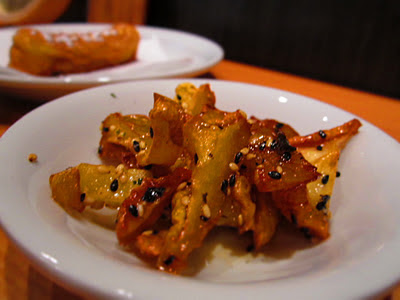 But then came the ramen. Katie chose the Pork and Chicken ($9), and so did I... I thought. But I was served the Seafood Miso ($10), which ended up being okay with me. Katie's meat-filled ramen was heartier, with a darker broth. The flavor was subtle and lacking the complexity we expected after the pork buns and the pears. A bit of a letdown for sure. 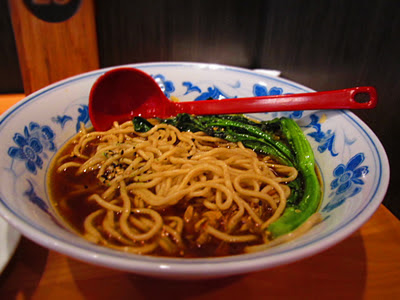 The seafood ramen, made with boiled shrimp, was lighter and we thought more flavorful. You might expect garnishes such as greens, braised bamboo or water chestnuts in a ramen, but we thought the butternut squash in these was a nice addition. 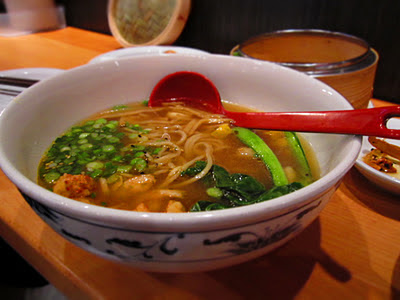 So what didn't we like about the place? Though our bowls were good, and despite the fact that Boke Bowl is competitively priced with other popular ramen places in town including Wafu, Biwa, and Mirakutei, we both felt slightly unsatisfied.

Perhaps we did it all wrong and we should have added some of the sauces on the table or Pork Belly ($1.50) or Buttermilk Fried Chicken ($3) off the menu, but then our bowls of ramen would have been $11 to $13, and that just seems sort of crazy for a bowl of soup (which, come on, is what ramen really is).

Or maybe we just played into the hype too much and set our expectations higher than they should have been. (But really, have you been on Twitter lately? @Bokebowl is blowing up.)

Or maybe we just aren't huge ramen fans to begin with.

Anyway, the point is, we probably won't be going back soon. Which means two more spots open at the lunch table for the rest of you. You're welcome...?

Oh, and we also decided to try one of Boke Bowl's Miso Butterscotch Twinkies ($1.5) for dessert, which we enjoyed because we liked that it wasn't overly sweet. But would we order it again? Probably not. 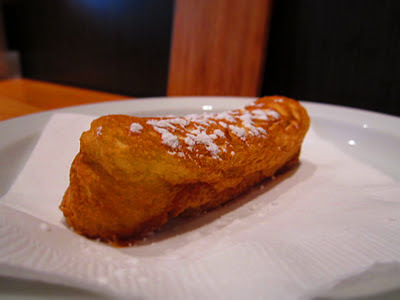 But hey, Boke Bowl also does a Korean Fried Chicken Night on Thursdays from 5 to 9:30pm so perhaps we should try that?
Posted by Kelly at 6:15 PM

After spending Christmas with the fam in San Jose, I flew up to Seattle to spend some time with Doug before we went  back to Portland. One night, we met up with his parents to go to happy hour at one of his Dad's favorite hh spots: Cactus, local chain that serves southwestern and Mexican cuisine.

We started off with $5 happy hour mojitos. Tasty, but definitely skimpy on the rum. I appreciate when restaurants offer cheap happy hour drinks, but if they're barely going to put any alcohol in them, what's the point? 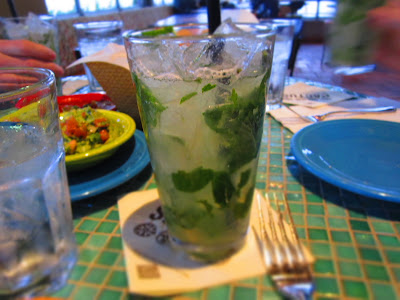 Doug's parents said the margaritas are much better. Noted! 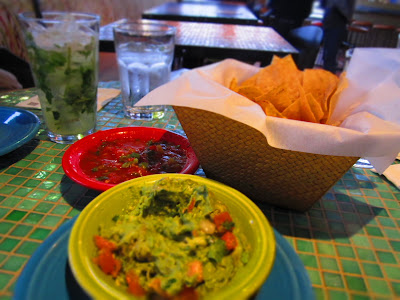 We also had the Smoked Chicken Quesadilla ($4) with bacon. For $4, this is definitely a good deal. Great flavor and pretty filling. 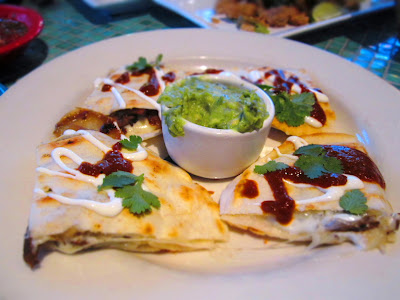 Doug's mom said the Blue Corn Calamari ($6) is a favorite of hers and I can see why. The blue corn coating added a nice crunch and the slightly spicy aioli was a great compliment to the calamari. 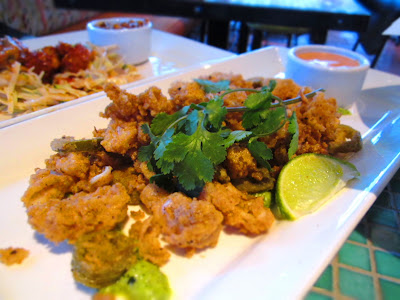 Doug's dad suggest that we order the Camarones D’ El Diablo ($6) which are prawns with spicy Diablo sauce and mango–pineapple mojo. Loved the spice on these combined with the sweet mango-pineapple sauce. 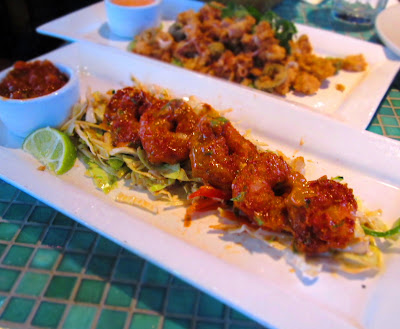 Great choice, Marilyn and Dick! I'll go to Cactus with you anytime!

My mom got really into The Next Iron Chef this year and she was a huge fan of Elizabeth Falkner. So when I suggested we go to San Francisco for the day when I was home, it was a given that we would be hitting up Citizen Cake.

But then Citizen Cake was closed. It might be closed permanently- it's kind of hard to tell.

And so, we needed a bakery replacement. Good thing I visited Miette last year with Gabs so I could take my mom and sis there instead. 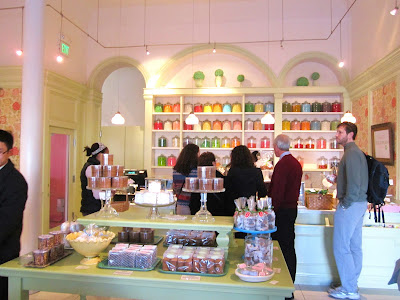 I'm kind of obsessed with this place. I mean, it's more of a candy shop that also serves cupcakes, macarons, and ice cream than a bakery, but just look at it. 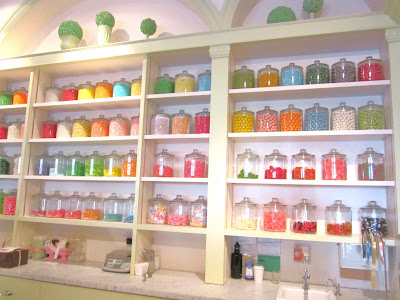 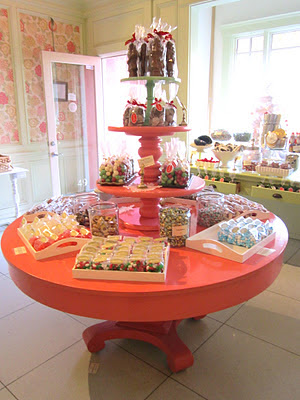 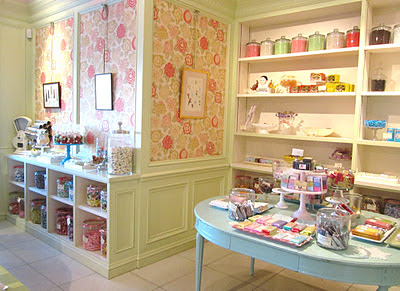 It's so cute inside it almost didn't matter if the cupcakes and macarons were actually any good... 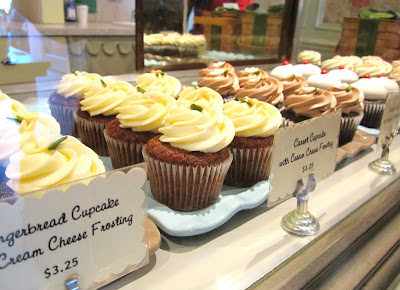 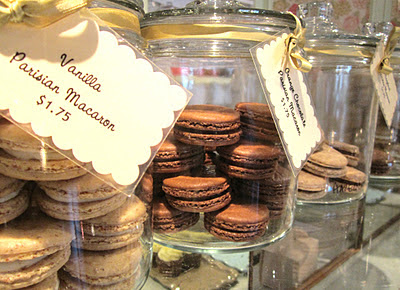 ... but they were. The cupcakes were certainly not the best I've ever had, but they were enjoyable and the macarons were flavorful and the correct consistency: slightest crunch on the outside of the cookie, chewy on the inside.

Would it be weird if I redecorated my apartment to look like Miette? Good, cuz I'm going to do it.
Posted by Katie @ Happy Hour Honeys at 11:23 AM

Right now I have a list of all the restaurants, bars, and happy hours I want to go to on my phone. And in a spreadsheet on my computer. And saved in a Google doc that Doug and I share. And on random pieces of paper around my apartment.

But so far I haven't been very good about actually making it to any of those places. So the obvious solution is to post an abridged version on the blog and give myself a two month deadline to make it to all of them (and blog about it.) So here goes:

I'll keep you updated on my progress...

For the last two years, Katie and I have made a Happy Hour Honeys calendar to give to friends and family for Christmas. The "2012 Calendar of Cocktails" features one drink recipe each month, giving people plenty of time to master the cocktail! The 12 recipes range from traditional drinks such as a hot toddy, to Happy Hour Honey signature cocktails. That's right, we created two drinks for this calendar! 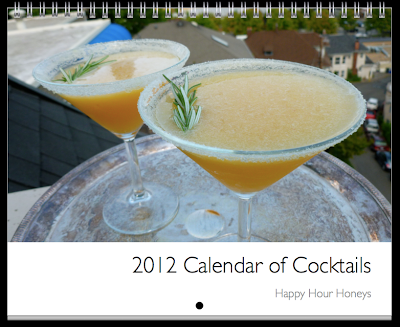 January's recipe is a current favorite, a French 75. Here's a peak at January and the recipe for the perfect cocktail to cheers with in the new year. 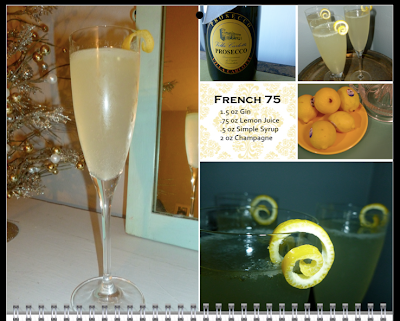 Shake the gin, lemon juice and simple syrup, pour into a champagne flute and top with champagne or prosecco.