Doug and I have three favorite sandwich spots in Portland: 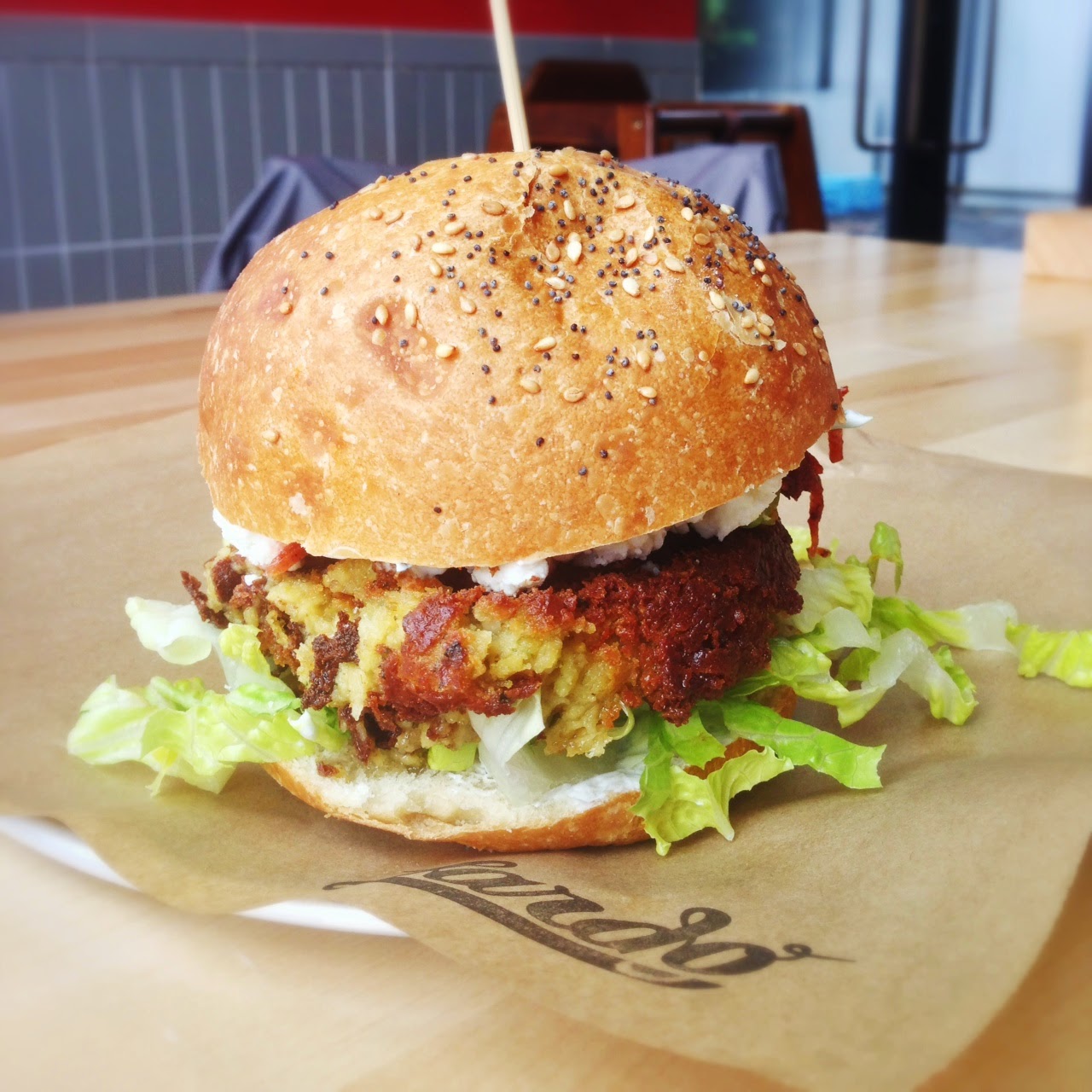 Everybody loves Lardo, but that's for a reason. I think there is nothing better than a huge Lardo sandwich after a big hike or long run- it's the perfect reward. I almost always get the chickpea burger but Doug loves trying out their chefwich specials. 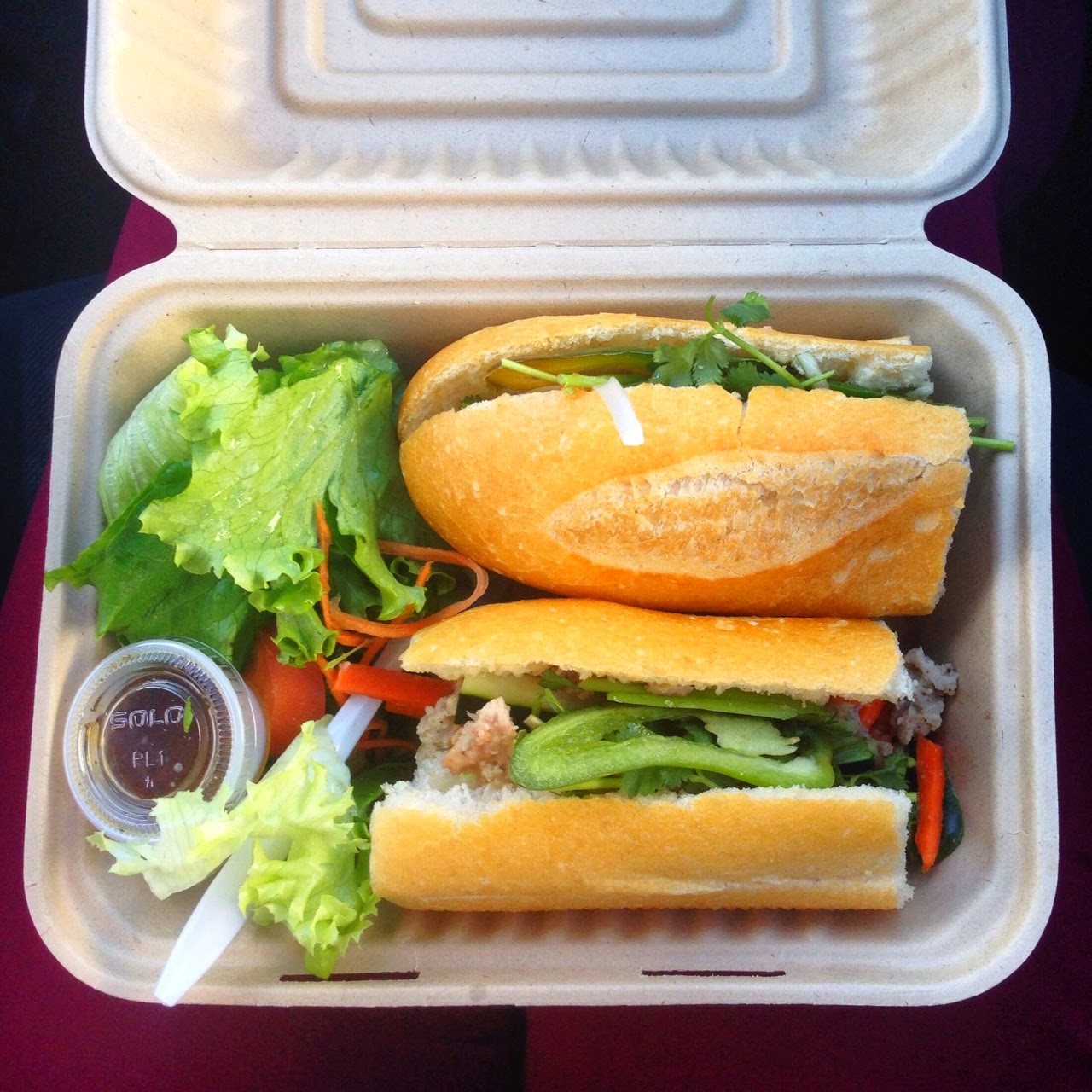 It's become tradition for Doug and me to pick up Lela's crazy delicious pork meatball banh mis for the road when we drive up to Seattle.They're usually gone by the time we hit the Washington border (there's usually a lot of traffic, okay?). 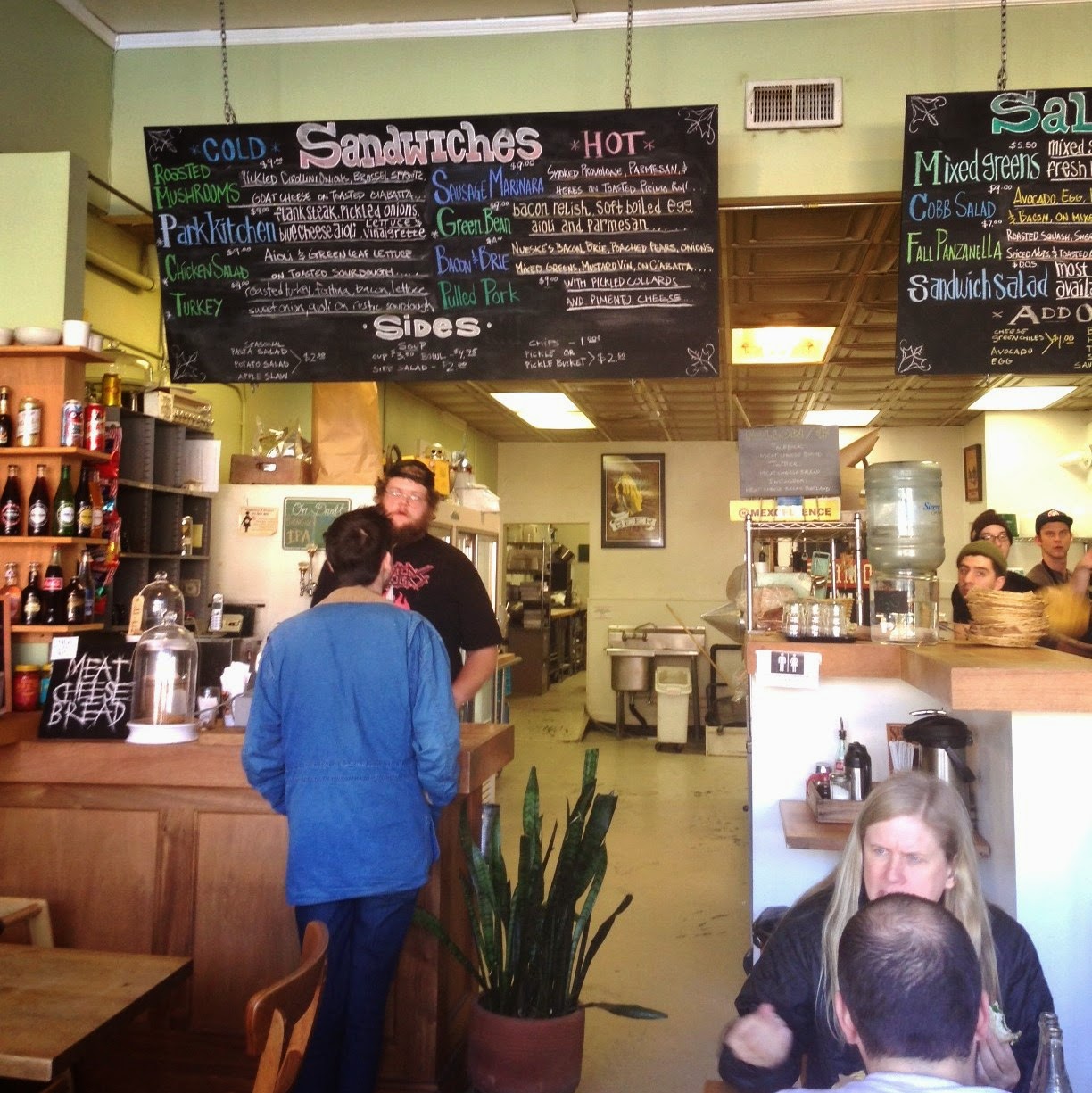 This is one of our go-to spots to grab lunch on those rare weekends when we can afford to have a nice, leisurely lunch. We like to sit outside if the weather's nice (like it was last weekend) or cozy up at the bar at Meat Cheese Bread's aptly named neighbor, Beer, if it's not. Let's talk more about MCB, shall we?

Meat Cheese Bread offers about a dozen sandwiches, some hot and some cold, as well as a few breakfast options, salads, and sides. If you want beer with your lunch (and why wouldn't you?), you can eat outside or have your sandwich delivered to Beer next door (Beer has tons of bottles and a really good but relatively small selection of local drafts).

My absolute favorite sandwich is the Green Bean ($9) made with grilled green beans, bacon relish, soft boiled egg, parmesan, and aioli. The combination might sound a little odd, but trust me, it's amazing. The sandwich is somehow rich but still light so while I always feel full after I eat it, it's not one of those "omg I need a nap immediately" kinds of full. 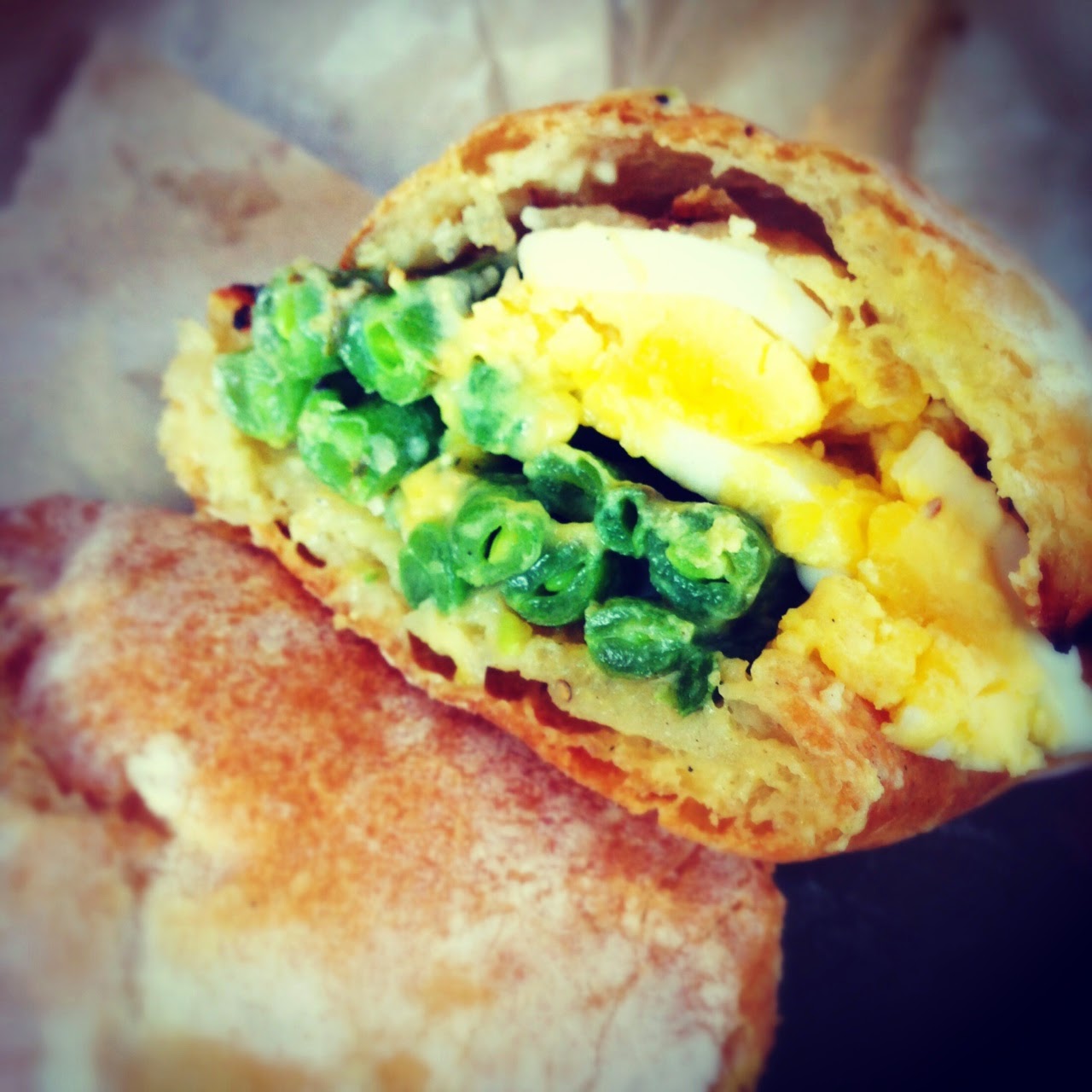 Doug's top pick is usually the Park Kitchen ($9) made with flank steak, pickled onions, blue cheese mayo, lettuce, and vinaigrette. If you love the combo of steak and blue cheese, this one's for you.

At our most recent visit, we branched out a bit and tried some new sandwiches. Doug made the better choice with the Bacon and Brie ($10) made with bacon, pickled poached pears, brie, farm greens, and mustard vinaigrette. Much like my beloved Green Bean, this sandwich did a great job of balancing rich (bacon and brie) with light (pears and farm greens). 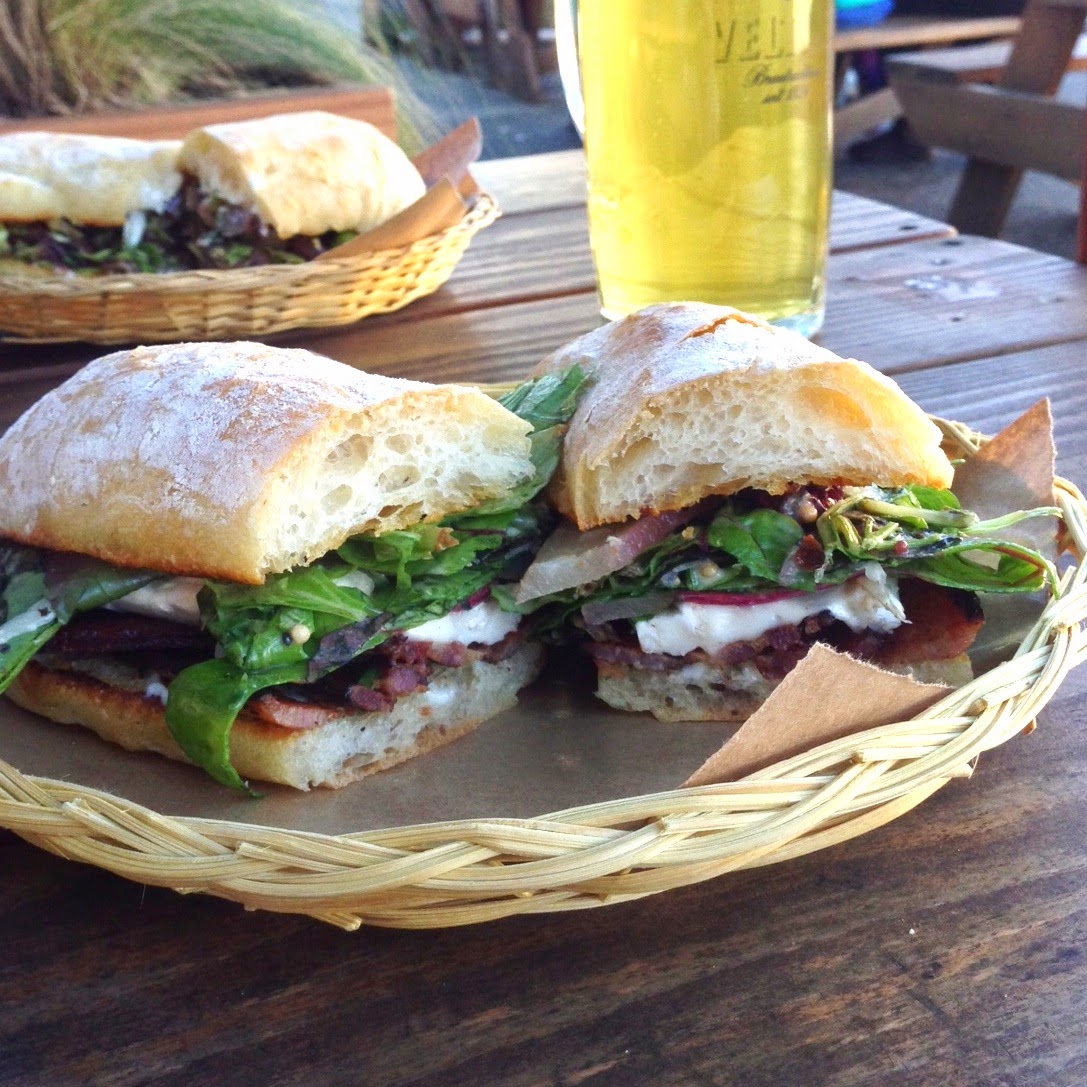 My selection was actually pretty disappointing. I went with the Roasted Mushrooms ($9) made with roasted mushrooms, pickled cipollini onion, brussels sprouts, and goat cheese on ciabatta. I think the downfall was that I didn't pay attention to how the menu was set up (cold sandwiches on the left!) and imagined a warm sandwich. The cold mushrooms just didn't do it for me and I didn't get much brussels sprouts going on either. Definitely will be sticking to the green bean sandwich from now on! 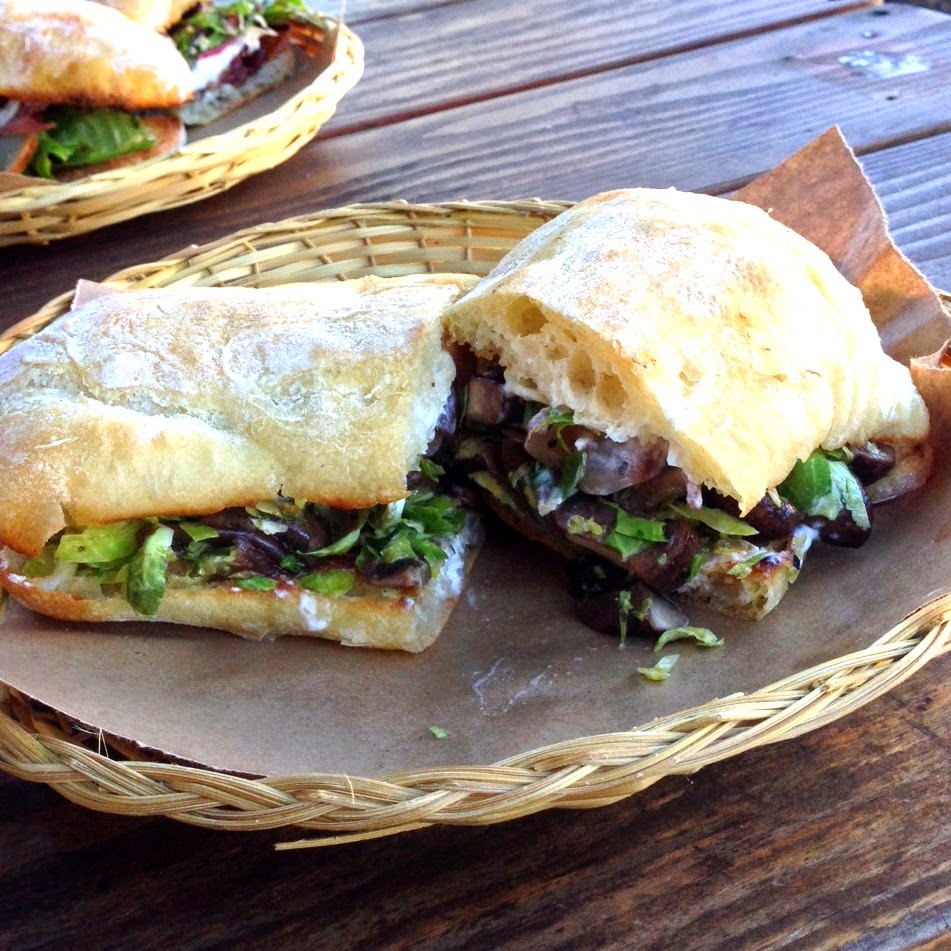 When Kelly and I first tried Boke Bowl East about three years ago, Boke Bowl was the hot new spot in town. It was only open for lunch and it was PACKED. Kel and I went in with high expectations and when those weren't exactly met, we just never went back.

Now, a few years later, Boke Bowl has a second location on the westside and after a few months of driving by it everyday on my way home from work, I realized that I really wanted to give Boke Bowl another shot.

Kel and Adam visited the westside location first, both opting for the Pork Dashi ($10) ramen and though they thought the noodles, veggies, and meat were all good independently, the overall dish was a bit too rich and didn't quite hit the spot for them.

Our first joint HHH meal at Boke Bowl West came after a rock climbing session with Adam and Doug. We ended up arriving just in time for their Dim Sum brunch, which is served on Saturdays and Sundays from 11am-3pm. 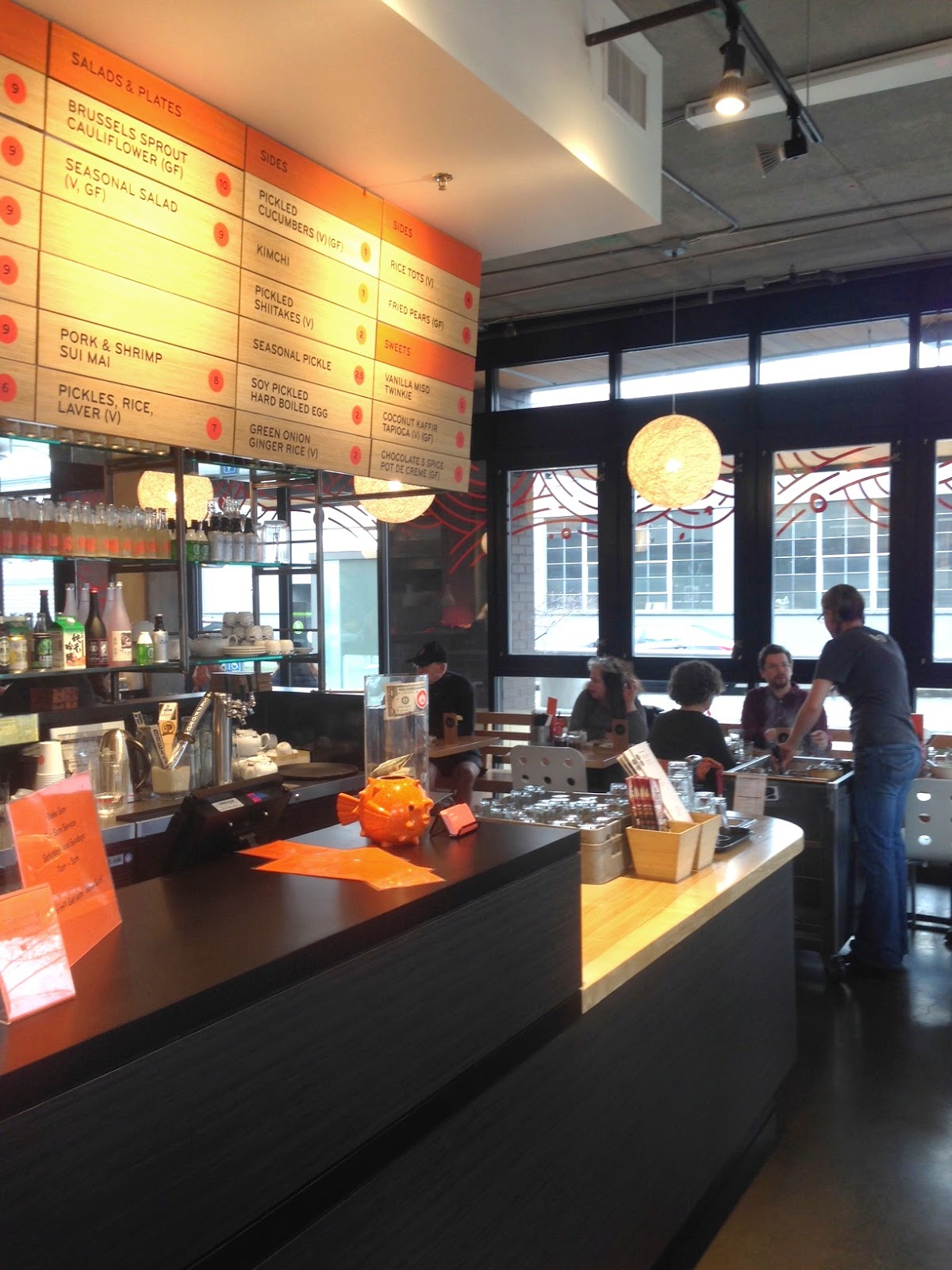 Boke Bowl says "this is our non-faithful recreation of the Cantonese-style, tapas-like, small-plate/pushed cart service offered at more traditional Chinese restaurants." I've never had dim sum, so I don't have much to compare it to, but it is a fun concept.

After you're seated, servers come around with a few different carts. They share their offerings with you, all of which range from $3.75 to $5.75, and you can opt in or wait for other plates to come around. 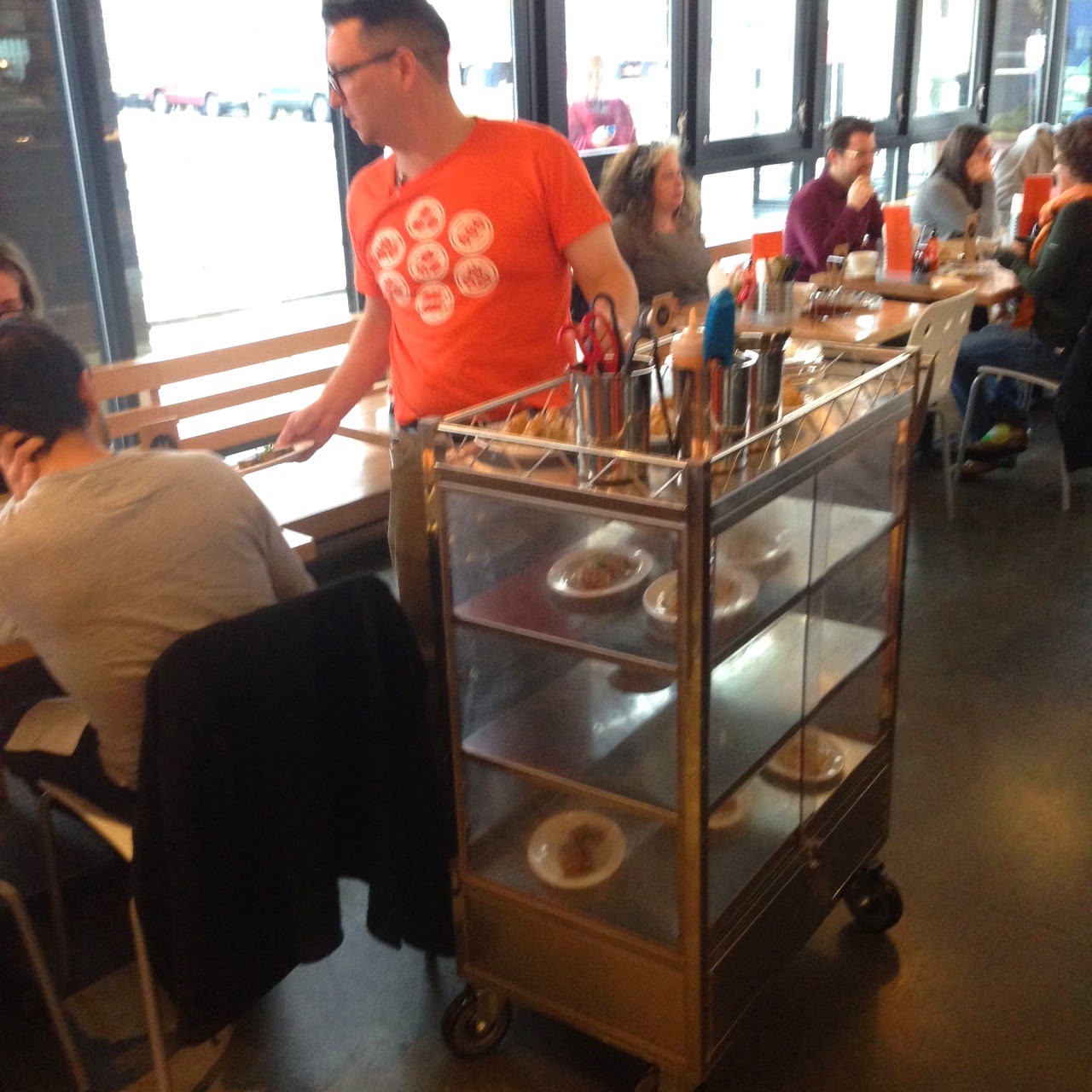 We tried a few different plates including Potstickers, Spicy Wings, Baos, and Sui Mai (dumplings), but our favorites were the Chinese Greens with Oyster Sauce and a special crawfish and spicy pork stew with rice. 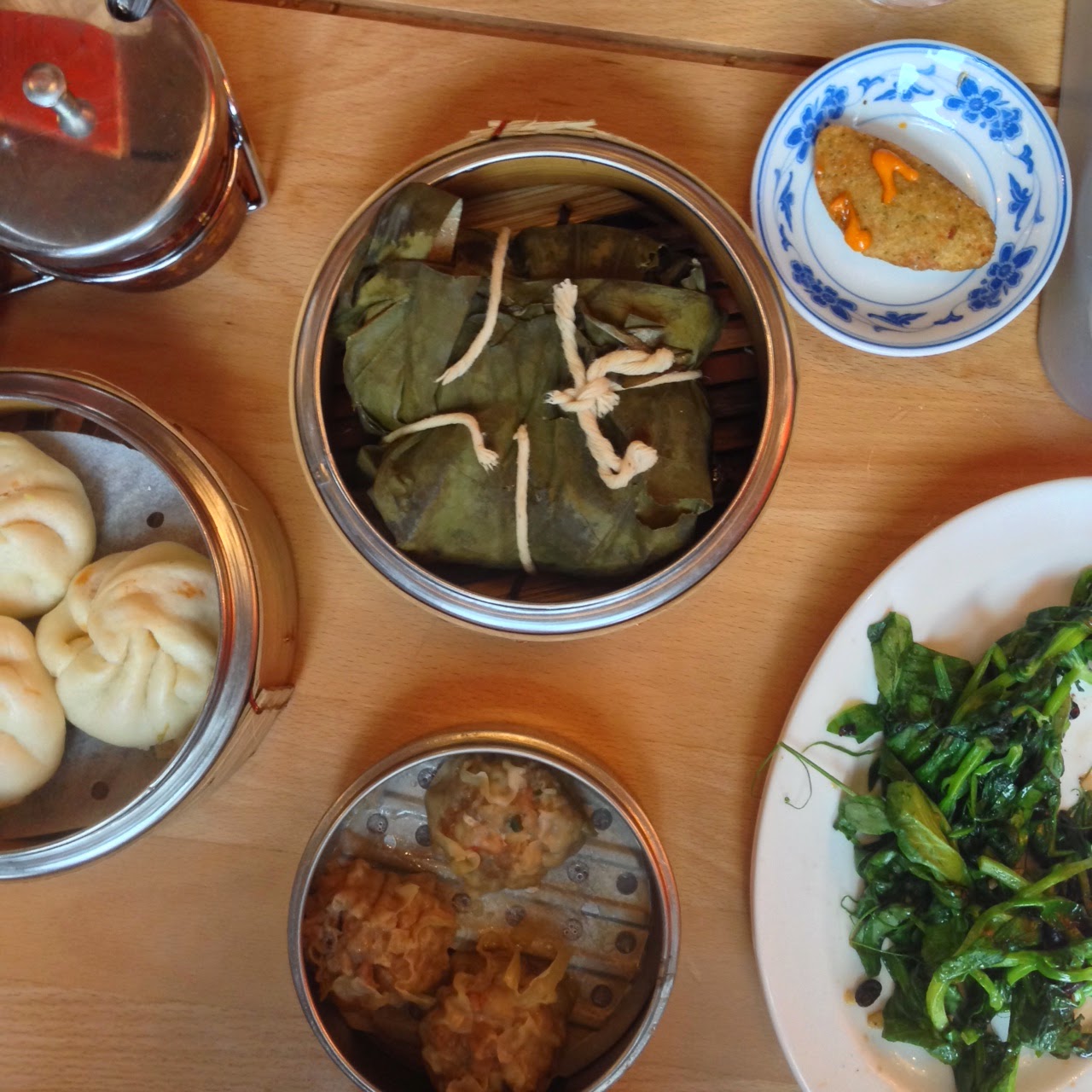 Everything was good, but even with the plates we liked best, we were all left with the same feeling Kel and I had after our first Boke experience: one of slight disappointment. Like, why aren't we more excited about this? Why does it feel so overpriced? It certainly wasn't bad... we just wanted more from the experience.

Still, I wanted to give Boke one more chance so when my friend Kendall wanted to meet up for lunch in NW, I suggested we grab food there.

The server at the front counter was very friendly on this visit. He told us the warm Brussels Sprout Salad ($10) with cauliflower, citrus slices, tofu croutons, and Thai vinaigrette was his favorite item on the menu, so we decided to split that as well as an order of three different steam buns ($9). 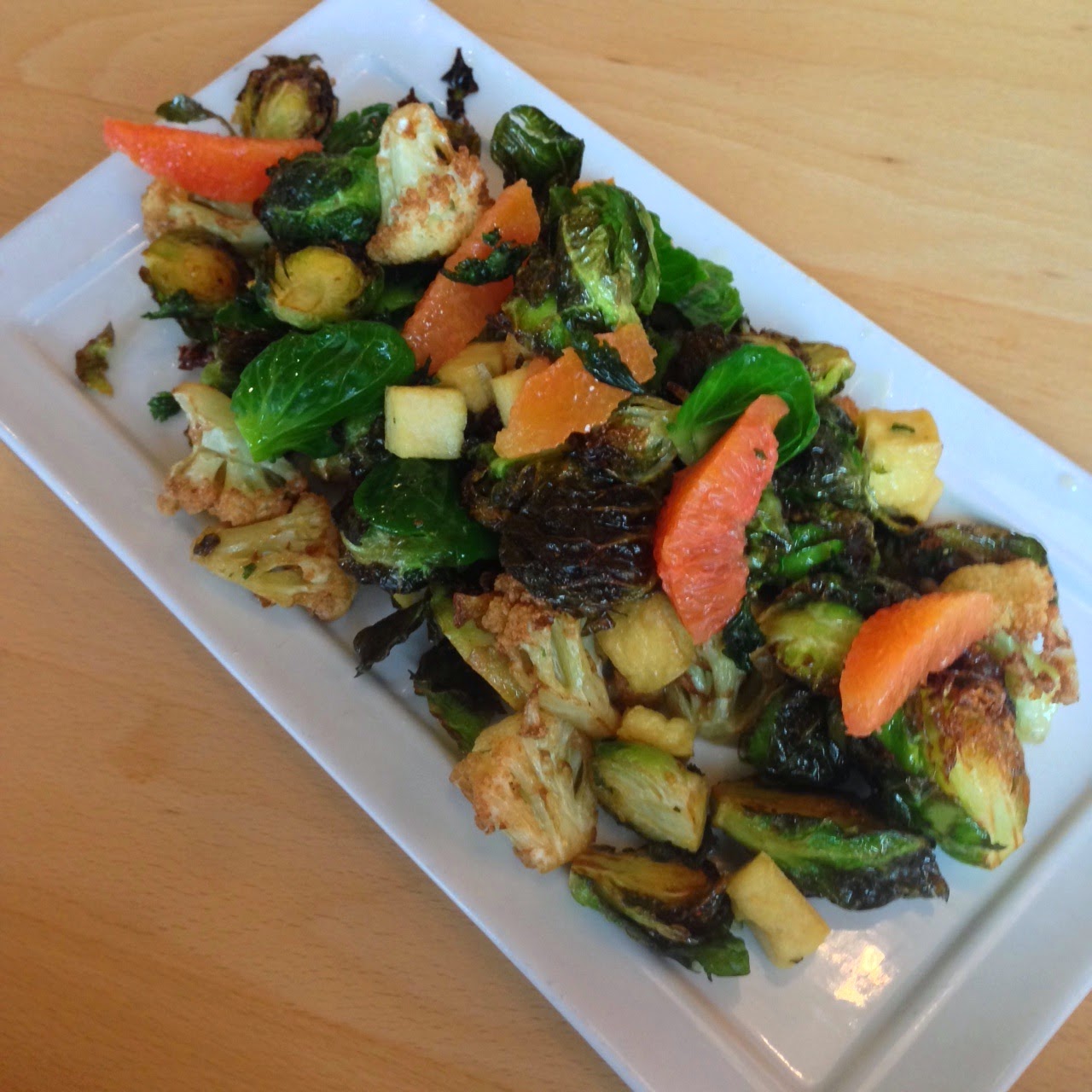 The server knew what he was talking about. That salad was my favorite thing I've eaten at Boke Bowl- east and west. The combination of perfectly cooked Brussels sprouts and cauliflower with bright touches of citrus and savory bits of tofu croutons was just delicious. If I go back, I'll definitely order that.

Our Brisket, Miso Mushroom, and Fried Chicken buns were reasonably tasty too, but that salad was hard to top. 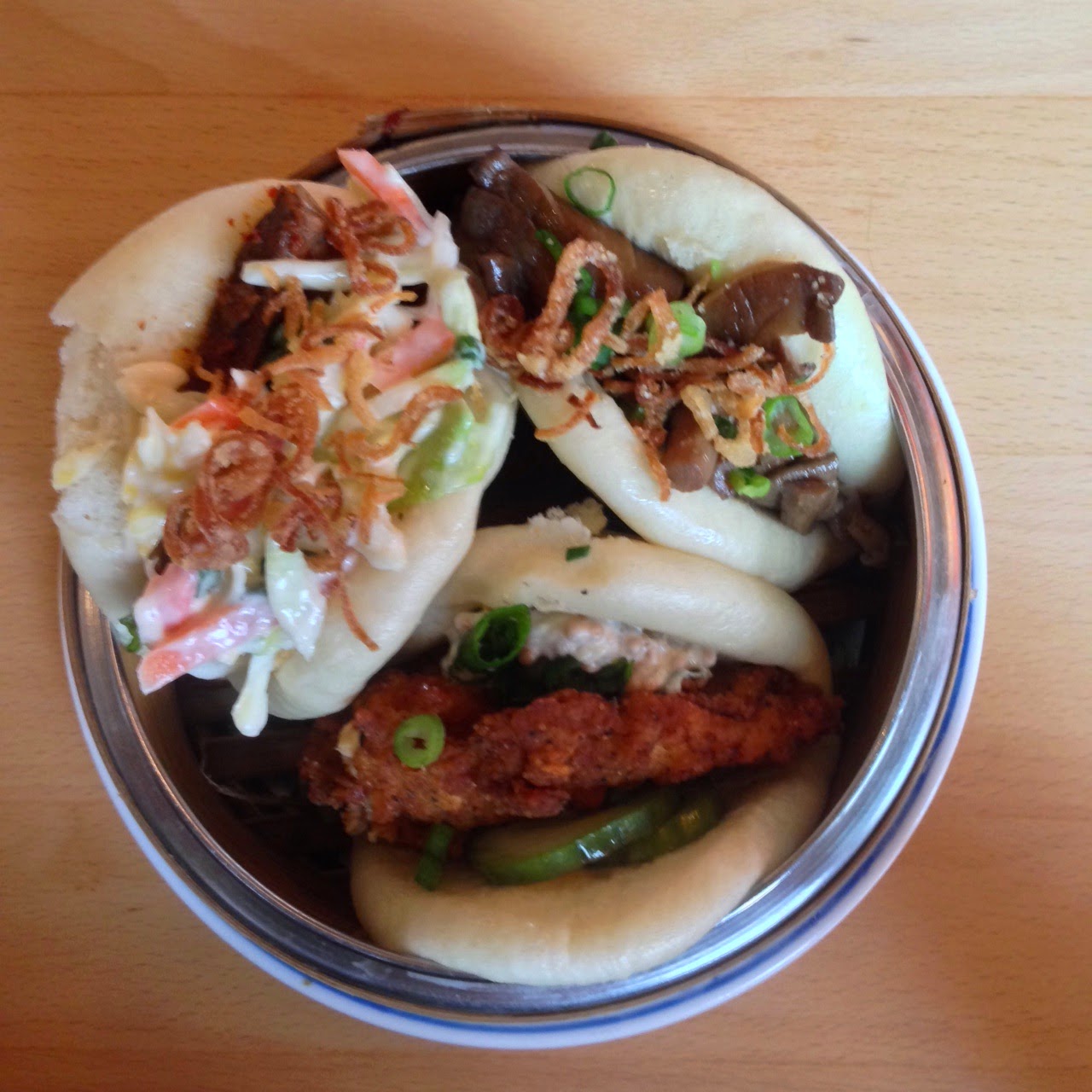 So, after each giving Boke Bowl two more chances each, how do Kel and I feel now? Pretty indifferent, I think. I would go back for the Brussels sprouts and... that might be about it. Guess Boke just isn't for us.
Posted by Katie @ Happy Hour Honeys at 10:37 AM

It's no secret that Katie and I love cheese, so even though we sometimes make attempts to be healthy or cook to save money, we're not about to give up our girls nights completely- especially when there's cheese to be had. Cheese & Crack was at the top of our list once we decided to treat ourselves and believe me, it didn't take long.

The small, simple snack shop is just down the street from Paadee, one of my other SE 28th favorites, and seats about 20. You order at the counter and after a glance at the menu, we realized it would be best to get some thoughts from the experts.

Per our server's recommendation, we went for the kitchen favorite of La Maripos "Chubut" & Cana De Oveja ($10) with honey glazed peaches and two glasses of the House Rose ($6).

So cute and the best part, so affordable- which means we can return (often)!

After finishing off our cheese plate, we weren't still starving, but we weren't ready to call it a night either. Since we were already there and we love ourselves some mac, we also ordered the Macaroni & Mornay ($8) made of trofie pasta with a side green salad. We're always planning a "Best Mac in Portland" post (wait for it), so this seemed like a necessary choice.

The pasta was really unique with a texture more like spatzle or dumplings versus a traditional noodle, and though initially the portion seemed small, it was rich and garlicky and probably just the right amount.

The house white was the recommended pair to this pasta, but we mostly drink red and so we went for the House Red ($5) instead.

It's awesome to have a place to get snack-style food for a reasonable price. And bonus: they have a happy hour from 4-6pm and the last hour before closing! With the purchase of a beverage, you can get any of these delicious snacks for between $3 and $5: Mini Snack Cheese Plate, Nachos, Mornay Fondue, Macaroni & Mornay, Sandwich. Yeah, we're definitely going to have to hit that up.

The limoncello is delicious when drank straight, but we also wanted to fancy it up a bit by using it in a cocktail. 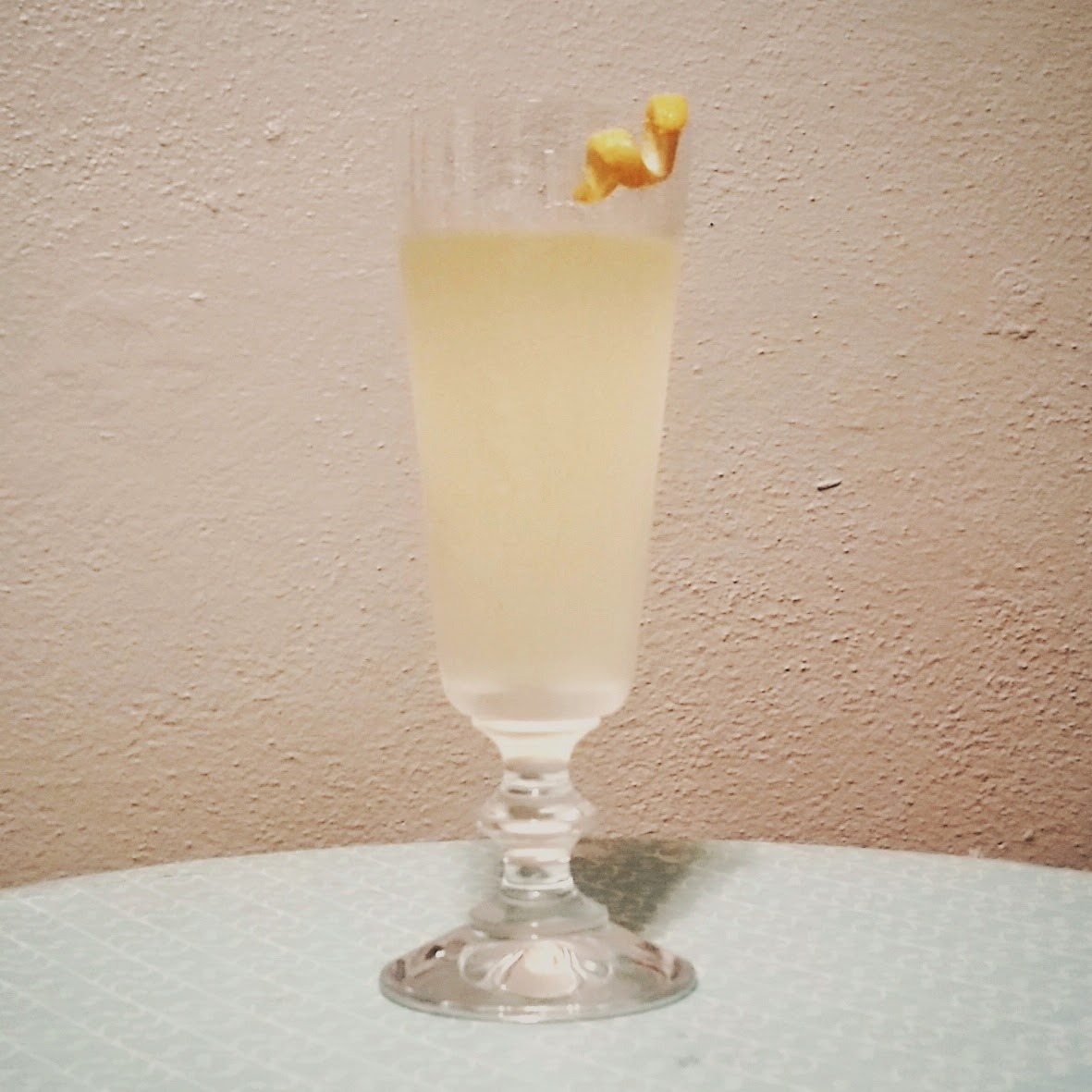 We started off using Imbibe's recipe which called for limoncello, Cointreau (or triple sec if you're cheap like us), and sparkling wine. However, we eventually ended up omitting the triple sec since the drink was plenty sweet (and alcoholic) without it. 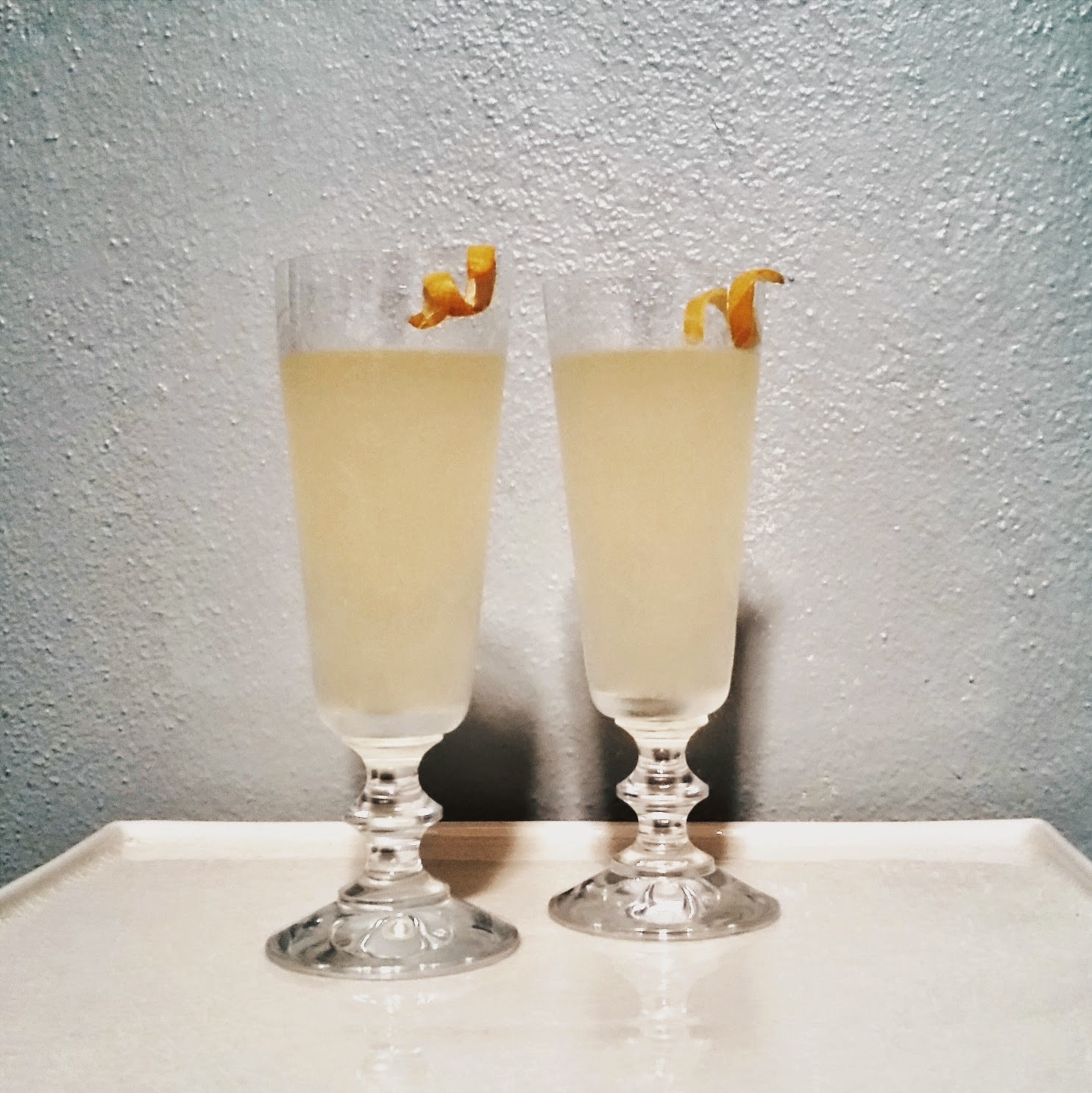