Last week was just one of those weeks. But we all know that fortunately there is a cure for such things and that is drinks and dessert at a classy restaurant.

Katie H. mentioned a few weeks ago that she had really good sangria at a place just up the road from her at Washington Square (yep, Boston has one of those too. Not a mall though.) While I may not be the best at remembering certain details (I think my roommate will kill me if she has to remind me one more time that she spent 1st semester sophomore year in Australia), any mention of good drinks goes on memory lockdown. The original plan had been to get drinks with a few people at Sunset Bar & Grill but when that fell through, a good sangria place sounded like the perfect substitute.

The Fireplace is a cozy little restaurant which, as you might have guessed, features a big fireplace that is right next to the bar. Katie and I also appreciated the big drapes around the door that keep the draft out, just like the ones at Mint (what I wouldn’t give for a Bella and bowl of sweet potato fries…).

Once we finally got a seat on the bar (more on that later), we decided to each get a drink and a dessert. Katie’s my kind of girl, no wimpy sharing one dessert for the two of us. Love it.

To drink, Katie ordered the Mulled Wine ($9) which was served hot in wine glass with a cinnamon stick. I went for the Honeyed Capirinha ($9) with Leblond Cachaca (Brazilian rum), raw local honey, and freshly muddled limes. Katie’s wine was delicious and the warmth and spice of the drink made it a perfect choice for a chilly night. My drink was good too, but definitely more of a refreshing summer drink. Going with the mulled wine (or sangria) next time for sure. 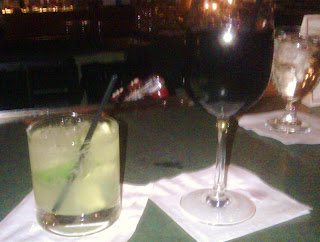 All of the desserts on the menu looked good, but we agreed to try the more seasonal choices to keep with the fall spirit. Katie ordered the Cranberry Pear Crisp ($8) with brown sugar oat crumble & cinnamon ice cream. We both liked it best when the ice cream got a little meltier and mixed with the fruit filling. I went with the Pumpkin Whoopie Pie ($8) with pumpkin seed brittle & pomegranate sauce. It actually came with two little whoopee pies and was absolutely scrumptious. The crunch of the pumpkin seed brittle was the perfect complement to the creamy filling and luxurious pumpkin cake. 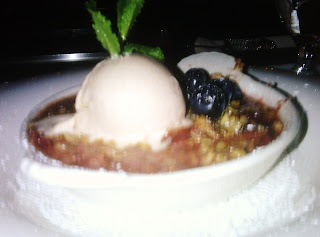 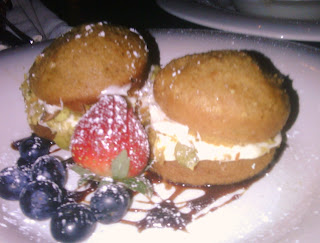 The only downside of The Fireplace was the iffy service. Katie and I arrived around 10pm, but were told by the hostess that the tables were reserved for dinner service only. That’s understandable, but the restaurant was closing in an hour, there were multiple tables open and we were there for dessert, not just drinks. After standing by the door for a good 15 minutes, and awkwardly being approached by the hostess again because she did not recognize us from 5 minutes earlier…, the hostess finally decided she could seat us but we’d have to order our drinks ourselves from the bar. Luckily, by that point, a couple was leaving the bar so we had a place to sit. We also weren’t too sure about the bartender. I think we might have had a bit of a Kelly on our hands but maybe he had been having one of those weeks too so I’ll hold off on judgment for now…