posted by Katie
photos by Nico

The few times I’ve talked happy hour with people in Boston, Grendel’s Den in Cambridge always comes up as a recommendation. Last week, for some reason, my Wednesday night class was switched to Tuesday night, so Katie H., Nico and I took advantage of the situation and headed out for Grendel’s 9-11:30pm late night happy hour. 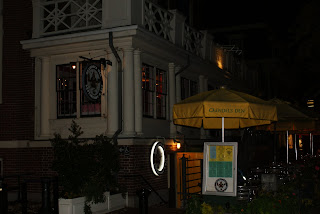 As per the law, there are no discounted drinks at Grendel’s but all the food is half-off. That’s right, ALL the food. We’re not talkin some whimpy little appetizer menu, we’re talkin the whole thing.

Grendel’s menu includes soups, salads, sandwiches, heartier entrees and, of course, the obligatory appetizer menu. Katie H. had already eaten but Nico and I were hungry so he went for the California Burger with jack cheese and guacamole ($3.35) and I tried the Barley Risotto with butternut squash, arugula, rosemary, parmesan & feta cheese ($3.35). The risotto was a special and they took some liberties with it, adding peas (which I like) and mushrooms (which Nico took care of), but the peas at least were a welcome addition and the risotto itself was very creamy and delicious, pretty much the perfect fall dinner. 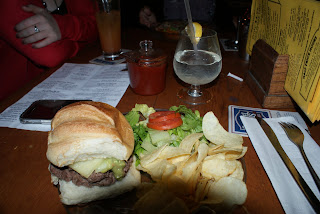 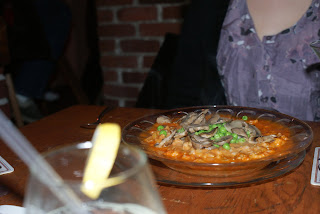 Since we were celebrating the fact that our class was over and done with earlier in the week than usual, we decided to have some drinks too. Katie H. went with a Hurricane ($5.50) and Nico ordered the French 47 ($6.50), which is named after a hard-hitting WWI artillery piece and consists of Beefeater Gin, lemon, simple syrup & a float of champagne. Fancy. I decided to go with the Cucumber Lime Vesper ($8) which seemed a little over-priced until it came with its own miniature shaker which allowed me to refill my martini glass two times after the waiter’s initial pour. Nice. 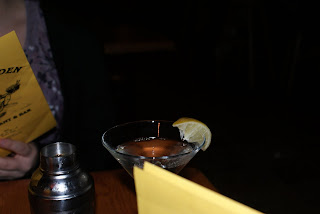 Around the time Nico and I were finishing up with our meals, Bryan joined us and he decided to try the spicy shrimp appetizer ($4), and really, they’re not kidding around when it comes to the kick those puppies have. Luckily, Bryan had his pitcher of Grendel’s delicious sangria ($10) to help cool things down. Never one to turn down the opportunity to try more food, I convinced everyone that we should get an appetizer for the rest of us too so Bryan wouldn’t feel alone eating his shrimp. We decided on the Spinach, Artichoke and Snow Crab Dip for ($3.50). Maybe I was fuller from the risotto than I thought, but the dip was way too rich for me. All cheese and not much spinach or artichoke (which I think is the best part). 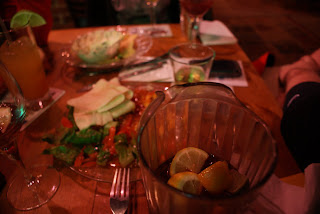 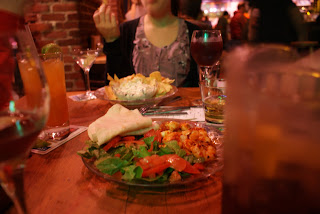 We all agreed we need to go back to Grendel’s soon not only for the cheap and (mostly) delicious food, but also for the laid back atmosphere, the novelty of being out and about in Cambridge and, in Nico's words, the "particularly enjoyable" sangria. Plus, after a good hour of running around the Harvard area looking for our bus, we finally figured out where to pick it up. Definitely a “know we’ll know for next time” experience…. 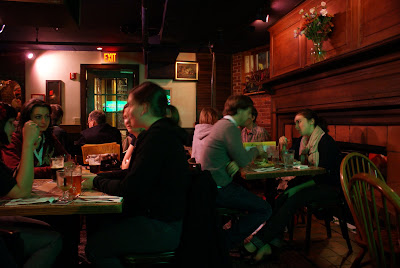 Grendel's Half-Price hours are from 5-7:30pm every evening and from 9-11:30 pm Sun-Thurs. You must purchase a minimum of $3 per person to qualify for half price food. And be sure to get there earlier rather than later; the bar is small and tends to fill up quickly when there's half-price food going on.

The sign outside of Grendel's says "Est. 1271". They explain on their site that "people frequently wonder why this seemingly impossible date is posted. The truth is that we were established in 1971, and there was an error in printing. We decided to run with it, since the medieval date actually evokes the period during which "Beowulf" was written, the classic of early modern English literature from which our name was taken. Beowulf is a hero who slays an ogre named Grendel, who terrorized a great mead hall. We figured, Grendel may have been an hideous ogre, but he knew a good mead hall when he saw one."