I'm a little embarrassed to report that I've been in Boston for a good 2 months now and still have yet to go to a happy hour here. I did, however, meet some friends for drinks and appetizers at a newly opened restaurant on Friday and so even though it wasn't technically a happy hour, there were food and drinks involved so I'm going with it. 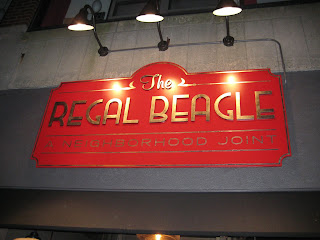 The Regal Beagle opened last Tuesday and is a welcome addition to Coolidge Corner as the bar scene previously consisted of the Coolidge Corner Clubhouse and...well, that was about it. I didn't catch the reference on my own, but if you are for some reason a Three's Company buff, you might recognize the name as the gang's favorite hangout. Yes, that is where owners Chris Tocchio and Kristian Deyesso (who also own Church in the Fenway) got the name, but other than that, the restaurant has no connection to the show.

The Beagle, with its red damask walls and low lighting, might feel a little fussy when you walk in, but the perky staff definitely lends the restaurant a more laid-back atmosphere than you would guess at first glance.

Katie H. and I arrived before everyone else so we decided to start off with cocktails ($9-$10) and the pumpkin hummus dip ($4). While the drinks were strong (always a plus), the other flavors in the cocktails were weak, which was a bit disappointing. I'm hoping that since we went so soon after the Beagle opened, the bartenders are still getting the hang of things. I thought the pumpkin hummus was bland as well. Strike two. 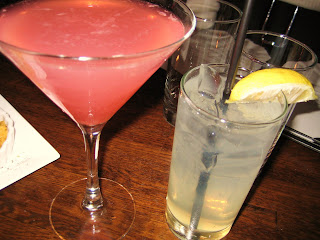 Not long after our drinks arrived, we were joined by the rest of our party. Sara and Tom went for cocktails while Bryan and Luke opted for beer (boring). 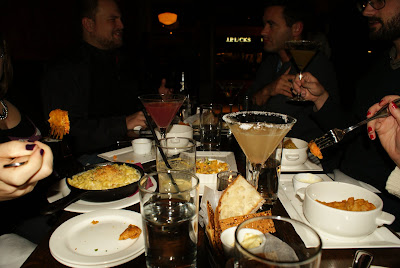 
We decided to stick to the appetizer menu for the most part as the entrees are a little pricey, especially for us grad students (we're talking in the $18-22 range). Sara, Tom, Katie and I all tried the tempura sweet potato fries ($5) which were much thicker than expected but were quite tasty. 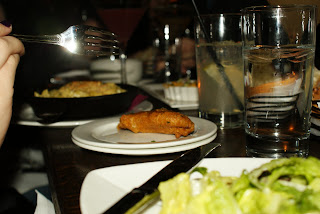 
Katie and I also split the mac n cheese ($12). It had a nice flavor to it but it was also one of those stringy types of mac n cheese while I prefer the creamy sort. Still good though. 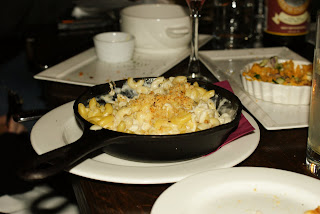 
Nico ordered the caesar salad ($7) which he pronounced "good" and Bryan and Luke chose the dates stuffed with gorgonzola cheese and wrapped in bacon ($4). The boys were pretty generous when it came to sharing the dates and I can see why. Those things are delicious but so rich that you really only want to have one. Definitely more of a "let's get it for the table" item. 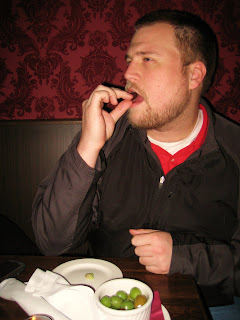 Oh yeah, there was some olive ($4) action going on too...
While most of the food was pretty good, I have to say I was a little disappointed with the Beagle. I think I was hoping that it would be my Boston version of Kelly's Elephants in Portland in that it would be a nearby go-to spot for ridiculously good appetizers and innovative and tasty drinks. In reality, however, it was the company I was with that made the night, not the food and drinks. Nonetheless, I am giving The Beagle the benefit of the doubt and plan to try it again in a couple of weeks to see if things have changed for the better after it's been open for awhile. Plus, there were some very tempting-looking desserts that we didn't get to, so I think that also warrants a second trip.
Posted by Kelly at 7:29 PM