This past Memorial Day weekend, Kelly, Adam, Doug, and I decided to take a trip to Vancouver, BC. Vancouver fit perfectly with our requirements for the weekend: within driving distance, somewhere most of us hadn't been before, and somewhere fun. The fact that we would technically be traveling internationally was a plus too. 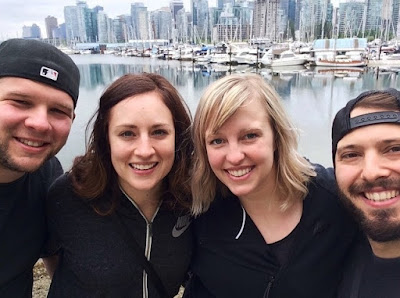 In this post, I'll cover the spots we visited in Chinatown (where we stayed) and in Mount Pleasant, and in our next post Kel will tell you all about our adventures in Gastown and Downtown.

Bestie was our absolute favorite spot in Vancouver. 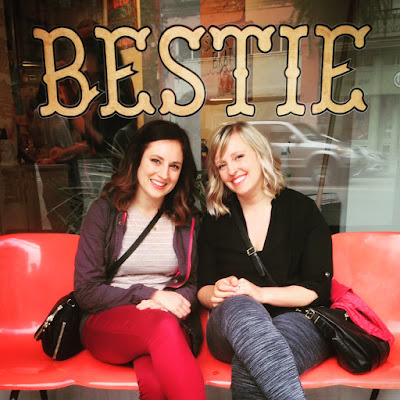 It's located in Chinatown, one of the most weirdly dichotomous neighborhoods I've ever visited. Vancouver's Chinatown is one of the largest in North America, but recently it's also become a hot spot for hipster-friendly restaurants and boutiques. That means that squeezed in among traditional Chinese bakeries and markets, you'll find stores specializing in designer footwear, specialty coffee roasters, and Bestie- a tiny, minimalist currywurst spot. 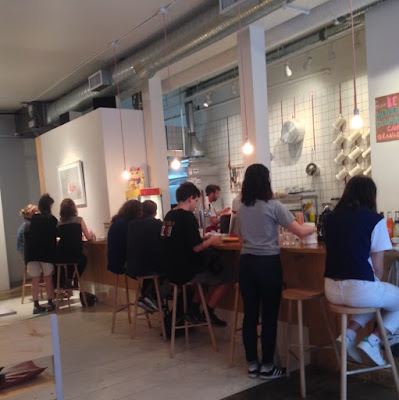 We started with the Pretzel Board which includes a warm pretzel, stinky cheese sauce, three different mustards and "pickled n' cured delights".

We also tried the Currywurst which is sausage and fries topped with curried ketchup, house mayo, and green onions. It was equally as delicious. 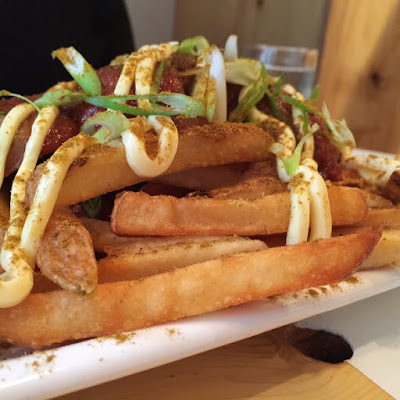 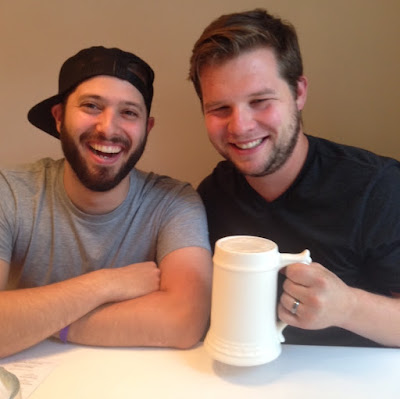 On the more traditional side of things, we grabbed some snacks in the form of steam buns at Chinatown's New Town Bakery. We each chose different kinds but they were all good, surprisingly filling, and very cheap compared to the rest of the food we had in Vancouver. Win-win!

We also had lots of fun on our Mount Pleasant Bar Crawl. We stopped at a bunch of places, but our favorites were 33 Acres Brewing Company, The Cascade Room, and El Camino's.

Since Doug served as our tour guide all weekend (thank you, Doug!), it was a no-brainer that we'd stop at at least one brewery. It was between Brassneck Brewery and 33 Acres and 33 Acres looked like it had a cooler design element to it, so that was our spot. 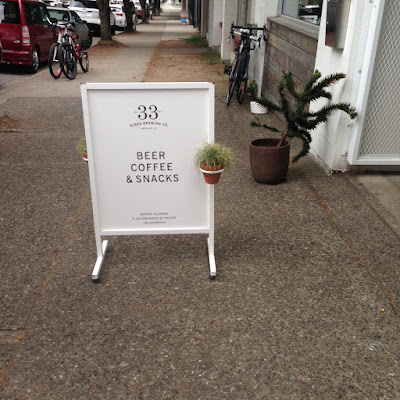 Much like Bestie, 33 Acres had the minimalist thing down pat. 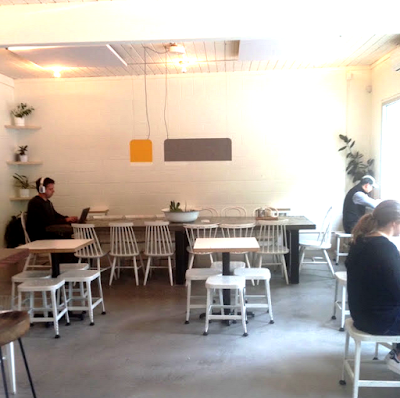 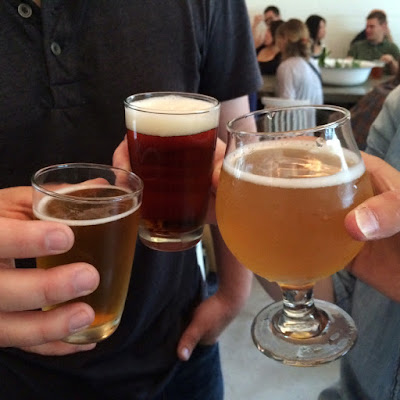 We ended up stopping back by 33 Acres the next morning for coffee for us and a six-pack to take home for Joe as thank you for watching Dexter. 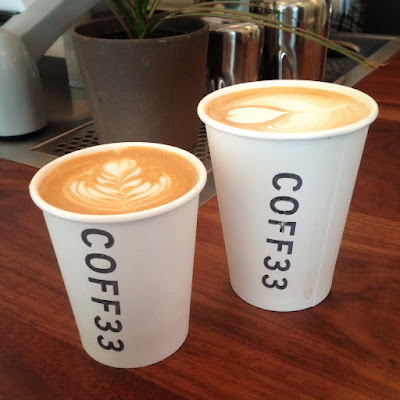 How pumped do you think they were when they figured out that the 33 thing not only works for B33R but for COFF33 too? My guess is pretty pumped.

Most of our little group didn't take advantage of this (can you guess who did?), but 33 Acres also serves snacks from a bunch of other well-known Vancouver spots including Earnest Ice Cream, Bestie, and Cartems Donuterie. (If you guessed Adam had a doughnut from Cartems, you win! It was delicious and I wish I got my own.)

We wondered into The Cascade Room right in time for happy hour- lucky us! But before we went full bore with a happy hour Pitcher of Sangria, we decided to get a little fancy and order off the bar's extensive classic cocktail menu.

Kel and I chose one of my favorite drinks, The Aviation, and Adam went with an Old Fashioned. 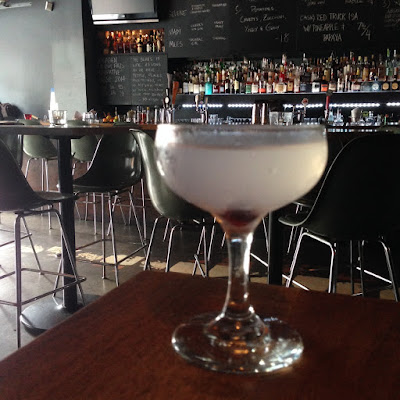 We also had some delicious Mac & Cheese made with three cheeses and the most amazing herb cashew crust (why hasn't anyone else thought of that!).

Before the rest of us could even sit down (what were we doing?), Doug made the very smart decision to take advantage of "Bocadillo Sunday" which includes a sandwich and pint of beer for $12 (a pretty good deal in pricey Vancouver). We all split Doug's Carne Guisada Bocadillo (sorry, Doug!) made with braised beef shortrib, caramelized onions, chimichurri, manchego cheese, and arugula. 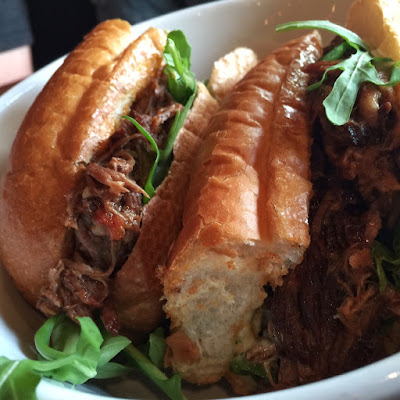 This was probably our second favorite dish of the trip after the Prezel Board at Bestie.

El Camino's also had some pretty good Margaritas and Mojitos. 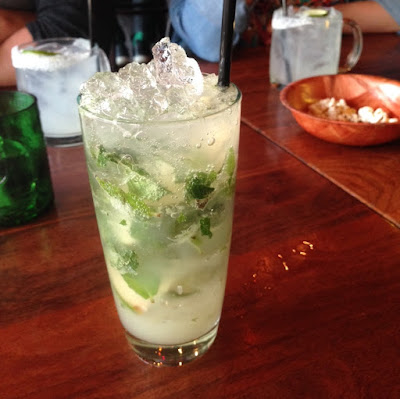 And turns out The Cascade Room and El Camino's are owned by the same restaurant group. No wonder we liked both so much!

One place to definitely skip on your own Mount Pleasant Bar Crawl: Portland Craft. We thought it would be funny to visit this Portland-themed bar, but really it was just super expensive with terrible service. If I wanted all that, I would have just stayed in Portland and gone to Lincoln!
Posted by Katie @ Happy Hour Honeys at 9:23 AM