So, surprise! Doug came back from Guatemala two weeks early!

To celebrate, we headed out to Cruzroom on NE Alberta (which, not coincidentally, is also one of the stops on my first Dishcrawl) for some happy hour tacos.

We started out with drinks. Cruzroom is big on infusions and during happy hour they're only $4.

I'm currently on a spicy-drink kick, so I opted for the "Deathstar" Ancho Chili-Apple Vodka mixed with ginger ale. 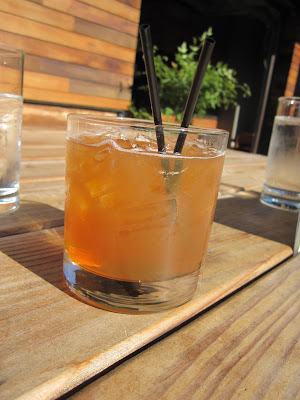 Bad call on my part. I guess I forgot that I don't like spirits flavored with apple. Also, ancho chilis are actually pretty mild so I didn't get that kick I was looking for either. And, if I did ever order this drink again, I wouldn't do it on a hot, summer day. It's much more suited for late autumn or winter.

Doug tried the "Colonel Potter" Double Fig Scotch mixed with 7UP. I was worried that 7 UP might be too sweet to pair with the fig scotch but it was actually pretty delicious. Good choice, Doug.

For food, we started with some Titos ($4): made-to-order tortilla chips tossed in asiago cheese and pico de gallo spice with a side of guajillo salsa and cheese sauce. 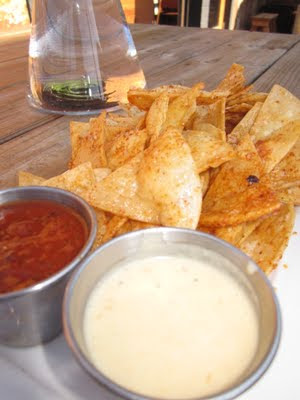 Loved that the chips were homemade and the combo of asiago cheese and pico de gallo spice was tasty and unique.

Happy hour tacos are only $2. I tried the Green Acres ($2) with roasted pork belly and apple-vinaigrette slaw topped with cotija cheese and the Broken Bean ($2) made with Halloumi cheese fried extra crispy and served over citrus black beans and topped with a roasted corn and chipotle salsa. 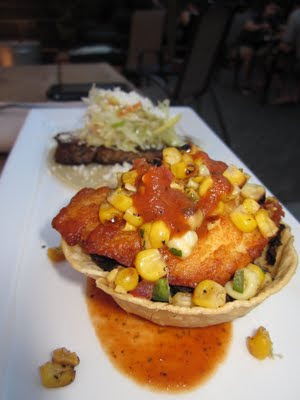 I love anything with pork belly so the Green Acres was the obvious favorite. However, the Broken Bean was also very tasty. I was surprised to find that they used the tortilla as a little bowl, but it worked. The crispy cheese was delicious and nicely complimented by the citrus-y black beans.

Doug ordered the Phuket ($2) with marinated Thai lemongrass chicken fried with a splash of coconut milk and topped with a peanut Asian slaw, the Green Meanie ($2) with slow braised pulled pork in a green tomatillo chili sauce topped with a roasted tomatillo poblano chili slaw and the Green Acres ($2). 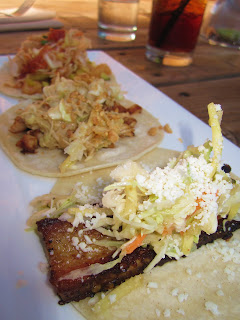 He liked the pork belly best ("it's one of the best tacos I've ever had") and liked the Thai one as well. The pulled pork taco was good too, but being the most traditional, it wasn't quite as exciting as the other tacos we tried.

Overall, Doug and I very much enjoyed the food at Cruzroom. As Doug was quick to point out (being an expert about these things), most of the tacos are not at all authentic... but they're still delicious. I'll definitely be back both with Dishcrawl and on my own.
Posted by Katie @ Happy Hour Honeys at 10:20 AM