As an early celebration for my Papa's 82nd birthday my parents took Mimi, Papa, Adam and I out for dinner at Dan & Louis Oyster Bar. After fighting downtown Portland traffic, parking, walking through, and consequently breathing in, some serious Portland Old Town garbage/street smells, and taking ibuprofen for my never ending headache, we arrived at our destination.

Dan & Louis Oyster Bar is an Old Town landmark that opened it's doors in 1907. Over 100 years later, it continues to be family owned by the fifth generation of the Wachsmuth family. With quite a reputation and over 100 years in the biz we expected something exceptional.

Dad, Papa, Mimi, Adam and I all started with Oysters On The Half Shell ($21.50 dozen). My mom is not a fan, but the rest of us were pleased with our Nisqually oysters. They are on the smaller end, but not as tiny as the kumamoto oysters I had during my previous visit. 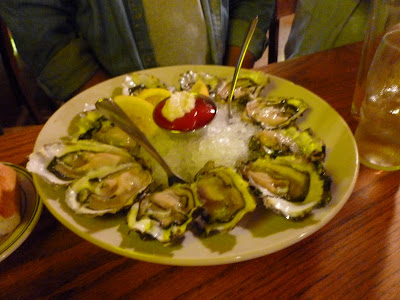 Oh, my Mom, Mimi and I also started with Lemon Drops ($7). Nothing compared to Perry's, but enjoyable. 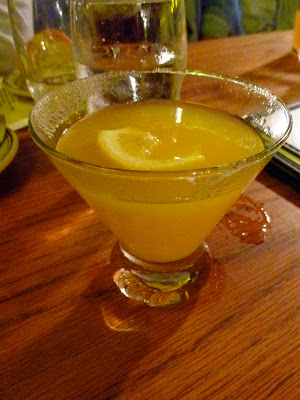 Adam ordered a bowl of the Clam Chowder ($7.50), which seems appropriate since it's his most recent food obsession (other than nightly sushi). Served with oyster crackers and bread, Adam's clam chowder hit the spot! 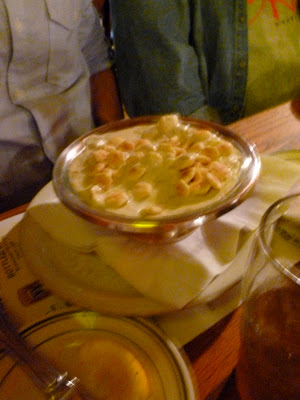 Papa, like Adam, wanted a sure favorite and ordered the Oyster Stew ($7.50 single portion). He had been looking forward to it since this is a stew you can't get just anywhere and he had no plans of making at home, but ultimately he felt the stew was "not bad, but not quite as good as I thought I remembered. Neither was the restaurant as a whole."

Overwhelmed by the menu my mom and I decided to each order different things and share. I went for a cup of the Clam Chowder ($4.50) and the Dungeness Crab Cakes ($15.50) off the appetizer menu, while my mom ordered the Calamari ($16.50) with asparagus and shrimp salad. The calamari was alright, but I don't think my mom or I felt like, for $16.50, it was the best plate of calamari we'd ever had. 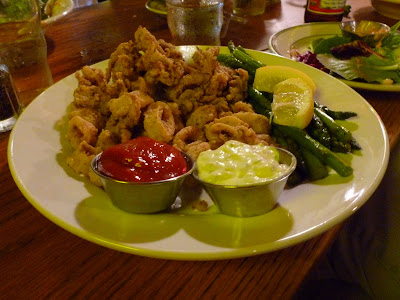 The clam chowder was hearty and delicious. The crab cakes were good, and by that I mean fried, but I tend to like chunks of crab meat so I feel like I'm getting some serious, real, crab. Also, they were in the most perfect round, smooth, balls. They seemed unreal and I can't help but wonder how they get them that perfect? 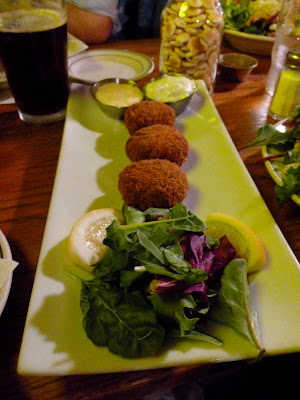 The shrimp salad came with the calamari and was really simple. Like the Dungeness Crab & Bay Shrimp Louis ($13.50 half, $22.50 full) that my dad and Mimi opted for, the mixed greens were of a bagged nature. The menu states that the salads are served with "Fresh Romaine," but they instead they were an overwhelming amount of mixed greens that overpowered the less than generous amount of crab. Unfortunately, not the best crab or shrimp louis' this group has had. 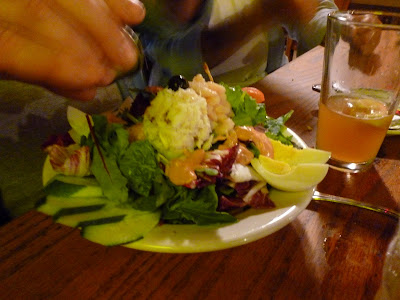 Here's the deal. The first thing Mimi and my dad said when they sat down was that this is the place their dad's each liked to come for a delicious specialty that they didn't get at home. So, the history is definitely there, but they need to step it up. There are so many restaurants in Portland that turn out great food at great prices and this isn't living up the expectations of people that used to go there. The consensus was that there is a feeling of nostalgia around Dan & Louis, but it just wasn't as good as everyone had hoped, or remembered.

Still, it could be worth checking out for a cup of chowder and oysters. Maybe hit up their HH Monday through Friday from 4-6pm.


HAPPY HOUR MENU
Oysters on the Half Shell
$15.95 Dozen