It is wonderful to have an ex-boss who is also a fabulous mentor and friend who agrees that a good hh as the best place to catch up, share ideas, and enjoy a few drinks. Since it is about time I featured a new happy hour, I chose somewhere new for Rachel and me that specializes in something we're both fans of. Wine. Vino Paradiso in the Pearl is a trendy wine bar owned by Pink Martini's vocalist and percussionist, Timothy Nishimoto. The atmosphere is casual and funky, creating a relaxing space to meet up with friends or go on a date. 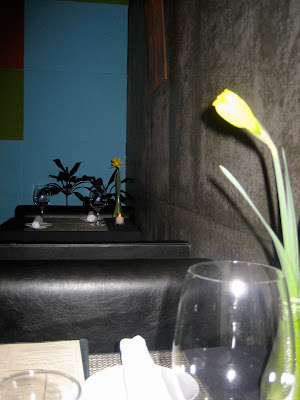 Since Rachel got stuck in traffic I was forced to make the happy hour food decisions and first wine order without her. I figured their staff knew more about the wine than I did so I went with a Cabernet Savignon suggested by the waiter. The happy hour food selection is limited and everything is $6, but I think fewer choices made the burden of having to make the selection easier for me.  I finally decided on the Artisan Cheese and Bread and the Daily Bruschetta which both seemed like safe choices.

There were two types of cheese. A blue cheese and a romano/parmesan of some sort served with arpricots, pears, a spicy bundle of seeds and bread. For $6 I thought it was a better serving of cheese than I've received other places (Urban Farmer, Ten 01 -now closed-, etc), but I wasn't a fan of the nutty bread. I generally don't like nutty bread though, so that could be my bias. 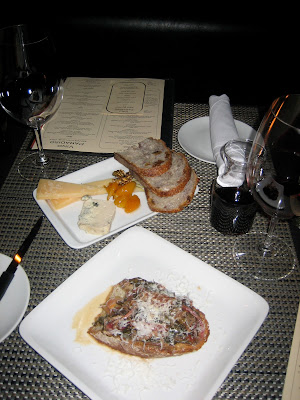 The Daily Bruschetta was amazing. It essentially tasted like a lamb stew on top of thick crispy bread with cheese. The onions were perfect and the meat was soooo tender. By far the best part of this dish was how the bread soaked up all of the juice. 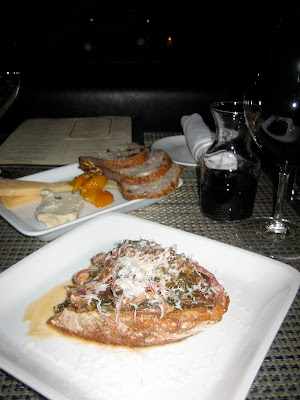 I would definitely recommend this place for a casual glass of wine and a small snack. Vino Paradiso is also a wine retail shop, so if you have a glass of something you just LOVE, you can buy a bottle there and take it home (cheaper than the price on the menu.)
Posted by Kelly at 10:07 PM