We all know the happy hour situation in Boston is less than ideal—but at least Boston has a good excuse (damn Puritans and their strict liquor laws). Here in San Jose, there's just no reason for the lack of happy hours. Except for the part where San Jose is kind of lame, so it makes sense.

Anyway, Nick and I finally managed to catch my sister when she wasn't working or hanging out with her bf, so we threw her in my car and headed off to what looked like one of the only promising happy hours in nearby Los Gatos at Three Degrees restaurant. 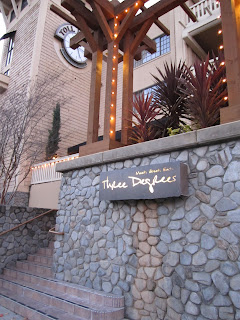 Three Degrees is located inside the Toll House Hotel in downtown Los Gato. Their happy hour, which they've unfortunately dubbed "3D Happy Hour," features 1/2 off most of the starters, salads and sandwiches from their dinner menu, $3.50 glasses of wine, and $8 martintis. (Don't be fooled by the online menu that says martinis are $6 during hh. It's incorrect.)

We seated ourselves in the nearly empty lounge-like dining room and waited a good five minutes before anyone approached us with menus. This might have been understandable if the place was packed, but it wasn't. The hostess noticed our entry, but for some reason ignored us until we were able to flag her down. This poor service would unfortunately continue throughout the night, with customers around us getting frequent attention from the hostess and waiter while we practically had to trip someone to get them to stop at our table. Yes, we were younger than the other clientele, but that's no excuse. Strike one.

For drinks, I tried the Santa Cruz Sangria ($6) made with red wine, brandy, triple sec, and orange and pineapple juice while my sis went with the Pomegranate Lemonade ($7) with pama liqueur, citron vodka, lemon and lime juice, and a splash of lemonade. 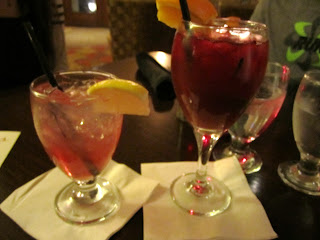 My sangria tasted more like pineapple juice than anything else while my sister's drink was super heavy on the vodka. Unbalanced drinks? Strike two.

For food, we went a little nuts since everything was so cheap. My sis and I shared the Garden Burger ($6.25) with avocado, roasted peppers, lettuce, tomato, red onions and sweet potato fries. 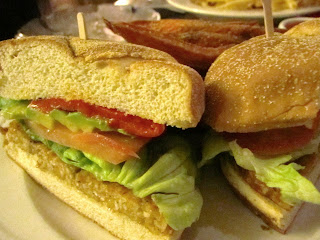 The burger was decent. In my experience, veggie burgers are never that flavorful or moist, so this one was on par with the ones I've had before. The sweet potato fries were nice and meaty. 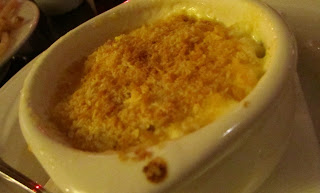 Creamy and cheesy, but otherwise unremarkable. (I think I'm spoiled by the mac & cheese with truffle oil at the Regal Beagle in Brookline.)

Next up was the Grilled Globe Artichoke ($3.75) with lemon aioli dipping sauce. 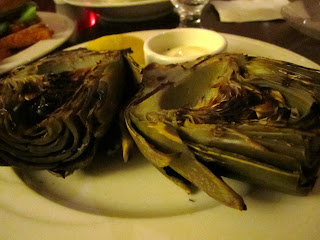 This is a dish you could easily approximate at home, but for only $3.75, why not save yourself the trouble and let someone else do the dirty work? Definitely not worth the non-hh price of $7.50 though.

And finally, we rounded out our meal with the Parmesan French Fries ($3.25). 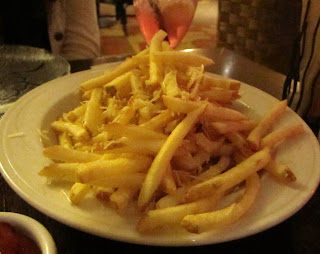 The parmesan fries were just regular fries heaped on a plate and then sprinkled with shredded parm cheese. Good, but also, that's it? Obviously no one worked too hard on this dish.

I think the only thing that saves Three Degrees from striking out completely is the option to have happy hour on the hotel's lovely patio, which was unfortunately closed during our visit due to bad weather.

If you're looking for a better happy hour in Los Gatos, definitely try Pedro's down the street. Free food and great margs!