I work in the same building that houses Radius, and ever since starting work a year and a half ago, I've been dying to try Radius's famous $19 burger.

$19? I know, pricey. But let me assure you that this is no ordinary burger. This is the burger that won the much coveted prize of best burger at the South Beach Wine & Food Festival back in 2008. It's kind of a big deal. 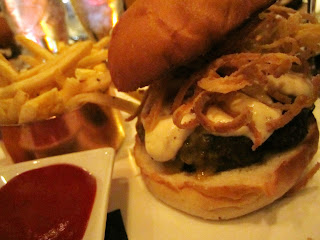 "The Burger" is made with fresh ground chuck cooked on the rare side (a good thing, in this case) and topped with Vermont cheddar, crispy onions and horseradish sauce. 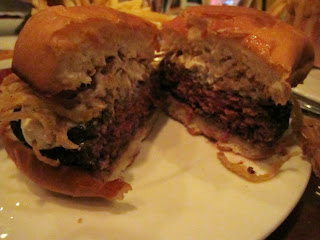 You know when you order a burger with lots of delicious-sounding toppings but then when you actually eat it, you taste all toppings and no actual burger? I hate that.

That's not how it works with Radius' burger. While the cheese adds some nice creamy flavor, the onions some sweet crispiness and the horseradish some bite, the patty itself is thick and juicy enough to still be the star of the show. I like that. 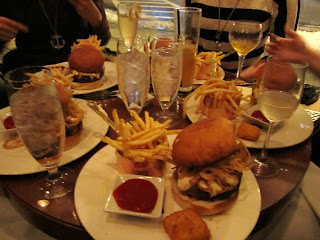 But let's get back to the $19 thing. Having finally tried this burger, I can honestly say I would pay $19 for it... if I had a full-time job in the financial district instead of a part-time job and student loans.

Lucky for me, Radius has been offering their burgers at half-price at the bar every Saturday for the month of January. They did the same thing last April too. That makes me think they'll do it again, so just in case you can't make it to Radius this Saturday, you'll probably have another chance to take advantage of this awesome deal in the coming year.

Since you have to order the burger at the bar to get the discount, you should probably sample some of Radius' very tasty cocktails while you're there. 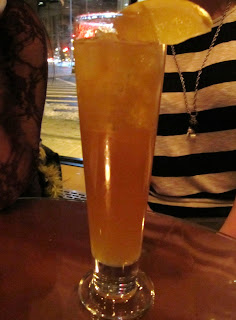 Our second favorite was Anna's Ruby Refresher ($12) made with Belvedere Pink Grapefruit vodka, ruby red grapefruit juice, lemonade and muddled mint. This drink would be amazing in the summer, but it was pretty darn good in the winter too. 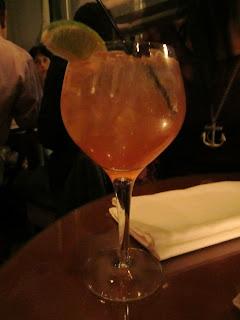 I really liked my Garden Gimlet ($12) which is made with vodka, fresh lime, Thai basil and lavender. Shannon thought it was "too flowery" but I disagree. 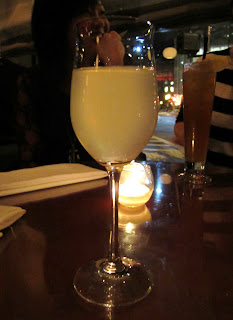 Allison tried Havisham's Dream ($12), made with Absolute Citron, pear liqueur, rose water and a splash of bubbles, which was also very nice. 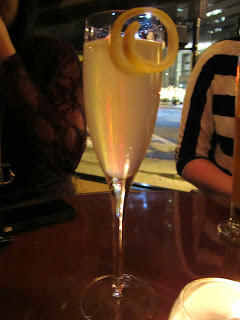 And then there was Erica's choice: The Fireside ($16). Made with brown butter infused Maker's Mark, Belle de Brillet (an expensive pear liqueur), smoked maple and cinnamon, we were told that "this is a serious drink." Good thing Erica's a serious lady, so she had no problem handling this very sweet, very bourbon-y cocktail. The rest of us...not so much. 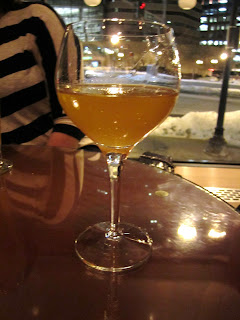 Okay, so amazing burger, delicious cocktails... but Radius just misses getting my full vote of confidence due to the horribly inconsistent service that we received throughout the night.

We waited 20 minutes for our first round of drinks to arrive, which is way too long to wait, especially when we watched people who had arrived long after us getting served first.

We were then treated to our drinks and showered with apologies and attention... until we decided to order another round of drinks after finishing our burgers.

After another 15 minute wait, we were still without our drinks and itching to get on with our night, so we canceled our order (don't worry, our server said our cocktails hadn't been started yet) and just asked for our check.

It was very confusing.

But strange service aside, I would definitely recommend taking advantage of Radius' half-price burger night. Or just go all out and buy the thing at full price. I don't think you'll regret it.
Posted by Kelly at 7:12 PM