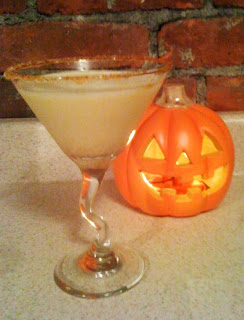 These pumpkin pie martinis are one of my favorite drinks that I've ever made. Once you get the pumpkin & spice-infused vodka out of the way, they're super simple to make. And they taste amazing—like pumpkin pie with whipped cream in a glass.

We were on our way to a costume party, hence the Halloween theme, but these martinis would be great for any girls' night held in October or November.

I looked at number of recipes before attempting to make this infusion. Some used fresh raw pumpkin or cooked fresh pumpkin while others used canned pumpkin.

I'm lazy, so I decided to use canned pumpkin. It actually turned out to be more work in the end, but that's okay. Here's the recipe: 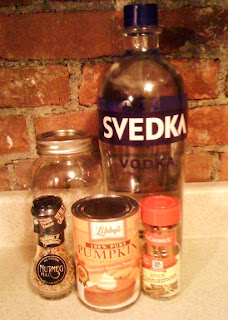 Step 1: Put canned pumpkin in glass jar and fill jar with vodka.
Leave at least a 1/2 inch of space on the top. 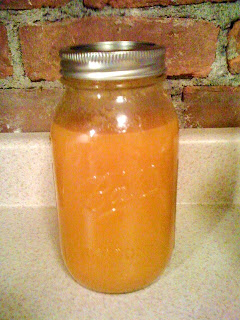 Step 3: Keep jar in fridge for at least a week, shaking jar once a day.

Step 4: Three or four days before you plan to strain the vodka, add 3 sticks of cinnamon and a good couple pinches of nutmeg. Continue shaking regiment.

Step 5: Strain the vodka.
This part would have been a lot easier if I hadn't used pumpkin puree...

Place drink strainer over glass, pour vodka/puree mixture into strainer, use muddler or similar tool to squeeze out liquid. 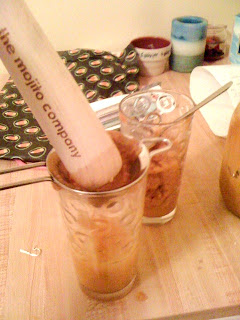 Step 5: Pour infusion back into washed-out glass jar and keep in the freezer until you're ready to drink it. 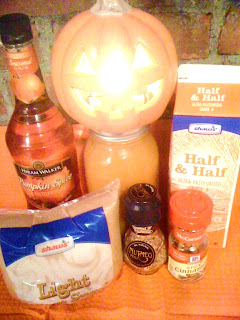 Stir 1 cup of brown sugar and 1 cup of water over medium heat until it just starts to boil. Turn off heat and let cool.

Step 2: Combine 1 part pumpkin & spice-infused vodka, 1 part half & half, and 1 part simple syrup over ice in shaker. Add a pinch of cinnamon and some nutmeg.

Step 4: Cinnamon-sugar the martini rims.
Rub the rim with a lemon rind. I forgot to buy lemon so I poured some Pumpkin Spice liquor into a dish and used that.

Combine cinnamon and sugar in a dish.

Run rims through cinnamon and sugar mixture until coated.

Step 5: Pour mixture into rimmed glass and top with a sprinkle of cinnamon. 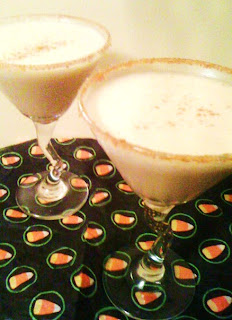 Enjoy!
P.S. I bought that Pumpkin Spice liquor because I was worried my infusion wouldn't have enough flavor and I wanted a back up. The liquor actually tasted more like spice than pumpkin and had a chemical aftertaste. I tried using it in the recipe above with regular vodka as a substitute for my vodka infusion and the consensus was that those martinis were nowhere near as good as the other ones. So I recommend just going the extra mile and making your own infusion. Trust me, it's worth it.
Posted by Kelly at 1:27 PM