So Doug came to visit. And we had a pretty amazing weekend.

On Friday, we had dinner at The Barking Crab, drinks at my very favorite place in Boston, Drink, and more drinks served by our fav bartender, Robby, at The Regal Beagle.

On Saturday, we hit up Newbury Street and then took the commuter rail out to the New England Revolution vs the Seattle Sounders game in Foxboro.

And then came Sunday. Ah Sunday...

Somehow Sunday turned into a bar crawl of epic proportions. Here's a map of our route if you don't believe me. 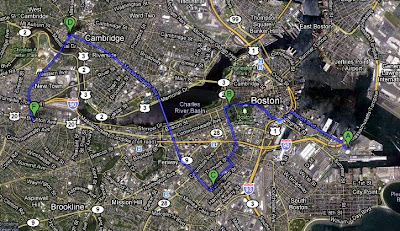 Let's talk about it.

Our crawl started with our tour of Harpoon Brewery at 3pm, which is the last tour of the day. If you want to go on the last tour too, you should make sure you're out at Harpoon by at least noon to buy your tickets, otherwise, you might not make it in. 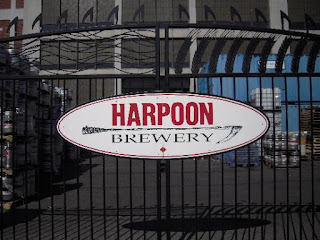 I could tell you all about the Harpoon tour...but that might spoil the fun if you want to go on it. All you really need to know is that the tour takes about 15 minutes and then you have 30 minutes to "sample" aka chug as much beer as you want. Fun!

Because Doug and I were a little tipsy, and because I sometimes have trouble estimating how far apart things actually are, we then decided to walk to the original Cheers across from the Public Garden. What I assumed would be a quick walk actually turned out to be a 2.3 mile trek. Oops. At least we really appreciated those beers once we finally got them... 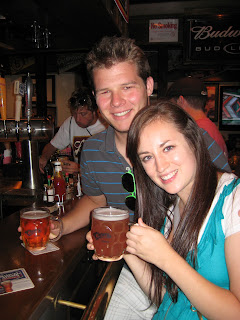 I can't remember what Doug had but I tried the Purple Haze brewed by Abita in Louisiana. The bartender described it as a Blue Moon with a hint a raspberry. Tasty.

From there, we were off to dinner at Toro. I had so much fun when I went there with the fam, but I wanted to take Doug there too because I knew he would try some of the weirder things with me.

We started off with the more normal, ordering the ceviche and patatas bravas (fried potatoes). Then it got a little more fun. We tried the mussels with blood sausage, which were very good. And then came the crown jewel of our meal: Asado de Huesos. That's roasted bone marrow with radish citrus salad and oxtail marmalade. 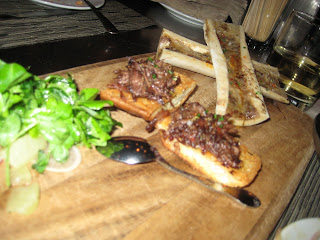 The bone marrow was rich and creamy and Doug and I both loved the sweet oxtail marmalade. Having a few beers in our systems probably helped reduce the gross-out factor...but it was so good that I would order it again, even completely sober. Ha.

From there, we decided to head out to Cambridge. We stopped in at Grendel's for a round of beer and some shots. Now, shots and I are not the good friends we once were, but Doug convinced me that I needed to try his favorite shot, a Dead Nazi. Dead Nazis are made with Jager and Rumple Minze peppermint liqueur. 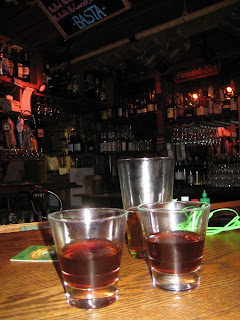 Sounds kinda gross, but they're actually not bad. Went down much smoother than the shots of Patron or, gag me, SoCo Lime that I've been treated to at bars before. Good choice, Doug.

From there, we hopped across the alley to Tommy Doyle's. There was a great band playing upstairs so we stayed for quite awhile. 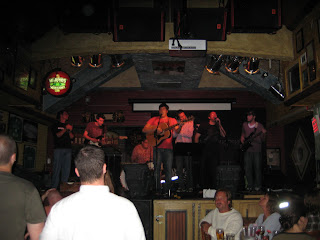 An hour or so later, the roomie and her friend Erica were done with their movie, so we all met up at Sunset Grill & Tap in Allston. I had a one of their many pumpkin ales which I think I enjoyed? They'll rim your glass with cinnamon and sugar if you ask nicely. Fancy.

And then Doug went on a photo-taking frenzy. 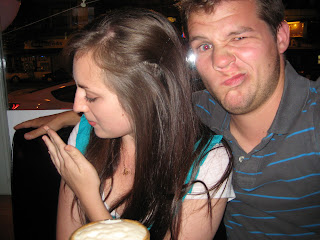