Remember my friend Lauren? Her blog, 32 Above, chronicles her adventures in Monterey. And here's the guest-post she did about the last time I went to visit her there.

This time around, we hit up happy hour at Esteban and then got dinner at Cannery Row Brewing Company.

We stopped at Esteban first, but I liked Cannery Row Brewing Co. a lot more, so we're going to talk about that one first.

From what Lauren tells me, Cannery Row Brewing Company is a fairly new addition to the Monterey dining scene. There's a large dining room, a nice patio outside (with heat lamps!) and a pretty sweet bar. 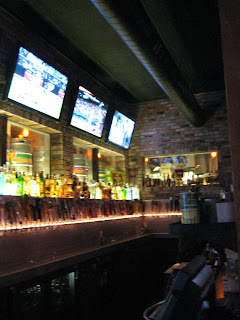 We began our trip to CRBC with some drinks. They have 73 beers on tap as well as several bottled beers. I'm a big fan of cider, so I tried whatever cider that they had on draft. Lo and I liked the sound of the bottled Wells Banana Bread beer, but it turned out to be pretty undrinkable. Like banana-flavored laffy-taffy mixed with not-so-great beer. Gross. 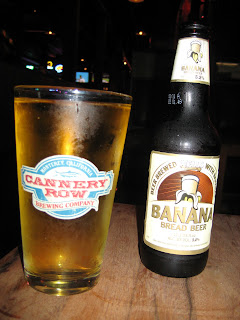 Happily, our food choices were much more satisfying. Lauren just recently discovered the deliciousness that is corn dogs, so we decided to try the mini corn dogs with cheese dip. 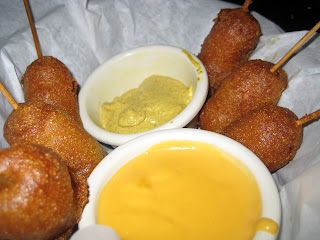 They were pretty much amazing. Crispy on the outside with flavorful corn batter and beef franks on the inside. Delish.

Lauren is also having a bit of a love affair with mac n cheese right now (which I fully support), so we ordered the mac n cheese with ham, mushrooms, leeks, spinach and breadcrumbs. 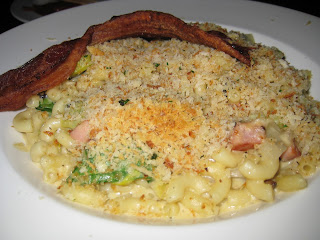 This was some of the best "grown up" mac n cheese that I've ever had. The cheese sauce was so rich and creamy but the additions of the spinach, mushrooms and leeks kept things fresh and flavorful. I would eat this everyday if I could. That good.

We also liked the fact that CRBC topped the walkway to their front door with pennies. Nice. 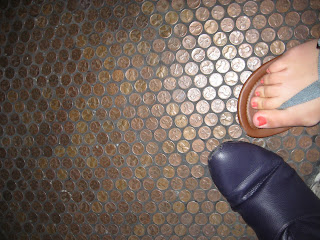 And now back to Esteban...

Esteban pretends that they are located "next to the historic Casa Munras hotel," but they're really right inside it. They're definitely going for a classy atmosphere, what with their fireplace and dim lighting, but it all felt a little contrived to me.

Happy hour at Estaban is from 5-7pm with $4 house wines and mojitos, $3 sangria and beers, $1 pintxos and various half-priced tapas.

Lo got some sangria and I got a mojito. Or it might have been the other way around. Either way, our drinks were decent. 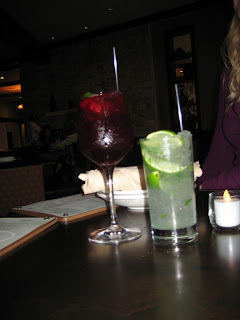 As far as food, we each got a huevos diablos with shrimp and peppercini ($1) and a date with blue cheese and bacon ($1). We shared the watermelon with goat cheese and black pepper ($1). 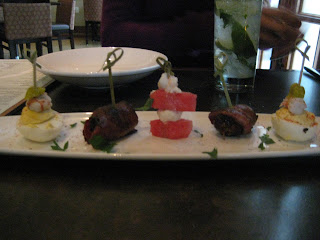 The deviled eggs with shrimp were ok, but kind of a strange combination. The watermelon was good too, but it was the dates with blue cheese and bacon that we really liked. So rich, but so good. But also, so small. Great that all the pintxos were $1 during happy hour instead of the regular $2, but I couldn't help remembering the 50 cent tapas that I've had in Boston and that made it hard to be impressed by the cheaper price.

So, while I enjoyed catching up with Lauren over cheap drinks, I don't think that I would ever suggest a return visit.

And now fast-forward back to CBRC.

We were pretty full from our corn dogs and mac n cheese so we decided to keep it light for dessert. Did you know that eating green apple sour straws and peanut butter malt balls while looking through pretty cupcake cookbooks is the perfect way to end an evening out with an old friend? Well, now you do...