What: Tasty Burger
Where: 1301 Boylston street behind Fenway Park
Honeys Heart: The decor??

Nick flew out to visit me as a belated birthday gift and because we both enjoy a good burger, I thought he would be the perfect person to join me in trying Boston's newest burger joint, Tasty Burger.

Tasty Burger is located in a refurbished gas station that boasts two big garage doors that can be opened to let the fresh air in on nice, warm days. (Which won't happen again until sometime next May...if we're lucky.) 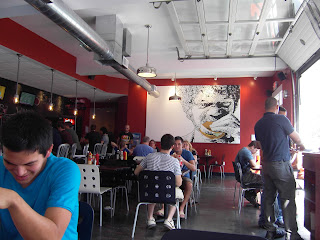 The restaurant's decor pays homage to what is apparently a famous scene from Pulp Fiction. I've never seen the movie, but I liked Tasty Burger's vibe. Laid back and fun. Perfect for a burger joint.

Nick is a huge fan of blue cheese, so he ordered the Gorgonzola Burger ($5.50). 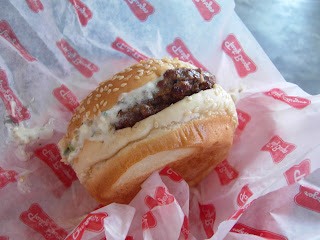 Lots of blue cheese, just like he likes it.

I have been having a bit of a love affair with caramelized onions, so I chose the Onion Burger ($5.50) with "cheese" and "carmelized & crisply fried" onions. 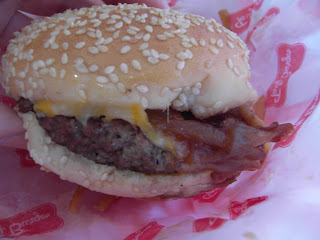 Anything topped with cheese and caramelized onions is hard to mess up in my book, and my burger did not disappoint on that front. However, the patty itself was nothing too exciting. While it was thick and juicy, most of the flavor of the burger seemed to come from the cheese and onions. When I order a burger, I want to taste that meat too. I guess next time I might just have to go with simpler toppings so the patty comes through more. Or ask for less cheese and onions. But that would be silly. 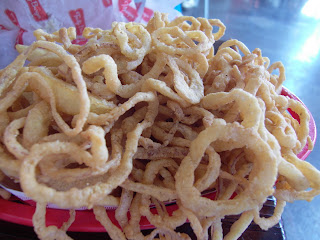 The fries were decent and the onion strings were enjoyably crispy. Neither were especially outstanding though.
To keep us hydrated, Nick tried the Raspberry-Rickey Slushie ($4) and I went with the Lime-Mint Slushie ($4). 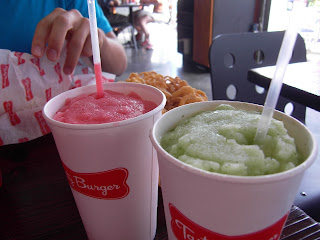 Both were quite flavorful, but as the ice melted a bit, Nick and I became distracted by the large pieces of lime pulp that we kept slurping up through our straws. Perhaps this is also some sort of reference to Tasty Burger's namesake? It was quite an unpleasant one though, and Nick and I barely finished half of our slushies before we were forced to abandon them.
And so, while the atmosphere was fun (free pool tables in the back!) and the service fast (our burgers came out in under 10 minutes), overall, Tasty Burger was a bit of a disappointment.
However, from their Yelp reviews, it seems that the kitchen is actively working to improve their food based on the feedback they receive from customers. I like that, so I'll probably return in a month or two to give Tasty Burger a second chance. Also, I really want to try one of their shakes. Those suckers have 4 scoops of ice cream in them. Sounds promising...
Also on the Menu
In addition to burgers, the Tasty Burger menu also features "shafts" (hotdogs), salads and chicken nuggets, and the bar serves beer and wine ($13 for a pitcher of Bud- yikes!).
$10 Student Special
Students can take advantage of the almost-not-worth it "Student Special" which features a hamburger or cheeseburger, fries and a Bud or Budlight for $10. That's a saving of  75 cents if you get the hamburger or $1.25 if you get the cheeseburger. So go with the cheese...?
Posted by Kelly at 4:03 PM