For some reason, UP gave us a week off in October. Over my four years in college, it became tradition for me to visit Lauren at Cal Poly in San Luis Obispo during that week-long break. Unfortunately, Emerson does not follow the same schedule as UP, so last October came and went without a visit to SLO.

This year, I didn't get to go to SLO either, but Lauren's visit two weekends ago made up for it!

I'd been working on a freelance article about the best brunches in Boston, so I dragged Lauren along on my research. Luckily, I don't think she minded.

First order of business: decide where to go!

Masa had made my short list, but I was skeptical about its ability to hold its own against Boston brunch institutions like Centre Street Cafe and The Paramount. So Lauren and I decided to try it out...and I'm so glad we did.

Upon being seated, we were surprised to find that Masa offers a Fiesta Brunch special from 10am-3pm on Saturdays and 10am-11pm on Sundays. The Fiesta Brunch includes two courses and unlimited coffee and tea for only $7.95. (What it says about my research skills that I didn't know about this until the menu was placed in front of me will be addressed at a later date...)

Lauren is a bit of a coffee fiend so she was quite content with the unlimited coffee deal and I enjoyed Masa's choice of orange something tea.

For our first course, Lauren ordered the bowl of fruit while I chose the Caramelized Plantain Empanada. 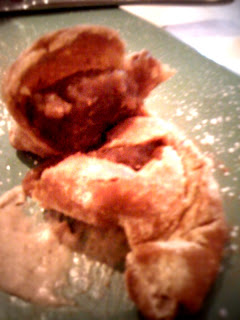 We ended up sharing which was fine by me because, while the empanada was very good, it was also incredibly sweet. Not sure I could have finished the whole thing on my own. (Lo was pretty sure she could have.)

For our second course, Lauren got the Eggs Benedict. 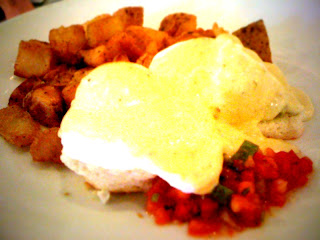 Hollandaise sauce has always sort of grossed me out but I was happy to find that Masa's Hollandaise was very light and had a hint of lime. I also enjoyed the homefries. They were meaty on the inside and slightly crispy on the outside with the perfect amount of seasoning. Delish!

For my second course, I ordered the Huevos Rancheros. 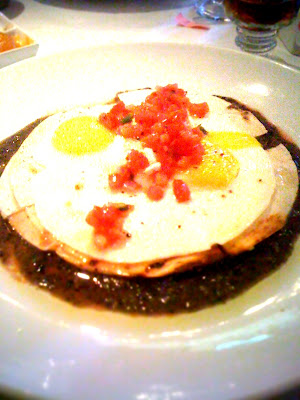 Masa serves its Huevos Rancheros as eggs over easy on top of a thin and crunchy quesadilla surrounded by black beans. Very filling and quite enjoyable.

Along with our two courses, we were also served a basket of blue corn and yellow corn cornbread with three sauces: chipotle cranberry, apricot jalapeno and maple butter. 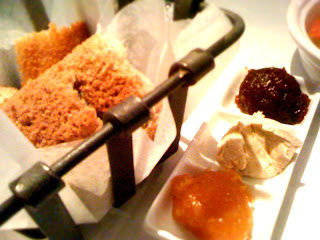 Pretty sure we didn't eat again until dinner, we were that full. And for only $8!

We didn't get any drinks besides our complimentary coffee and tea, but Masa offers some pretty tasty-sounding brunch cocktails like the Latin Bellini ($8.50) with champagne and guava and mango puree. If you're a fan of Bloody Marys, be forewarned that Masa uses jalepenos in their recipe so theirs are nice and spicy!
Posted by Kelly at 4:56 PM