Cutty's just opened last weekend and when I found out about it on Saturday morning, it was an easy decision to redirect my planned "run" in Cutty's direction.

Now, Cutty's was a little difficult for me to find because 1) I'm not good with directions, 2) I had never been to that neighborhood before and 3) Cutty's had no sign outside their building.

Hopefully they've fixed that, but here's what the building looks like in case you're like me and addresses are hard sometimes: 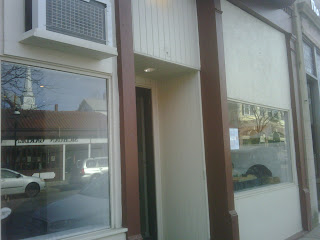 Cutty's thinks of itself as a "fast casual restaurant that sells inexpensive premium-quality breakfast and lunch fare." I'm not sure that I can completely agree with the "inexpensive" part, but their commitment to using seasonal, local and organic ingredients is definitely evident in their menu.

I was there around lunch time and had a hard time picking a sandwich because they all sounded so good. In the end, I went with the small eggplant spuckie ($3.75): olive salad, housemade mozzarella and roasted eggplant on ciabatta. I'm usually not a huge olive fan, but this sandwich was delicious. The olives perfectly complimented the eggplant and mozzarella without overpowering the sandwich. 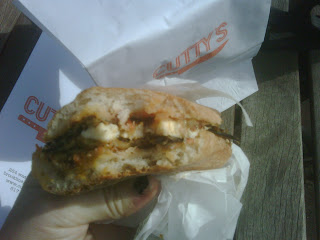 I'll admit that $3.75 is not a bad price at all, but be advised that when they say small, they do mean small. The large eggplant spuckie goes for $7.25 and if you're hungry I would definitely recommend upgrading to the larger size.
Other sandwiches on the menu include:
There's also salads and snacks, plus a breakfast menu. And Cutty's site promises breakfast sandwiches are on the way. That upcoming addition especially makes Cutty's remind me of my favorite super-small but super-good sandwich place in Portland: Little Red Bike.

And one final note: Cutty's is owned by Culinary Institute of America-trained chef Charles Kelsey. This guy obviously knows what he is doing and I hope that Cutty's will allow him to show off his skills for a long time to come.
Posted by Kelly at 9:33 AM