Occasionally I get in a rut and frequent happy hours with the same types of food on their menu like burgers, cheese, mini sandwiches, various fried vegetables, with the occasional unique item, so it was a breath of fresh air to go to happy hour at Pambiche, a Cuban restaurant.

Adam and I met friends, Shannon and Steve, at Pambiche Friday night. One of their favorite happy hours with great food, prices, and distance from their apartment. It seems as though they are becoming regulars while enjoying living in a very wonderful apartment a story above the restaurant in the vibrantly colored building on NE Glisan. At 5:30, with happy hour nearing it's end, it was busy and completely full inside, so we opted to brave the wind and sit under a heat lamp outside.

We ordered Empanadas ($3 each), which Steve quite wonderfully described as hot pockets but way way better. Adam and I shared one beef and one chicken and corn, but Steve and Shannon's spinach and cheese empanada looked pretty wonderful. 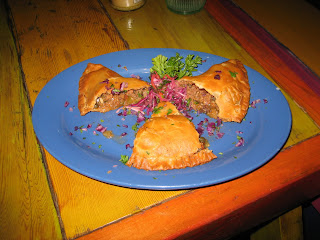 Both pairs ordered Croquetas ($3) available with ham, chicken, shrimp, or codfish and potato. Adam and I wanted the shrimp, but they were out so we went with Steve and Shannon's ham suggestion. These were so good, and I definitely want to return for the shrimp croquetas. 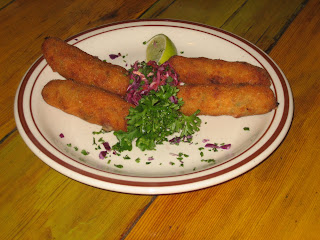 Finally Adam and I chose the $2.75 Moros & Cristianos (black beans with rice and spiced pork) and Steve tried something new by accidentaly ordering Cuban red beans and rice ($3). I think he was glad he did though! 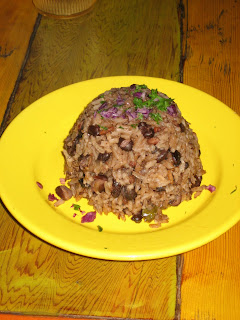 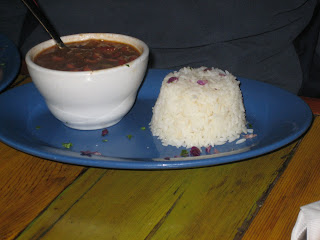 We skipped drinks, coffee or dessert though all looked amazing and wrapped up with an $11.50 bill (for Adam and I), not too shabby! I heard a woman speaking quite highly of their white wine sangria, their coffee is Stumptown (already a fav) but apparently incredibly prepared and the dessert case was full of tiny tasty treasures so I think that means I must go back... I am usually not a dessert person but I almost went for one of the beautiful looking desserts in the case. 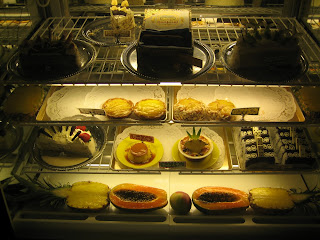 I believe Pambiche has also been featured in Portland Monthly for their breakfast, which our friends also spoke highly of, so we'll definitely be heading over to the east side for breakfast some weekend morning!
Posted by Kelly at 10:39 AM