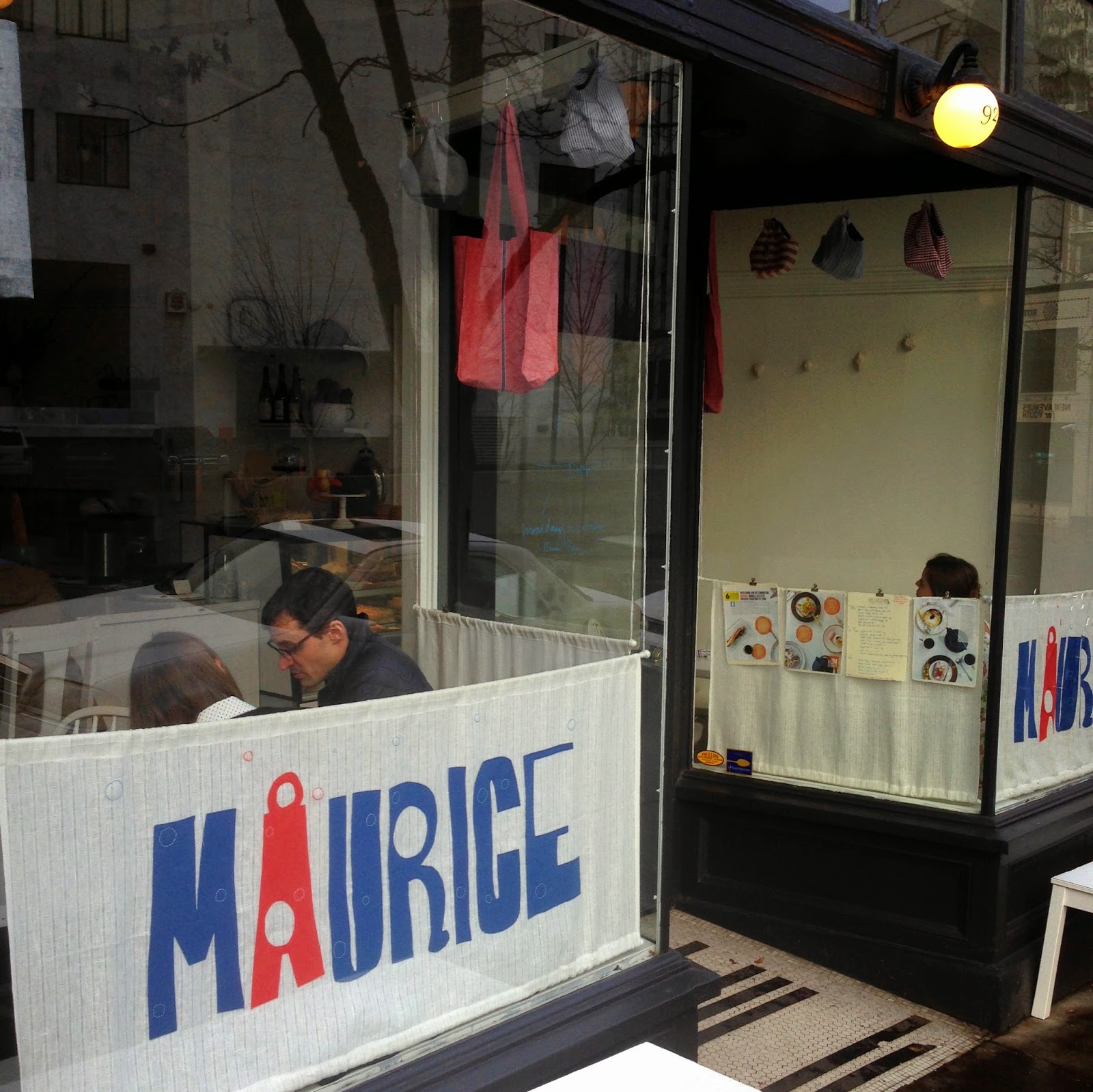 The basics:
but...
---
Maurice is owned by Kirstin Murray, a well-respected Portland pastry chef who has worked with big names like Boston's Barbara Lynch (owner of my beloved Drink) and Portland's Vitaly Paley. Described as a "modern pastry luncheonette", the restaurant/pastry shop serves pastries, desserts, and Scandinavian-influenced small plates, as well as beer, wine, and tea. 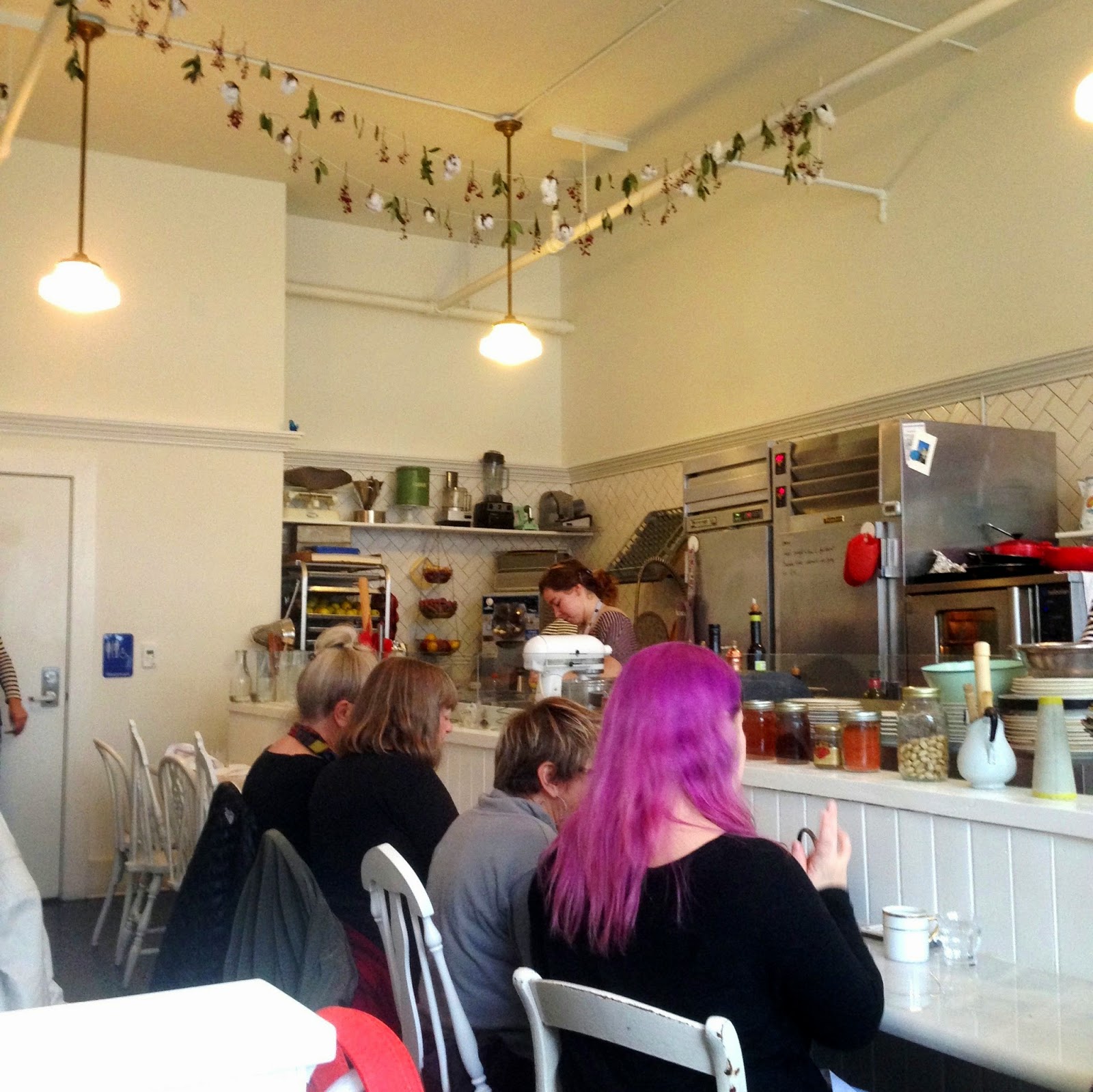 Maurice has been open for a year and it's taken me that long to finally cajole Doug into going with me. He claims to not share my sweet tooth (though evidence suggests the contrary), so I think it was the promise of lefse that finally hooked him.

We each ordered a dish off the "luncheonette" portion of the menu. Doug choose Lefse with Pheasant Confit, Apples, and Sunchoke ($10). 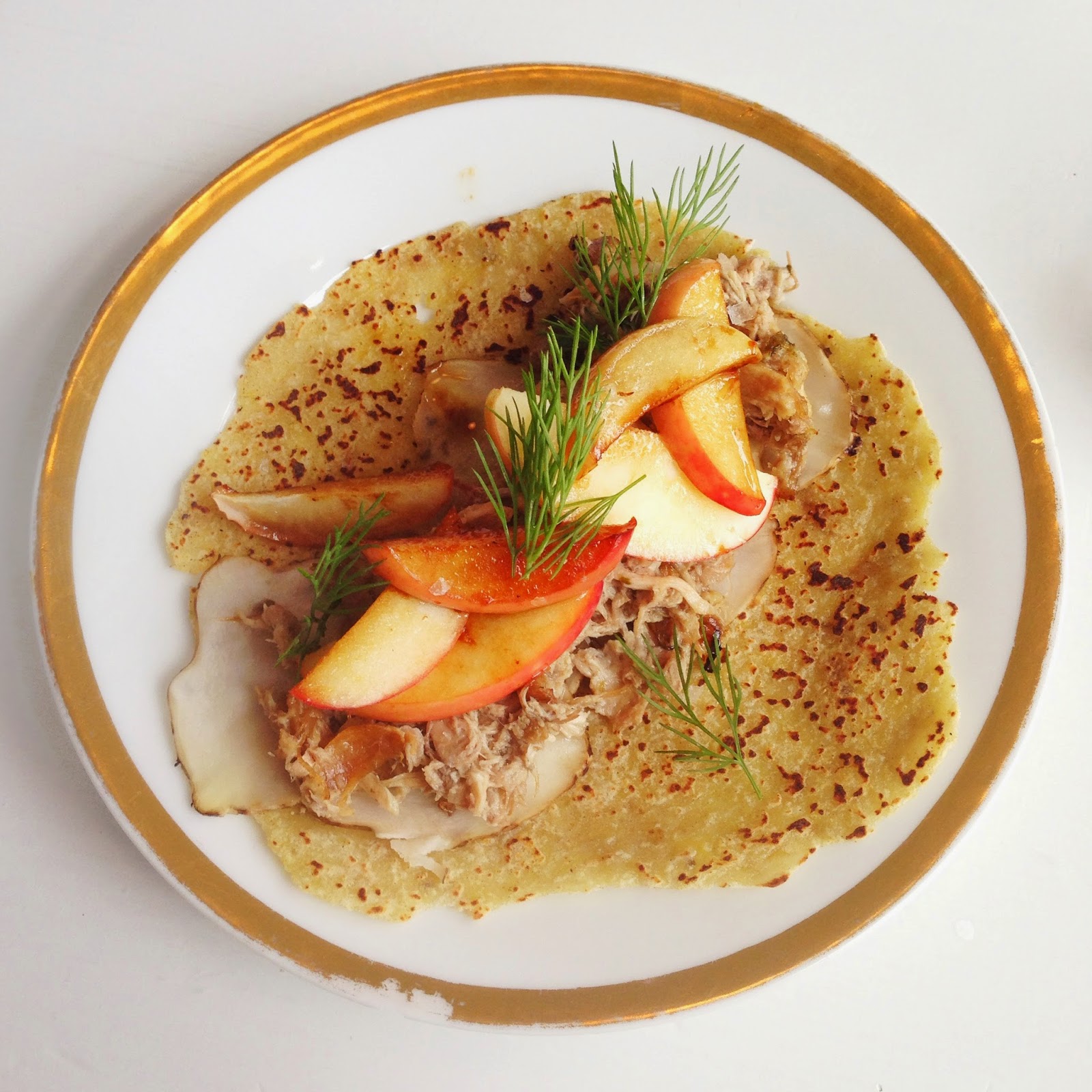 Obviously, it was a gorgeous dish and quite delicious. But I think Doug was hoping that for $10, he would be a little more full afterward. 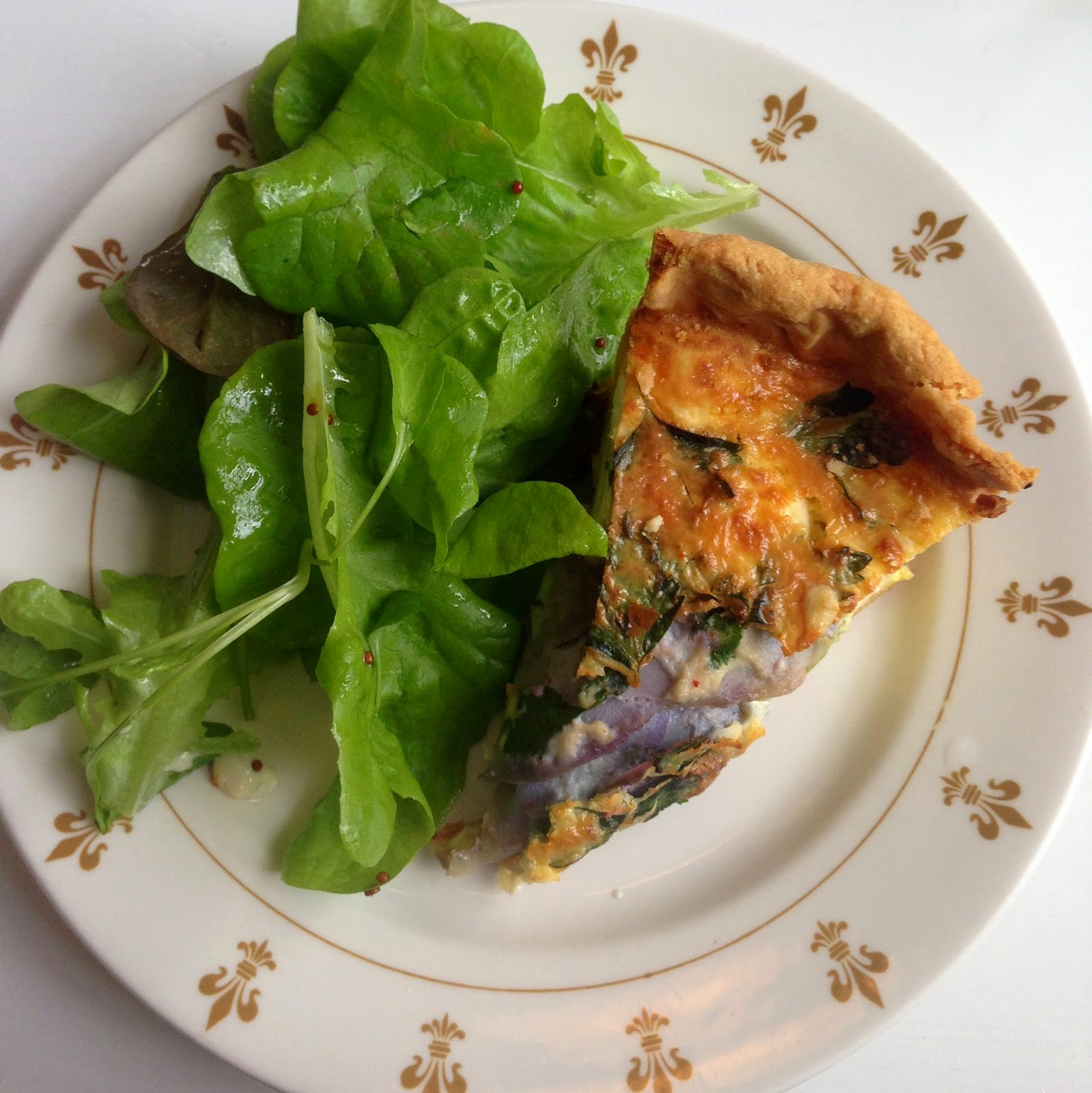 The quiche was incredibly creamy, probably some of the best I've ever had. For me, it was the perfect light lunch.

In the end, I was smitten but Doug, not so much. For him, leaving a restaurant still hungry is never a good sign. True, we could have ordered more, but the service had been slow to begin with, we didn't want to spend more money, and we had things to do. A bit of a bust... but I was determined to give Maurice another try.

I decided that maybe it would be better for a girl's date, so I took Allie there a week or so later for an afternoon snack.

Though we were the only customers there save a gentleman who had already been served, we waited at our table for a good ten minutes without any acknowledgement from the three-person staff before we got antsy and wandered up to the register to see if we should just order our desserts up there since no one seemed to be interested in coming to our table. We were told to a server would come to us. Okay... 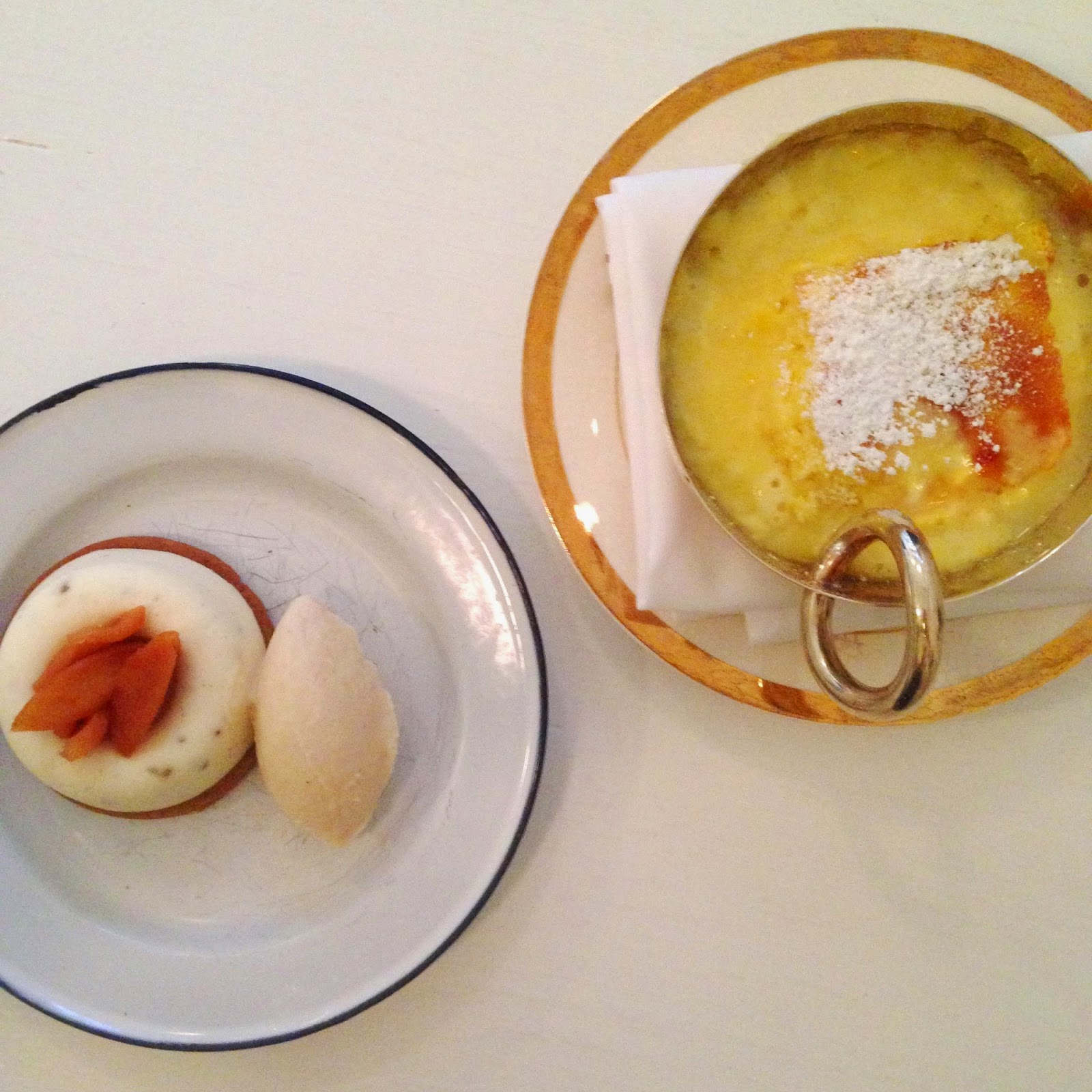 The cheesecake was rich, creamy, and not-too-sweet, and perfectly complimented with a luscious brown-butter ice cream. The souffle reminded us of a melty lemon bar and we loved the robust meyer lemon-y taste. So, so good.

We also each had a glass of wine. Prices weren't listed on the board so I was a little surprised when my selection turned out to be $15 for a glass. Yikes.

In the end, our girl's date totaled up to $41 for dessert and wine. On the plus side, everything was delicious and obviously lovingly crafted. But seriously, thank goodness I could chalk this up as a business expense because even though I firmly believe in treating myself now and then, this would have been a serious hit to my wallet for such a small indulgence.

The final verdict: good thing Maurice is as expensive as it is, otherwise I would be in there way too often. I'll definitely save it as a "special occasion" spot- though a "special occasion" spot usually has the added benefit of superb service so... maybe not? But it is so cute and the desserts are so good. Verdict's still out on this one I guess.
Posted by Katie @ Happy Hour Honeys at 11:54 AM