I'm pretty confident that Doug and Adam don't read this blog as often as they claim to, so I feel like I can tell you guys the truth. Kel and I chose Levant even though we knew it was much pricier than our usual date night spots- and that's exactly why we invited the boys. I mean, we can't always foot the bill for our dining habits, right?

In the end, our plan was somewhat justified in that it was a pretty spendy night (thanks for taking care of the check, boys!). But it also kind of backfired on us because instead of just two people being unhappy that they spent a shit-ton of money on food that was good but not completely satisfying, we were now four people who were unhappy. Oops.

Let's talk about what happened.

Kel, Adam, and I arrived first and ordered cocktails. I chose the Hammurabi's Code ($12) with saffron vodka, dry curacao, yellow chartreuse, absinthe and lemon. I should have anticipated that with the combo of yellow chartreuse and absinthe, the herbal, anise flavor could slightly overwhelm this drink- and it did. It was very pretty though. 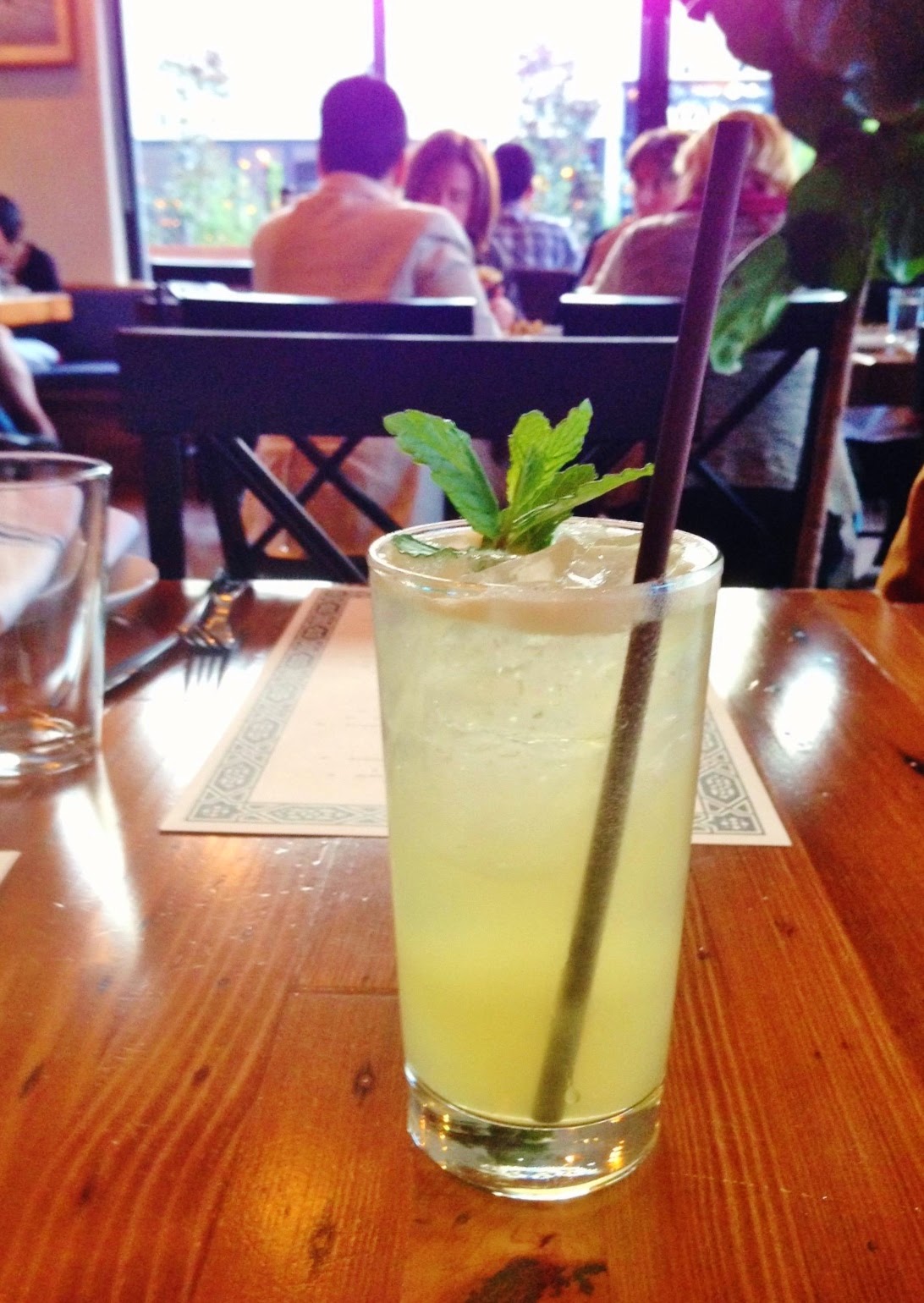 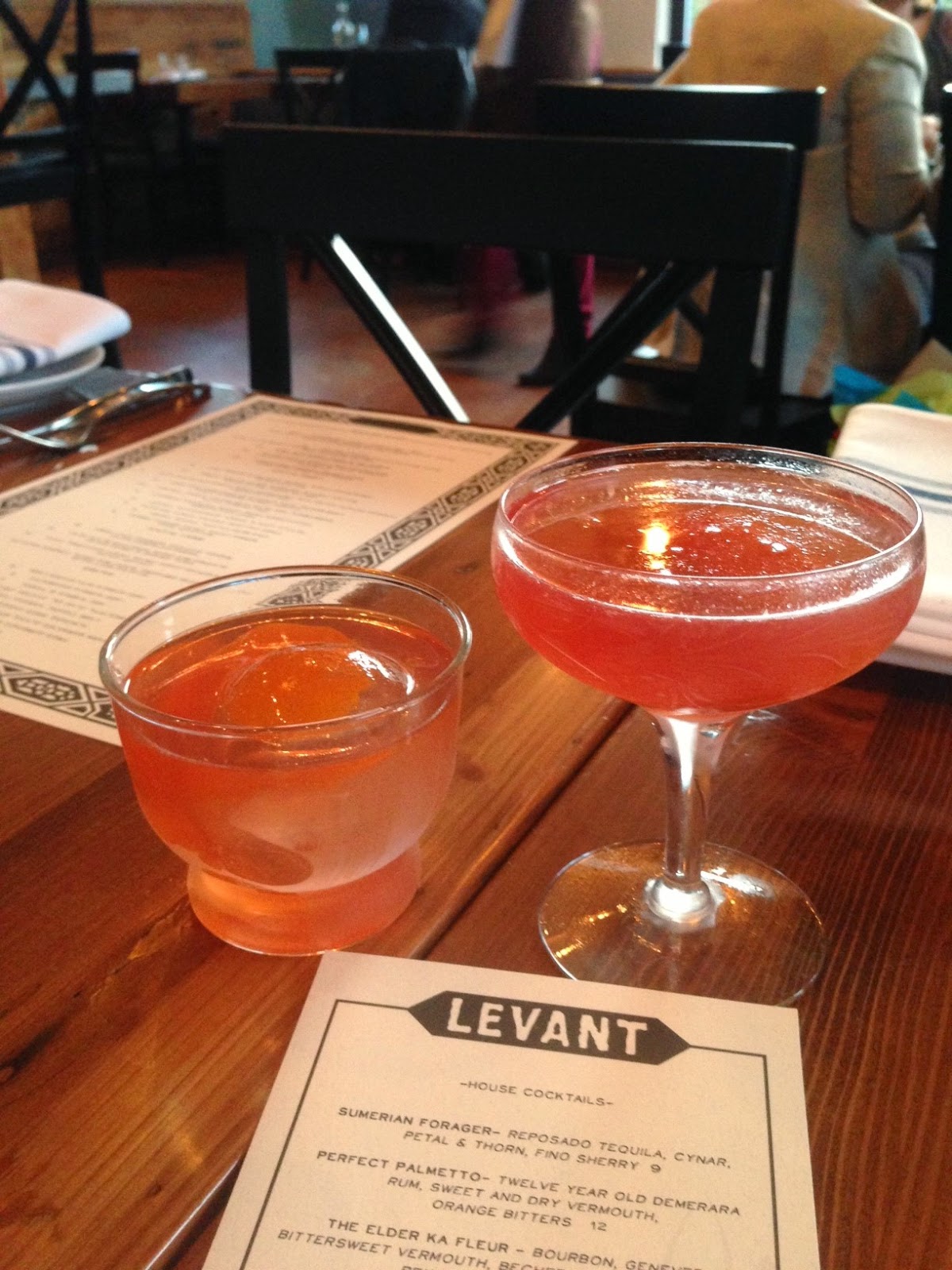 The cocktails were well crafted (as they should be with a $10-$12 price tag) and one of the best parts was the unique glass that each drink arrived in.

For food, we basically just went with whatever our waiter recommended, except that Adam immediately knew he wanted the Wood Fired Pita with Olive Oil, Za'atar and Urfa Biber Pepper ($4) with Hummus and Spiced Lamb ($8). This ended up being one of our favorites. The hummus was very creamy and smooth and I loved the touch of sweetness in the spiced lamb. 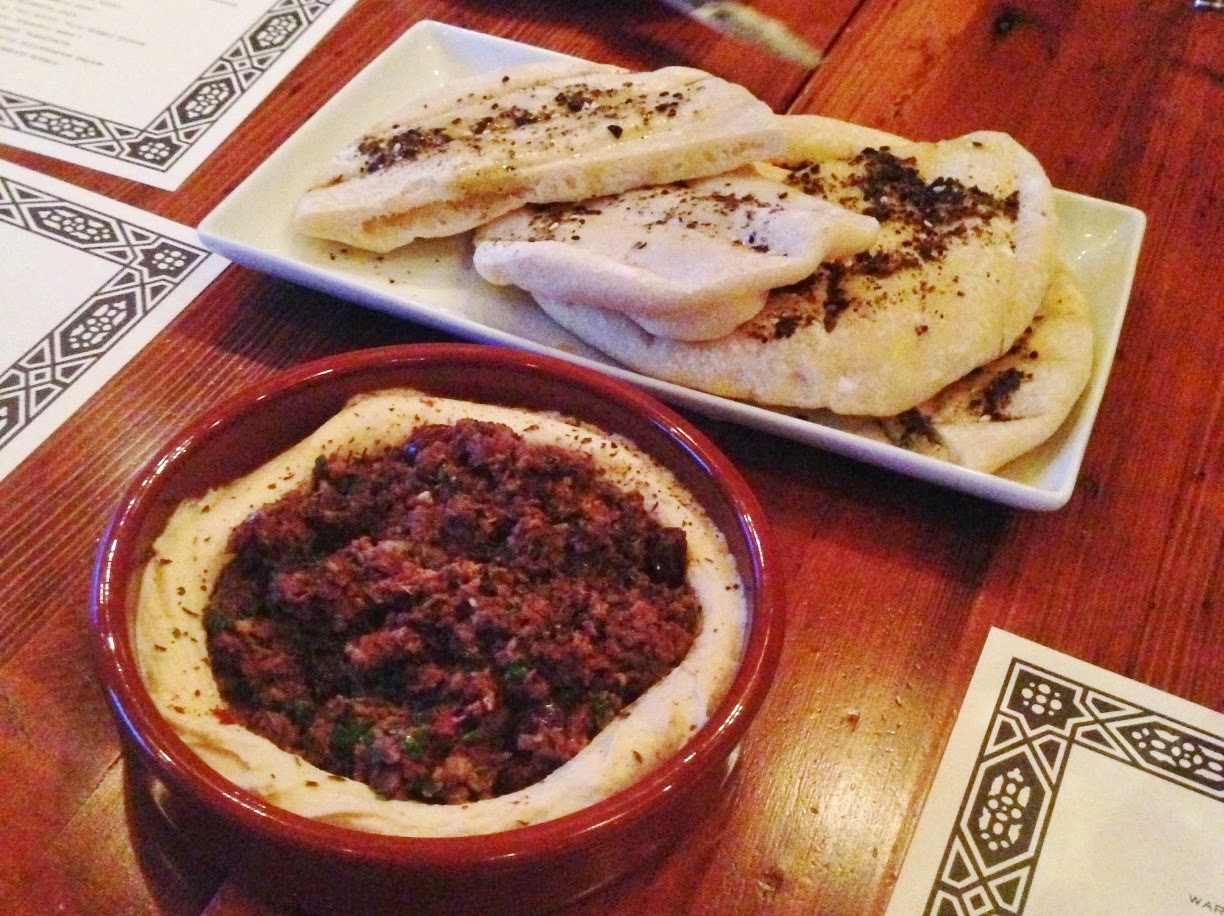 Off the starters menu we also went for the Lamb "Cigars" with Harissa Yogurt ($5) which were good, but there were only 3 so we hoped they would arrive before Doug. No such luck. Sharing is caring though... 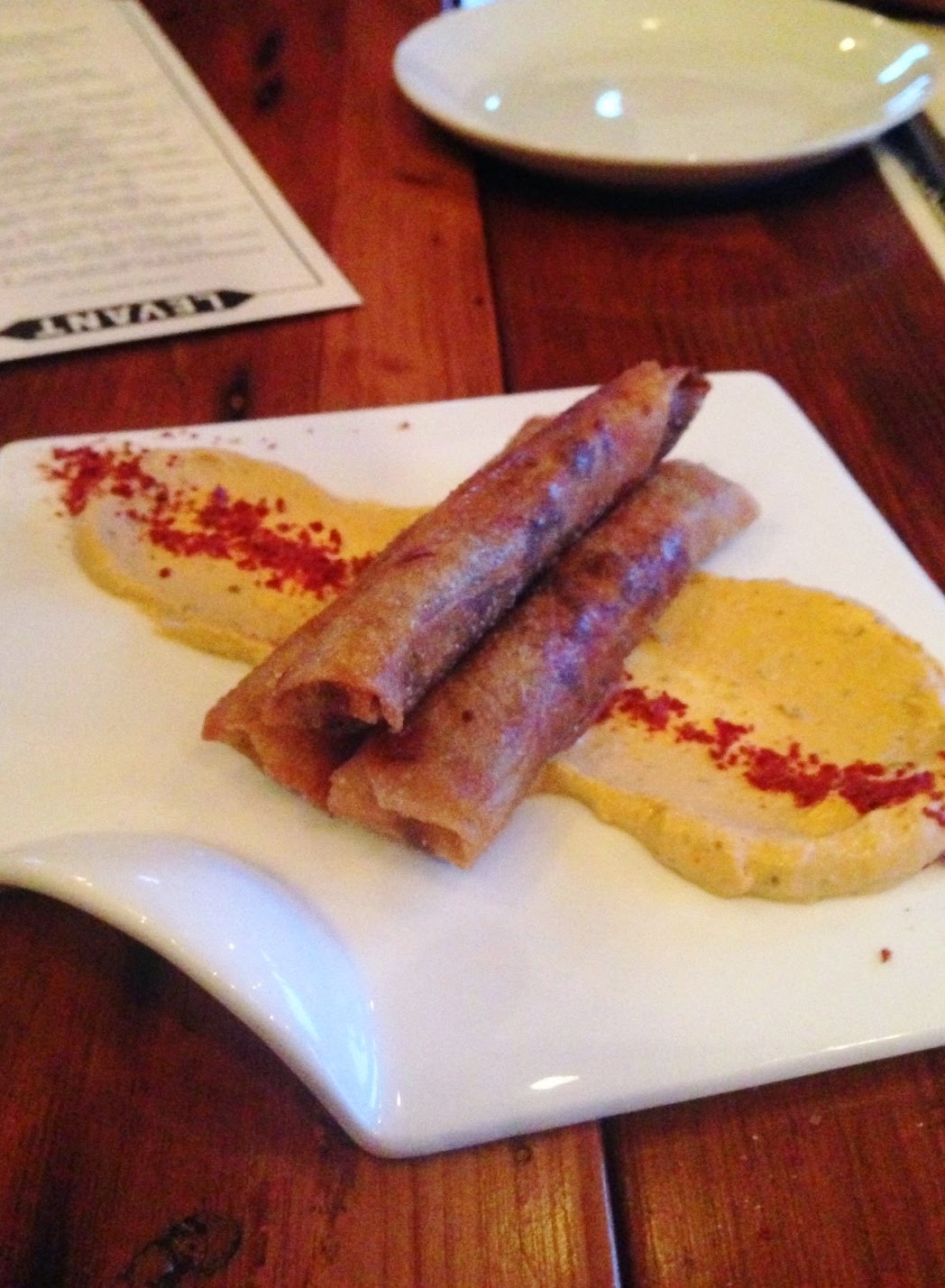 Time for a second round of cocktails. Sticking with gin, Kel ordered the Bacall ($12) with gin, creme de violette, lemon and sparkling wine. Again, very pretty but the $12 price tag was definitely up there. 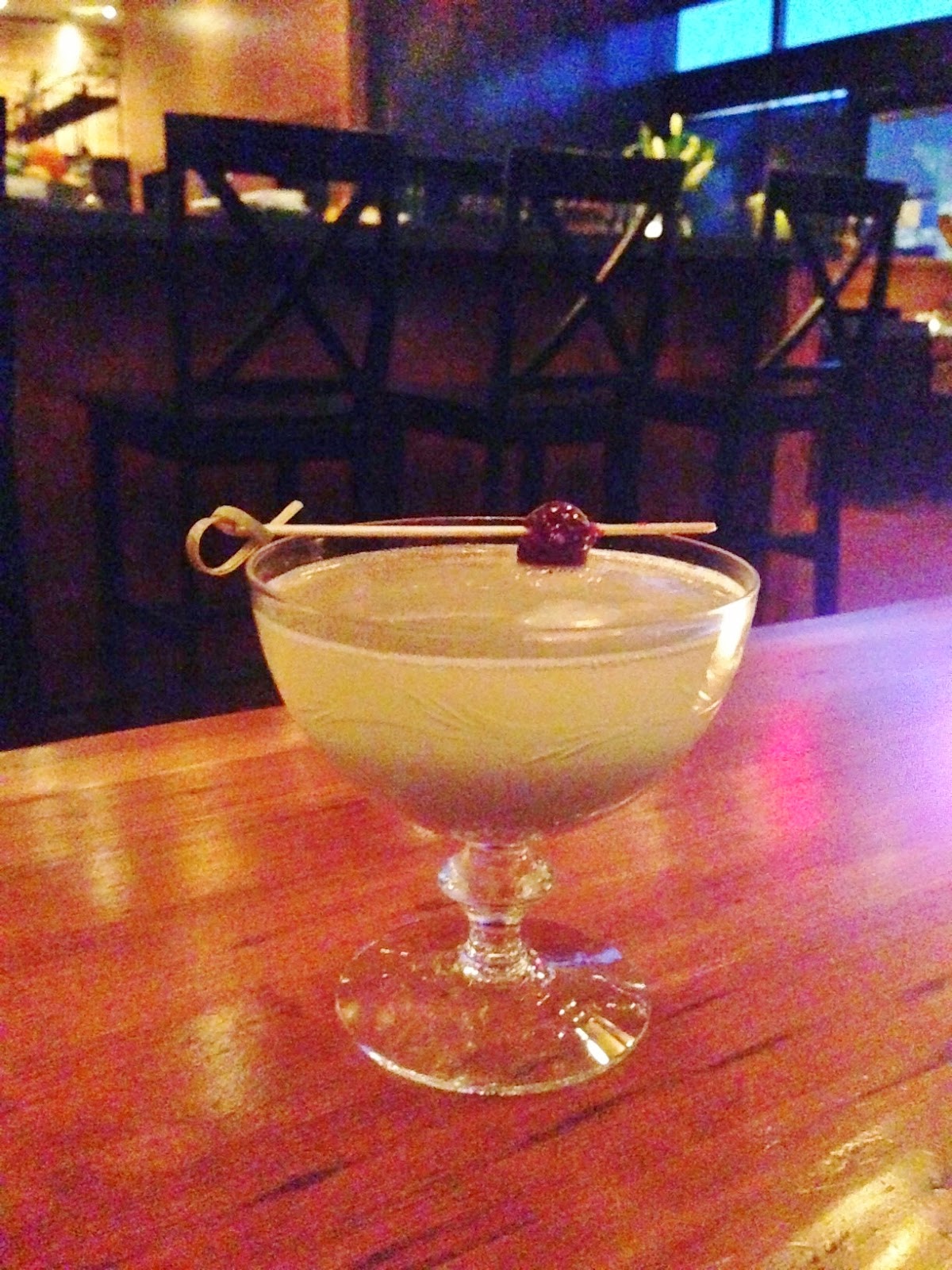 Adam scaled back and opted for their Brooklyn, which is a $5 mini cocktail of rye whiskey, Cio Ciaro, maraschino liquor, and dry vermouth. It is seriously tiny. Half the price and definitely half the cocktail. 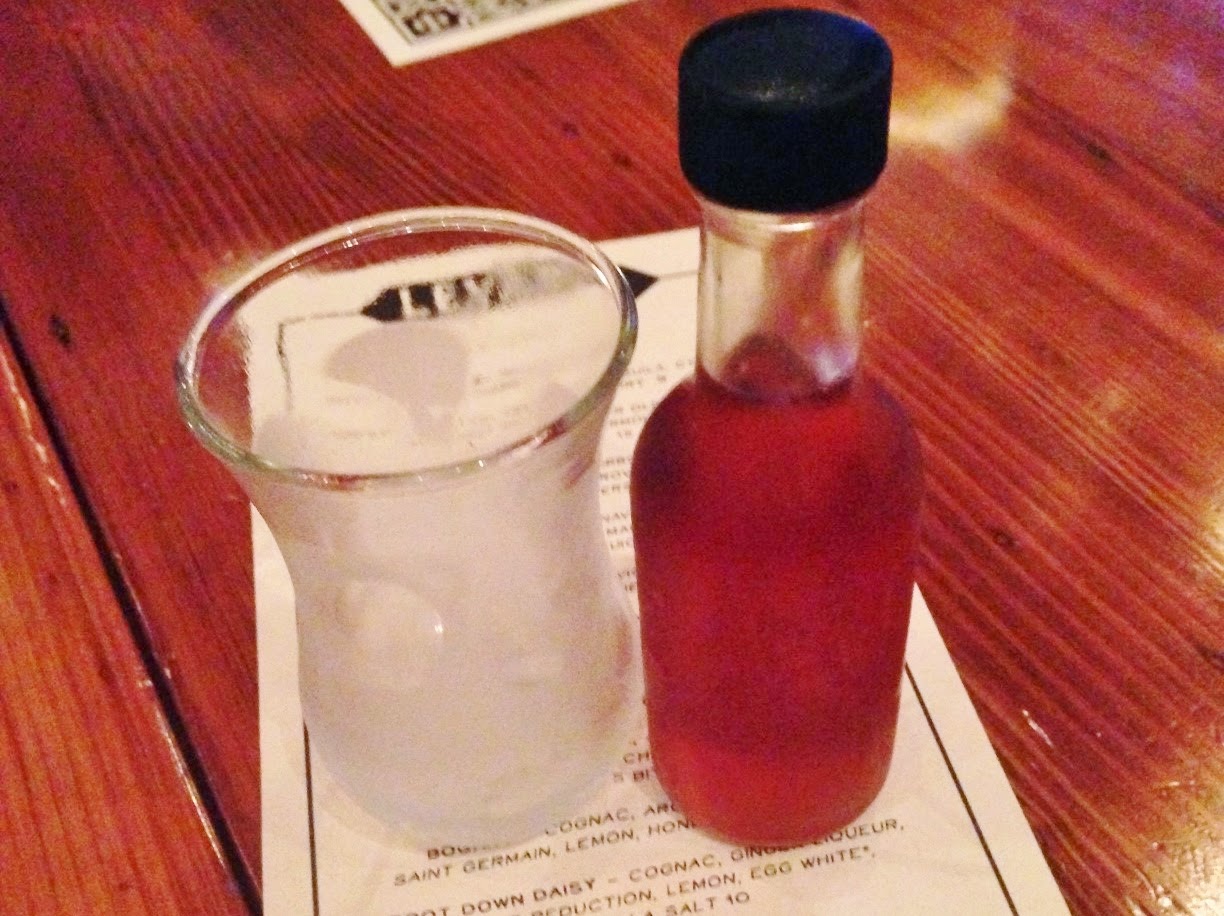 I went for the Autumn Piper ($9) with Indonesian long pepper-infused cachaca, Fernet Vallet, Cherry Herring, and orange Juice. I loved the combination of flavors here. Complex but oddly refreshing. I thought our waiter was crazy when he compared it to a well-made, alcoholic Coke, but he was right. 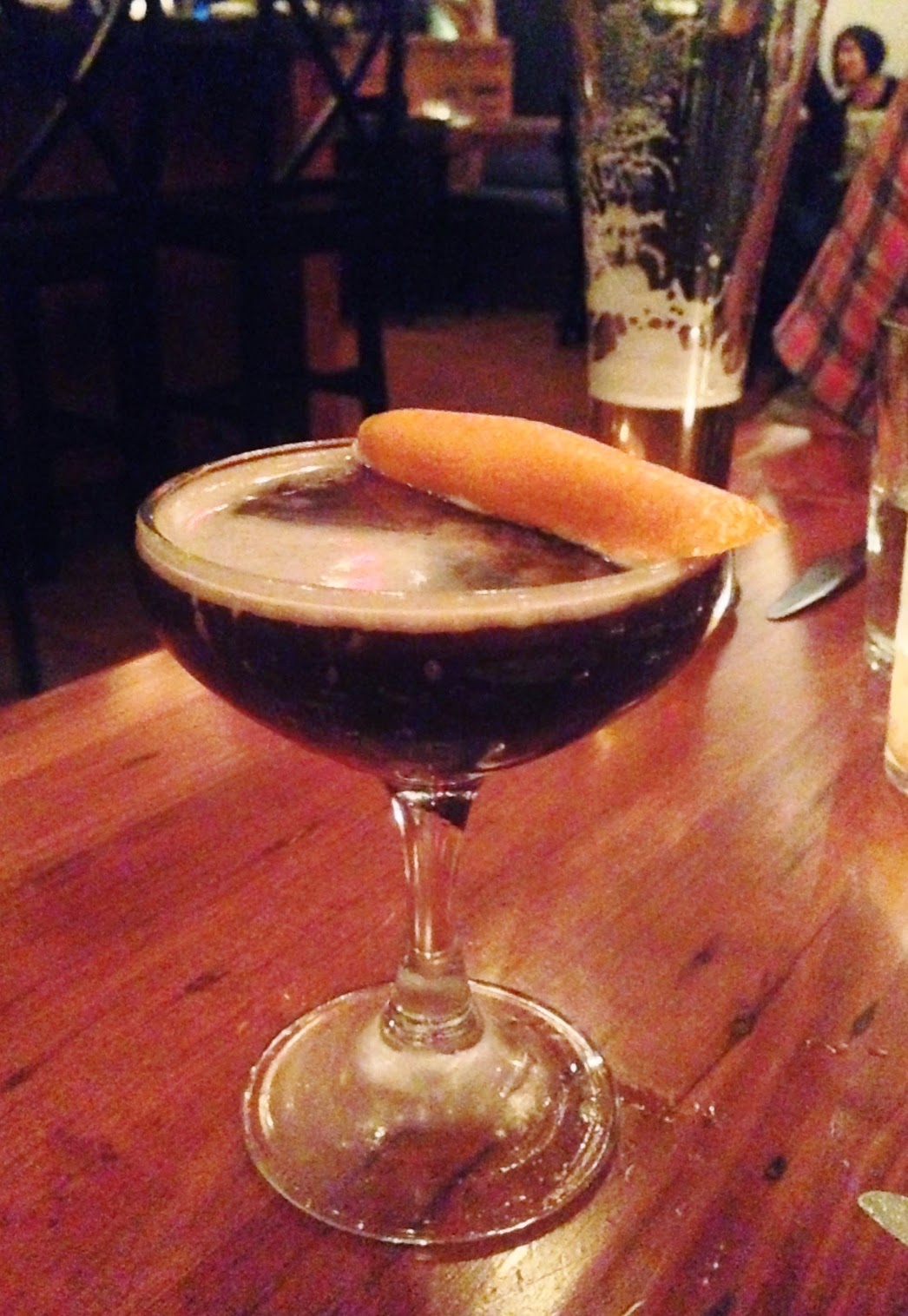 Obviously the four of us needed more food, so we ordered the Grilled Beef Kofta ($10) with herb relish, pine nuts, barberries, and sumac yogurt. These were okay, but certainly not the most exciting dish as they were essentially fancied up beef patties. 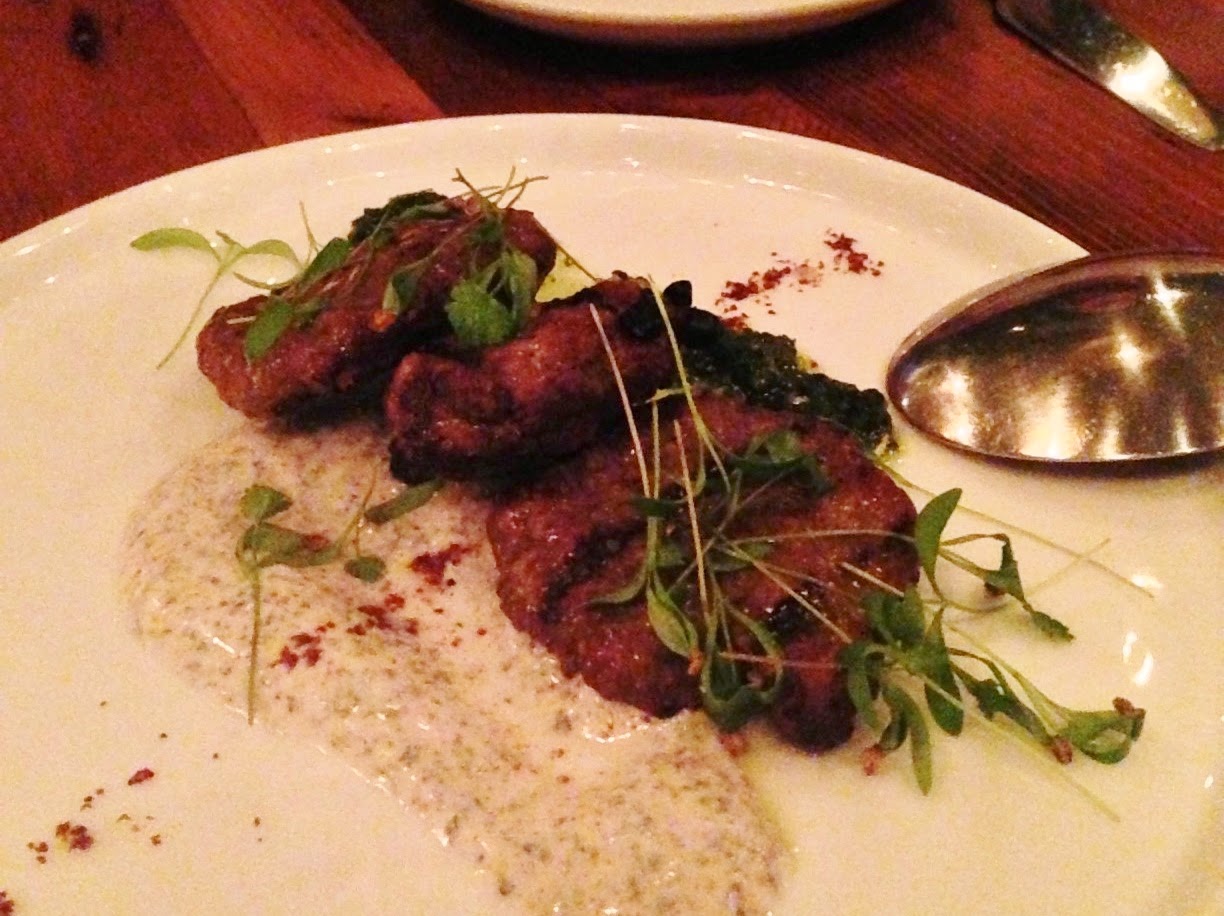 We also shared the Fish of the Day and Spanakopita with nettles per our waiter's suggestions. Both were good, but not especially memorable. 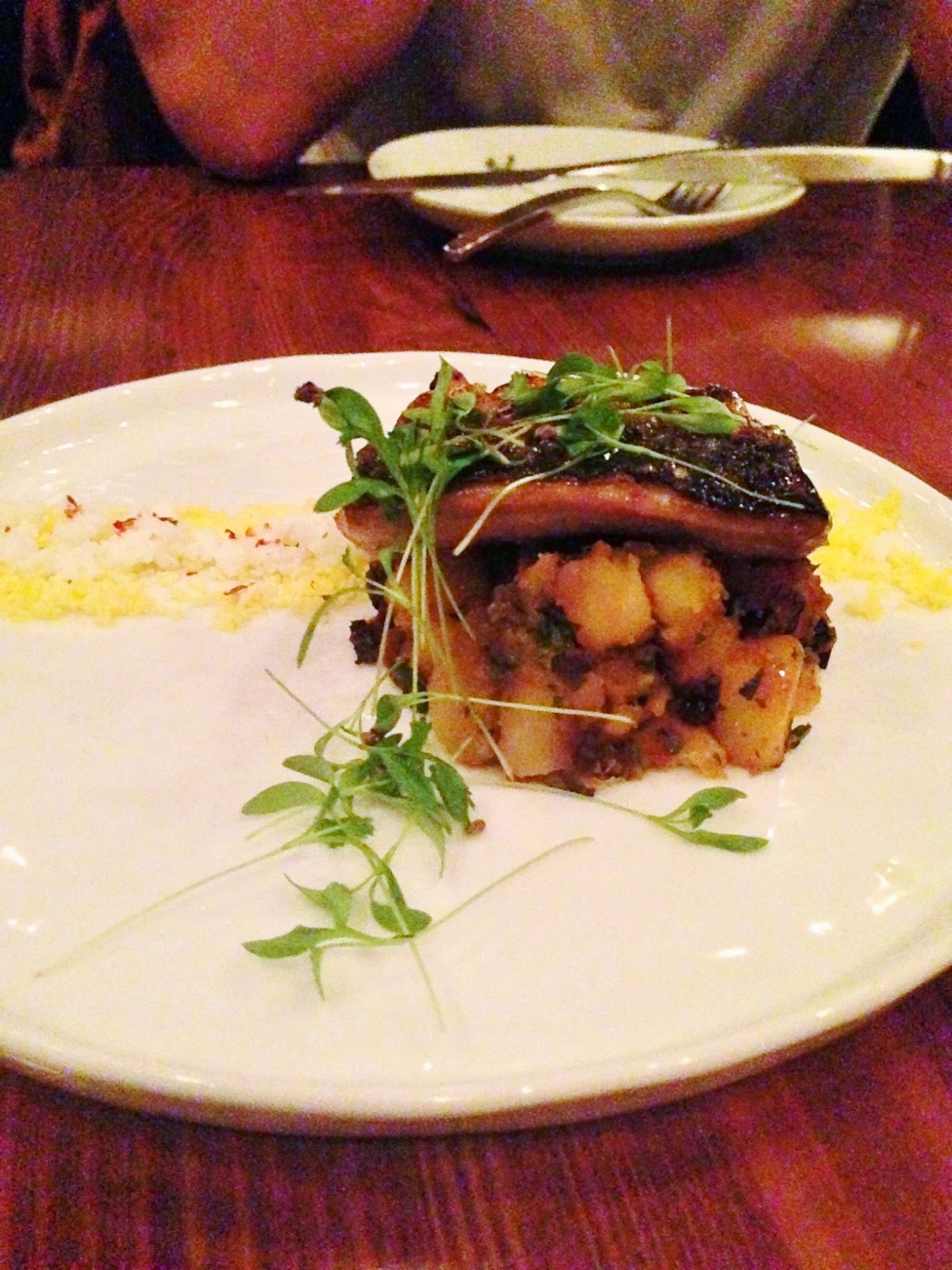 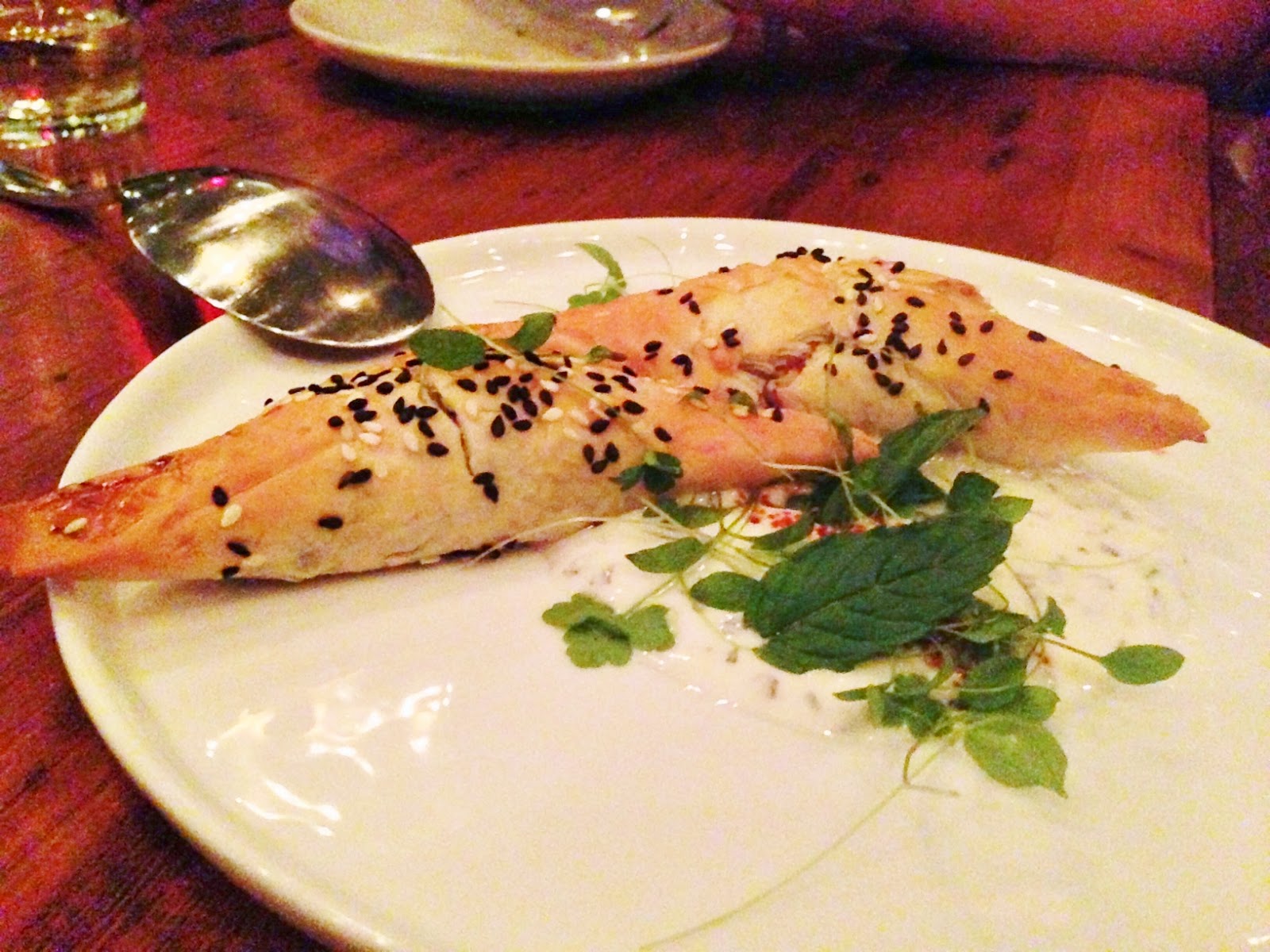 Following dinner, we all were left feeling sort of blah about the whole thing, and maybe a little hungry too. Looking back, I think that the pricy bill may have tipped our opinion in the wrong direction because there were some great aspects to our meal. The attention to detail paid to the drinks was excellent and the hummus and spiced lamb is one of my favorite dishes I've eaten in a while (not counting the mushrooms at The America Local because you know Kel and I are in love with those.)

I think we made a mistake too in not ordering any dessert, which Levant is well known for. Too bad my three dining companions "aren't sweets people." Ugh.

To sum it up, it's not that our experience at Levant was bad, it's just that it wasn't good enough to make us feel okay with the amount of money we were spending. At those prices and portions it needed to be so unique, so awesome, that we forgot about the expense. Maybe, if we were a big group with lots of money and could order a couple of everything to share, it would have been a fun experience. But with our small group of four trying to keep the tab under $150, it didn't live up to our expectations.