Two weekends ago, Doug and I flew to the Bay Area for the San Francisco Rock n Roll Half Marathon. It was our third half marathon but definitely more challenging than the Portland or Seattle halfs we had run previously thanks to all those SF hills. Of course, we rewarded ourselves for our efforts with lots and lots of good food and drinks. Here are some of our favorite stops from our trip: 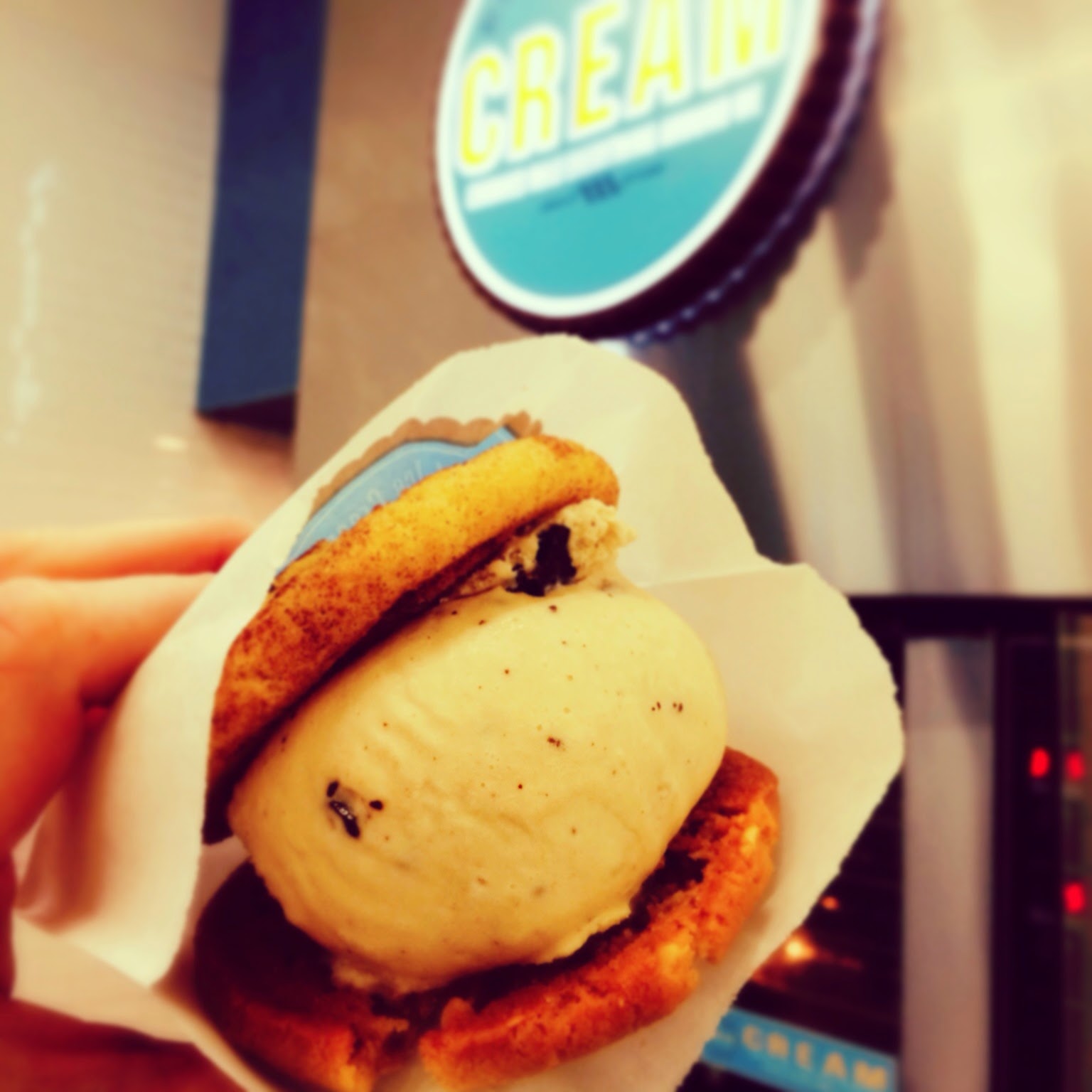 Lauren and Kyle graciously played host to us for the weekend. After a tasty dinner at Tacolicious in Palo Alto on Friday night, Lauren suggested we get some dessert at Cream, a custom ice cream sandwich shop.

Cream offers a menu of 20 ice cream flavors and 10 cookie options. You can pick two different cookie flavors for your ice cream sandwich, or you can diverge from the ice cream sandwich thing and get a milkshake, malt, float, or just plain ice cream or a cookie.

We all agreed that these messy, melty sugar bombs were quite delicious but very filling. 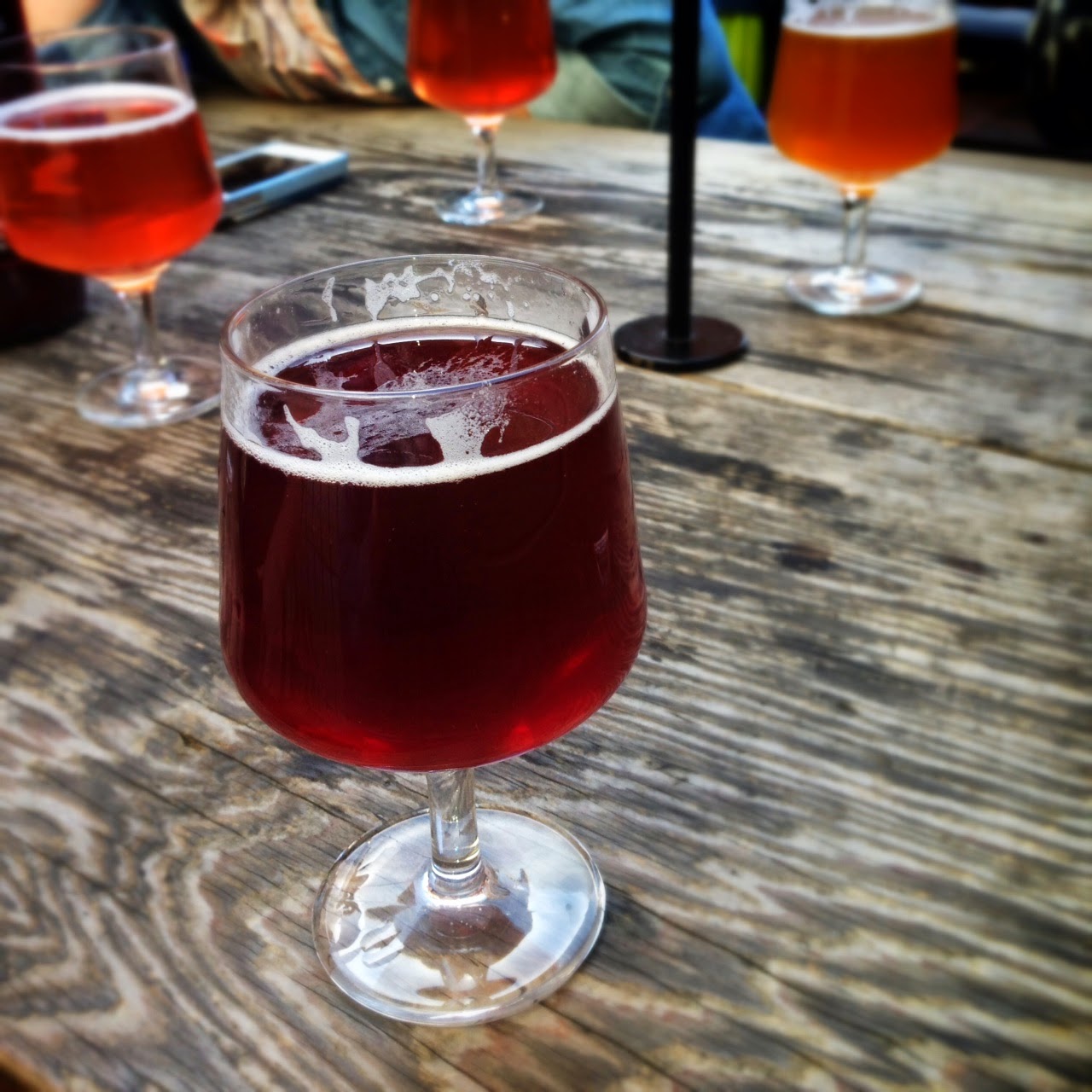 Lauren, Sarah, Doug, and I headed to Oakland to watch the Mariner's beat the A's (yeah, that win was unexpected) on Saturday afternoon before moving on to The Trappist, a Belgian beer bar in the Old Oakland neighborhood.

The Trappist has over 20 beers on tap as well as several bottles and some food offerings. Lauren and I both sampled some beers from Mikkeller's Spontaneous Series. The series features oak-aged lambic beers with various fruit additions. Lauren opted for the Mikkeller Spontanpeach while I chose the Mikkeller Spontancassis. Both were very good and, as we would find out the next day, a very good deal considering the price of Mikkeller bottles.We also liked the nice little patio out back. 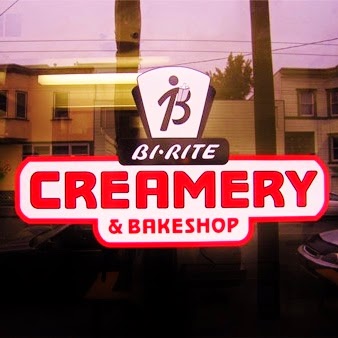 After a two-hour drive back over the Bay Bridge (yep, you read that right... so much traffic), we were more than ready for dinner. We did some carbo-loading at Zero Zero before making a quick stop for dessert at Bi-Rite before heading back to Palo Alto.

I opted for their take on salted caramel (it had a much darker caramel flavor than any salted caramel ice cream I've had before) and ricanelas (cinnamon with snickerdoodles). The ricanelas was so, so good as was Doug's pick of malted vanilla with peanut brittle and milk chocolate pieces. Plus, while I'll give it to Salt & Straw that their line does move relatively fast, Bi-Rite really has their ish together. We breezed though their block-long line in under 10 minutes. 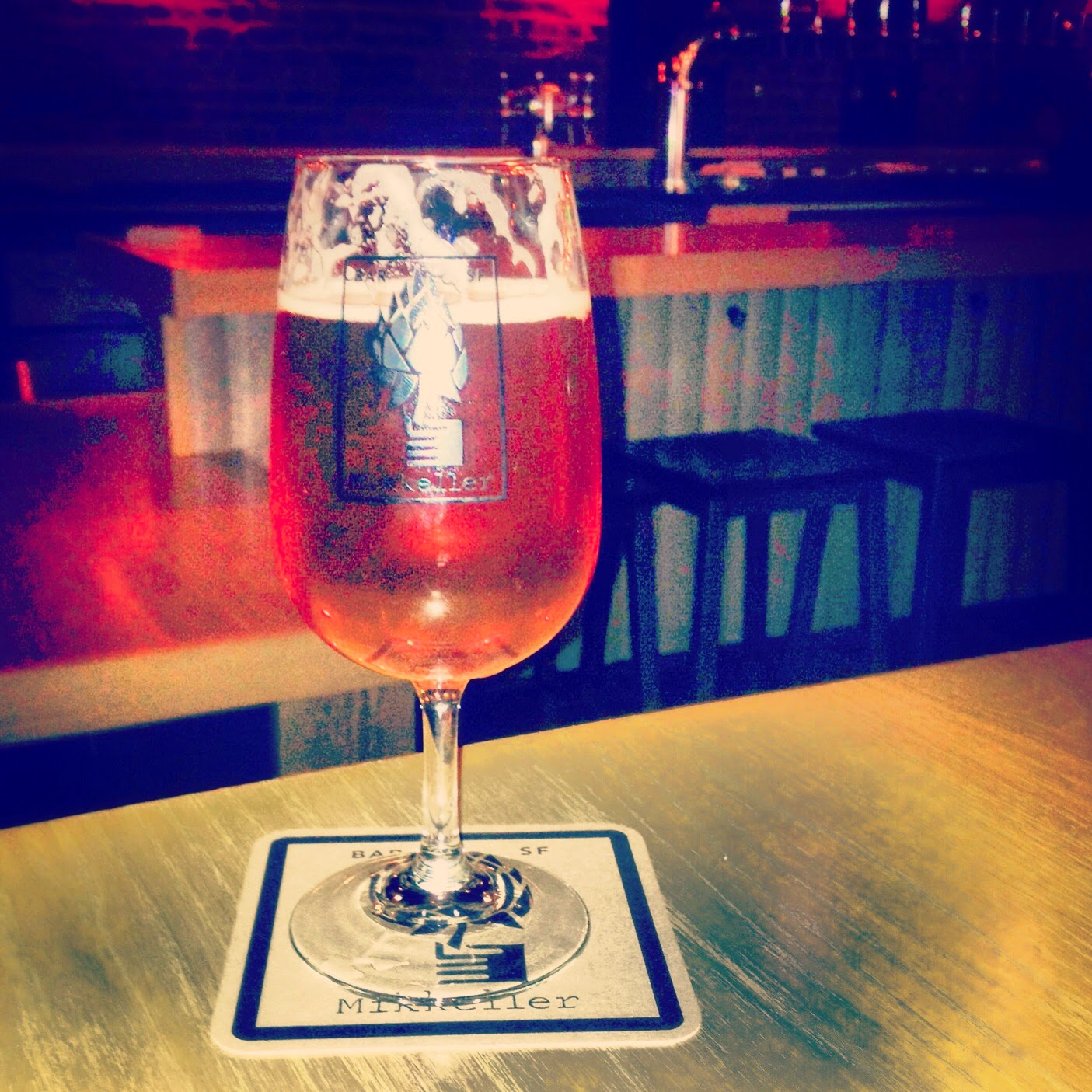 Doug did quite a bit of research before our trip and was adamant that we stop by Mikkeller Bar after the half despite the less than ideal parking situation. Maybe we were all still feeling the affects of those running endorphins, but seriously, all the beers that we tried here were excellent. Every single one.

Mikkeller obviously puts a lot of care into the selection of their beers and the way they serve them too. The menu is divided by what temperature the beer is served at: 40o, 45o or 55o.

One caveat: we found out the hard way that the Mikkeller Spontaneous Series bottles on the menu are only 11oz (maybe the menu mentioned that, but we didn't notice)- so yes, that $25 price tag is a bit exorbitant, though Lauren's Mikkeller Spontanmandarin was really good.

(Also, you should definitely read this NYT Magazine piece about the founder of Mikkeller and his twin brother who owns another of our favorite breweries, Evil Twin Brewing. Interesting stuff!) 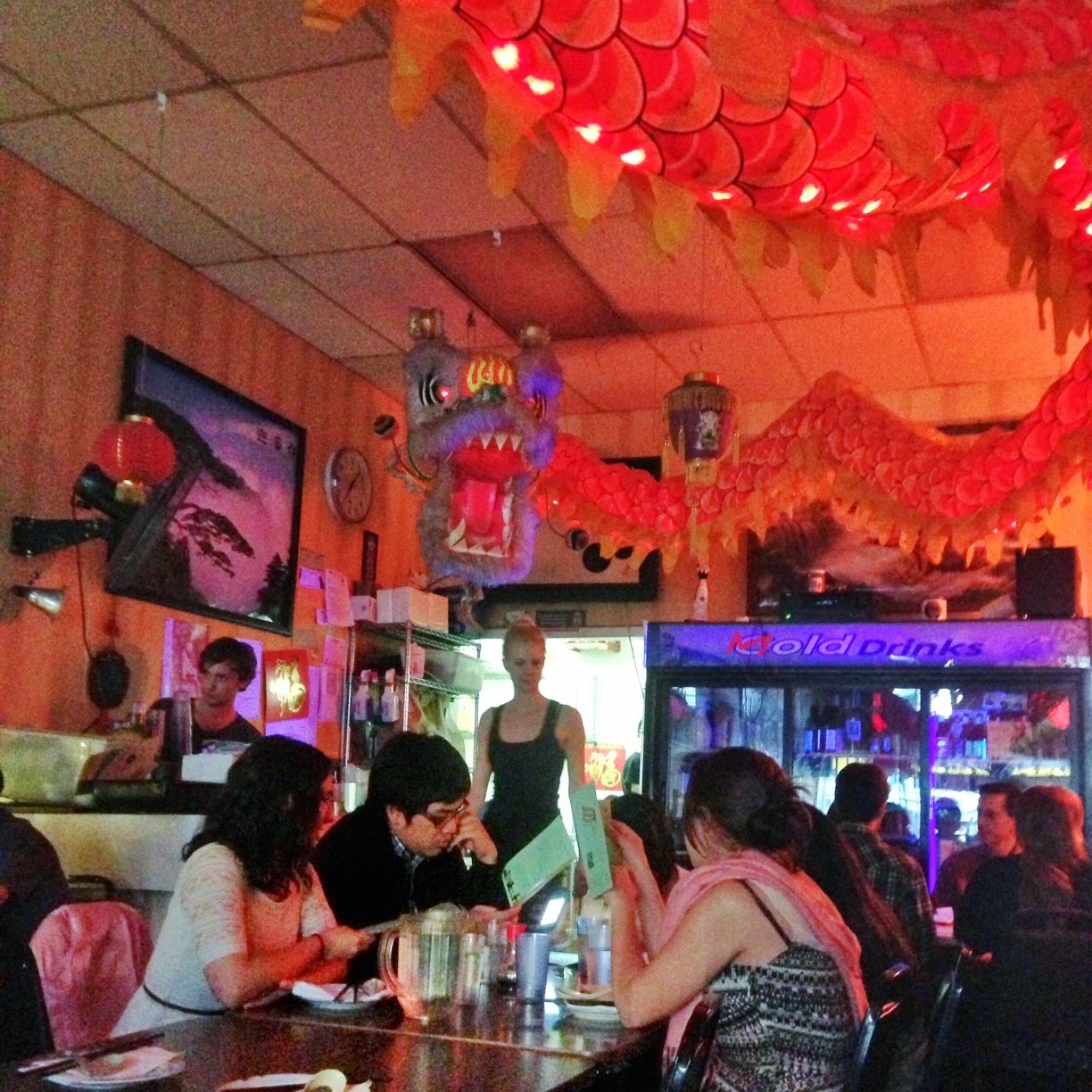 After finishing our beers at Mikkeller, Sarah, Doug, Lauren, Kyle, and I all wanted to grab dinner in the city before Doug and I had to catch our flight back to Portland. After much deliberation, we reluctantly decided to head to the Mission for burritos (Lauren was hoping to take us somewhere with a little more hip factor). But, as luck would have it, we happened to pass by Mission Chinese Food on our way to burritos and saw that there was no line and no one on the waitlist. Whaaaat??? Usually Mission Chinese has a 1-2 hour wait so this was a big deal. Obviously burritos were no longer happening.

Some quick online research gave us an idea of what to order. Here are our favorite dishes from most-loved to liked-a-lot.

Stir-fired Pork Jowl with crunchy radish, radish greens, chicharrones, and shiso.The radish greens were my favorite part of this dish as they soaked up all the delicious sauce and were super tangy and flavorful. 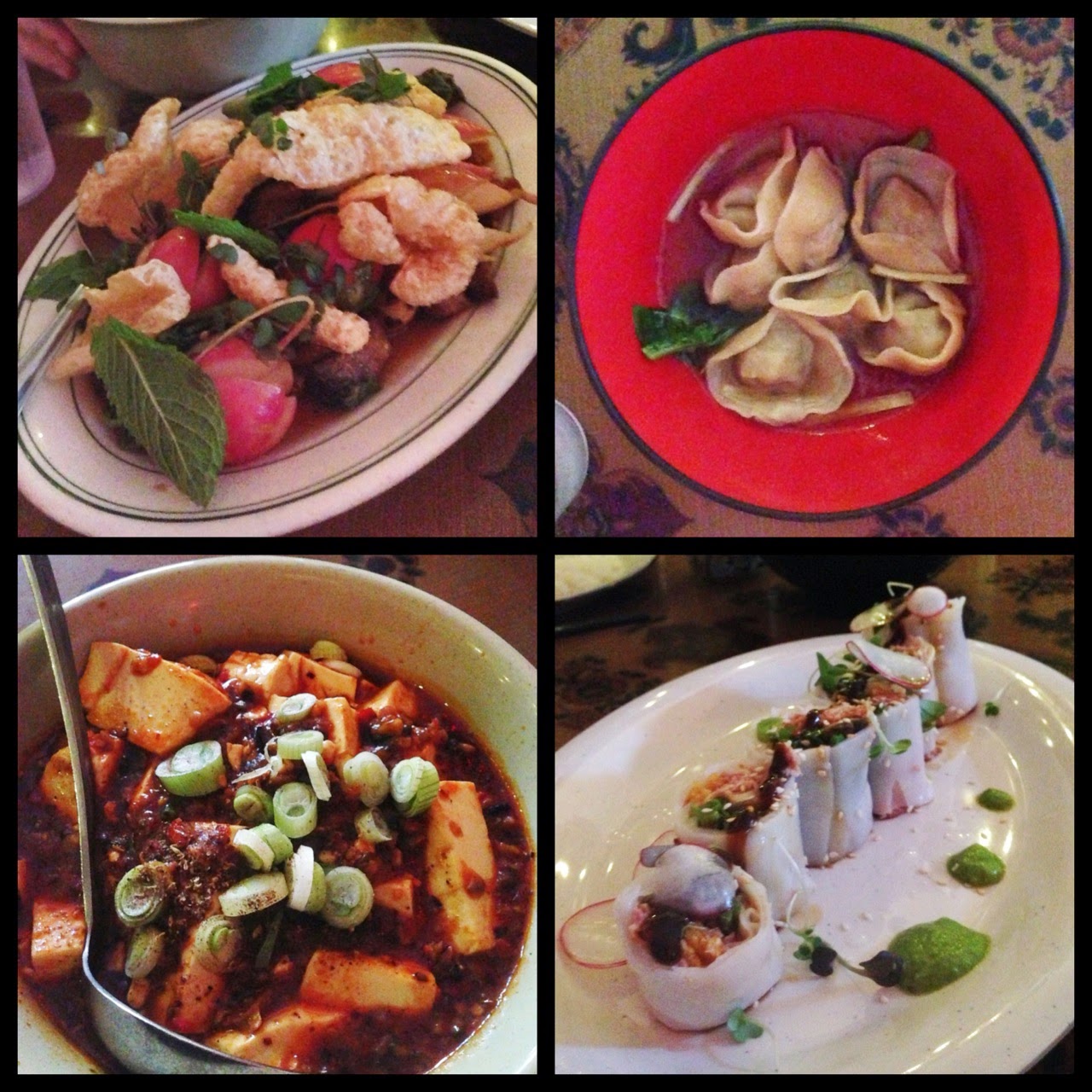 Squid Ink Noodles with something or other (sorry, the online menu doesn't have a description of these).

Ma Po Tofu with braised shiitakes, aged chili paste, sichuan peppers, and scallions. This was incredibly spicy. Perfect for Lauren, but the rest of us stayed away.


Thanks Lauren, Kyle, and Sarah for a great weekend! We'll be back soon!