Portland Bars: The Old Gold and The Box Social

When we decided to find a place together in NW, Doug and I promised ourselves we wouldn't become those people. You know, the people who don't venture across Burnside and would certainly never find themselves on the other side of the river, especially on a weeknight.

But, slowly but surely, we kind of have become those people. Especially now that summer is finally here, it's so nice to just walk somewhere instead of drive.

Good thing Portland Monthly just published an article about Portland's Best New Bars. Finally, some inspiration to get us out of our happy, if not somewhat boring, NW rut!

We had already tried many of their recommendations (Kask, Rum Club, Barwares, Dig A Pony) but the promise of a nice patio at The Old Gold caught our eye.

What: The Old Gold
Where: 2105 N Killingsworth st
Honeys Heart: The patio

I don't know when this happened, but N Killingsworth, like the part right by Beaterville (perennial UP breakfast favorite), got really nice all of a sudden. There's all kinds of bars and restaurants and little boutiques. I didn't quite believe that Beaterville hadn't up and changed locations when we first drove by.

Anyway, The Old Gold is one of those recent additions. They have a great mix of craft cocktails and local taps, and their patio is one of the nicer I've seen in Portland. And it's dog-friendly.

I ordered The Sweet Science, made with gin, grapefruit juice, grapefruit bitters, and lime. 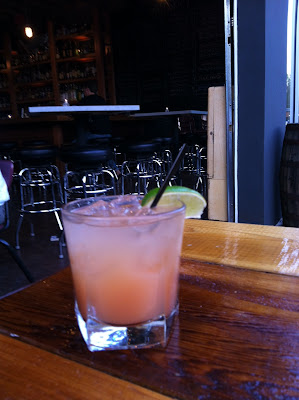 Doug had The Angie, made with WhipperSnapper whiskey (Doug's new favorite), grated ginger, and ginger beer. 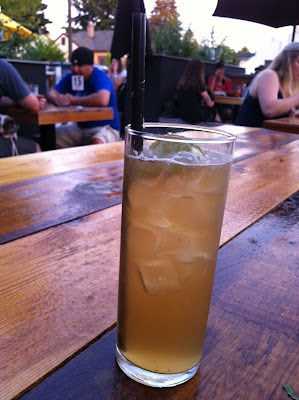 And then we shared a O.G. Mule, made with vodka, lime juice, fresh mint, and kombucha.

We both liked the O.G. Mule the best, but all three drinks rank pretty high on our list of "best drinks in Portland."

We didn't get any food, but it all looked pretty tasty so I wouldn't mind going back for happy hour or dinner next time, instead of just getting drinks.

Happy hour is Mon-Fri from 4-7pm with $1 off well drinks, house wine, micro brews, and sandwiches.

We weren't quite ready to head home yet, so we decided to head over to another of Portland Monthly's recommendations: The Box Social.

I had been once before with Allison for an early happy hour and while it was nice, I got the feeling that The Box Social really shines after dark. It does call itself a "drinking parlour" after all.

I was right. The mood is much cozier and romantic at night. 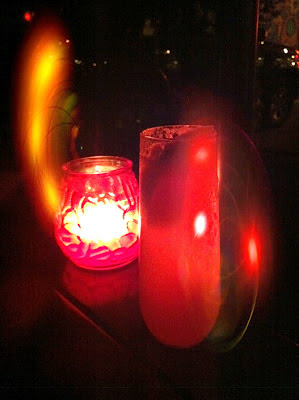 I do like a cocktail that's a bit challenging- complex flavors and all that. But sometimes it's nice to drink something that's just plain delicious with no complications. That's what the Sparkle Pony was. Fruity and bubbly, I could have downed quite a few of those, no problem. Also, the name is awesome. I'll be back for more of these I'm sure.

Doug tried For You, Vermont. Would love to tell you what's in it, but The Box Social's website is down. We know it had maple syrup in it (hence the name) and that it was tasty.