Warning! The pictures in this post are of very low quality. They do not reflect the food, which was actually of very high quality...Damn iPhone messes up EVERYTHING

The South End is my new favorite neighborhood in Boston (sorry Brookline). Yeah, it's at least 45 minutes away from my apartment, but I love the rows and rows of red brick buildings and there are so many great (albeit expensive) restaurants.

When I was figuring out where I wanted to take my parents during their visit, the South End was first on my list because I thought my mom and sister would enjoy walking around the neighborhood as much as I do. I also wanted to take my family out for tapas to give them a taste of the food I enjoyed while in Barcelona. And so, Toro seemed the ideal spot.

Toro serves Barcelona-style tapas and was Ken Oringer's newest restaurant until Coppa opened last summer. My research suggested that there would be quite a wait when we got there, even if we did go on a weeknight, so we were happy to find that we could be seated immediately on arrival. 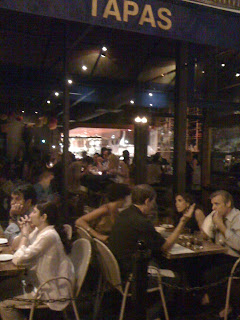 Toro has a long bar as well as a communal table that runs down the center of the restaurant. Everyone's kind of crammed together, but I liked the cozy and slightly raucous atmosphere that the closeness created. We were seated in between some douchey undergrads recently back from their own European adventure ("Dude, Amsterdam was like so crazy") and a group of thirty-somethings enjoying just as many drinks as they did tapas.

My dad happily opted for a local beer but my mom, who has recently discovered sangria, was disappointed to see that her new favorite drink was not on the menu. After I explained that sangria is not really Spanish, she decided to order a more traditional wine spritzer made from wine and Sprite. To her chagrin, it tasted just as you might suspect: wine watered down with Sprite. Guessing she won't order that again...

Our server (adding to the authentic Spanish experience with her thick accent) advised us that 2 to 3 dishes per person was a good guide for ordering. That seemed like a little much for us, so we decided to start with 6 plates and order more as we went along if needed.

First out was the crusty bread topped with tomatoes and olive oil, called Pan con Tomate ($4) at Toro but known as pa amb tomaquet in Barcelona. 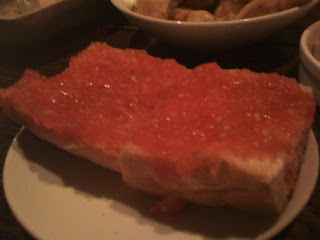 I had raved about having it in Spain. Unfortunately, Toro's version was less impressive. Not particularly flavorful even though it was topped with a lot more tomatoes than then bread in Spain had been. Cross that one off the list for next time.

Next came the Patatas Bravas ($5), fried potatoes with alioli and spicy tomato sauce. Nothing fancy really, but quite tasty, especially when dipped in the sauces they came with. And a good pick to have made as Toro was quite generous with their serving and the potatoes were to make up most of my sister's meal (she doesn't do meat or fish, except for the occasional hot dog). 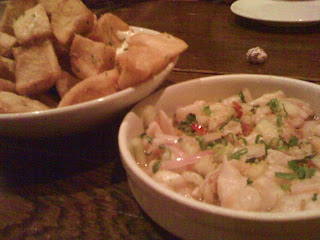 Up next was the Ceviche (which annoyingly, I can't find on the online menu). This was by far the favorite of the night. The ceviche was refreshing with the perfect amount of sweetness that none of us had expected. A must-order for my next visit (if they still have it).
We also had an order of the Gambas Al Ajillo ($12), griddled garlic shrimp. Sorry, super blurry photo: 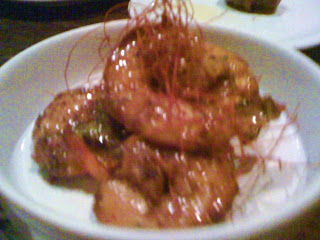 My mom loves shrimp in any form, but my dad and I agreed that the shrimp was far too salty to be enjoyable. When eaten atop a piece of the crusty bread from the constantly-refilled basket on our table, they were more edible, but I would not order them again.

The Datiles con Jamon ($6), dates stuffed with blue cheese and almonds and wrapped in jamon, were a rich addition to our table. My dad and I loved the combination of the sweet dates, salty jamon, and the bite of the blue cheese. 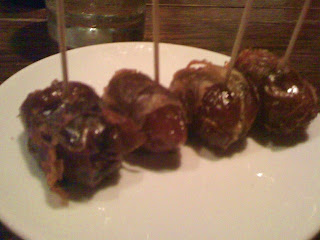 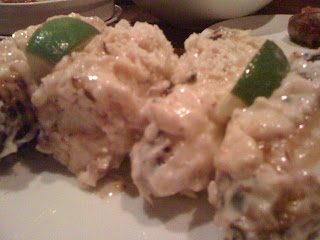 Our neighbors on both sides ordered the corn as well and when it arrived, we all snuck glances at each other in attempt to figure out how to go about eating it. My family dug in first, eating the corn with our hands. Some of our neighbors followed our lead while others tried to cut their corn off the cobs with their knives. That didn't really work for them. Guess the hand method was the way to go.

The corn was certainly tasty, but loaded with gobs and gobs of alioli. I think it would have been just as enjoyable if Toro has been less liberal with their spread. And while I had no qualms about getting a little messy with my family, this would not be the dish to order if you were on a first date. (Unless you're sure your dining partner would find a mayo-smeared face and teeth lodged with corn endearing...)
Overall, my family and I very much enjoyed our meal at Toro. It was fun to have so many different dishes to try and discuss, and while I was worried that our dinner would be a little pricey, our total bill turned out to be less than some of the others that we would rack up during their visit.
To make it easy, here's the order my dad and I rated our dishes at Toro, with the #1 spot being the most enjoyable. (Mom and Sis would have rated them differently, but majority rules.)