I was in Portland for a former roommate's wedding (Ahhhh! I feel old) and so were most of my good friends from college, including the BF and my friend Doug. Doug lives in Seattle so Nick and I drove back up with him to spend a few days in the "Emerald City."

Seattle and I have a bit of a rocky relationship. My first taste of the city was on a family trip when I was about 12. If San Jose had any sort of "alternative culture" at that time, my sister and I certainly hadn't been exposed to it, so Seattle's many wacky residents came as a bit of a surprise. My sis and I christened them "SPOS": Scary People of Seattle.

And 10 years later, there are still plenty of SPOS running around Seattle. Most of them are more entertaining than scary (oh hey, person in oddly fitting bike shorts who flipped us for no reason), but some are actually pretty sketch (looking at you, potential pick-pocket).

But despite the SPOS thing, I've come to see that Seattle is actually a pretty cool place. And they loooove happy hours there. Perfect!

We started our visit with a Mariner's game. They won! (Surprisingly) 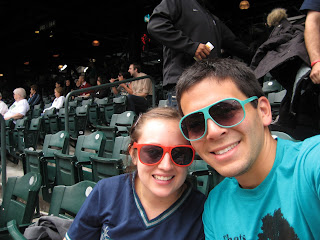 Note Doug's bright green Sounder's jersey. That's because he was going to the soccer game later that night. Before a soccer game it's important to 1) eat some food so you have lots of energy to sing songs and do cheers and 2) drink beer because singing songs and doing cheers is way more fun when you're tipsy.

Check out the fish n' chips; they were voted "Best in Town" (by who, not quite sure...) 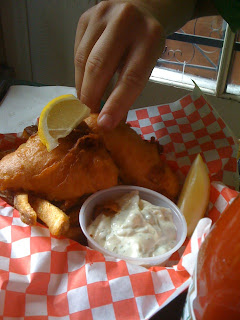 Our 2nd happy hour of the trip was a quick one. We stopped at Elliot Bay Brewing Company in Burien on our way to the airport. 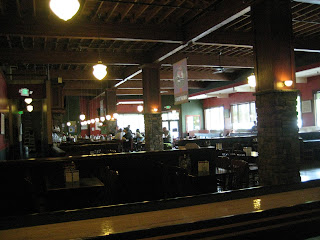 Elliot Bay is fun because not only do they have a pretty good happy hour and lots of craft beers on tap (some brewed on location), they also have shuffle board. 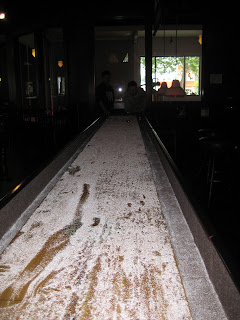 While we played a game, the boys took advantage of all the craft beers and I tried the apple cider mixed with the strawberry beer. My pick is not recommended.

For food, we ordered the waffle fries topped with chili and the pulled pork quesadilla. They were both pretty decent, though the fries got a little soggy toward the end. 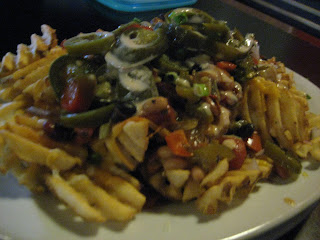 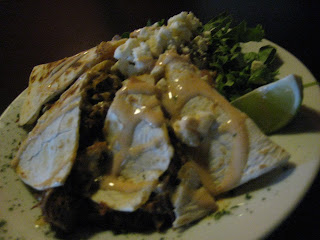 Doug told me that Owl N' Thistle and Elliot Bay are just two of the many happy hours that he frequents in Seattle. In fact, he claims to hit up one favorite hh and one new hh almost every week. So jealous!! Crossing my fingers that Boston will one day see the light...
Posted by Kelly at 2:37 PM