For years Romo's on SE Hawthorne was one of my grandparents favorite spots. I went there multiple times with them and always enjoyed their food, but unfortunately was too young to drink the margaritas. Romo's moved over to 7915 SE Stark about a year ago and was renamed Romo's Latin Quarter. We have attempted to stop in for lunch or dinner on multiple occasions but there has always been a "Closed" sign on the door. This is probably our fault due to our lack of research on Romo's limited dinner only hours (5-9pm, weekends til 10pm), closed Mondays. As a consequence of our lack of timing it has been a while since I've been Romo's so when they asked happy hour honeys to come by and let them know what we thought I was excited to finally go! 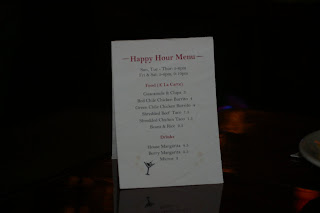 I showed up at 5pm with that nights happy hour accomplice Adam, just as Romo's was opening, to be sure to have the full hour to take advantage of the happy hour menu that ends at 6. I ordered a house margarita ($4.50) and Adam ordered the berry margarita ($5.50)...which happened to be strawberry that day, Adam's favorite! We sipped on these while enjoying complimentary chips and salsa, and deciding what we should share from the food menu. The margaritas are great, strong, and good sized, made with a secret recipe that they won't give away! I asked as we were leaving what they make them with, but the waitress wasn't about to give me any hints. They are more of a classic margarita than the one at Elephants made with fresh lime, lemon, and orange juice that I love, but they hit the spot in a different way and I would definitely recommend getting one (or two)! 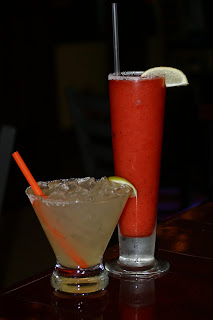 The happy hour menu isn't very big and doesn't have some of my favorite things like chimichangas, fajita, or any kind of Romo's special which is kind of a bummer, but the basics are always good too. We decided to order the Green Chile Chicken Burrito ($4), the Chips and Guacamole ($3), a Shredded Beef Taco and a Chicken Taco ($1.50) to share....so basically one of every thing! 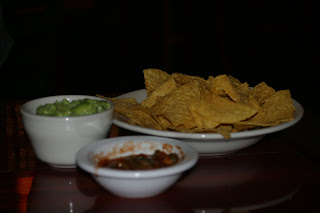 Our favorites were probably the guacamole and the green chile chicken burrito. The guac tasted fresh and the green sauce was spicy but not overwhelming. 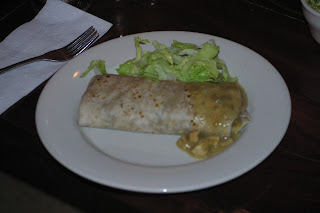 Both tacos were good, but kind of dry and lacking any type of sauce or real flavor. I will probably return, but unless the happy hour is spruced up I'd probably skip it for something off their regular menu, except the margaritas. I'll gladly enjoy a couple of those! 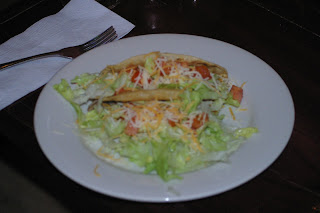 Bonus: Romo's was offering a complimentary Chocolate Nutty Mousse Cake last week if you asked for...so of course we did. It was pretty delicious, but Adam ate most of it while I enjoyed another margarita. Be sure to check out Romo's website or twitter for the special they're offering that week! 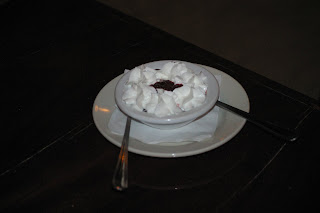