Let me start off by saying that if you don't know about Groupon yet, you should probably get acquainted with it asap.

Groupon is a website that uses "collective buying power" to provide its customers with great deals on everything from dinner at a local restaurant to massages at the hippest salon in town. Sounds great right? And it's super easy to use. Every day, Groupon posts a new deal. For example, today's deal in Boston was $15 for $35 worth of Indian Food at Kashmir. Each deal has a minimum amount of people who must buy the coupon in order for the deal to be on. So for today, 150 people had to buy the groupon before it went into effect. If your Groupon deal is on, then Groupon emails you instructions for how to redeem your coupon and you're done.

I first heard about Groupon from my friend Sara, who emailed me that Groupon was offering %50 off tickets to see the Boston Ballet's Nutcracker. So down for that...and luckily so was my roommate Shannon.

We bought that Groupon back in October, so by the time December rolled around, we were both really excited to go to the ballet (note our fancy outfits). 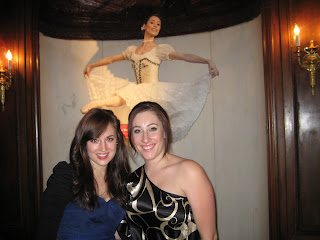 The Nutcracker is performed at the Boston Opera House which is just beautiful. 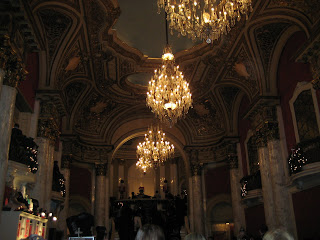 And Shannon and I were surprised to find out that we had really good seats. 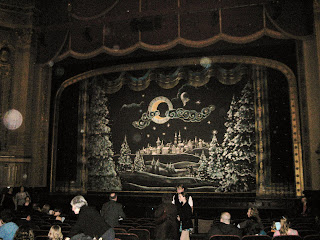 Or so we thought...The couple behind us was noticeably tipsy and talked loudly throughout the First Act despite the fact that everyone around them (myself included) kept turning to flash them dirty looks every few minutes. When that was obviously not working, the guy next me politely asked them if they could stop talking until intermission. Well, that just set them off, and the tipsy man leaned over and loudly said "fuck you" while flipping the guy next to me the bird.

Um, hi. Are we at a football game or the ballet?!? Too bad bad the Opera House doesn't have an obnoxious fan hotline like they do at football stadiums...

Thankfully, the noisy couple did not return after intermission and other than that little distraction, I really enjoyed the Boston Ballet's take on the Nutcracker. I have only ever seen the San Francisco Ballet's version but I really like how the Boston Ballet incorporated so many of their students into the performance. I wish I had a video to show you of the little kid who played the black sheep in the pastoral scene. Beyond adorable.

Since we were all dressed up in our Nutcracker finery, Shannon and I decided to make a night of it and hit the town when the show was over.

happy hour honeys hint: if you're already out and about and don't have access to internet to look up where to go, hit up the concierge stand at a nearby hotel. Act like you're a paying guest and you'll be treated to all the free info you want!

The concierge at the Westin recommend that Shannon and I try the Back Bay Hotel (formerly Jurys Boston Hotel) if we were looking for a classy bar with good drinks and yummy appetizers. The Irish bar at Back Bay is called Cuffs and the place was packed with a late-20s-and-over crowd. Shannon and I were a bit disappointed to find that most of the drinks on the menu were at least $13, which seemed like a lot when all the menu items were $11+ too. We decided to split the flatbread margarita pizza for $11 and Shannon got a beer ($6) and I got a glass of Riesling ($9). The pizza was totally bland and to be honest, I'm always happier with a cocktail in hand rather than wine, so Cuffs was really not doing it for us.

The concierge had also recommend Post 390, which was right down the street, so we headed there next. Having only opened its doors in early October, Post is apparantly one of the new hotspots in town. Like Cuffs, it definitely had an older vibe (right when we walked in, I heard a women bragging about being a cougar...), and it was way more packed than Cuffs.

After wrangling at seat at the bar, Shannon and I both opted for a No. 39 ($11) with Milagro Silver Tequila, Cointreau, fresh grapefruit juice and house smoked sea salt. 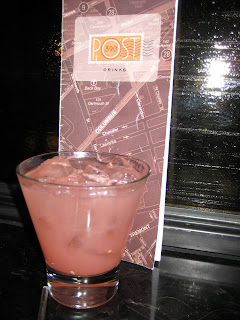 Now, if you know Kel and me, or if you read our blog often, you know we are avid followers of the school of if you order it, you finish it. No matter how much it tastes like shampoo (shout out to Teardrop Lounge in Portland!).

Well, I just could not finish my No. 39. The smoked sea salt completely overpowered the other components of the drink and I could only get down about half of my drink before I decided it wasn't worth it.

But since the No. 39 was the only drink Shannon and I tried at Post, I can't write the place off completely. But if I do go back again, I will definitely be ordering something else!
Posted by Kelly at 6:28 PM