Well folks, I think 2015 was finally the year that we reached Maximum Pumpkin Beer.

At this year's 4th Annual Pumpkin Beer Tasting, our group of 25 tasted 31 different pumpkin beers and ciders. That's roughly the equivalent of 13 growlers or 3/5th of a keg. In layman's terms: a shit ton

In addition to adding 7 more beers to our lineup (read about our 2014 list here), we also switched things up a bit by going with a Dia de Los Muertos theme. I really wish we had some extra time to pick up some sugar skulls to really complete the look, but the food and decor came together pretty nicely otherwise. 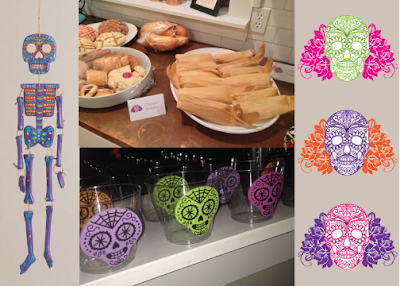 Menu
Decor
As for this year's pumpkin beer winners, Eylsian still managed to keep a few beers in the Top 5, but we did see two new breweries make it into the winner's circle. The trend here, with the exception of Eylsian's Night Owl, is that all our winning beers (and the cider) were something different than just your typical over-spiced, too-sweet pumpkin beer. Take note, brewers!

This cider is up from 4th place last year and even though it's not technically a pumpkin beer, we're okay with it taking first place because it really is delicious. This cider is fermented with cinnamon, nutmeg, allspice, and cloves, giving it a delicious, subtle pumpkin-pie vibe.

This pumpkin beer was new to the line-up this year and I can find almost nothing about it online except for that most people who have tried it agree that it's a Belgian and it's not your typical pumpkin ale. I think our crew liked this one so much because it tasted the most like a normal beer, aka no overwhelming spices or sweetness.

Night Owl dropped down one spot from its #2 finish last year, but as this beer has always made it into our top three, it think it's safe to say that Night Owl epitomizes what a pumpkin beer should be. It's brewed with 7.5 pounds of pumpkin per barrel and spiced in conditioning with ginger, cinnamon, nutmeg, cloves and allspice. 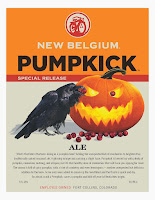 This beer was also new to our tasting this year and stands out due to the "kick" of cranberry juice and lemon juice that New Belgium adds to its traditionally spiced ale.

Punkuccio fell from its #1 spot last year, but still finished strong in 5th place. This ale is made with Stumptown coffee plus cinnamon and nutmeg and while it was the darkest beer we tried, it's very balanced compared to most of the other pumpkin ales.