One of the things that Nick was most excited about when we started planning our trip Austin was the promise of great BBQ. After much research on his part (and none on mine), we decided that Franklin BBQ was a must-try and reserved Saturday morning for camping out in the Franklin line.

Here's how it works at Franklin BBQ: Wednesday through Sunday, Franklin starts serving food at 11am and keeps on serving until they run out of BBQ. 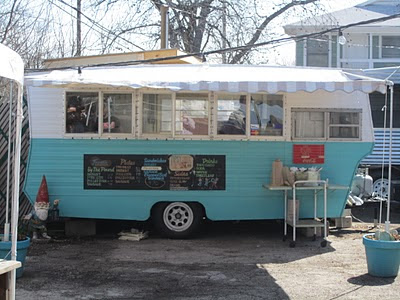 Nick and I wandered up to the parking lot that houses the Franklin trailers at about 10:15am on Saturday to find a line waiting for us. (Note: Franklin has since moved locations; the address above is the new one.) 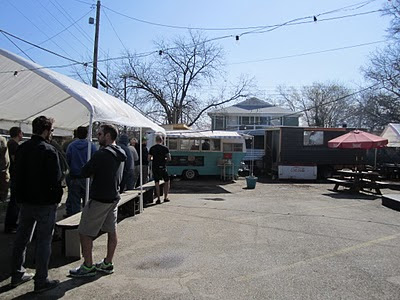 By the time they started serving around 11, the line had tripled.

Now, it goes without saying that waiting in line at Franklin requires a certain amount of patience. Here's the thing though. Those people that show up early, the people who were the first to get there at god-knows-what hour, they got there good and early because they are there to buy a lot of BBQ. Pounds of it. And it takes a long time to cut up all those pounds of brisket, ribs, pulled pork and sausage. 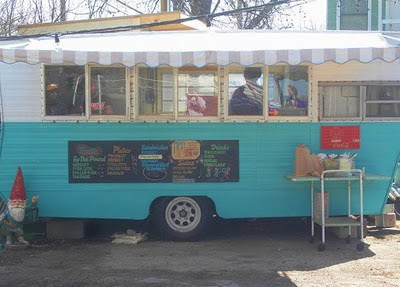 By the time Nick and I made it to the order window, it was already 11:30. Needless to say, we were really ready for some BBQ. And the people at Franklin understand that.

Before he did anything, the guy at the window pulled out a fresh slab o' brisket and cut of a thick chunk of the end bit for Nick and I to nibble on while we ordered. 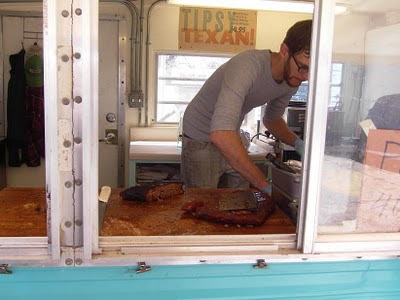 The moment we popped it in our mouths, we knew the wait was worth it.

I'm not a big meat eater, but this brisket was amazing. So tender and flavorful from the thick dry rub that coats each piece. My mouth is watering remembering it.

Nick decided to go with the 2 Meat Plate ($8.75) and ordered brisket and ribs with potato salad and coleslaw. Each plate is topped with 2 pieces of white bread. 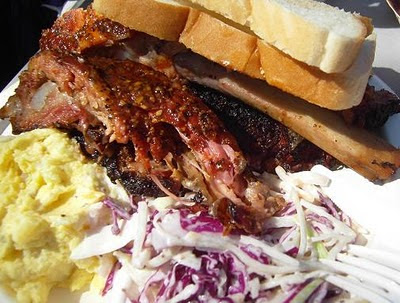 The ribs literally fell off the bone and the brisket was so tender you could separate it with a fork. 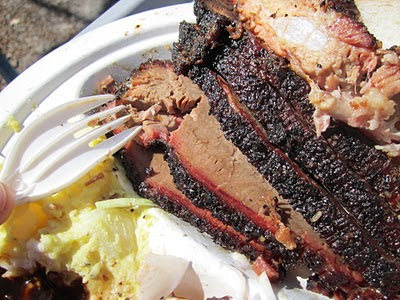 These photos don't really accurately show how much food you're given either. Nick got two huge slabs of ribs and a good amount of brisket too. Even with my help, he couldn't finish it all. Thank god our hotel had a mini fridge. 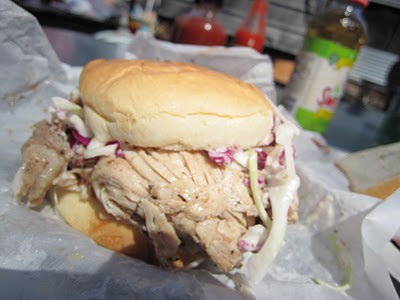 I went with the Pulled Pork Sandwich ($4.75) with a side of baked beans. Does this sandwich look good to you? Because it looks kind of weird to me. Definitely more appetizing after I added some of Franklin's homemade vinegar-based BBQ sauce! The pork itself was juicy and flavorful and the BBQ sauce added just the right bite. So good.

By the time Nick and I had finished our lunch, it was 12:30pm and this sign was already sitting out in front of the Franklin driveway: 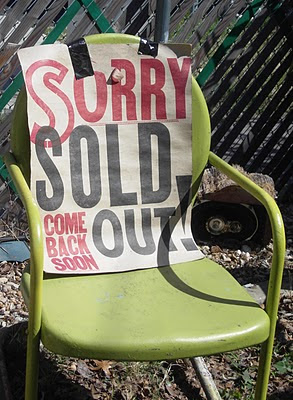 Yep, a mere hour and a half after they opened, Franklin had already run out of BBQ. It's that good. Really.

Full of tasty BBQ, Nick and I made a quick stop at the L.B.J. Library before venturing across the river to the SoCo (South Congress) district. 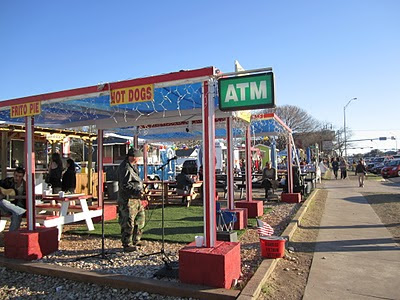 South Congress reminded me a lot of Mississippi St. or Alberta in Portland, but a lot wider and busier. So many cute, quirky shops and lots of little restaurants and bars.

Definitely don't miss Uncommon Objects if you're ever in SoCo. It's an awesome vintage/antique shop where everything is way overpriced but still really cool. (Sapphire and crystal dress clips, you know I wanted to buy you. But you were just too damn expensive.)

SoCo also has a little strip of food trailers. 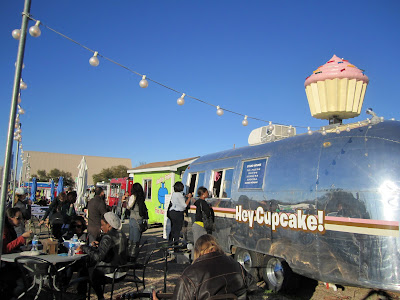 They all looked pretty good, but Nick and I were distracted by this: 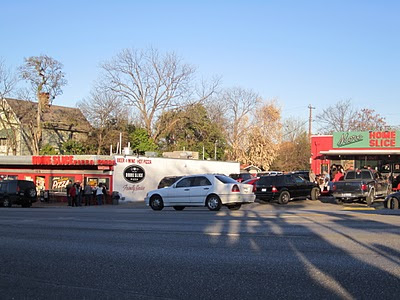 You know if there's a cause for "More Home Slice", that pizza's gotta be good.

Nick and I just wanted a little snack so we headed over to More Home Slice. 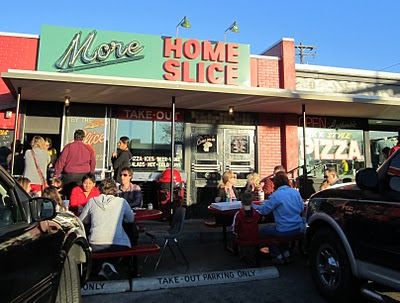 You can order pizza at the window or inside. We took the inside route. 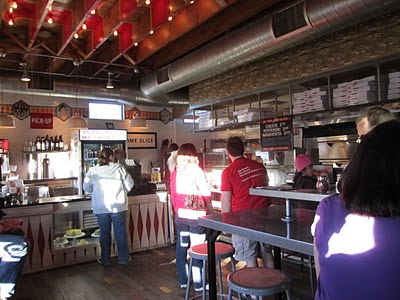 At More Home Slice, your choices of slices are margarita, pepperoni, sausage and then whatever their special of the day is. We went with a Slice of Pepperoni ($3.75). 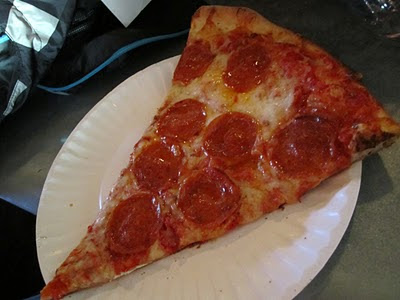 This is some of the best New York-style pizza I've ever had and that's owed mostly to the amazing tomato sauce at Home Slice. Nick and I are both toppings people but we both agreed that we would have enjoyed plain old cheese just as much as the pepperoni because the sauce is really what makes this pizza. It was a pure, fresh tomato sauce- no other spices mucking up it up or trying to steal the show. Delicious.

Also, this was happening: 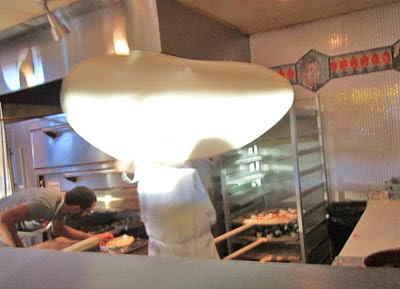 That's some authentic New York pizza for you!

Being the little piggies we are, Nick and I decided that immediately after finishing our pizza, we needed ice cream. 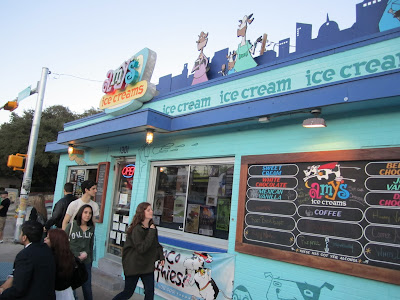 Amy's has locations in Austin, Houston and San Antonio. Each location has seven "standard" flavors accompanied by other daily specials. 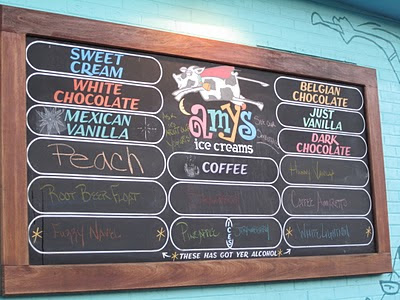 Maybe Nick and I were on a no toppings needed kick after our experience at More Home Slice, but for some reason we both decided to get vanilla ice cream with no mix-ins. 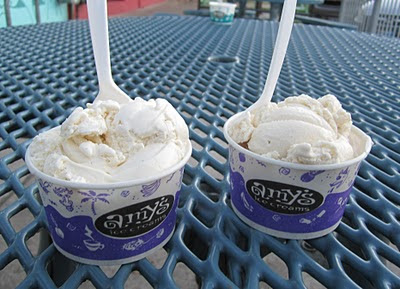 I got Hunny Vanilla and he went with Mexican Vanilla. I really liked the natural sweetness the honey added to my vanilla and Nick liked his Mexican Vanilla even though it tasted a little too much like what other ice cream places might call cake batter ice cream for my taste.

After a bit more wandering, we decided it was time to find somewhere to sit down for a bit. Snack Bar had a nice lounge and some happy hour offerings, so we decided that was the place. 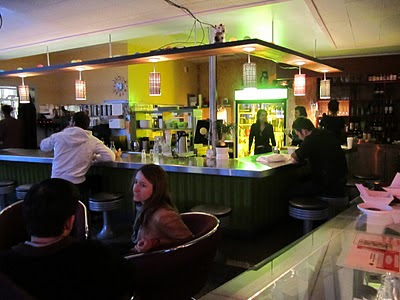 The drinks and food weren't all that spectacular, it did have a nice atmosphere. 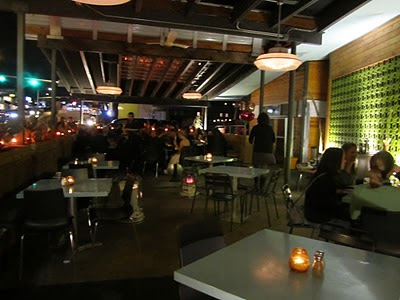 Feeling more refreshed, Nick and I continued our night by walking back over to the E. 6th St. neighborhood in search of something to do.

As luck would have it, we were able to nab sold-out tickets for a showing at Alamo Drafthouse Ritz, a movie theater that also serves food and drinks. 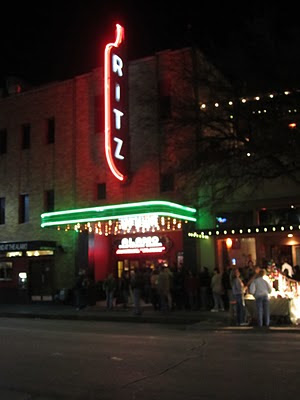 Great way to end our second night in Austin!