I know this is a little late seeing as Mardi Gras has passed, but recently Adam and I got to take a trip down South to New Orleans and I have to share our food and, of course, drink experiences! Adam had to go for work, so I happily decided to tag along. And I am so glad I did. New Orleans is quite possibly my new favorite city and I'm already planning to return!

The city has incredible history, architecture, people, bars, tradition, and...food. Our first experience with a semi-New Orleans native was on our flight from Denver to New Orleans on Thursday (February 24th). Our co-passenger gave us 2 hours of tips. Yep, he just didn't stop. He told us restaurants to go to, bars to check out, bars not to check out, the reputable strip clubs and suggested we call him to use his limo service (we didn't though.)

Friday morning Adam had a presentation then we were off to explore the French Quarter before meeting up with his boss and other conference attendees for dinner. First stop, lunch. 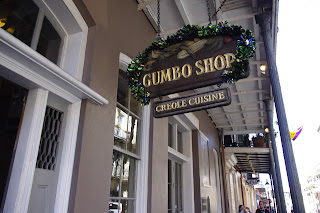 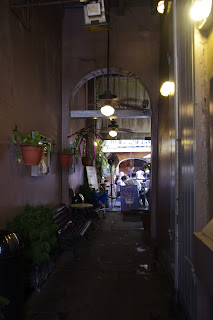 I was so hungry by the time we began walking around (11am) that I needed some food. Plus we were seeing people with drinks so I was feeling behind, but I knew it would be bad to start on an empty stomach. Of course, being in New Orleans, we needed to go somewhere known for their gumbo, jambalaya, and creole. This particular spot was recommended by the man on the plane and the websites I had checked out before our trip. 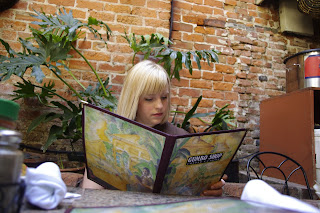 The waitress recommended we start with the alligator sausage, which was awesome! 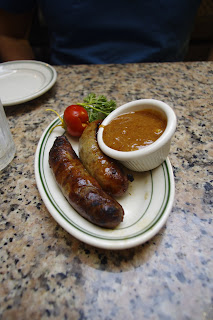 For some reason (cause they live mostly in water?) I was expecting it to be fish-like, but it was more similar to a chicken sausage and I think I liked it more...Definitely worth trying. Even if just for the novelty of it. 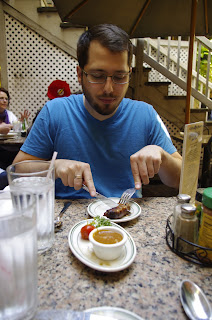 For our main dishes I chose the Shrimp Creole ($12.99) and Adam went with the Chicken Andouille Gumbo ($7.99). These were pretty much what I expected and both very good. 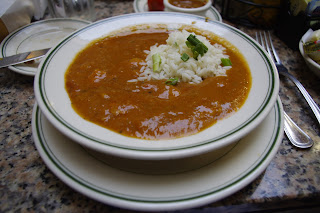 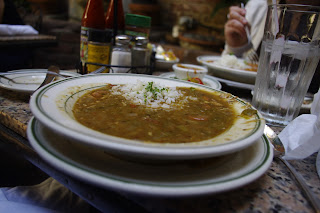 I did find throughout our trip that these aren't the most complex dishes to make and it's such a traditional/common meal that there is no real need to spend a lot of money on them. They're pretty similar anywhere you go. As one man at dinner told us, "It's New Orleans, pretty much everywhere in this city can make a good etouffee, creole, jambalaya..." 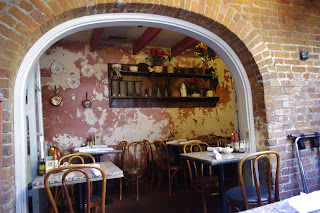 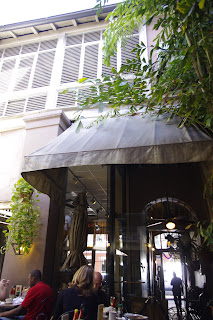 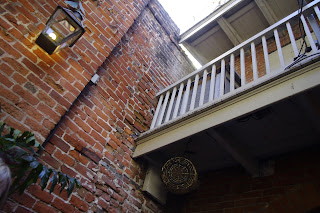 Post lunch, we walked through St. Peter's Square, stopped in a voodoo shop, and wandered back to Bourbon Street where we decided it was time (1:30pm) to have a Hurricane to-go. 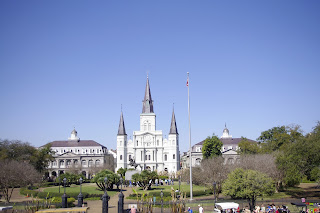 What: Pat O'Brien's
Where (Bar & Piano Lounge): 718 St. Peter
Where (Restaurant & Bar): 624 Bourbon St.
Honey's Heart: Their flaming fountain on the back patio! 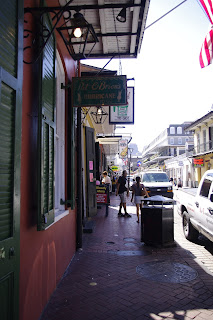 There are many places to get drinks to go on Bourbon Street, but we chose Pat O'Brien's since it's famous for their Hurricane. In 1933 Pat O'Brien turned his speakeasy into a legitimate bar after prohibition. In the post-prohibition times, whiskey, scotch and bourbon were hard to come by, so in order to get even the smallest quantities of those, liquor salesmen required bar owners to purchase large quantities (50+ cases) of the more readily available liquor: rum. In order to deal with these large quantities of rum, bartenders created the ever so popular Hurricane. 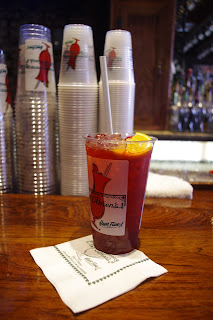 Also offering a dueling piano bar and a fountain that is lit on fire at night, this bar is not only a long time establishment for the regulars, but now a tourist hot spot. We definitely ended up here Saturday night also (it's where we found some foreign friends.) 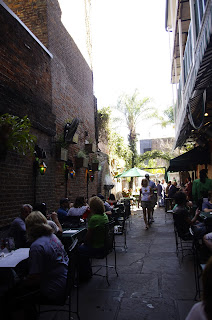 Now I wouldn't say it was my favorite drink ever, I don't particularly like rum or sweet drinks, but I did like that it has 4 shots in it and one drink got me pretty tipsy! 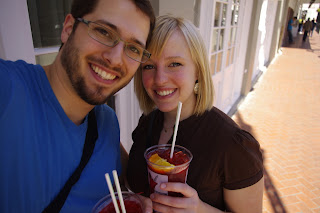 Next on our agenda was a nap, then a work dinner.

What: GW Fins
Where: 808 Bienville St.
Honey's Heart: A bottle of wine to go at the end of dinner!

GW Fins is also located in the French Quarter and known for their seafood. This dinner is a little harder to review since it was a pre-selected menu with limited choices, no pricing, and I'm not even sure the items are on their regular menu, which changes regularly anyway so I suppose it doesn't matter!

Our appetizers were followed by a salad and then the choice of a steak, scallop or chicken main dish. Adam chose the steak and I chose the scallops, perfect selections so we could share. The steak was alright, but nothing compared to our dinner the next night (coming up in New Orleans, LA Part 2) and the scallops were good, but coming from the NW it's hard to beat some of the seafood I've had in Seattle and Portland.

Finally we were served a bread pudding-esque dessert which I wasn't a fan of and already too full for anyway! Of course this whole time wine glasses were being refilled regularly.

Bonus: There was an unfinished bottle of red at the end of dinner and the waiter stuck a cork in it, put it in a plastic bag, and sent it home with Adam and I. Thanks!