Istanbul was truly like no other place I have ever been before. 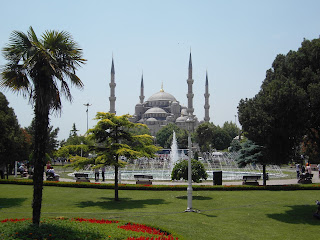 And while the sights and sounds of the city are what I'll remember most (particularly the call to prayer blasting from every mosque and the uncut Ottoman rubies and emeralds the size of apricots a Topkapi Palace), Nick and I also had some very enjoyable dining experiences while in Istanbul.

It was very hot that day and so you shouldn't be surprised that our very first taste of Istanbul came in the form of Turkish ice cream, or dondurma. Dondurma is very different from American ice cream or even gelato in that it is very stretchy and sticky. 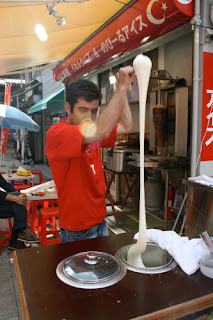 This constancy makes it very easy for ice cream men to play tricks on unsuspecting tourists like me. The servers use a long metal rod with a flat paddle at the end to pull up the ice cream and press it onto the cones. 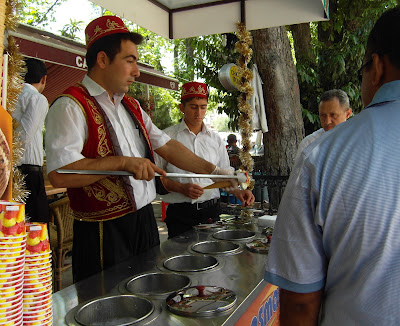 This guy liked to do a little trick where he would pass me an ice cream cone using his rod, only to pull the ice cream off the top of the cone with the rod, leaving me holding an empty cone. This happened enough times for a small crowd to gather around the stand to laugh at my misfortune before he finally decided I had earned my cone, ice cream and all. Here's what the finished product looked like: 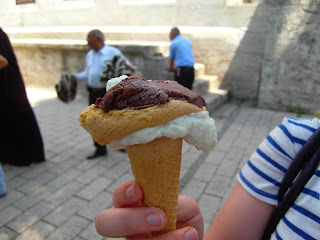 I was expecting the ice cream to be chewy because it was so stretchy, but the consistency was actually pretty smooth and more like gelato once it hit my mouth. Unlike gelato, however, I had no desire for two cones in one day. The flavors (vanilla, caramel and chocolate) were a little off from what I was expecting and, for some reason, the thought of how stretchy the ice cream could be made me a little queasy. Good thing Nick and I were sharing so I could pass our cone off to him to finish.

For lunch, we ate at a little restaurant somewhere in the vast Grand Bazaar. 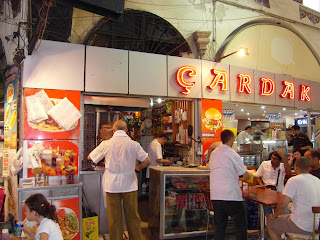 Our waiter seemed to speak English well so I asked him what his favorite item on the menu was. This confused him a lot but he ended up pointing to the "meat roll." This turned out to be a large tortilla rolled with tomatoes, french fries and some sort of unidentifiable but tasty meat. (Ok, so it doesn't look that great in the picture below, but it was good, promise.) We also ordered some freshly squeezed orange juice, which apparently is huge in Turkey as there were orange juice stands everywhere. 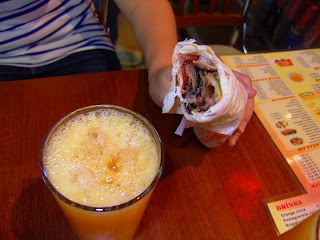 After lunch, we headed to the Spice Bazaar, where I received my favorite salutation of the trip. 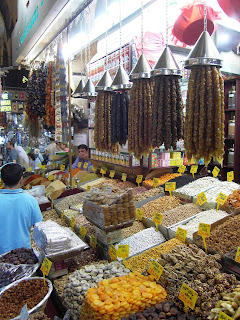 While I was taking the picture above, I noticed that the clerks (you can see one in the blue polo) were all elbowing each other. After I put my camera down, one of the brave ones came up to me and said "Hello, beautiful angels." Love it.

Turkish delight was everywhere at the Spice Bazaar, and like anyone who has read The Lion, The Witch and The Wardrobe, Nick and I were eager to try some samples. Too bad I'm allergic to pistachios though (sad, right?) because they are a main ingredient in most turkish delight. I ended up sampling some sad-looking candy similar to turkish delight but it was tasteless and boring I just know the real thing has to be so much better.

Our last stop before heading back to the ship was at one of the many corn-on-the-cob stands. The corn is either steamed or grilled. Nick and I went the grilled route. 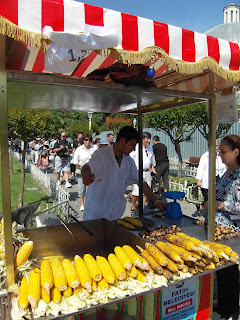 Tasty, but I swear, Turkish corn is like 10 times more sticky and hard to get out of your teeth than American corn. Maybe that was just Nick and me though.

And now, some more pictures from Istanbul!

But first, did you see this Monday's episode of The Bachelorette? If you didn't, watch some of that too. We didn't have time to go to a Turkish bath or to the Bascilica Cistern so it was cool to watch them go to those places on the show, though I was kind of disappointed I didn't get to see them in person. 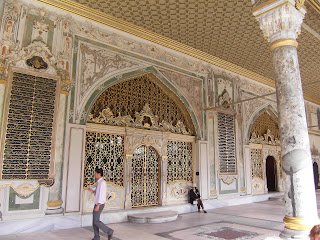 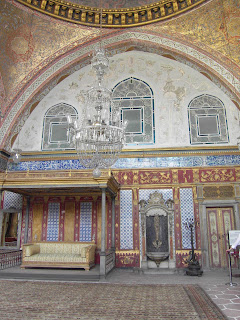 One of the Harem rooms in the Palace 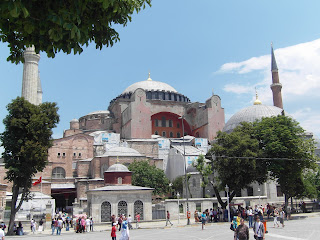 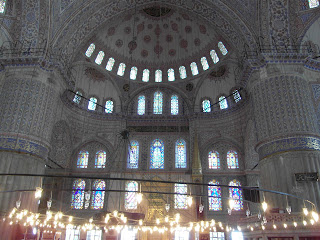 Inside the Blue Mosque (the first picture in this post is the outside)
Coming up next: Nick and I drink too much wine and argue over whether our Athens tour guide will get fired by her company. (Yeah, no Kusadasi post. All I ate there was a Magnum Gold?! bar, and you already know about those.)
Posted by Kelly at 8:41 PM