One of my favorite weekend pastimes has essentially become wandering around Boston, and while I could lie and say that my walks are spent admiring architecture and the like, really, it's all about the food. I generally come home from my explorations with at least a few ideas of places I'd like to try when I have the time, but my favorite types of finds are, you guessed it, happy hours.

A couple of weekends ago I happened past KO Prime and just about stopped in my tracks when I saw their sandwich board sign proclaiming "$5 drink of the day!" Now, I'd never been to KO Prime but it's one of the those places that you can tell thinks of itself as pretty ritzy, so I was surprised to see that they were offering such a low-priced cocktail. My delight doubled when I saw that the other side of the sign read "$2 and $5 KO Prime Time Bites." Nice!

When my book publicity class was canceled a week or so ago, the roomie and I thought it would be the perfect opportunity to meet for happy hour after work.


This was our server. His name is Asher.

At first I think he was a little miffed because Shannon forgot her wallet at work and had to run back and get it. But he perked up when I mentioned the blog and volunteered to pose for pictures. Now that's some good customer service...

Shannon and I both ordered the drink of the day, a raspberry Tom Collins. I liked the sound of it more than I liked the taste of it since it reminded me a little too much of raspberry jello. Also I was expecting it to be pink. 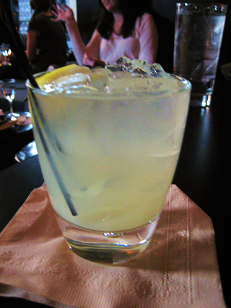 As far as food, Shannon went with the calamari ($5), which she said was good. 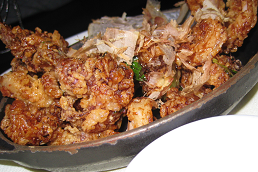 I asked Asher which of the other $5 bites he would recommend and he said the pulled chicken slider with crunchy onions, housemade pickles and BBQ sauce was good. He was right. 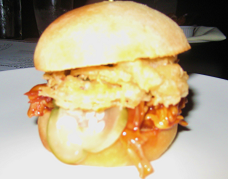 The chicken with BBQ sauce by itself was not too exciting, but with the addition of the crunchy and flavorful onions and pickles, the chicken slider makes for a tasty sandwich.

A warning though, the slider is pretty darn small for $5, as are the other bites. That means that KO Prime Time is more of a snacking happy hour and not so much a dinner option.
Posted by Kelly at 8:36 PM