My 23rd birthday was a few weekends ago which might have been a pretty sad event thanks to the lack of girlfriends in Boston situation (working on it...), but luckily Nick was in town and he took me out. I had done a little sleuthing and Drink kept coming up again and again as one of the best bars in Boston. That sounded good to me so we silver-lined it to the waterfront. Drink is kind of tricky to find because there's no big sign and it's actually underneath another bar, but its not too hard to spot if you know where you're going.

So the deal with Drink is that they have 3 different sections to the bar: 1800s, prohibition era, and modern. Nick and I grabbed the first open seat at the bar and that happened to be in the 1800s section. There are no cocktail menus at Drink, you simply a) already know what you want and order that or b) tell the bartender what you like and she will whip up something pretty amazing. At least that's what happened to us.

Nick and I were lucky enough to be served by Josey Packard, a bartender known for her hard shake (it's impressive, believe us) and her love and knowledge of classic cocktails. Over the course of the evening, we learned that Josey bartended in San Francisco at Alembic Bar before returning to Boston to work at Drink. Too bad for SF because Josey makes a mean drink and we were happy to take advantage of her skills.

My new go-to when I'm not feeling like being cheap is a lemon drop, otherwise it's a vodka tonic for me. I explained this to Josey and she said that gin is really just favored vodka and that makes it infinitely superior to the plain old stuff that I usually drink. Though I've had gin before and not really liked it, I gave Josey the benefit of the doubt and she whipped me up a Pegu (gin, cointreau, lime juice, bitters) Not the best drink I've ever had but pretty darn good.

For round two I mentioned that I also like mojitos. Josey recommended a Southside (basically a mojito with gin). Absolutely delicious.

Probably should have stopped there because not only does Josey make a tasty drink, she makes a strong one, but it was my birthday so I figured why not? Josey suggested a champagne cocktail to mark the occasion and poured me a French 45 (champagne, gin, blue curacao). Very elegant, very good. That one definitely sent me over the edge though. 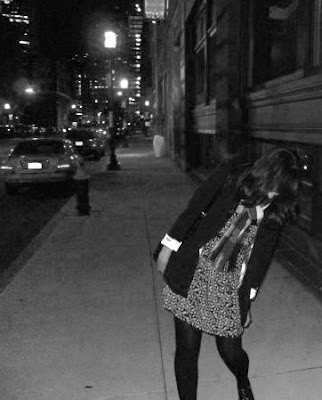 All and all, Nick and I had a great time and I think we owe that to Josey because she not only poured a good drink but was also friendly and fun to chat with.

I'm planning on going back to Drink and trying the prohibition and modern sections, though I think I'll probably be tempted to head to Josey's section again because she's just so damn good at what she does.
Posted by Kelly at 8:51 AM