A sad thing has been happening and it's probably the worst part of graduating (besides the whole job search thing). It's time for everyone get started on their post-college adventures and for many of our friends, that means moving away from Portland.

Leslie is headed the farthest away of any of us (Korea!) and Kelly, Dena, and I will not see her again for a year at least. We started our last girl's night at Mint, incredibly appropriate given that it's our official spot (sill not regulars though...). After some sweet potato fries, uber-spicy Caesar salads, and some drinks, we decided that surely at least one more round was in order before we called it a night.
Leslie had never experienced the wonder of the fishbowl drinks at Gypsy, so we headed to 21st despite our worry that 4 people were needed to order a bowl and we were now down to a party of 3. That, however, turned out to be the least of our worries as the bartenders at Gypsy refused to serve me because of my ID. Now I understand that having a Portland address on a California license is a bit odd, but let's be honest here, who would actually try to pull that off on a fake ID? That business is real!

But they didn't believe me, so it was off to try our luck somewhere else. The first bar we saw was North 45 Pub so in we went. North 45 is very cozy and they have one of the those walls of liquor where the bartender has to climb up on a ladder to reach everything. We ordered a round of margaritas, made some new friends, and, since it was Leslie's last night, ordered a few more. You can imagine, then, why the late night happy hour menu become extremely tempting as soon as the clock hit 11pm and the option of mac n cheese and sliders was suddenly available. Now I can't really vouch for the quality of the food here (damn those margaritas) but I do remember that we cleaned those plates...so take that as you will. 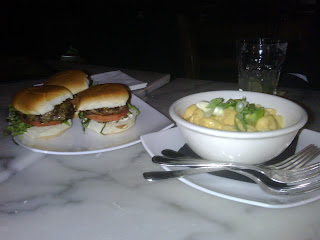 We'll miss you Leslie...and maybe since you're going to miss us too, you'll actually read our blog!