I went to Capri when I was on my Italy trip in high school and while I remembered that the island was very beautiful, my main memory was of the amazing gelateria that I found there (surprise, surprise).

I had been chattering to Nick probably nonstop about how we HAD to go back, so imagine my disappointment when I found out that our day-long tour of Sorrento, Pompeii, and Capri would not end in Capri like we thought, but would instead start there. Would my gelateria even be open?!?

Luckily for us, it was! And even though we were probably the only people on the island eating gelato at 10am, it was definitely worth the odd stares we got as the gelato was just as good as I remembered. 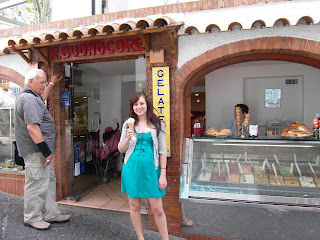 I was worried that I might not be able to find my way back to R. Buonocore, but, not only is it on the main drag, the delectable scent of the freshly-made cones makes this gelateria hard to miss.

True to form, I got stracciatella while Nick tried the equivalant of mint chocolate chip. Glamour shot necessary: 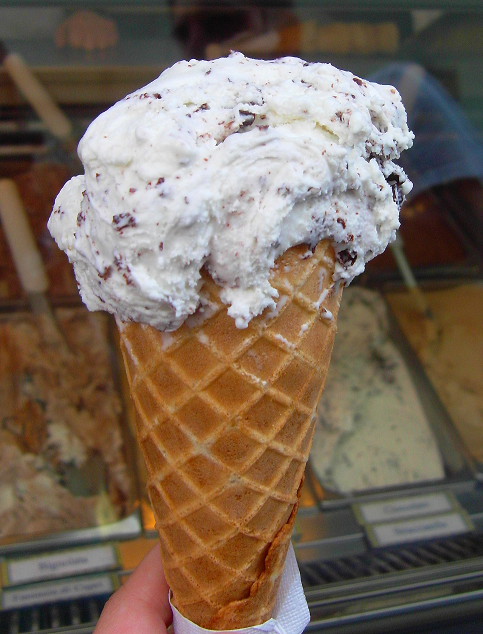 Believe it or not, R. Buonocore's gelato is not Capri's only culinary delight. Both Capri and Sorrento are known for their limoncello, a lemon liqueur. Nick and I tried samples of some cheap limoncello at a souvenir store and it was horrible, but I have a feeling that if you got the good stuff, it would be pretty enjoyable. 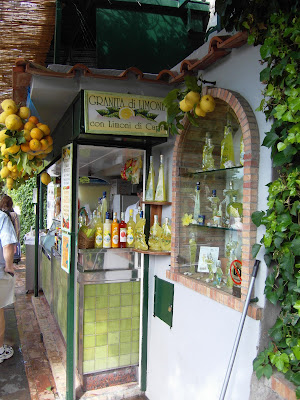 Limoncello is traditionally made with humongous Sorrento lemons (see them hanging in the photo above?), but if you want to make your own limoncello, regular lemons will do just fine. Here's Giada De Laurentiis's very simple recipe. Thinking I might try it out after my lavender infusion is ready...

Anyway, as it turned out, the gelato on Capri was the food highlight of the day. Our tour-sponsored group lunch in Sorrento was pretty nasty and the lemon soda that Nick tried in Pompeii was barely potable. Oh well...at least I got my gelato!


Up next: I discover moussaka on the very picturesque Mykonos
Posted by Kelly at 6:51 PM