A few weekends ago I was challenged with a rare task: plan an evening out for Doug and me. Because Doug usually does the planning I was definitely feeling the pressure, but I was also excited to plan an evening in which breweries or beer play no part. (I love beer, I do- but a girl needs a little variety now and again.)

Teote caught my eye a few months ago when Portland Monthly posted a slideshow featuring the restaurant and I've seen it pop up several other places too, including on Eater's recently-updated HeatMap. Seemed like a safe enough choice. 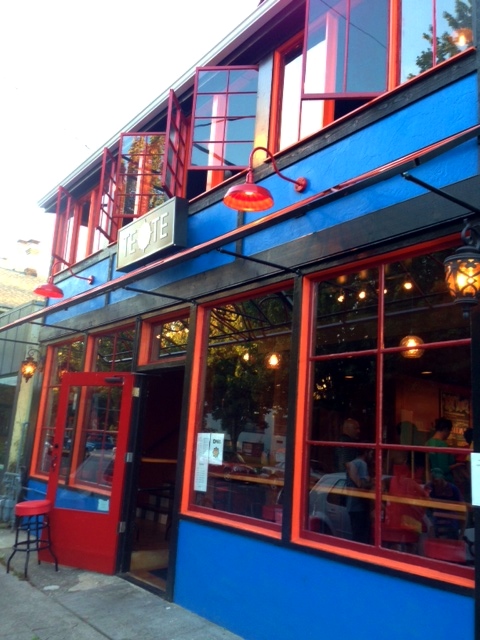 Teote serves Latin America street food with an emphasis on gluten-free arepas (corn cakes) with various fillings. They offer counter service only, and we were greeted with a pretty decent line when we arrived on a Friday around 7pm. The line definitely didn't move as fast as, say, Por Que No's or Bollywood Theater's but I appreciated that servers walked down the line taking drink orders so our cocktails were waiting for us when we got up to the register to place our food order.

We both decided on spiked Agua Frescas: Watermelon Lime with Rum for Doug and Blackberry Sage with Vodka for me. Refreshing! 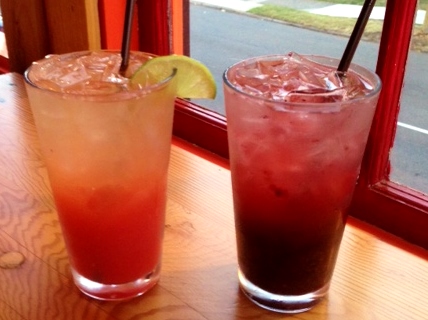 Teote's food menu offers a number of appetizer plates like Fried Plantains ($6) and Masa Fritas ($6), but Doug and I decided to stick with their specialty: arepas.

There were 9 different arepas to choose from, so we had a hard time narrowing down our choices. Doug eventually went for the Pabellon ($6), made with shredded flank steak sautéed with peppers and topped with black beans, verde sauce, plantain red chili sauce and queso. That's it below on the right. 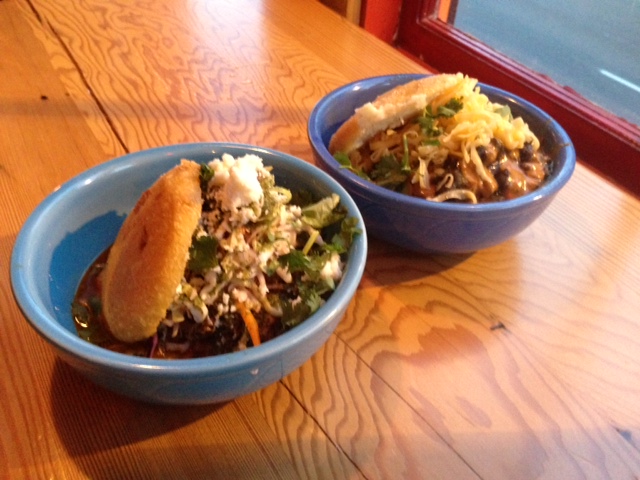 I choose the Pernil ($6), made with braised pork roast in a Morita chili sauce, cabbage salad, verde sauce and queso.

Doug definitely won this round. The arepas are served in bowls because there's a lot of sauce going on and for Doug's dish, that felt right. It was basically Teote's take on chili and the crunchy corn arepa was the perfect substitute for what I consider a necessary chili accompaniment: cornbread. This would be the perfect dish for a cold, rainy night.

My dish was much less satisfying. Compared to the bold comforting flavors of Doug's dish, my pork arepa felt bland and a bit uninspired. The sauce was also much thinner than Doug's which meant that the bottom half of my arepa got soggy real quick, and not in a good way

We might be back... but with Lardo and PBJ's so close, it might be hard to drag Doug to Teote when two of our favorites are right there, and that's probably okay with me.