Last Saturday night, the roomie and I met up with Katie H, Anna, and Anna's friend Jason for sushi at Douzo.

At first, Shannon and I were a little worried that our meal would cost more than we hoped because Douzo has some pretty intense "modern" decor going on and attracts a well-dressed, 40ish crowd. However, once we opened the menu, we happy to find that the prices were reasonable, with basic maki running in the $6-$8 range. 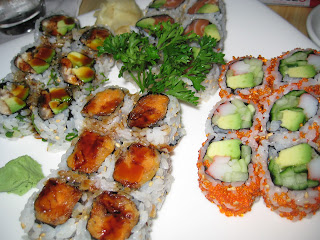 The first two were great. Shannon had never had eel before so I was glad that her first experience was a good one. And really, how can you go wrong combining sweet potatoes and tempura?

The California and Alaska rolls, however, did not live up to my expectations. I've had many a California roll in my day, and these just had a weird lingering flavor that I didn't recognize. Not good. The Alaskan roll would have been fine if Shannon and I liked smoked salmon...but we don't. Now we'll know for next time that if Douzo doesn't mention whether their salmon is smoked or not, it very well might be.

Anna, Katie, and Jason ordered some maki too, which they all liked. Jason also tried out the delicious-looking crispy shrimp with creamy spicy sauce. 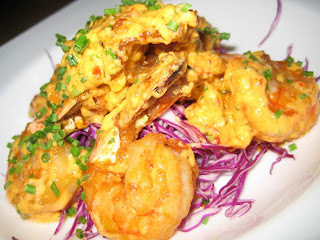 Now I love sushi, but it's not exactly something that fills me up so I suggested that we get some dessert before we called it a night. Anna and Jason had never been to Finale so we headed there. Great way to end a fun night out with friends.