My friend Mary and I have been training for the Portland Marathon as American Cancer Society Charity Runners. It has been a lot of work but we haven't done anything too serious for our training (I mean other than going on 20+ mile runs) until September when we decided it was time to be healthier with the marathon only a month away (October 4th). September officially became known as "Sober September" and we have decided not to drink for the entire month. Initially I allowed this to put a cramp in my happy hour style, but then I remembered I can go to happy hour and not drink!

Tonight Adam and I hit up a popular after work happy hour located on the corner of Everett and 13th, Bluehour. Looking at the regular menu we almost thought against it knowing that on our limited income we definitely couldn't afford to eat in the restaurant, but we decided to brave the happy hour and hoped they had some good deals. Turns out they do!

To begin Adam ordered a drink. He almost went for a beer, but living vicariously through him I convinced him to order a $6 martini special. He chose the Fresh Summer, which combined vodka, lemon juice, and honey. We both wished there had been a little more lemon and a little less honey. 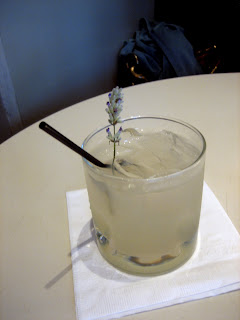 The food menu included about 15 items ranging from $1 to $5. Adam and I chose a $2 vegetable slider with zucchini, red peppers and pesto. This was our fav! A $3 ceasar salad was next. Great dressing and croutons. 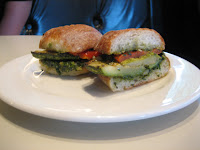 When we first sat down Adam spotted the $5 burger so we decided to share that as well, and a little $2 goat cheese fonduta. Both were great, and the burger even came with fries.

Bluehour offers great happy hour food and prices to match. I would definitely recommend it and will be going back once "Sober September" is over so I can try one of their many other cocktail options!