Guest Post by Doug (@douglasfranz/@firstedbrew)
---
One of Katie's and my favorite parts of the holiday season is Portland’s Holiday Ale Festival. For three years now, we’ve buddled up and battled the crowds at this festive beer event that always manages to be one of the highlights of our imbibing year. 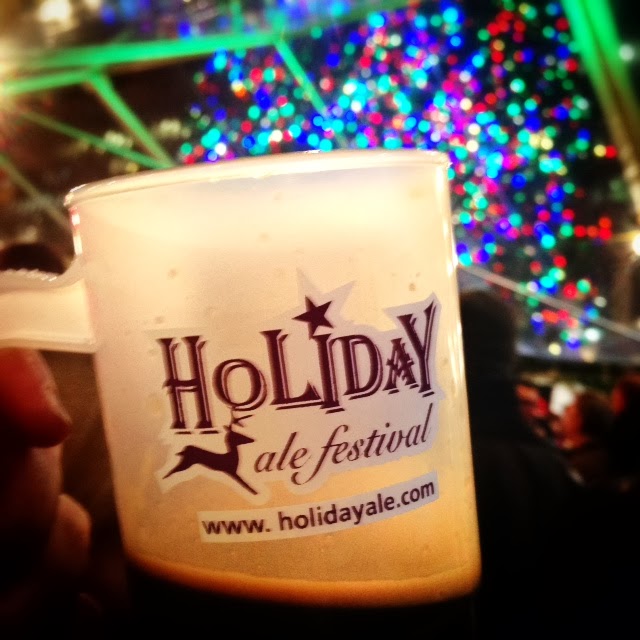 Katie and I checked out the 2013 version of the festival last night and it did not disappoint. With over 40 beers on tap, there can be an overwhelming selection of barleywines, stouts, porters, and generally big beers,but lucky for you, we took good notes and have a few recommendations if you are heading to down to Pioneer Square this weekend. While we weren’t able to try all the beers, we came pretty close. Here are the 5 you cannot miss!

Cherry Diesel- Cascade Brewing
The best beer of the night. I made sure to go back twice for this one and it was worth it. Known for its amazing barrel aging program, Cascade created a beer that smells like one of their legendary cherry sours but tastes like a deep sweet chocolate stout, full of vanilla and cherry notes. A bit of a bourbon burn and linger of dark chocolate to remind the drinker just how good this brew was.

High West Whiskey Barrel-Aged Cappuccino Stout- Lagunitas Brewing Co.
Coming in at 12.5% ABV, the highest percentage of all the selections at this year’s festival, this stout has amazingly balanced flavors of whiskey and coffee. Lagunita’s caffeinated entry is a good way to wake yourself up when you start feeling a little sluggish after all those dark holiday beers.

Gargantua- Eel River Brewing Co. Of the five on the list, this one got the most mixed reviews from our group. Yes, you have to LOVE vanilla to like this beer and it was a little bit on the sweet side. But this is a beer fest for holiday beer lovers and sometimes the best way to celebrate the season is with a brew that makes you feel like you are drinking a delicious dessert.

McGuinness- Natian Brewery
We all had one last ticket to use for the eve and I had already tried everything on my pre-fest ‘Must Taste’ list when this one caught my eye. Natian, a very small brewery based in the Burnside/Lloyd part of Portland that you rarely see on tap, managed to really nail what a holiday beer should be. Flavors of coffee and Kahlua, nutty, and oh so smooth.

Spiced Unicorn Milk- Stone Brewing Co.
San Diego’s finest, Stone created this just for Portland’s Holiday Ale Festival and I personally want to thank them because this was an amazing beer. It was one of the most complex but accessible beers of the night. It was like drinking chai chocolate milk.
There are plenty others that were tasty too, so pull out your best ugly sweater and head down to the Holiday Ale Festival this weekend!
Posted by Katie @ Happy Hour Honeys at 2:14 PM